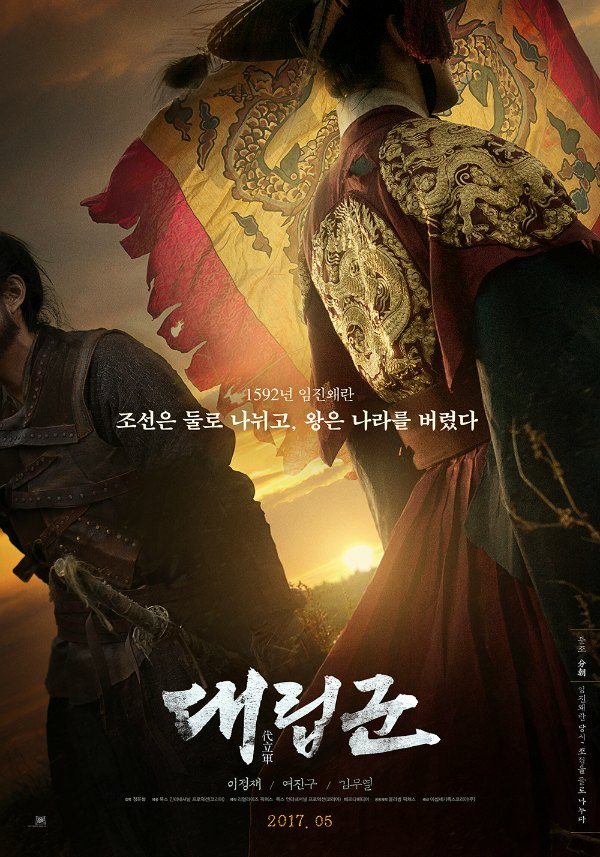 Yeo Jin-gu (Jackpot) has played more than his fair share of Joseon kings, but I don’t think I’ll ever grow tired of it. I’m especially excited for the premiere of his upcoming historical action film Warriors of the Dawn, in which he plays a young 18-year-old Gwanghaegun who’s just been abandoned by his king and left behind to lead his country in the middle of a war.

The film from director Jung Yoon-chul (A Man Who Was Superman, Marathon) begins in 1592 at the start of the Imjin War, as King Seonjo abandoned the capital and left the fate of his war-torn nation in the hands of newly appointed crown prince Gwanghae. Troops were so scarce at the time that commoners were paid to fill the ranks, and in this movie, Gwanghae and this peasant militia led by Lee Jung-jae (Operation Chromite) find that they are both stand-ins for the real king and the real army, but they’re the ones fighting on the front lines. The main posters say: “Joseon is divided, and the king has abandoned the nation,” and “We fought in their stead to survive.”

Lee Jung-jae plays To-woo, the leader of a troop of commoners who fight because it’s their only means of survival. His character poster reads: “Even if the country is destroyed, our fate does not change!” Kim Mu-yeol (My Beautiful Bride, Northern Limit Line) plays the army’s ace sharpshooter who distrusts Lee Jung-jae’s alliance with Gwanghae, and his poster reads: “What have you done for us that you ask us to put our lives on the line!”

On Gwanghae’s side, we have Esom (My Little Brother, Like for Likes) who plays the prince’s faithful doctor. Her poster reads: “He must become a good king.” Bae Soo-bin (Memories of the Sword) is the prince’s bodyguard, and he sounds like the loyal-but-humorless type. His poster says: “If his majesty is harmed, none of you will be able to avoid a beheading!” Does he know it’s a war?

The trailer opens as Seonjo flees to the north and the capital is devastated by invading Japanese troops. Gwanghae says in voiceover, “It is not my fate to be king. I never wanted to be king in the first place,” which is the same thing written on his character poster. To-woo (Lee Jung-jae) leads his troops into battle as he cries, “Even if the heavens abandon us, we cannot abandon ourselves!” The captions say, “The people who joined their fates with the king. Each of them had a name.” At the very end, To-woo asks, “Do you still not want to be king?” and Gwanghae asks in turn, “Do you want to become one of my people?”

This is definitely a case where casting Yeo Jin-gu to play your young, vulnerable king immediately puts me on his side, no questions asked. I mean, do you see the stills of him piggybacking the elderly and crying on the battlefield? Prepare your tissues. You have been warned.

Warriors of the Dawn hits theaters May 31. 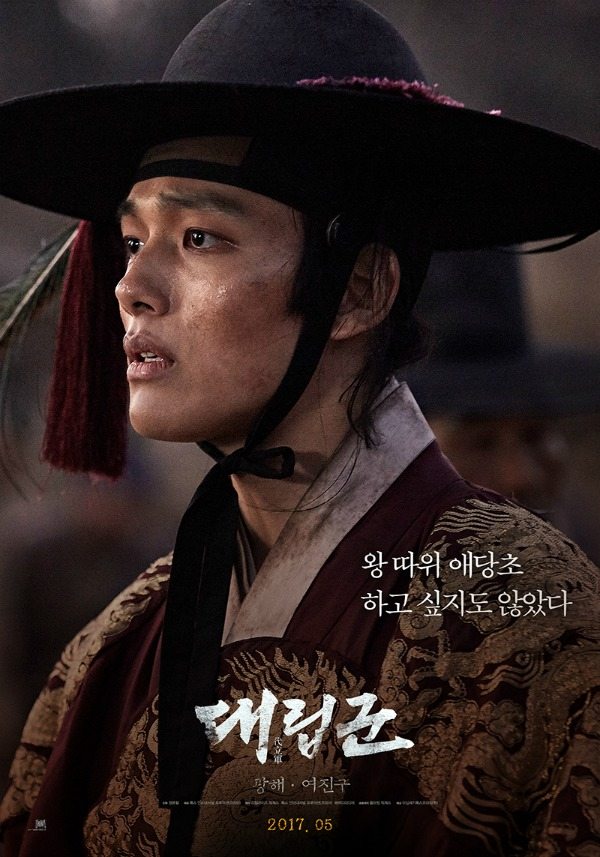 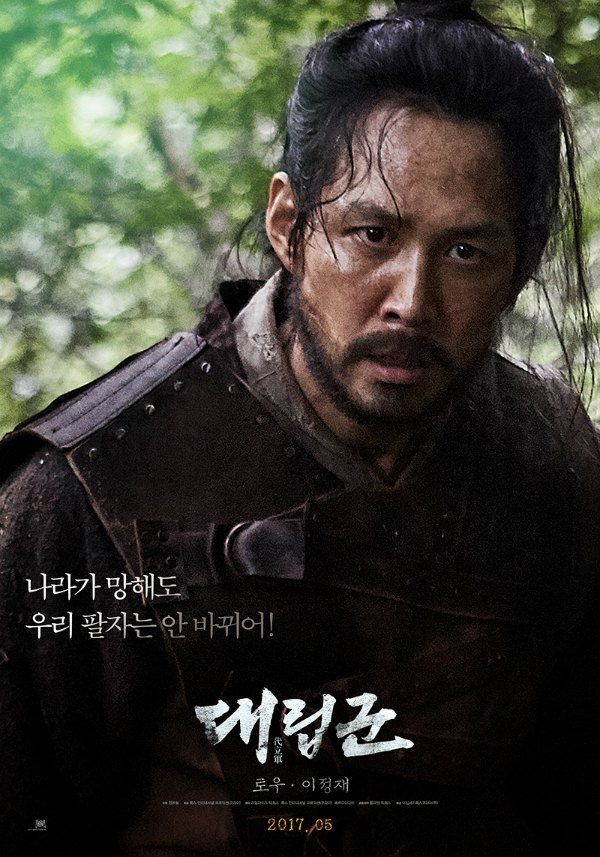 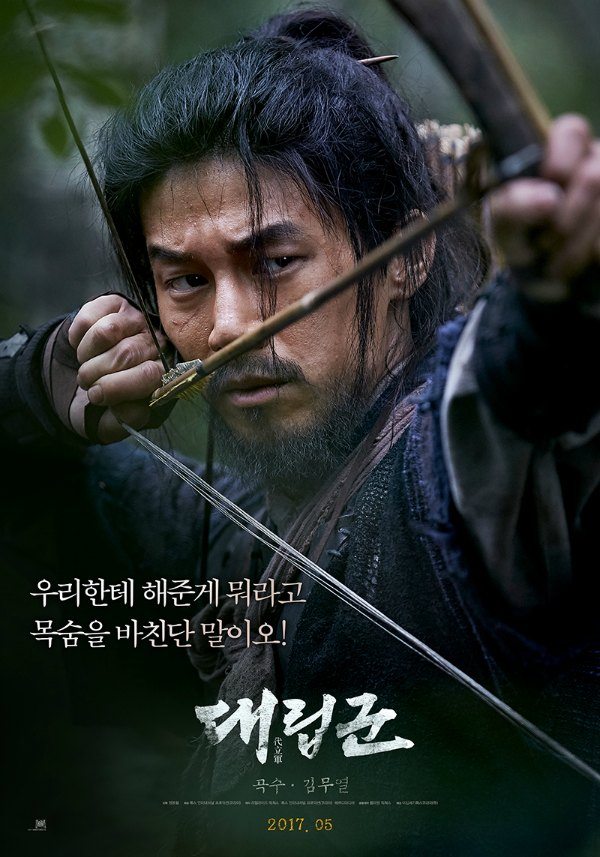 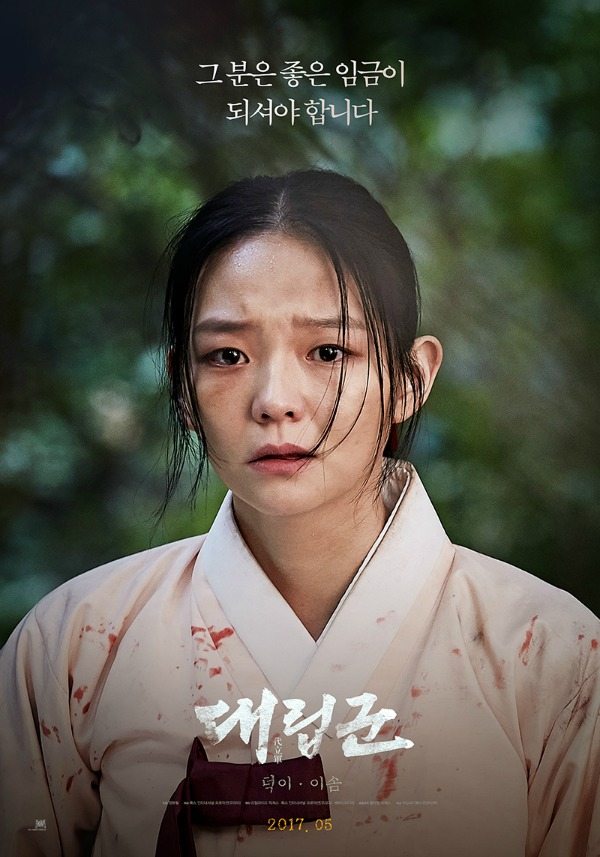 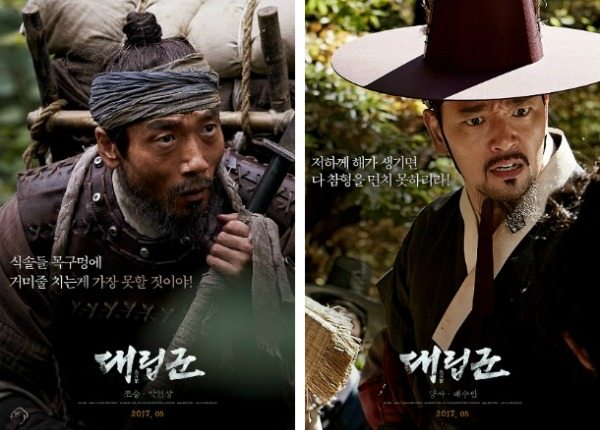 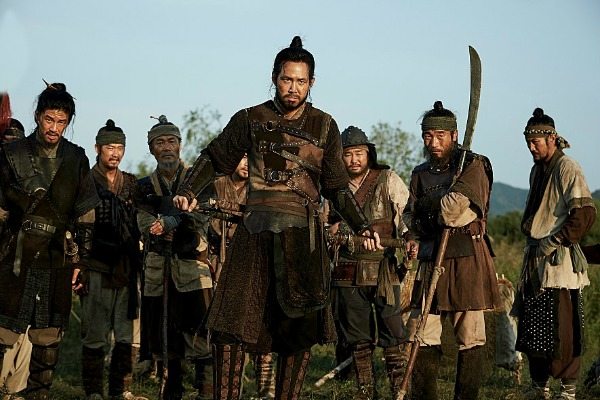 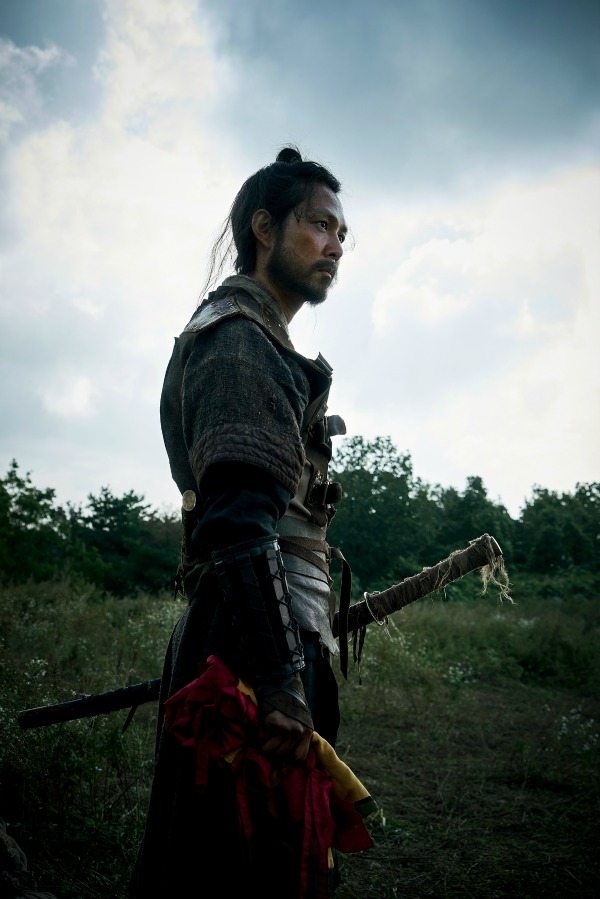 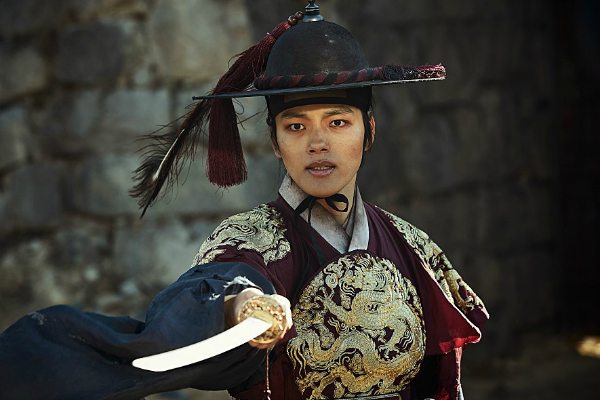 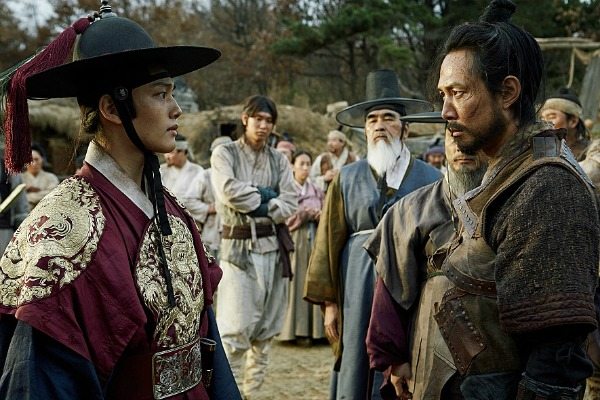 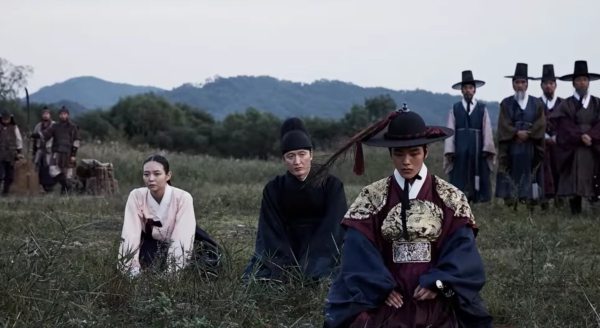 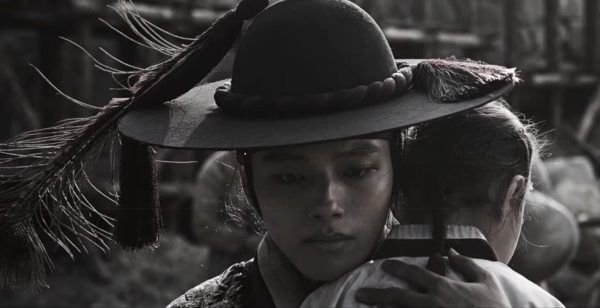 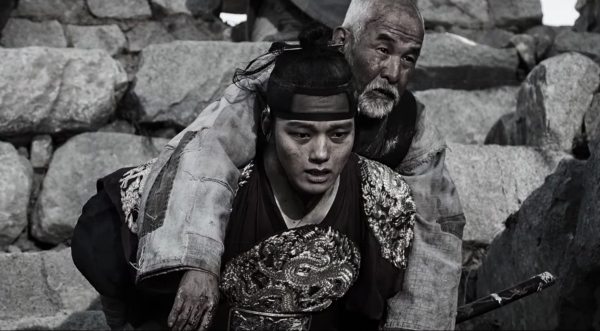 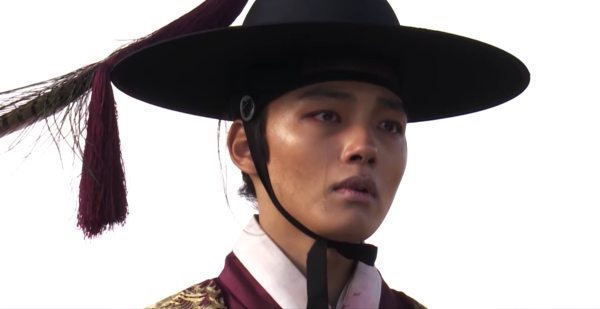 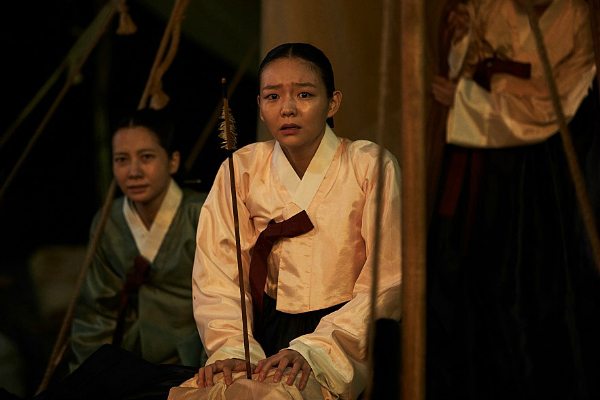 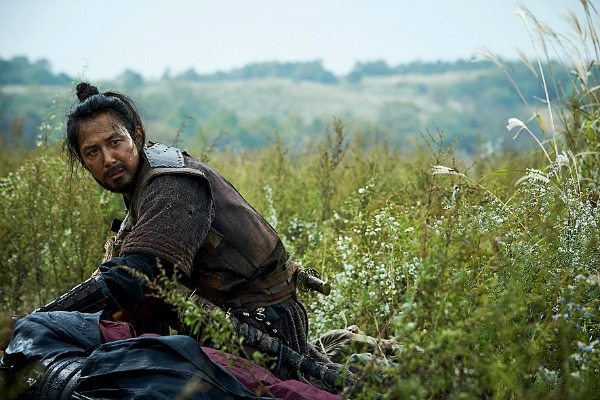 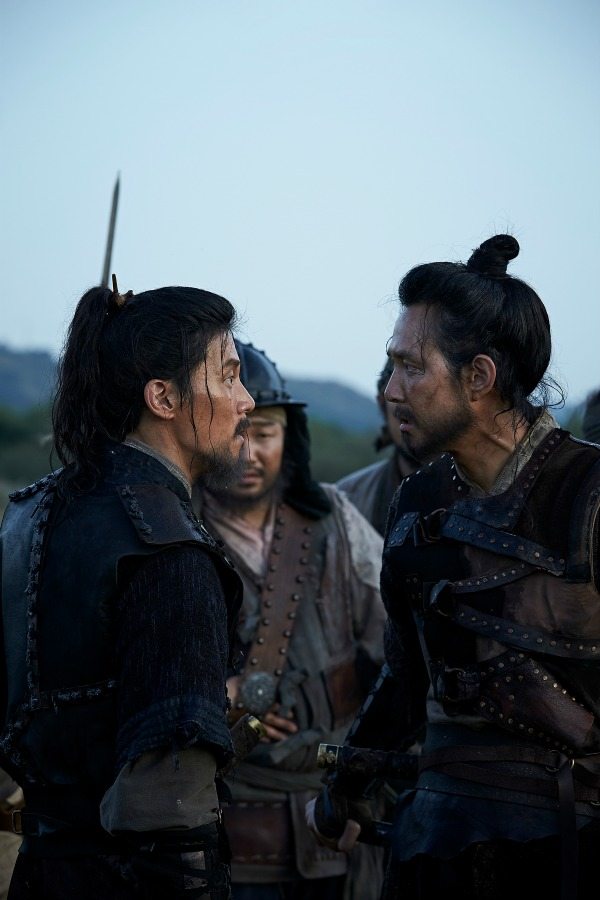 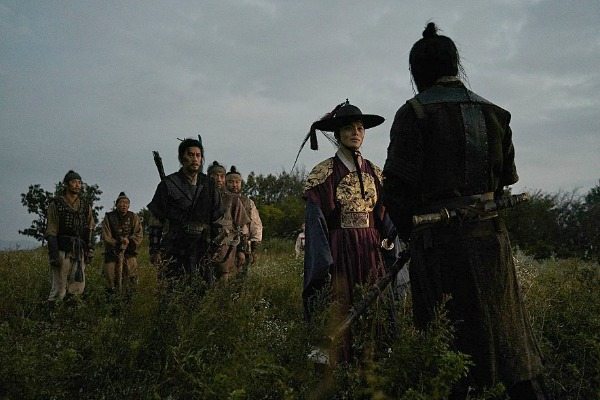 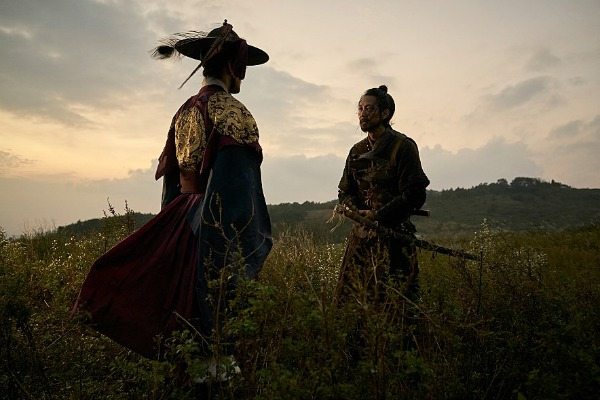 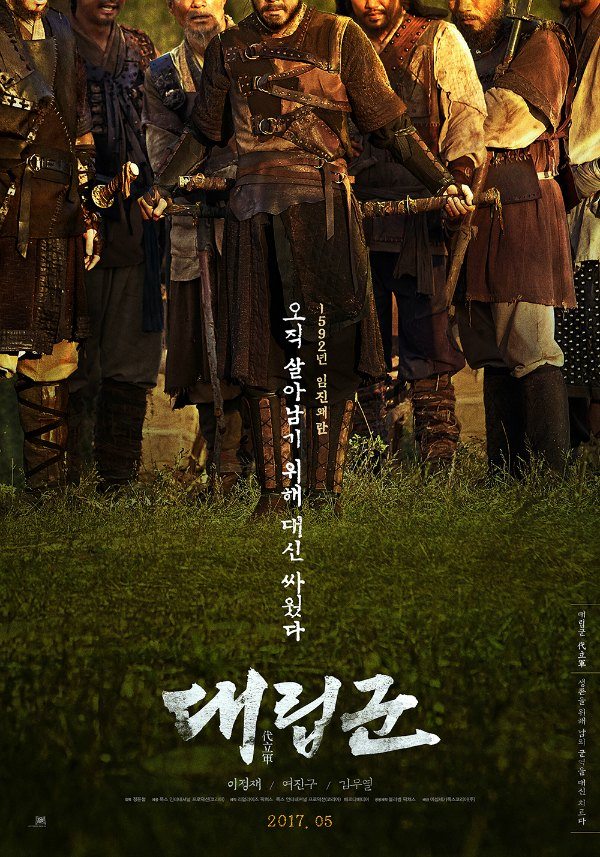 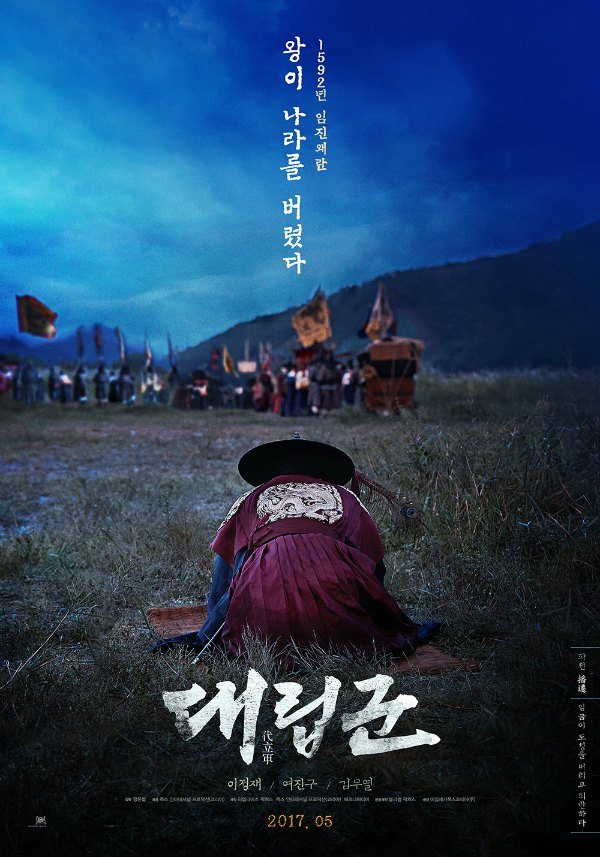 I rarely rarely watch movies but damn Yeo Jin Gu looks fine in sageuk wear all the time. ? I really liked him in Jackpot, even if that show was so hard to get through.

I fell in love with him in Jackpot--the first I'd ever seen of him. Totally thought he was at least 30 years old in it, and then realized he was only 18 and had to beg God to forgive me of my lustfulness. LOL.

the nuna-thirst for yeo jingu is nearly unreal :)

Koreans have this running joke about him that his full name is Yeo Jingoo Oppa ?

Yeah, me too. Sometimes I feel so guilty crushing over an 18 yo but I hold to Ahn Yoona's words " If you're handsome, you're my oppa". Will always be thankful to her for rationalising this LOL.

the posters are awesome. especially the last 2 :)

That couldn't be more true. I watched him in Hwayi and the tears just kept falling. It's a dark film. Tearjerker

Awesome movie. I think the first place I saw him was Moon Embracing the Sun. He was only in the first few eps, but wow... I know he's been acting since he was very young, and he fabulous. I knew I was a little bit overboard when I recognized his voice in the two seconds he spoke in the movie Tazza (the one with TOP), hahahaha! Okay, crazy lady rant ending.

So true. They are beautiful.

Excited as always for the talented Yeo Jin-gu <3.

I'll be stalking my local theatre for this.

Loved Bae Soo Bin in Dong Yi. He is a good actor.

He was gorgeous in Jumong.

Love BSB in sageuks. Hope the movie does well.

I do too. I think he was history major in college.

Hoping for success. He needs breakout role and enjoy his fame like Kim Soo Hyun.

He looks so great in those red robes and I love the posters!

OMG an article for Warriors of the Dawn! Thank you, girlfriday~ I've been sooo excited for this movie ever since Yeo Jingoo's casting has been announced. It's gonna be one hell of an awesome May for me with this and Circle!!!

LOL IKR ? That is why I immediately thought of the posters from this movie when the teaser posters for Ruler of the Mask came out..

Even the mood for many of the posters between the two projects are similar too. Make me wonder whether they were done by the same person/ people.

*is similar
(because I'm a grammar nazi)

Thanks, girlfriday, for this report. It flew under my radar, and now it's on my to-watch list. The posters and stills look terrific. ;-)

Gwanghaegun and Choi Young became two of my favorite figures in Korean history when I learned how they held the fort after the king and the rest of the court skipped town during the Imjin War. Thank you for the introductions, THE KING'S FACE.

The trailer gave me chills oooooo

Those posters are absolutely stunning. It's amazing how a simple posted can portray such emotion and feelings.

I totally agree. Most of the posters didn't have much editing involved compared to typical movie posters and they all look like taken from movie still cuts instead of being actual poster photoshoot. I love the simplicity of it all and yet it manages to capture the emotions and degree of the message they want to convey.

Just like in the last poster where the tagline says "The King has abandoned his country." And you could see Yeo Jingoo still bowing in respect to his escaping father who basically left him to his death sentence. Gah it just felt so intense. T_T

Lee Jung Jae and Yeo Jin Gu are two of my favorites... This historical event has been depicted in several Korean dramas and films. This one looks awesome. Looks like a wonderful cast. Yeo Jin Gu has really developed from a child actor into an amazing adult actor. Can't wait to see it.

I first saw Yeo Jin Gu in "Moon Embracing The Sun" and man did i love this guy. Ever since, i became his fan and iam up for any drama he's in.
And this show seems promising. I have to say, Yeo Jin Gu looks good in seguk dramas which is why (presumably) "Orange Marmalade" had two parts. Don't you think?

YJG and LJJ are both amazing. I have a soft spot for YJG just watching him grow up in his roles. No doubt he'd slay this one as a young king, and he is always awesome in sageuk. Love the posters!

I loved this actor when he was a boy, especially I was impressed with his interpretation of "Missing you" and "Giant"
I had great expectations for when he would grow up, but "Orange Marmalade" and "Jackpot" disappointed me.
I hope this new drama will bring me to appreciate Yeo Jin-gu again.

Can't wait till it comes out... Yeo Jin GU

Ooo I liked Seo in guk's portrayal of Gwanghaegun in the King's Face, even though the drama itself made me want to rip my hair out. Would be interesting to see how Jin goo plays the character.

This looks amazing! That first poster is seriously breathtaking. Anyone know where korean movies can be found with eng sub? I'm not sure if drama subbing sites also do movies.

I certainly don't want to wait for very long to be able to see this in the US. I'm willing to pay for a movie ticket if they would show it in my area! *prayer circle*

i can't see My Beautiful Banker thru all that sweat and straggly mane...
: (

Wow that last poster though... It's so melancholy, yet something about it is so enchanting...... :D

I'll watch this for yeo jin goo and bae soo bin..two a list actors in my book..

Wow, those are some beautiful posters

Wow, the stills and posters look awesome, now the movie just has to live up to them^^

Oh my gosh, this looks absolutely incredible. The character design has been done with so much care and love, and the characters seem beautifully three-dimensional from the one-liners. And Yeo Jin-gu + Esom is a stellar combination. Hope it doesn't let down.

this looks so good