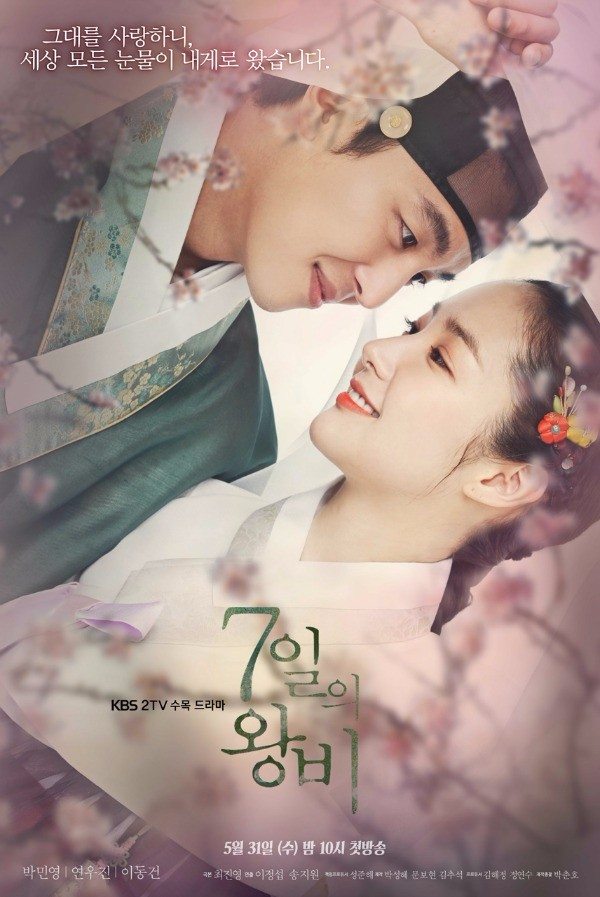 Just when I thought there couldn’t possibly be more pretty to add to my anticipation for this drama, KBS comes out and proves me wrong by releasing more teasers and posters for sageuk Seven Day Queen, starring Park Min-young (Remember–Son’s War) as the titular Queen Dangyeong.

They feature her complicated and painful relationships with her suitors, Yeon Woo-jin (Introverted Boss), who plays Prince Yi Yeok (later King Jungjong), and Lee Dong-gun (Laurel Tree Tailors), who plays King Yeonsangun. In a political battle between half-brothers, she becomes caught between the two, and eventually ends up its greatest victim.

The catchphrases in the latest posters of Seven Day Queen indicate the tragic conclusion of the love story between Queen Dangyeong (born Lady Shin Chae-kyung) and Prince Yi Yeok. Despite being his first consort, she was deposed in a mere seven days because of her father’s loyalty to the previous king, Yeonsangun.

The first poster shows the two young lovebirds smiling at each other, but the text tells that this happiness may not last for long: “Because I loved you, all the world’s tears came to me.” The second, while equally beautiful, shows our main characters with more somber expressions, and the tagline reads, “If I am born again… I hope to never meet you.” 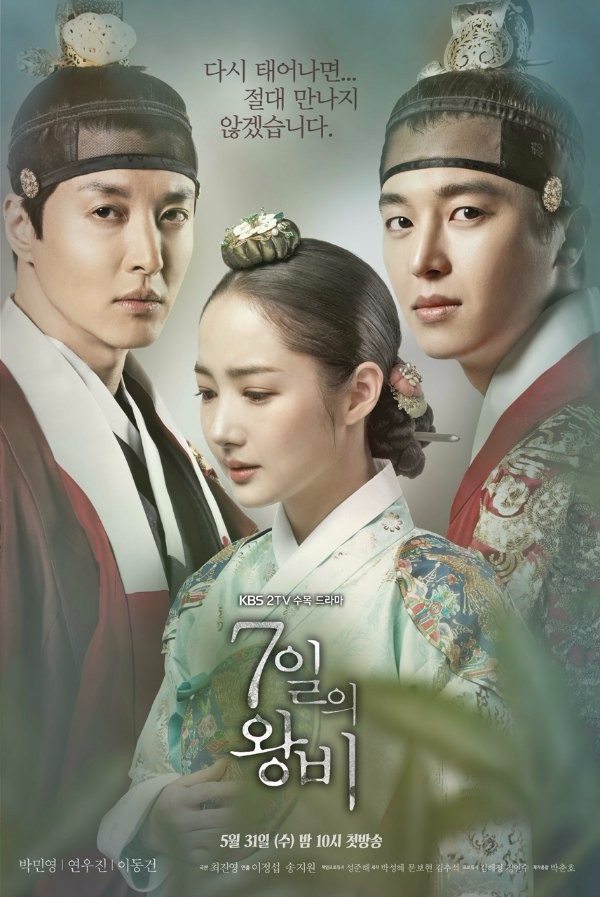 The first teaser begins with the adult versions of Chae-kyung and Yeok, who look like they’re longing for each other while being apart. In his internal monologue, Yeok vows, “You [Chae-kyung] woke me. I will take over the world for you.”

Then we flash to an earlier time, where one of Yeonsangun’s courtiers reveals that the dying wishes of the former king were written in a secret document. The alarm on his face suggests that these final words were not in Yeonsangun’s favor, and he strikes a deal with Chae-kyung’s father: “Will you become [Prince Yeok’s] father-in-law?”

Then Yeonsangun eyes his brother, thinking of Yeok’s promise to remain complacent as the king’s younger brother, thinking how Yeok will have to do everything to prove his loyalty. The teaser ends on the adolescent versions of Chae-kyung and Yeok in a pre-marriage meeting with their parents. He shouts, “I will never marry this girl!” and he storms out of the room, but Chae-kyung resolves to enchant the prince with her cute charms.

The second teaser begins with the same scene, but this time Chae-kyung stays and says that she’s completely willing to marry him and her parents gasp at her forwardness. She finds him later and slowly comes closer, asking, “If one is born, should one not fulfill one’s purpose in life?”

Later, a carefree Yeok rides on the shoulders of two of his friends, yelling, “Everyone follow me!” But Yeonsangun’s paranoid mind takes this harmless act as a challenge to his authority and almost cuts his brother’s throat. Instead of death, however, it’s exile for the prince, and a tearful Chae-kyung asks him, “Do you have to leave?” And then we make a complete circle back to the adult Yeok, who declares: “I will return. Wait for me, Chae-kyung.”

Whew, that was a lot of background plot in two teasers. Now we know that what began their fated union—the close relationship between Chae-kyung’s father and Yeonsangun—may also be what breaks it in the end. While I want to keep hope that they will have more than seven happy days together, the teasers and posters have heartbreaking messages, making me suspect that the drama will stick closer to the painful ending written in history. 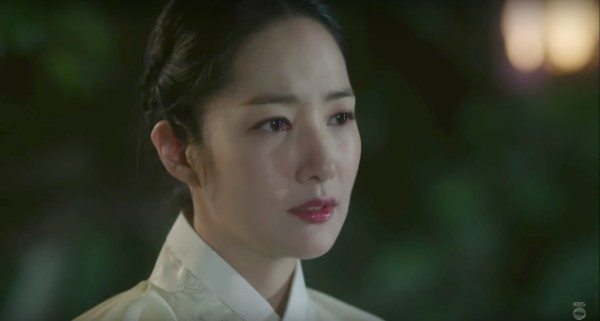 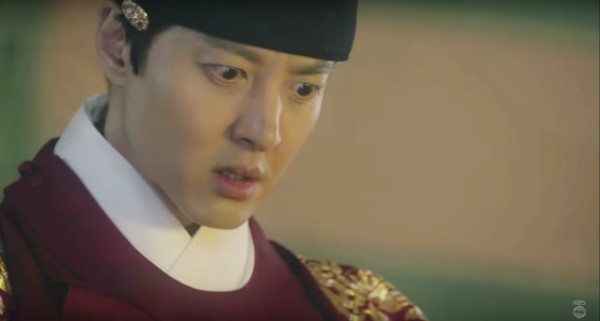 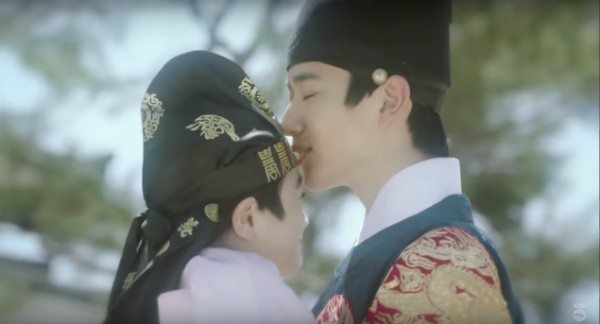 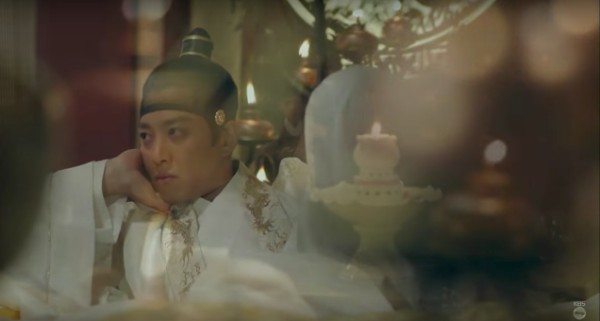 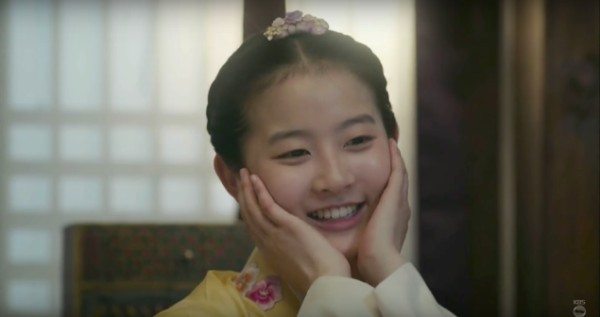 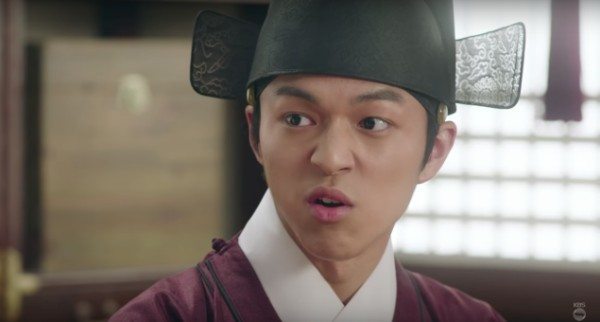 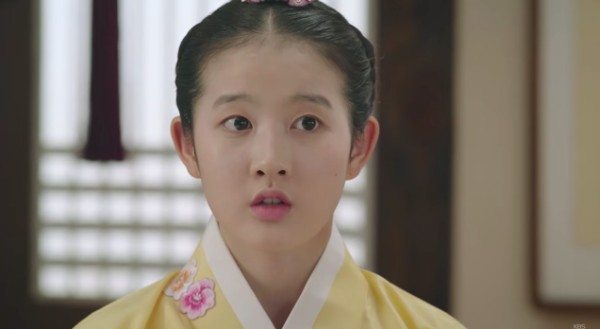 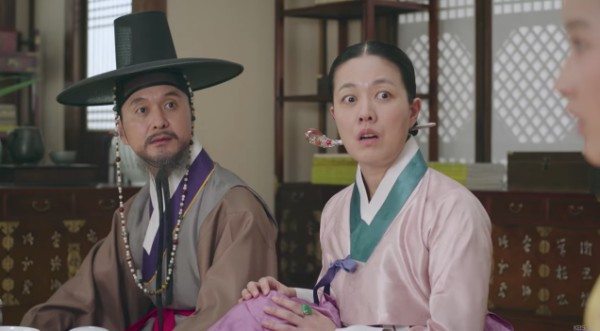 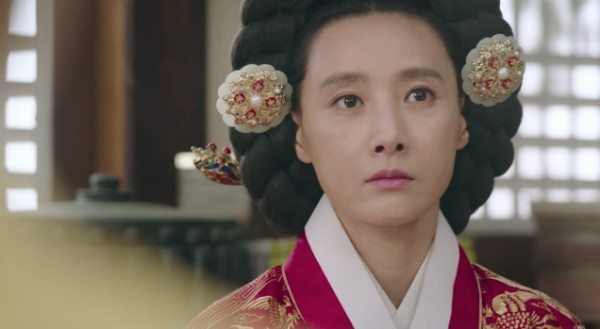 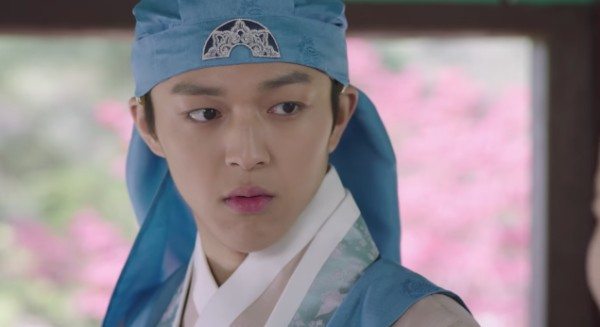 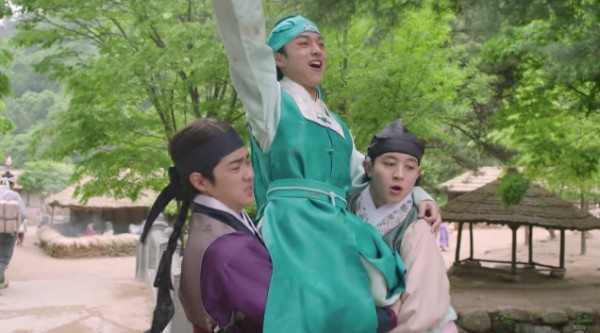 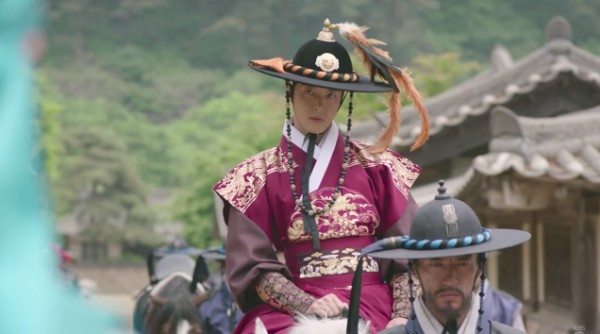 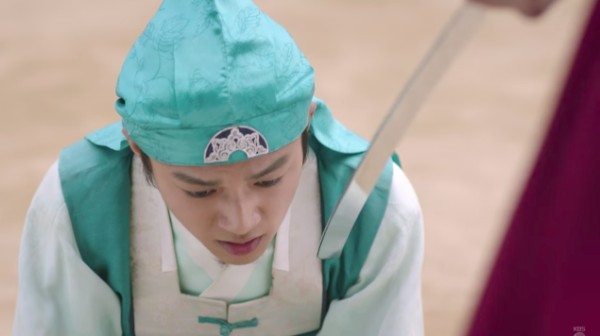 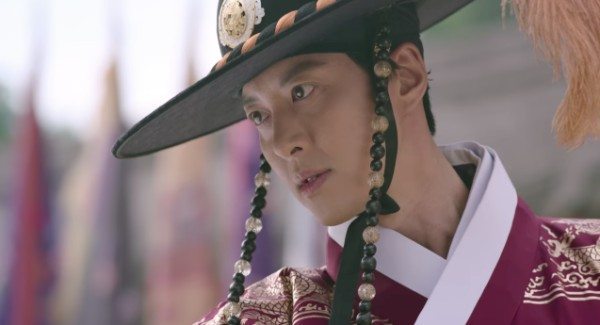 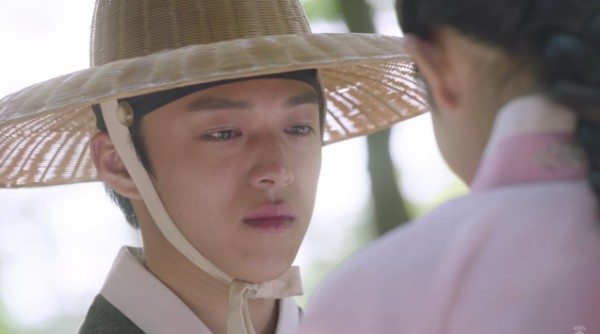 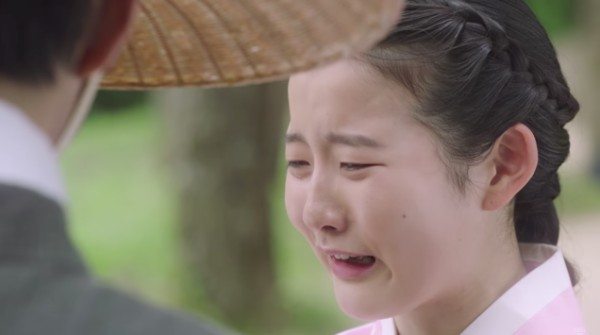 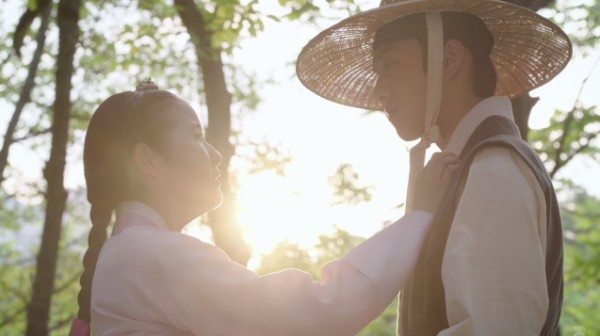 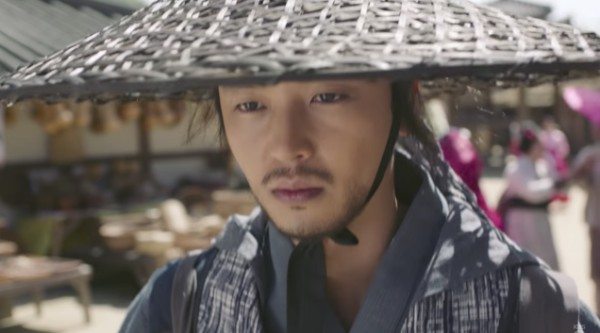 Why do they want to trick me with these gorgeous pretty posters when I know it's all going to be tears and pain. T____T

IKR? We all know what's gonna happen. Buckets of tears coming up!

Oooh.. I see Little Moo-hyul and Little Yeon-hee (from SFD). I'm still on the fence whether or not to add this to my watching roster, since I'm fresh off Rebel and don't really want to watch another Yeonsangun so soon.

Visually, this is a treat for the eyes. The cinematography looks great.

Sideways poster really is the thing nowadays. Not that I'm complaining because its too pretty. I miss Yeon Woo-jin already! I sat through the other drama because of him.

Very pretty posters for what looks like a heartwrenching drama! Am i ready for this?

SO pretty. Whoever is in charge for the promo material for this drama is doing a great job... and it is rare I ever say that about any drama lol. So many posters and teasers are pretty same-old but these are really pretty.

That last image, he looks so much like Lee Bang Ji from Six Flying Dragons.

I'm so excited for this! KBS's promo department should be given a reward vacation for doing such an awesome job.

I'm loving that Chaekyung knows what she wants and goes for it (*ahem* him). Of course, we'll probably see that spirit being crushed as she's torn between her husband and her family, but I'm willing to sit through all the angst and pain so long as it's as beautifully rendered as the promos suggest.

I can't wait to watch another sageuk after Rebel !

4 more days to go! I hope we get to see Park Min-young and Yeon Woo-jin's courtship, instead of just their teen counterpart. I'm hoping for the cute before the heart wrenching part comes!

These stills are so beautiful and I know I've said this many times in different comments. However, this time, the heartbreaking messages on it add so much more tragedy to this already sad show. Being me, I'm still excited but cautiously preparing my heart (just in case it gets shattered). I loved Park Min Young in Healer so I'm on board.

Although it's a sageuk, I hope we have a strong heroine character. I believe in collaboration between Healer PD and PMY!

I don't expect much on rating, but with this pretty promo I hope Koreans are interested and at least want to check the premiere next week. For me, this promo is really tempting as well as raising my expectations!

Is it just me or everyone's doing the sideways poster these days...

Not just you! It's getting a little ridiculous now. I want to see Yeon Woo Jin and Park Min Young's beautiful faces without tilting my head.

It's so beautiful and melancholic at the same time!!!!

Thanks, tineybeanie, for another set of beautiful images for SEVEN DAY QUEEN. I'm anticipating a tearfest if it follows history, which I hope it does. The interesting part will be how the story is told, especially the characterizations.

I've been waiting for Yeon Woo-jin to act in another sageuk since ARANG.

The posters are so pretty. Everything about this looks so beautiful including our OTP.

I'm so excited for this! I've waited and waited for an epic, historical romance since the wonderful The Princess' Man. Gorgeous directing and cinematography, excellent cast, reliable talented director and a deep and heart wrenching love story? I'm sold. It's going to hurt so bad but so good!

This director is usually good with women's roles in his drama so I hope we can have a strong female heroine too.

The girl playing teenage Park Min Young/ Shin Chae-kyung is so cute! Loving how forthright her character is. I noticed she is disguised as a boy in one of the scenes too which is a nice throwback to Park Min Young's role in Sungkyunkwan Scandal!

I swear Lee Dong Gun looks the same as when he was in Sweet 18. lol

I wasn't sure about this because I'm not currently in the mood for tears, but the prettiness is tempting me.

I really disappointed with Ruler. I expecting this drama.

The childhood portion looks really good. Sigh. It's like all sageuk. It draws you in with a good sageuk portion, and then wrings you out afterwards.

I might try this for the cast. I don't care much for tragic stories, but as long as it's a good sageuk, I can be fine with it.

Totally lovely. I haven't watched sageuk in a while. I tried going back with Hwarang, but the story just isn't that compelling for me. With these teasers, I think it will be a lot better. Here's to hoping it will be awesome!

ohhh, the other trailer was so cute and sweet (with her falling flat on her face and him joining her on the ground)... and now these...

but i MUST WATCH, as i love these two and i can see much chemistry between them already - heartbreaking or not... it will be beautiful, tender and sweet! and then heartbreaking, but... i believe it will be worth it!
*sniffs in anticipation*

YWJ, PMY and LDG are so good in the sageuk garbs.
Those prettiness would surely knot and twist my heart thousand time or more. But, duh, how can I stay away of this promising heart wrenching and torturous drama? *stocking tissues*

I've always had a soft spot for her. I think she has a very naturally bright face (I don't mean surgery-less, of course, it's not a physical quality).

I'm confused. Not sure whether I wanna/should watch this. I hate melo, really really hate sad-ending drama. But the teasers...give such interesting feels. And Park Min Young is so gorgeous.

The poster is pretty but is confusing me. It looks like a rom-com / romance poster, but the title screams tragedy. :D