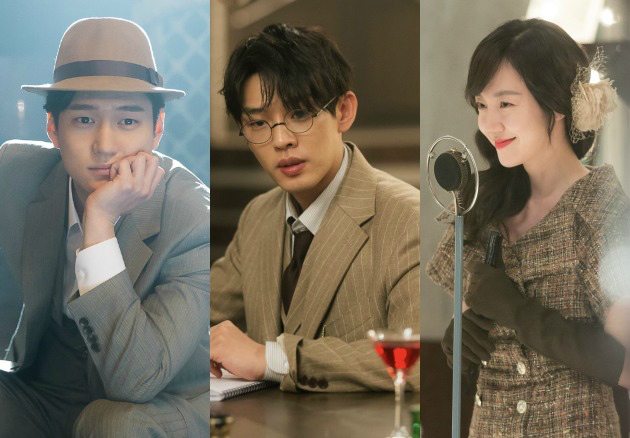 Aaargh, again? This is not a good week for drama addicts. I’m already having a hard enough time with the pre-emption for Rebel: Thief Who Stole the People, which chose Monday of all days to pull out all the stops, take all my tears, and then leave me hanging with no Tuesday episode. And now tvN has announced that that its Friday-Saturday drama Chicago Typewriter will be skipping a full week, with no new episodes until May 12. Say it ain’t so!

This time the pre-emption isn’t related to election coverage, but holidays during Golden Week, a time when many families travel because of consecutive work and school holidays. tvN announced that Chicago Typewriter won’t air as scheduled this Friday and Saturday, May 5-6, and will instead air a special episode on Saturday that includes new behind-the-scenes footage narrated by Go Kyung-pyo. Episodes 9 and 10 will then air the following weekend, May 12-13.

I know pre-emptions never feel like they come around at a good time, but it feels especially mean to take a week off after finally getting me invested in the loveline. I wasn’t really feeling Yoo Ah-in’s connection to Im Soo-jung in the present day (the past is another matter entirely, as I actually wish the entire drama just took place in 1930s Kyungsung and dispensed with the present altogether). But over the last two episodes, the hero’s awkward attempts at courtship were really hapless and endearing, and made him seem human. I just wish they had shown him planting blueberries and building doghouses seven episodes ago, because then I could’ve liked him from the start.

In the absence of Chicago Typewriter (and Tunnel too), this seems like the weekend to marathon something old. Time to go digging through my vault.

What all my fav series are priempted??? Time for travelling this weekend!

This is good for me since I can catch up on the dramas that I was planning on seeing.?

Same here! I've been on vacation, so I've gotten a little behind...now it should be manageable :)

Two of the shows I like are having pre-emption this weekend, gahh. But, at least, I get to marathon old shows!

WHAT. But Chicago Typewriter just started to get SO good. I finally felt the emotional hook I've been waiting for! What a bummer.

Oh, Rebel. My mind actually somehow forgot about the preemption (because, really, of all cliffhangers, how could it be this one?!) and I'm currently reeling from the (re)discovery that I have to wait a whole week. After all our hopes for a reunion, this episode really took 'be careful what you wish for' to a whole new (and totally cruel) level! The only upside is that I've now officially become Chae Soo-bin's hugest fan (because she is AMAZING).

I've become the sort of fan for Chae Soo Bin that I like her instagram posts immediately, then go back to read her comment. She's adorable.

Same here! I totally forgot about the preemption for Rebel (though I've read the news)! When I watched that ultimate cliffhanger yesterday, I still thought 'Oh thank God only need to wait one day for the continuance'.
Not long after I realized that I have to wait for ONE WHOLE WEEK for the next episode instead... so crueeeeellll dramagod.

This is cruel - way to cruel to do this to us drama-addicts! I have been plowing through mid-term papers, with the hopes of getting a satisfying fix with a good episode of Rebel after a gruelling 2 hours....only to find that it has been pre-empted!!!! Going into withdrawal now!

Now I need a stiff drink!

The good news is that the preemptions come the same week as Season 2 of Sense8 dropping on Netflix. I might not have new Tunnel episodes (DAMMIT, right after THAT happens) but I got Bae Doo Na.

Nooooo! This is too cruel after that ending scene from Episode 8 ???

And we have to wait 2 full weeks to get to the next part. Too sad. ?

WHY. WHY. Oh god, I hate this decision - Chicago Typewriter is my reward for a tough week, and no, a behind-the-scenes feature is not going to do it. Noooooooooooo.

Oh Boo!
The dramagods must be punishing me for saying I didn't mind the preemption last week.

Now I really just have to listen to the OST on loop till the following week (omo that sounds so far away!!!!!) and CT comes back again.

This is a great weekend to study for finals

euh whatt??? andwaaaaaaaaaaaaaaaae TT ..so there will be no CT and no Tunnel ..my 2 fav weekend dramas ..that's so cruel *sobbing in the corner*

NOOOOOOOOOOOO!!!!! Not when I'm already starting to like this again!!! (Okay, I admit, I liked this again after seeing that they would not ditch the Dog as merely another animal prop like a lot of vanishing animals in other k-dramas.) Dog concerns aside, the 1930s story has already reeled me in. Nooooooooooo!!! I hate it when that happens—the semester is about to end and I'll be swamped with stuff again and before I pick it up, the story has already moved on!

I am living for any comment about Rebel t b h.

The pre-emptions are painful. Even my mum was annoyed that she couldn't watch Whisper, and she's been following the presidential debate closely.

Maybe if this meant I'd do some more study rather than watch variety show pilots ........

nooooooooo!!!!! good thing I haven't watch episode 8 yet, cause I knew the wait for new episode will kill me.

Nooo! Although on the plus side, an extra week will take some of the pressure off the cast and crew, and will allow for more time to keep the writing and production values high. I love the visual moments in the show, and I know those are hard to maintain when the live shoot craziness gets too intense.

I agree it's really hard to maintain great visual storytelling when live shooting come knocking. Though not impossible!

24 bebeswtz❣️Xiao Zhan is the sunshine in human form ☀️

Girlfriday, I need an older drama to marathon too! Please tell us what you dig out of your vault for a re-watch or first watch.

*waves hands* I need it too.

Actually a few days back I realized I haven't watched The King 2 Hearts (I need something with Ha Ji-won in it) so I put it into my waiting list, but I haven't watched Secret Garden either and my friend suggested I should watch it instead. I think it's a perfect time to choose between those two hmm...

I would say put the king 2 hearts first because both were addictive, both you will find the lead males PITA but the rewards are so much higher and losses so much more saddening that you'll be madder that you didn't watch it earlier. Lastly JO JUNG SEUK. Maybe I should of started with that ?

I just watched TK2H last week and definitely recommend it. I wanted to watch another Jo Jung Suk drama afterwards so I'm on Jealousy Incarnate now. (Looks like I have plenty of time too because of CT and Tunnel.)

O...kay, this is absolutely my fault for not knowing that Jo Jung-seok is in this drama too. I only knew Lee Seung-gi and Ha Ji-won. Now I HAVE to watch this. Thanks! ♥?

Evasive enquiry agency... That drama is hella funny and awsome
I'm in episde 2 right now. Man this drama is addictive.

Well that's annoying. I was really looking forward to Chicago Typewriter. What am i supposed to do?? Maybe i'll try real life? No. that's just crazy talk.

haha! I know what you mean! I can't deal with real life so I watch these dramas. I tell my friends I'm "studying Korean".

Dang. Just when the ship is sailing for our OTP, the show pre-empted? What am I gonna do this weekend? *bites nails*

OK great. No Chicago Typewriter. No Tunnel either this weekend. What am I going to do with my life?

29 gadis is camping on the cells village

It seems like dramaland gives me a whole 2 weeks to catch up on real life duties and adult responsibilities. Time to finish all my assignments before finally getting my drama fix by May 12. Fighting!!

NOOOOOO!!!! Why can't they ever premept ones that I do not care about. All of the ones so far being pre-empted are the ones I love watching.

Well, at least I haven't finished Chicago Typewriter's ep 7 and haven't started Tunnel's ep 12? I don't even have anymore tears left to cry over their absence now *sits silently on the corner*

When I saw the title I said the exact thing: Uuuuh Again?! Hnggg, I guess time to catch up on other dramas. ?

So we won't see the lovesick puppy phantom this week? Ewww~

Preemption aside, I had no idea they observed GW in Korea, too!

Noooooooo!! Whyyyyyyy are you doing this to us???? Last week they gave us two at one go, and this week they took them all?? T______T

I'm only watching CT now so this left me with no show to watch. #kslump is real people. *hide in the corner and cry*

@alert - Try Radiant Office! It turned into an amazing show and after tomorrow you can marathon the whole series. If you haven't tried it I totally recommend it!

Y'all are killing me with these pre-emptions!!???

NOOO! As if I wasn't sulking already because of Tunnel's pre-emption and now Chicago Typewriter, too! I'll go cry in a corner!

I love the pictures you choose for the actors.

No Tunnel and CT, both are the only dramas i am enjoying now, what i will do!

Worst news ever! Was so looking forward to the next two episodes. Ufffffg

But maybe blessing in disguise since I need to travel this weekend. But still.... Maybe time to catch up for Perfect Wife.

Whhhaatt??!! (in WFKBJ).. no noo pleeaasee..
yes i'm already invested in the loveline too TT
How could i pass this week?? Help!! i wish i lived in Korea so i can have this 'family travel' and forget about drama land for a week like they do.Lucky you Korean

Time to catch up on dramas I guess. I've been so busy lately, it's been hard to keep up.

Its going to be a veryyyy loooooong weekend ??? maybe i should plan for a picnic ???

Aaaaargh, this weekend's frustrating X_X
But watching Kwak Siyang torturing a cat and planning evil thing to Seol are frustrating too.
#SaveOurSeols

Another meme contest? I would suggest Rebel's cliffhanger scene (Chae Soo Bin image), except it feels so raw at the moment I couldn't bear to joke about it.
Maybe one about Mori: 'Waiting for you to join the good guys is like waiting for preemption week to be over'.

SAD!!! Well, at least my kids are in a play every day this weekend, so I will be occupied with other things.

I stay away for one episode for my exam and come back to this?!?! Nooooooooooo. ? May have scared my mum with my wailing. ?