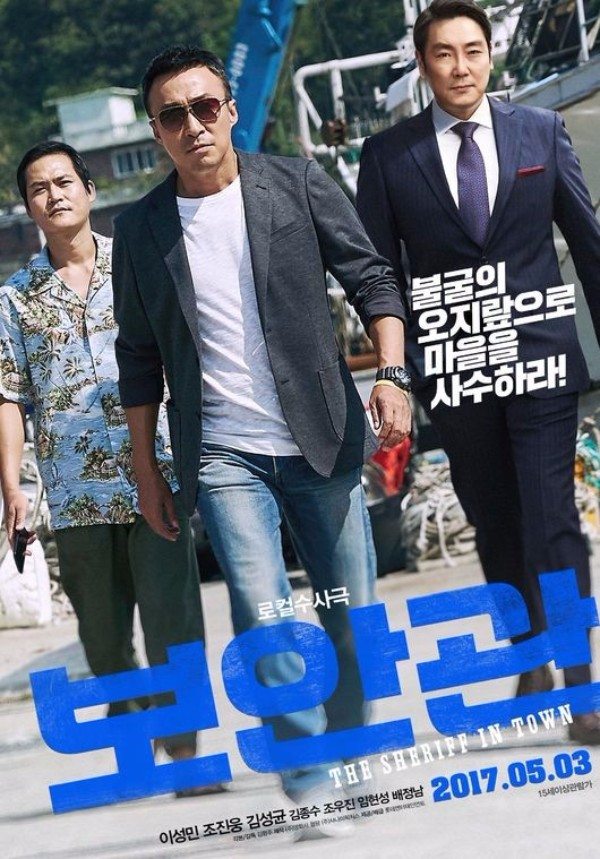 Domestic film The Sheriff in Town surged ahead of Hollywood’s Guardians of the Galaxy 2 and Boss Baby to be the number one at the box office on May 6, with a recorded total of 294,504 tickets sold that day. Set in provincial Busan, this comedy is about former police investigator who self-proclaims himself the sheriff in town. When a city man from Seoul comes to develop the land at this sleepy beach town, the “sheriff” decides straightaway that he’s a shady character and resolves to track his every move.

Lee Sung-min (Memory) plays nosy busybody “Sheriff” Dae-ho, while Jo Jin-woong (Entourage, Signal) plays the suave Seoul businessman Jong-jin, who wins over the local townspeople with his impressive wealth and his sophisticated ways. Dae-ho was dishonorably discharged from his former job because he pursued his cases with too much enthusiasm, using “excessive” interrogation methods. When he hears that the peace of neighboring area Haeundae has been disrupted by a drug ring, his suspicions immediately go to Jong-jin, and he enlists his brother-in-law, played by Kim Sung-kyun (Moon Lovers: Scarlet Heart: Ryeo, Reply 1988), to help with the case.

The copy on the main movie poster reads, “Defend the town with tenacious meddling!” and the trailer follows suit, showing how Lee Sung-min and his trusty side-kick bro-in-law Kim Sung-kyun pursue their target with an unflagging determination that inevitably leads to comedic gold. Lee Sung-min is introduced by Kim Sung-kyun’s voiceover that states that he’s the resident cool-guy and sheriff in town, and we see Lee Sung-min strutting around riding a jet ski.

But we quickly see that he Lee Sung-min is actually a poser, and when he takes a selfie in front of a luxurious BMW, it turns out to be someone else’s car. His wife is also not too happy with him; in the scene where he asks whether they’re going to have steamed meat for dinner, she tells him she’ll steam him for dinner. In his voiceover, Lee Sung-min says: “I left the police force a while ago, but I can still take care of these bad eggs.”

However, soon a new character (Jo Jin-woong) arrives, kneeling in front of the sheriff, and proclaims a great adoration for him: “To me, sir, you’re love. You are love.” Then we see him slowly winning over the townspeople by visiting the local market and complimenting and massaging the ladies at the salon. Meanwhile, Lee Sung-min keeps a hawk eye on him, not liking his smooth talking.

Then we’re introduced to Kim Sung-kyun’s character as he tells his wife in a tough-guy voice to stay back because it’s dangerous when a fight breaks out… only to blast himself in the face with a fire extinguisher. His copy says that he holds a loyalty stronger than blood to his brother-in-law. So when “the greatest enemy that the sheriff has ever faced” appears in town, this comedic duo begin doing everything to stalk their potential drug ring culprit.

It’s a total Dumb and Dumber dynamic as Lee Sung-min tries to explain forensic investigation to Kim Sung-kyun: Mistaking regular kitchen flour for crack cocaine, he ends up burning the kitchen and setting off the fire alarms. In the last scene, Lee Sung-min starts thinking that he should change his methods of investigation, and is hit on the head by a shovel from behind. Suddenly scared that it might be the drug kingpin, he turns behind, only to find his brother-in-law has clubbed him by accident.

The Sheriff in Town was released this past May 3, and is currently playing in Korean theaters.

This looks like a great romp with a couple of my favorite ahjussis.

I was laughing reading this article so I know I'd enjoy the movie as well.

I see Lee Sung Min, I have no choice but to watch.

I spy the Dokkaebi's Secretary Kim!

This looks hilarious and Lee Sung Min in a comedy? Sign me up.

Waiting patiently when we non-Koreans can watch it (´｡• ω •｡`)

LOL i was dying at the teaser already, i can't wait to watch the movie now. Jo Jin-woong and Lee Sung-min my two favorite ajusshis are hilarious together♥.

So I haven't seen this movie yet, but the cast (minus Lee Sung-min) appeared on Radio Star not too long ago and they were HILARIOUS. They all seem to get along together really well, and they kept talking about how much they joked around on set together, like how they liked to play hidden camera tricks on each other during filming. Lee Sung-min also at some point apparently taught everyone to fish and then stood back watching like a proud papa, and he forced Kim Sung-kyun to go snorkeling in the frigid water just so he could take pictures. So cute. (As a bonus, Lee Sung-min wasn't suposed to be there, but he randomly showed up as a hidden camera joke. He is adorably shy and tongue-tied and I luff him so much.)

Wah I need to check it out. In which eps of Radio Star did they appear?

I'm not surprised it's doing well-- all three actors are fabulous, and with all the stressful stuff going on in Korea (and the world) these days, a good laugh is a much-needed tonic. I'm looking forward to seeing it!

Have to admit the cast ist superb! Trailer looks good too! And the sheep sound in the last second XD

LSM has been working out! Looking Good!

Can't wait to see it! Both Dramaland and Chungmuro needs a break from all the seriousness lol.

This looks so good. Wish I could see it now. Lee Sung-min lookin' real good.

I'm a sucker for comedy romps like this. I'm looking forward to it.

Aaaaw... look at the cast! All well-rounded actors are here.
Love Lee Sung-min ajusshi, but sometimes, I can't stand watching his heart-wrenching drama/movie without crying a river, and I got a hunch that this one has a plot twist behind all the comic galore.
Anyway, gonna watch this resident poser/sheriff.

I've never seen Lee Sung-min like this, crazy and so much fun! Take that, Hollywood blockbusters! And that signature sound at the end is gold. LOL

So jarring to see LSM actually look hot and messy in the pics! ^^ It sounds really funny, I wanna watch!