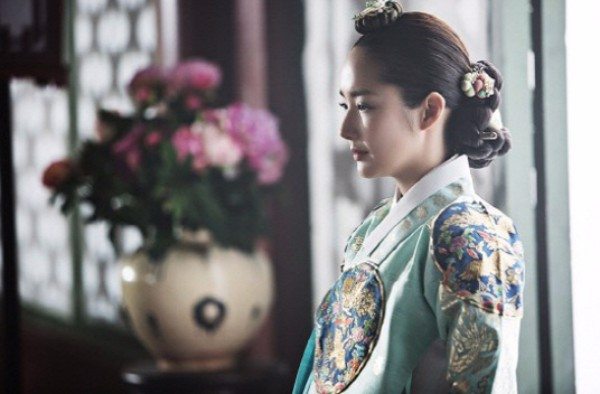 Park Min-young (Remember—Son’s War) looks beautiful as the fallen Seven Day Queen in the latest stills for the upcoming KBS sageuk. The drama is based on a historic legend about the star-crossed lovers, King Jungjong and Queen Dangyeong, who are known as a real-life Romeo and Juliet of Korea.

Not everyone can pull off hanboks well, but here, Park Min-young looks like she was born to wear them. Her character Shin Chae-kyung (who later becomes Queen Dangyeong) is the tragic heroine who is caught between two powerful men, as indicated in the newest promo clip. It opens on a verdant field and a couple sitting under a gazebo in the gently falling rain, while her voiceover says: “I awakened a heart I should not have. And I accepted a heart I should have not have.”

I’m assuming the woman under the gazebo is Park Min-young, and that the man is Jungjong, played by Yeon Woo-jin (Introverted Boss). Although, with two men vying for her affections, it could also be Jungjong’s brother Yeonsangun, who will be played by Lee Dong-gun (Laurel Tree Tailors).

Historically, Yeonsangun was a tyrant who is known for having the bloodiest reign throughout the Joseon dynasty, initiating massive purges of his own court and converting scholarly institutions to royal brothels. After enduring his excesses for more than a decade, his subjects finally had enough and overthrew him for his half-brother Jungjong.

Queen Dangyeong was Jungjong’s wife and first consort, who is known for having the shortest reign in Joseon history of only seven days. She became a victim of the tumultuously shifting political tides as her husband ascended to the throne, and was quickly exiled to the mountains. In the drama, it looks like she’ll be at the center of both the political and romantic entanglements between the two royal brothers.

Wednesday-Thursday drama Seven Day Queen will begin on May 31, after the end of Mystery Queen. 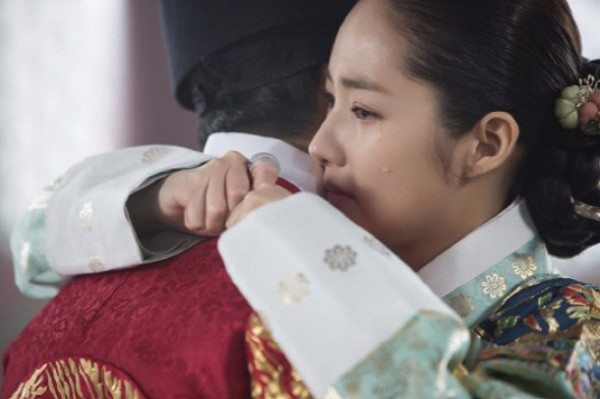 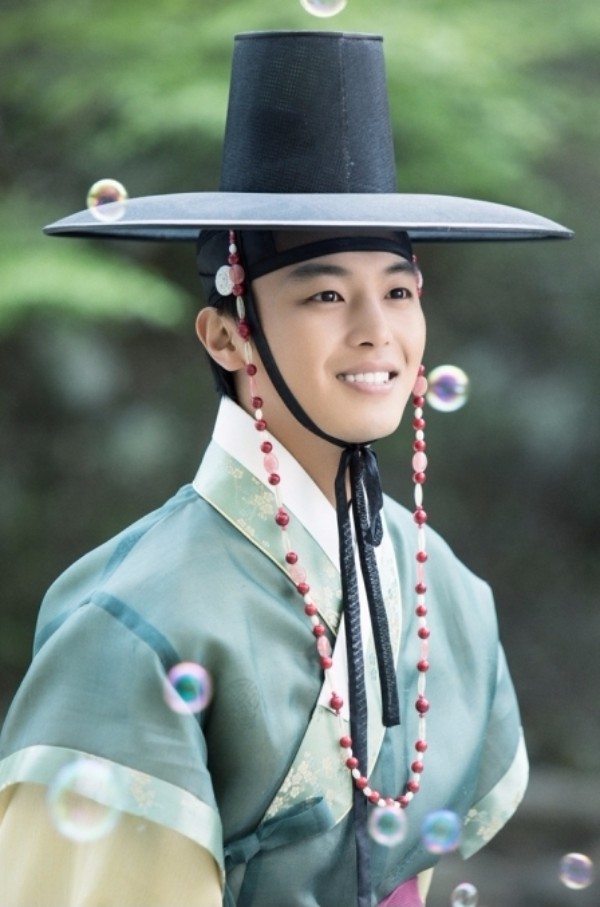 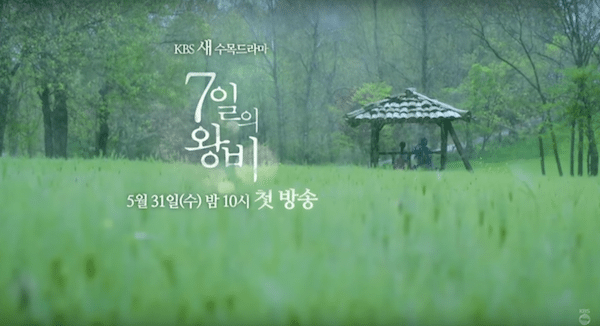 I'm so looking forward to PMY being back on screen! Those hanboks are gorgeous as well

Sometimes it felt like she was born to wear hanboks. She looks lovely in all the sageuks she was in. ?

Pliz be awesome becoz my expectations are really really high????

"who are known as a real-life Romeo and Juliet of Korea." Oh well, here we go again with the tears.

Just the mention of 7 days reign has already got me feeling the feels!

Despite my best efforts to not get sucked into this drama, the visuals are too gorgeous to resist. And the biggest selling points have to be Park Min Young and Yeon Woo Jin looking preternaturally gorgeous in period costumes!

Sigh...... Park Min Young looks so elegant in that hanbok!!!

*flies to Korea immediately to try on hanboks and become a queen* - so what if i'm only a 7 day queen? At least I looked beautiful and captured the heart of a handsome man...

It could be a new beanie level!

Ooh perhaps a hanbok for each day!

Honestly, I was just waiting for Park Min Young to star in another great show after Healer, and now she is! It doesn't hurt, especially when you even add Yeon Woo Jin to the mix. The stills look so beautiful, and I'm preparing my heart for this show

Thanks for the update, tineybeanie. I'm interested to see how this story plays out. With REBEL winding down and Yeonsangun about to head off to exile, the drama gods seem to have decreed that his brother Jungjong’s back story gets heard. It got short shrift in SAIMDANG, LIGHT'S DIARY, but at least it was mentioned.

Er -- does anyone have a feeling of deja vu? After catching up on RULER yesterday, I feel as if I fell down a rabbit hole and will continue to be stranded in Joseon for the foreseeable future. ;-)

There is something about the two leads that makes me want to root for this drama.
Definitely going to watch.

She is totally gorgeous in those shots.

Actually the colour palette for this drama is amazing. The pastels really are gorgeous and evoke such a contemplative mood to the whole show. Much preferred over loud bright colours, at least to me.

Agreed. Especially after watching that one comedic teaser with them together! Rather than the comedy, it was the way they turned the moment into a charming and sweet one that endeared me to them completely. Now I can't wait!

Wow PMY looks so dignified in these stills, so mature.

She looks really gorgeous, and regal. And then you remember her as CYS in Healer, and just wonder HOW she can look so different and so beautiful in both characters.
Hope the show is good, even though I tend to stay away from sad stories (I can cry so easily when I am sucked into a story that I even annoy myself ^^')

Quick question, if she is the wife and first consort of Jungjong why does she have to leave when he becomes king? Shouldnt she ascend the throne with him?

She was queen for seven days, but was deposed after her father led a coup attempt against Jungjong. An earlier article explains the history: http://www.dramabeans.com/2017/05/blood-thorns-and-tears-in-first-teaser-for-seven-day-queen/

Wow... Both their hanboks look amazing! Loving the colour palette!!

Why does Yeon Woo-jin's smiling photo heart me so? Aw man, and I thought Ruler was tragic. This is a close second, alright. Yeonsangun sounds terrible and I think I'm gonna really dislike Lee Dong-gun here, as I'm expecting him to be really good at portraying the horrible person he's playing. I'm already hurting for Park Min-young's character seeing her shed such sad tears. About her voiceover in the above teaser, I wonder whose heart she shouldn't have awakened and whose heart she shouldn't have accepted. It could go either way and be about either men, really. I'm intrigued to find out!

I'm really looking forward to this. I really wanted to watch a full length drama staring at Yeon Woo-jin. I didn't get far in that other drama he was in, Shy Boss or something, can't even remember the name. I like PMY aswell so this pairing is great.

Park Min-young is soooo pretty!!! I love how she Yeon Woo-jin's character wear a similar shade of hanbok. Please, please, please drama be good! Don't let us down!

Gorgeous stills. I am more excited to see Yeon Woo Jin in king's robe. Hope they wont spend too much epi on romance story before they get married, although I think we will see a Yeonsangun at leasf in half of the drama. Ruler vs SDQ - it is good to have Suspicious Partner in between them.

usually, I'm not a fan of PMY (except for Sunkyunkwan). But this one looks promising so I'm really looking forward.
or maybe I'm just like her in sageuk because I think it suits her better because she looks prettier LOL.
And there is Lee Dong Gun, of course I won't let this one slip from my list

I can see park min young playing queen dowager in a few years, she looks just the part.

Wow hanboks suit her. I hope the drama won't disappoint !

Seven Day Queen's teasers are all short, but very memorable and captivating. I can't wait for this to start already.

IM READY FOR MOON LOVERS LEVELS OF TRAGIC!!!!!! GIVE IT TO ME

Park Min Young looks gorgeous, this is the year of Sageuks, I take it. And in what time of the year does Korea look so lush green, it is making me want to visit the country desperately.

As much as I love PMY I won't sit through 16-20 hours for an unhappy ending. I might just fast forward to the good bits. I don't think I have watched things other than movies knowing it would end badly. I don't care about historical accuracy. I just want a happy ending dammit.

I wish Seven Day Queen's ending had a twist like Moonlight Drawn by Clouds but it would be totally unfitting to the title... But then again, The King's Daughter, Soo Baek-hyang did not thoroughly follow its name, even it did not end up a tragedy like it said it was in the drama's website ?

Park Min Young looks soo regal and dignified in hanbok.. Simply gorgeous.. She and Yeon Woo Jin make such a good looking couple!! Looking forward to my heart wrenched from my chest, thrown on the ground and trampled upon my this drama!!

I am borderline about this one. The story are not really capturing my interest even if my fave are the lead.

now there's that blazingly handsome SMILE that was so missed in Introverted Boss!

Aesthetically, this drama is looking quite good.

This is getting more and more attractive!!!