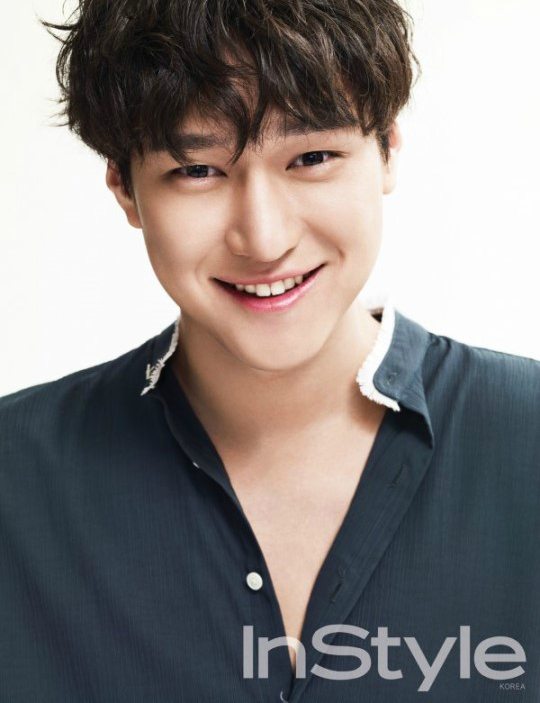 After seven years of supporting roles as the funny friend or the second lead who’ll never get the girl, it’s finally time for Go Kyung-pyo’s (Chicago Typewriter) turn in the spotlight. The actor has signed on for his first title role in the upcoming human drama Strongest Deliveryman, set for KBS’s summer Friday-Saturday slot. He’ll be starring opposite Chae Soo-bin (Rebel: Thief Who Stole the People), who’s also confirmed.

Strongest Deliveryman is an underdog success story about twentysomethings at the bottom of the employment food chain: part-time workers struggling to get by on hourly wages in “Hell Joseon,” a reference to the way contemporary youths see the socioeconomic climate of Korea. The main characters are jajangmyun delivery workers, and the drama gets its title from Go Kyung-pyo’s character, Choi Kang-soo (choi kang = “strongest”), a “veteran” deliveryman with five years experience. He’s described as a human turbo engine with no brakes, who puts his life on the line no matter what he sets out to do, whether fight or love. The drama will tell the story of his growth as he goes from delivering jajangmyun to becoming the CEO of his own delivery company.

Chae Soo-bin’s character also delivers jajangmyun, and she’s so single-minded about making money that she turns down all advances from men. My money’s on the human turbo engine with no brakes. I’m sure they’re going to make an adorable couple, but right now I’m watching both of their currently airing shows and I can’t imagine them being in love with anyone except Im Soo-jung and Yoon Kyun-sang. On the upside, they’re both doing extremely well in their current roles (coincidentally, both devoted puppy loves with a bittersweet touch), so it’s probably a smart move to ride that wave of popularity even if it means jumping from one drama set to the next.

The drama is described as an upbeat and satisfying story about passionate youths, and now that they’ve cast Go Kyung-pyo and Chae Soo-bin as the underdogs, it seems impossible not to root for them.

Strongest Deliveryman comes from the writer of Joseon Gunman and the PD of Oohlala Spouses, and follows The Best Hit on Friday-Saturday in late July.

Hoping this comment shows up...my comments seem to be getting deleted. Is it because am not using my registered account?

Anyway, congrats GKP!!!So happy for him. He gave me major SLS in JI which I normally never have and he is adorable in CT. He has shown quite a range in acting from his movies and other smaller roles. So excited for this.

I think my registered account has an issue. How do I get it Fixed?

Aw his first lead drama? I'm so happy for him, he did so well in "Jealousy Incarnate" and now on "CT" that i figured it was only a matter of time until he got his own drama.
Strongest Deliveryman's plot seems like cute underdog story, a genre i like, so I'll be looking forward to watch.

She is a very talented young lady plus she pretty and hardworking. Shes been working non stop since MDBC. Hope she will go far. You go girl!!!

Yay! How exciting! He's the cutest.

isnt this project risky.. giving the story sounds so so similar in terms of theme to that other drama about to air starring the second lead from kill me heal me and second lead from descendents of the sun

This was a looooooong time coming.

I was just thinking about how it's time for GKP to be starring his lead show and here it is! Will be tuning in for this show, sounds refreshing already!

YAY!!! i think Go Kyung Pyo is an exceptional actor and i love Soo bin. I am really liking these "human dramas" KBS has been making Chief Kim might not be similar, I considered it a human drama with a lot of funny struggle of the average man /woman are some of the best dramas I've seen and enjoyed.
Anything that's not chaebols, rich guy/girl falling in love with poor guy/girl is a win in my book.

Aww I'm so happy for him! Jealousy Incarnate was my most virulent case of SLS yet!

What a happy picture of Go Kyung-pyo... Makes me wonder if dramabeans was just waiting to bust it out for when he finally got a lead role.

So we'll have two leads on the same economic level? No rich guy/ poor girl or rich girl/poor guy? That would be a nice change of pace :).

Oh my! Good for him. I wonder whether
The mood will be funny or romantic or heart breaking ?

Excuse me but let me just stand by the edge of an imaginary tall mountain top and yell, "FINALLY!"

I am a fan of Go Kyung Pyo since Tomorrow Cantabile and this is excellent news,about time!

Omg this is such a strong cast. I KNOW they're gonna be adorable.

Yes! Him too! I was thinking Lee Soo-hyuk as well.

Yay Go Kyung Pyo! I've liked him since Flower Boy Next Door and am in love with him now in CT. I'm glad that his first leading role is in a what sounds to be a human drama. It sounds like a really good fit for him, and I can totally see him as a jajangmyun deliveryman.

so happy for him! can't wait to watch him shine :)

I'm super excited to see him finally take on a lead role!

I have a feeling they'll be very cute together so I'm looking forward to it. Hopefully his role will have a lot of humour and goofiness because that's where he shines best!

Oh lala spouses?? That scares me... hope they dont pull no nonsense on us midway -or basically from like.. the beginning- but I lile the story so far

Now this is one drama I HAVE to watch!! OTP ship sailed!

Hooray!!! He deserves his time to shine. Now, we need to see Lee Soo-hyuk get the girl!

Oh yes, and how could I have forgotten Ji Soo?!

Yay! At last! He certainly deserves it and more so now, after his awesome acting in Chicago Typewriter! ツ

Watched the whole 16 episodes in 3 days! I don't understand Korean and so I was very grateful of the subtitles. I love the cast! 😙😍❤