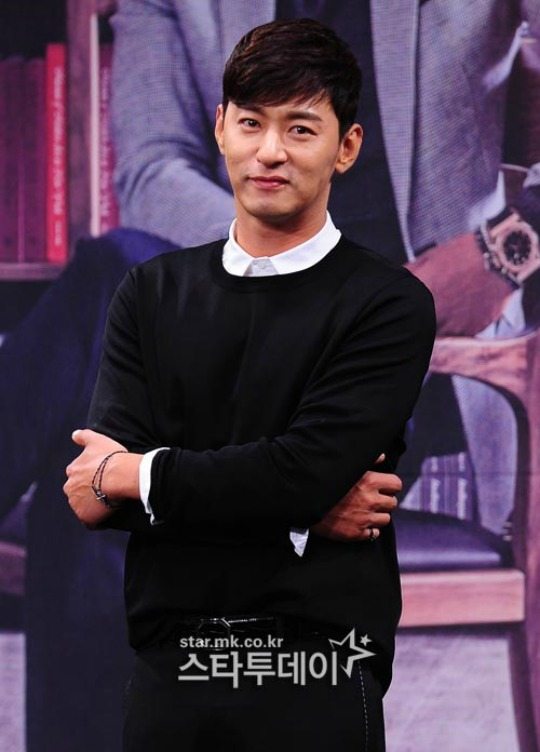 I’m really liking the casting decisions being made for OCN’s Bad Guys spinoff, Bad Guys: Age of Evil. On the heels of Park Sung-woong (Man to Man), Kang Haneul (Moon Lovers: Scarlet Heart Ryeo), and Park Joong-hoon’s (Hanji, My Dear Desperado) offers to star in the upcoming OCN series, Joo Jin-mo (Woman With a Suitcase) has also been approached to join the cast.

There’s no word yet on what his role in the show would be, but given that Park Sung-woong, Kang Haneul, and Park Joong-hoon have all been offered characters that work with the law as prosecutors and a detective, I’m kind of hoping Joo Jin-mo will be one of the titular bad guys. I’ve only watched three projects of Joo’s (Fashion 70’s, 200 Pound Beauty, and Empress Ki), and if memory serves, he played a generally stoic, good guy in all of them. I remember really liking him and his characters, but it would be interesting to see him go full-on dark, like Park Hae-jin did in the original.

Bad Guys: Age of Evil is scheduled to premiere in late 2017, following Duel, Rescue Me, and Black. None of the actors have confirmed their roles, but I hope they do, because coupled with the writer-director duo of Police Unit 38, that would be one solid trifecta of talent. Next on my wish list: a badass female character, preferably as one of the criminals. Make it happen, OCN!

Yes. Hmmm. I'm gonna have to reserve any excitement until I see who the bad guys are. The fact that no one has been casted as such has reawakened my foolish hope that some of the original "Bad Guys" will be back. Stop messing with me show!

there was some warmth... just the gruff kind.

Gotta admit, BG2 is making it up for the lack of BG's cast return well.

You know who else would be great? Lee Bum-soo. I'm dying to hear him in a thriller.. but then again you can wish for everything but can't get them all.. but Joo Jin-mo sounds great too! :D

damn, what a crazy lineup. it's looking great

I watched in A Frozen Flower. He can be so good. It would be dreaming to ask Jo Insung to join this cast too right?

AHHH OMGG YESS!! It might not live up to the original but I actually love the cast so far

Joo Jin-mo won a BaekSang for Best Actor for his kingly role in A FROZEN FLOWER, and turned in a memorable musical performance (vocals and geomungo) as well. I also enjoyed his turn in the 2008 drama BICHEONMU / THE DANCE IN THE SKY (not to be confused with the earlier film of the same name).

Next on my wish list: a badass female character, preferably as one of the criminals.

When thinking of actresses with a high BQ (Badass Quotient), Ha Ji-won immediately comes to mind. Imagine damos Chae-Ok and Namsoon (DUELIST) going over to the dark side.

I'd love to see what Seo Hyun-jin would do with such a role. Seolnan in THE KING'S DAUGHTER, SU BAEK HYANG was a badass. It would be interesting to see her as a modern-day black hat. She has the chutzpah to play flawed characters to the hilt (OH HAE-YOUNG AGAIN). She'd probably make a stunning Lady MacBeth.

Or how about a badass ahjumma? Another KDSBH alumna, Seo Yi-sook, turned in a gripping performance as the implacable Madam Park, wife of Lord Jo, in REBEL. She was magnificent.

JJM - I feel really bad for him in Empress Ki because he was quite wasted. Again, the writing of EK was not really good and messed up. I enjoyed him in melodrama Beloved Eundong, and he was so sexy with Kim Sa Rang and this pair really made me hard to get into another couple for a long time.

I want to see Seo Hyun Jin is such role too. She is very capable to do so.

Hi @seralovestteobokki! I am so ready for Joo Jin Moo as the bad guy as well! I like him a lot in Beloved Eundong too.

@pakalanapikake I second Seo Hyun-jin's casting! She cameo-d as an evil queen in Horse Doctor and of course, she was so badass in King's Daughter so I believe she'll fit right in in this drama!

you should watch feast of the gods too. Seo hyunjin was so evil and greedy yet acts like a victim so so real. Can't believe I hate her role back then just because she's so good

She is good in everything! I will say she is one of the most versatile actressess in kdramaland.

Thanks for the pointer to FEAST OF THE GODS. The title never grabbed me, but if you say she's good and evil in it, it's worth checking out. ;-)

For some reason I only watched the first episode or two of HORSE DOCTOR -- and that might have been before KDSBH. I've been meaning to get around to it. Now I have more incentive.

I've seen BELOVED EUNDONG listed on Netflix. Am interested to hear you both enjoyed JJM in that role. EMPRESS KI was airing at the same time as KDSBH, and I was a live-watching basket case over at Soompi. Nowadays I could deal with the heartbreak, but there are so many other shows that I'd really like to see. NIRVANA IN FIRE is one of them. Ditto for JUMONG.

My to-watch list is in a state of constant redshift. ;-)

Hey, Jo Hyun-jae could join the Bad Guys with JJM. He's overdue for a project, although I'd really like to see him in another sageuk. ;-)

Wow such a stellar potential cast for Bad Guys 2. If these actors sign on its a must watch for me!

How could they make me cry a river by didn't bring Park Hae-jin's back and then try to appeal me by serve "Kang Haneul & Joo Jin-mo" on the plate. Who I am to say no to delicious dishes?

Joon Jin-mo is pretty great in Woman With a Suitcase (one of the 5 dramas that I'm simultaneously watching :P). His character is in the grey area so it'd be interesting to see if he'll play another character who's in the grey or more solidly good or bad.

if joo jin mo in, I'm in because I'm just craving for sexy voiced actor lol such as Janghyuk, Sungjoon and Park Hee Soon.
last time I saw JJM were in My Love Eundong though

They're my fav too~ And Jin Yi-han!!! Haven't seen him in anything since My Secret Hotel except that short appearance in Let's Fight, Ghost! Wonder when will he comeback to the dramaland.

He's shooting a daily drama now (The Golden Pouch) and I believe he's changed his name to Kim Ji-han now :)

Oh I didn't know he changed his name, thanks for the information ^^~ And ouch! Too bad I can't watch The Golden Pouch, I kinda miss him.

I knew Tal-tal but that time I was so captivated with JJM, Tanashiri and how annoying Tae hwan lol. But I noticed in Master's Sun, his voice quite manly tho

Wow I loved BG's original cast for Age of Evil we won't be disappointed.

Is OCN aiming to break their ratings record again or what? The casting has been really ambitious.

I still wish the original cast would made a comeback. I mean, they made a promise at the end of the episode! (Well it's just a words that come out while joking around) but I will still pray that the original cast could return before the other actors give a confirmation. *pray*

I'm going to miss the dad in City Hunter though. He played the crazy dog so well.

hmm...so OCN is trying to lure us into watching Bad Guys 2 by using this cast.I think it's working and why aren't there any bad guys yet?only prosecutors and detectives.I would also love to have a badass female criminal:-)

The caliber of a cast is like movie-caliber. The must be wasting away the budget on the cast.

So we know the cast has the acting chops to pull off the script and more. Now, all we need is a good script. Please.

Hmmm. Kang ha neul is still the most exciting cast for me thus far.

With the recent OCN successes, big stars are now gravitating towards it. Nice.

I don't have a very good memory of Fashion 70s, but I liked him in other works like the movie Flower, and drama Suitcase so this could work. He can do complex characters well.

Sooooo, I was skeptical about watching the 2nd season when they started calling it a spin-off without the original Bad Guys BUT then they go around offering the roles to actors I loooove. If they sign on I'm changing my mind! :)

I enjoyed the first one, but will have to proceed this one on with caution. I'm afraid they would focus on making too much of a splash and being more fancy, and forget what made the first one great.