Life is rosy for the youths of Fight My Way 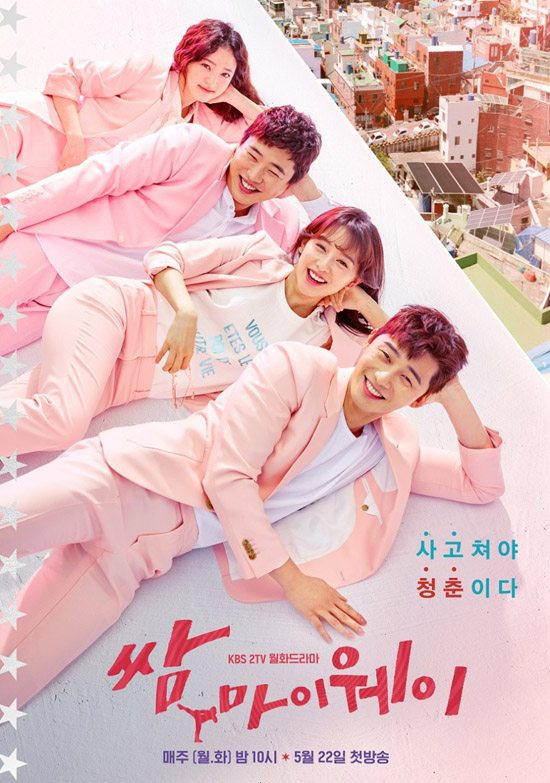 As far as promo posters go, Fight My Way’s feel like a breath of fresh air (it’s so easy for shows to fall back on the same designs that I often find the posters for lots of different blur together in my mind). I’m digging that this drama isn’t shying away from color, either, starting with their bright yellow first poster and continuing with this rosy one, which features all four of the main cast members: Park Seo-joon (Hwarang) is at the front, with Kim Ji-won (Descended From the Sun) directly behind, followed by supporting actors Ahn Jae-hong (Answer Me 1988) and Song Ha-yoon (Sweden Laundry).

The tagline on the rose-tinted poster repeats the copy from the first poster: “You have to cause trouble to be youth!” I like that there’s a drama that’s embracing youthful foibles and painting them in a breezy, entertaining way, as each of our main characters deals with what it’s like to have dreamed big in their younger days, only to find that as they cross over into adulthood, they haven’t lived up to those dreams and are instead stuck in third-rate lives.

That thought is reflected in the next poster, below, which says, “At some point, we became ‘just adults.'” Without fanfare, and without any of the excitement or grandeur they thought adulthood would bring. There’s something poignant and appealing about that thought, which bypasses the idea that we have to shoot to be the best or the most and gives us permission to be okay with being “just” us.

Below that, we have a few pictures from behind the scenes, mostly featuring Park Seo-joon and his thousand-watt grin as he stands by on set, reads over his script, and is pictured wearing his character’s Taekwondo uniform. Man, his smile could power a building. *feels warm fuzzies*

Fight My Way will premiere on May 22 as KBS’s next Monday-Tuesday drama. 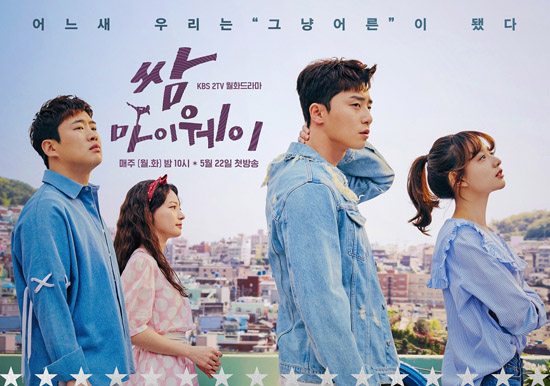 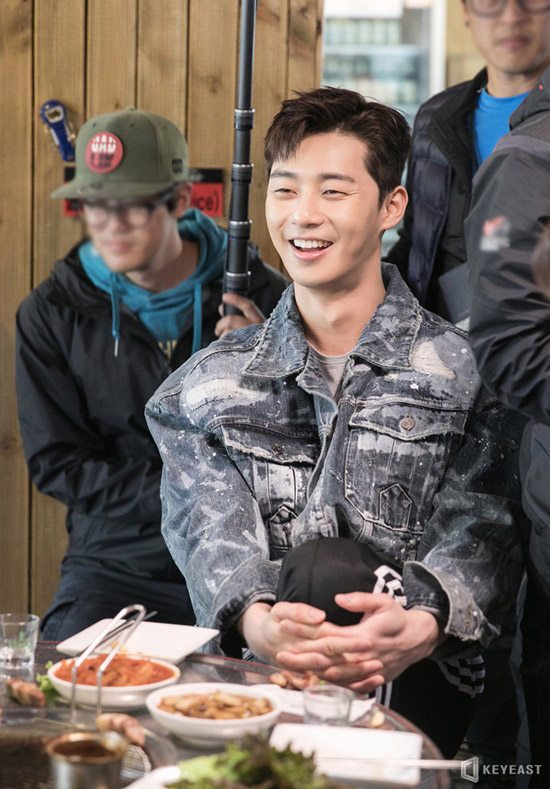 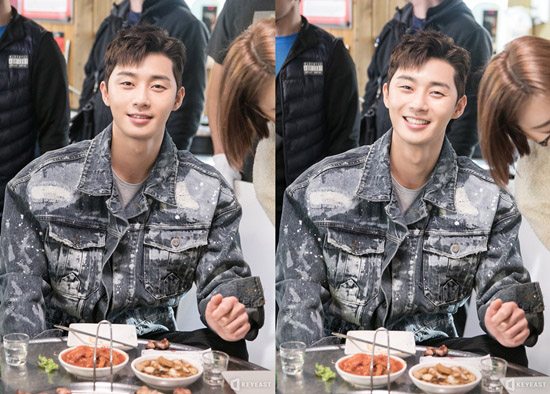 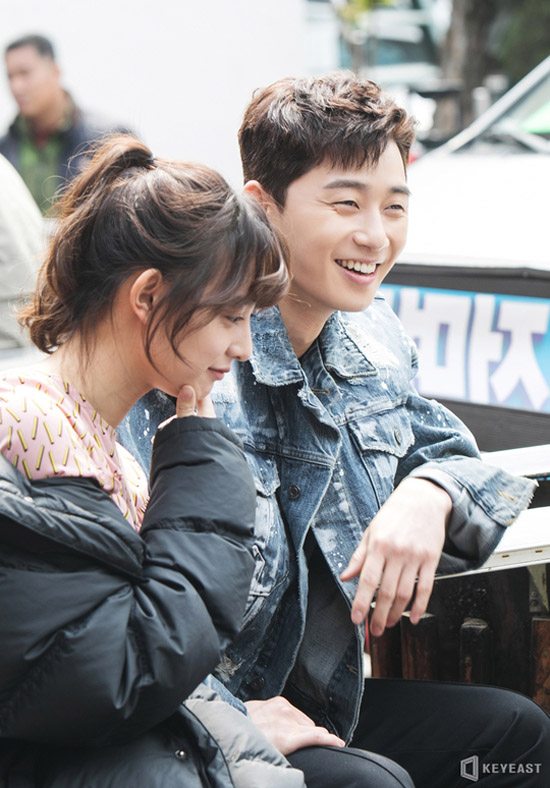 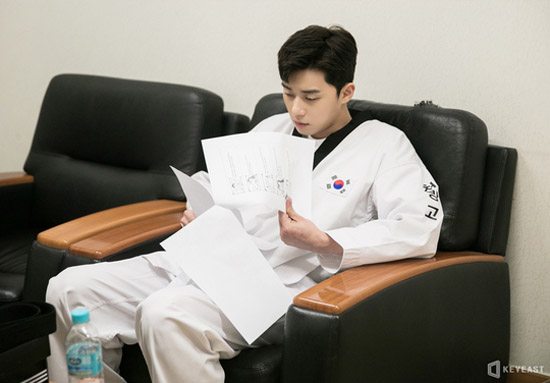 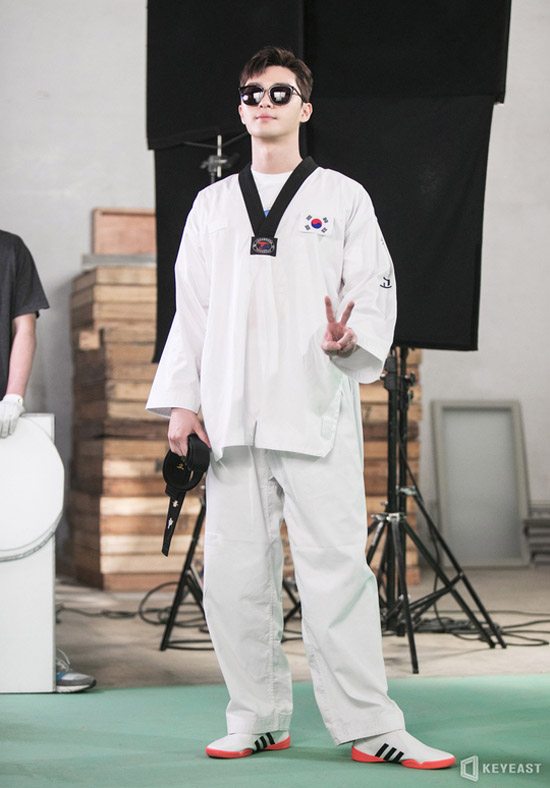 bhahahahahaha you and me both. We are both praying

joining the prayer circle with you ?

See we are good followers :P

Joining with you too! :)

Same! Just finished watching Kill me, heal me and I need a good drama with Park Seo-joon looking fab.

I'm with you.
Please be good (Hogwarts way).

Omg I love that pink!!! I hoenstly the way they have played with the colours~!! Must have taken quite a bit of adjusting though to make sure the skin didn't get pigmented as well though....

But I admit I want them all to dye their hair pink now...

It might be of the most relatable drama for me this year along with AOY 2. I hope it will be a good portrayal of "young adults".

So refreshing and lovely poster with beautiful pink color and the lighting on the hair is nice, i hope it's light and funny, I thought SP would be light but judging fron the first episode, it seems to have a dark tone.

That last picture is great. He looks like such a dork.

I'm hoping this will light up my mondays.

I was just going to say how much I love the use of color! I'm also digging the rooftop apartment location choice and the youthful style of the characters. Pretty much everything about this show appeals to me! Please let it be as awesome as it looks. These two deserve a hit!

I'm really loving the feel of their posters. It's so bright and happy. Hopefully I'll be able to relate to this drama as I too go through adulthood.

I love the second lead female's (unusual?) hair style. It feels fairy-ish for me

I love her hair too~! It's pretty and different from all the shorter hairstyles I've been seeing.

I love it love love it! The color just jumps right at you and makes you happy.

Honestly I wasn't planning on watching this but I have to admit I am definitely interested now. The teasers are interesting and I love the posters!

Wow, definitely digging all the pink! I'm getting so hyped for this drama I don't even know. Ugh, only ten more days. Fingers crossed!

i'm starting the prayers. I really want this one to be good, or excellent if possible.
I'm already in love with the promo material. In the posters above I feel the young-adult-adolescent-adult contradiction : they look at the future, but they are still stuck in their everyday present.
i can't read the french written on her shirt, too bad, it seems awfull kkkk

So I wasn't hallucinating after all! It was so unexpected! By the way it is written (if I'm not mistaken because I can't see some letters) "vous etes le roi de votre vie" which mean litteraly "you are the king of your life"! .. It sounds weird lol!

Aahhh.. I am so feeling this drama. I feel like I am exactly at that point in life too. I don't want to let go of my dreams but I am more cynical about achieving them now than before. I got a job and joined hoping I would like it but I am realizing that is not the case. But I am still doing it. So, I guess, I have become "just" adult too.

I can't even remember the last time I got excited seeing a drama poster. And if it's THIS good, I don't mind seeing more! May 22nd feels like centuries away but I'm so glad they are generous with teasers and posters like this.

For a second I thought that's Kim Ji Won's hand on Park Seo Joon's thigh and this ship just sails even faster!

I loveeeee the colorful posters especially the rosy pink tint.
I really hope this drama stays fun & bright and not veer towards creepiness/suspense.

Need something sweet and funny among all the OCN thrillers I'll be watching. XD

Really excited about this one ❤❤

Man, his smile could power a building.

I simply love all the PSJ pics!! This is gonna be good!! Bring on the fluff and hijinks!!

Im really looking forward to this. Now that lahl ended, this would be a perfect balance to watch with Ruler.

I'm watching the first episodes of Suspicious Partner and Ruler last night and my eyes hurt from the prettiness of the couples on my screen. Now it's like drama-gods are saying "Just you wait til May 22". This couple and not to mention Kim Seul-gi on the other channel. From the visuals alone I can feel how blessed I am this month~ ♥

I really want to love this. Please be good.

Hoping it's as mellow and feel-good as it's promoted to be, in the similar vein as the reply series :)

Second poster is my favorite. Blue jean shirts, their poses and the city in the background....very nice♥ Park Seo Joon x Kim Ji Won look like an amazing pair already and from the snippets I've seen so far : They HAVE chemistry! Can't wait.

I love it already! 10 days seem too long.

Who else thinks that the lead Park Seo-joon looks like Seo In-guk from shopping king loie/ high school king of savvy or is it just me??