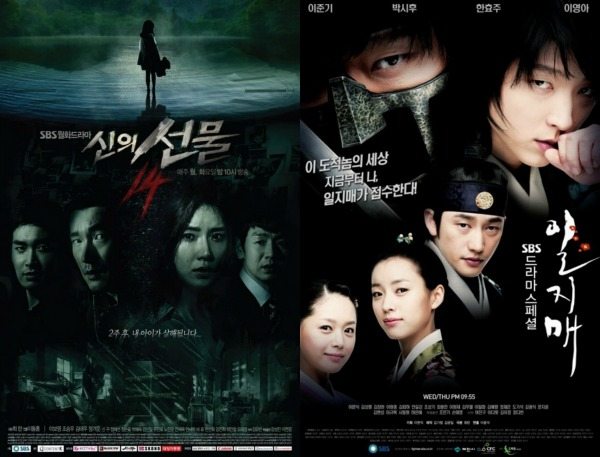 OCN has been churning out some pretty good shows in its Saturday-Sunday slot, and they must be excited by the results, because they’ve announced a new drama titled Black to air in their weekend spot in October. This means OCN already has all of the dramas for that slot planned through the end of 2017. That’s some forward-thinking I wish other channels would practice.

Black is the newest project from screenwriter Choi Ran, who also wrote Iljimae (the Lee Jun-ki one) and God’s Gift–14 Days. The show will be a thriller — naturally, because, OCN — but it’ll have a fairly strong romantic element in that the main character is a grim reaper who inhabits a human body and falls in love with a woman. His love will break the rules of the heavens, and the grim reaper will… be erased from the memories of everyone on earth. Uhhh, spoiler alert? Wait, that can’t be the ending, right? Because, coupled with the writer of God’s Gift–14 Days, I’m feeling extremely wary about the ending of this show and it hasn’t even started yet.

The new fantasy-thriller hasn’t announced a director attached to the project, but reports are saying that the director of OCN’s Voice, Kim Hong-sun, is a likely candidate. He’ll definitely bring the thrill in thriller if he joins Black. Some of the cases of the week in Voice were absolutely terrifying, and I still get chills when I think of scenes like the little kid stabbed by his “mother” hiding in the washing machine and her finding him in there. *Shudder*

Clone thriller Duel will follow currently airing Tunnel, and we’ll get Rescue Me after that, the drama starring Taecyeon (Bring It On, Ghost) and Seo Ye-ji (Hwarang). Taecyeon will be one of a group of unemployed youths who hear Seo Ye-ji’s cry for help from an alley. Black will premiere after Rescue Me finishes its run and, then we’ll have the Bad Guys spinoff to round out the 2017 lineup. Whew, well, at least we know our weekends will be occupied by some quality thrillers.

Not sure if I'm ready to watch another drama from this writer. Never really recovered from the ending of God's Gift. ;_;

Exactly, I have not recovered and I don't want a repeat of such feelings either.

I'd rather marathon it after reading people's responses about the drama ending. I don't want to be betrayed for the second time.

If every station released drama list for the next 6 month, it would have helped with some life planning ;D They could also team up and make an app for drama addicts to create a schedule of dramas in advance (like period calendar)...

Have you tried the app TVShow Time?

This sounds like they took bits and pieces from Goblin. Haha

It does, doesn't it? That was my first thought when I read the article. How about some originality in the concept, hmmmm?

Haha, mte! I guess that's why I'm already interested in it.

It seems grim reapers are the new hit. I'm afraid though that no one will ever be able to beat Lee Dong Wook in that role. He was perfect.
And that amnesia plot is not funny anymore. Just cut it out, please.

(Don't make me choose! I'd rather die twice so I can meet them both.)

JIW was my first kdrama actor crush, mainly because of that role!

JIW is my second kdrama actor crush because of his role in 49 days. My first was Won Bin from autumn in my heart...

That's the true k-drama grim reaper for me, I used to love 49 days so much <3

Sassy and classy--always a fun combo.

Jung Il-woo's The Scheduler was so good! I loved 49 Days! Such an interesting drama.

RIGHT. Like excuse me but JIW made grim reapers look cool before they were cool...

But why no mention of Moo-Young in ARANG AND THE MAGISTRATE? He's a reaper, too.

Still bitter about the Bad Guys spinoff, but I'll definitely give Black a try. Sounds fun.

I am so excited for this. I feel like the whole grim reaper/love-that-cannot-be storyline could be really moving even if there's a sad ending - as long as it makes sense within the plot and doesn't make viewers feel ripped off at the end...not to name names...

Still wary about this writer. Iljimae has been on my to-watch list for the longest time, but I heard it was good. God's Gift's ending ruined the whole show for me.

But... this new drama is on OCN! I love thrillers and OCN dramas have been great so I sorta want to give this drama a shot if I'm fond of the cast too. The plot is intriguing. Not sure what is the thrilling element though. It seems to have a bigger romantic element.

The writer won't use the same ending again right? :P

This writer always had shitty ending, I watched both of Iljimae, and God's Gift, and those drama endings... pains me.

Right? I don't mind open endings, but that Iljimae one was so unsatisfying, I still remember hating that ending so much.

Oh my! I didn't watch Iljimae so I thought "Well, if it's because of God's Gift, I think I can give the writer a second chance, on top of it, this is an OCN drama." But then I read your comment. Perhaps I will wait til the drama's over before binge-watch it.

And yet, in JB and GF's books, Ijimae is such a high-rated drama... Perhaps it's not so bad??

The show was really good, it's just the ending was so unsatisfying, there's literally so much questions that's unanswered, and it feel so rushed, they should've extend it to 22 episode imo

Ending was all right in Iljimae. It's Iljimae the phantom thief. It's very known classic Korean tale and the ending is expected to be like that.

For the classic western tales. What do you expect withe ending if Romeo & Juliet or THe Beauty and the Beast?

Iljimae had it's own signature ending too.

I don't know,I don't trust the writer. I try to see God's Gift and Iljimae but I couldn't finish none of the two dramas.

IN OCN WE TRUST~~~
But I'm still pained by that ending of God's Gift and I'd rather not get hurt again :(

I am just waiting for the Bad Guys spinoff.

OCN really needs to up their game, Tunnel is just superb.

2017 is the year of thrillers and crime dramas ! Just check all the upcoming dramas (not that i'm complaining though). Maybe Signal's fame was a trigger for al these glorious thrillers.

OCN has been the home for thriller dramas since forever. They have been producing dramas of this genre for many years.

So I know I'm Goblin obsessed, but I can't be the only one getting Goblin vibes from the brief story and character descriptions, right? How funny would it be to have Kim Go-eun fall in love with a grim reaper this time around? Hehe. That aside, this sounds very interesting! Can't wait for casting news.

Omg @ that one Voice case! Ugh, the poor baby boy! I need to finish that show...

With all due respect, seeing the writer of "God's Gift - 14 Days" attached to it already has me scratching my head and questioning this drama.... Just like @vipsky, I also never really recovered from the ending of that drama T..T

I thought I made peace with that ending. Remember, God's Gift was a really good drama!

Is it too much to ask for a girl to be a reaper this time? Otherwise this drama doesn't sound too inventive, I think. I still might check it out, but y'know, it isn't too late to change the premise a bit, right? *waggles eyebrows*

OooOooOOOOO000hhhh, THAT would definitely make everything much more interesting. I doubt it, but man, I think I'd cry harder if it was a girl grim reaper.

You mean like Toilet Seat Girl in DEAD LIKE ME?! Get Mandy Patinkin as Rube, and I'm all in. Alas, Der Waffle Haus is no more. But I could see it turning into a pojangmancha, with Park Chul-min as Rube. ;-)

Ooh, I haven't heard that one, beanie! But it sounds super interesting haha I'm gonna check it out ?

I remember liking the LJK-HHJ Iljimae, but I don't remember anything about it except that tree kiss. And that until the end, she didn't know.

Well am ready for another grim reaper drama but can't they take off the "… be
erased from the memories of everyone
on earth" bit? goblin and 49 days were awesome but I still cry whenever I recall them. I think av cried enough for this year.

But am still excited for the drama.

I thought it might be a lighter thriller until the director for Voice was mentioned...now I don't know to be excited or scared lol However I'm definitely all up for good cg and saguek fantasy.

Iljimae was great. One of the Korean dramas that I don't want re-watching. This might be another drama to look forward to.

Sorry for the tupo above. I meant Iljimae is one of the kdramas I don't mind re-watching. I watched it 3-times already. There are only very few kdramas you can find of this genre esp with mix of such comedic style.

I have not watched God's gift. Looking at the shade colour of the poster, it seems a thriller. OCN is good at producing dramas of the genre.

Two thumbs up for BLACK..Nice one..