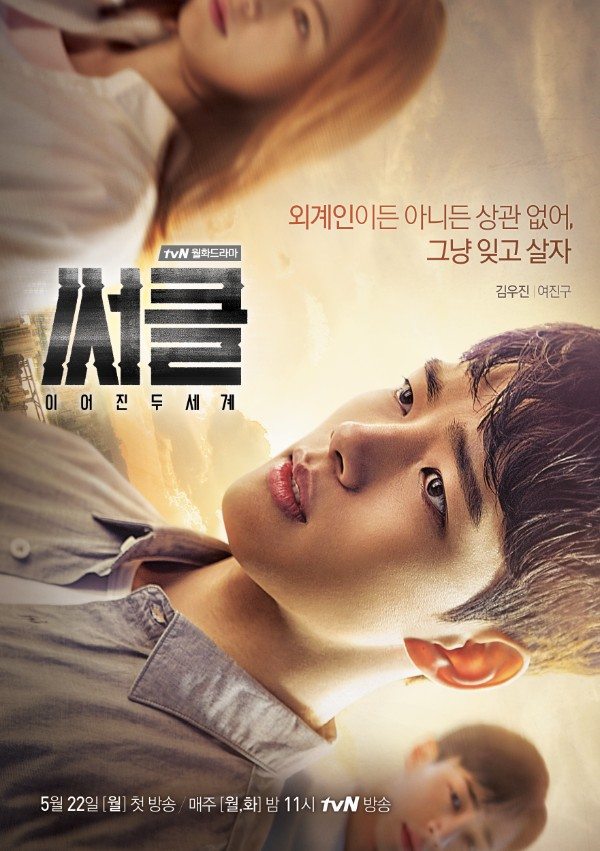 Woot! More promo for sci-fi thriller drama Circle: Two Connected Worlds has been released, and it’s all rich with more substantial info on the mystery at the center of the plot. Part 1: Beta Project takes place in the present, starring Yeo Jin-gu (Jackpot) as an elite college student who becomes involved in a murder case, and Part 2: Brave New World takes place twenty years later with Kim Kang-woo (Goodbye Mr. Black) pursuing the same case as a homicide detective.

In Circle’s 2017, Yeo Jin-gu has just been hit with the tragic death of a school peer named Ji-hyuk, and some even blame him for the suicide because Yeo Jin-gu is known as the top student at Handam Science and Technology University. Students protest the college administration for promoting a constantly stressful atmosphere of academic competition that has lead to several suicides in past semesters. The first teaser below shows Yeo Jin-gu grappling with a truth he is unsure of, although his twin brother, played by Ahn Woo-yeon (Strong Woman Do Bong-soon), seems to be certain as he demands to know why his brother won’t accept something that he saw with his own eyes.

Although Ahn Woo-yeon confronts Yeo Jin-gu several times on the matter, he continues to deny what he knows, saying that he’s not crazy and he doesn’t care whether “they” were taken or not. The copy reads: “A suspicious university serial murder case.” Then the teaser turns over to Part 2, where in 2037 most of the rich and powerful have fled to Smart Earth, an artificially-controlled district without crime, disease, or poverty, because of the rapidly spreading pollution in Ordinary Earth.

The violent crimes department at Ordinary Earth receives a call from Smart Earth that a kidnapping has occurred. Initially, they think it’s a prank because Smart Earth isn’t supposed to have any crime due to the mandatory emotional regulation therapy the citizens there receive. However, Kim Kang-woo goes to investigate and finds that a woman has been kidnapped and potentially murdered. He yells at Lee Ki-kwang (Monster), who plays a Smart Earth governmental official: “How much have you hidden and fabricated all along?” Lee Ki-kwang explains to Kim Kang-woo: “All Smart Earth citizens receive safety therapy so that they never feel the aggressive emotions that urge them to commit crimes.”

But apparently, something has gone awry because according to the copy, “A murder that wasn’t supposed to happen has occurred.” The higher-ups are worried that the media will have a field day with this new development and that public opinion will turn on them. Meanwhile, Ordinary Earth policeman Kim Kang-woo tries to investigate the Smart Earth case despite restrictions upon his presence in the district.

The next teaser hints more heavily at the truth Yeo Jin-gu denied in the first teaser: the possibility of an alien infiltration. Ahn Woo-yeon asks his twin brother: “Isn’t it strange? Why are normal students suddenly dying for no reason?” A sequence of chase scenes are shown as Ahn finally confesses that an alien disappeared right in front of his eyes.

In 2037, Kim Kang-woo and Lee Ki-kwang investigate a cadaver with “No. 1” inscribed on the forehead. A deep voice scoffs at the idea of crime on Smart Earth, but Kim Kang-woo is furious at Smart Earth’s deception when they claim that it is their district’s 5000th day free of crime. A girl’s voice on a recording says that a mysterious “they” have returned, and in each timeline Kim Kang-woo and Yeo Jin-gu race for answers.

Individual character posters have also been released for our four main characters. The copy on Yeo Jin-gu’s poster reads: “Alien or not, it doesn’t matter. Just forget and live.” Gong Seung-yeon’s (Introverted Boss) poster is bathed in the same golden light, perhaps indicating that they’re both from the same timeline. Her poster says: “Do you think I’m an alien too?”

Then there are Kim Kang-woo and Lee Ki-kwang’s posters, that are definitely more futuristic-looking with the bright white light in the background. The text on Kim’s says: “Wait, wherever you are I’ll find you,” which is the line he says in the first teaser above. Lee Ki-kwang’s poster shows his cold thought process, representative of Smart Earth: “Not feeling harmful emotions is logical.” I was so excited for this drama when I first heard that the plot would involve a dystopian society and aliens. And now, all the sci-fi-thriller-ey character posters and teasers showing Yeo Jin-gu and Kim Kang-woo are making my fangirl heart flutter with even more anticipation.

tvN’s Monday-Tuesday drama Circle will begin broadcasting on May 22. 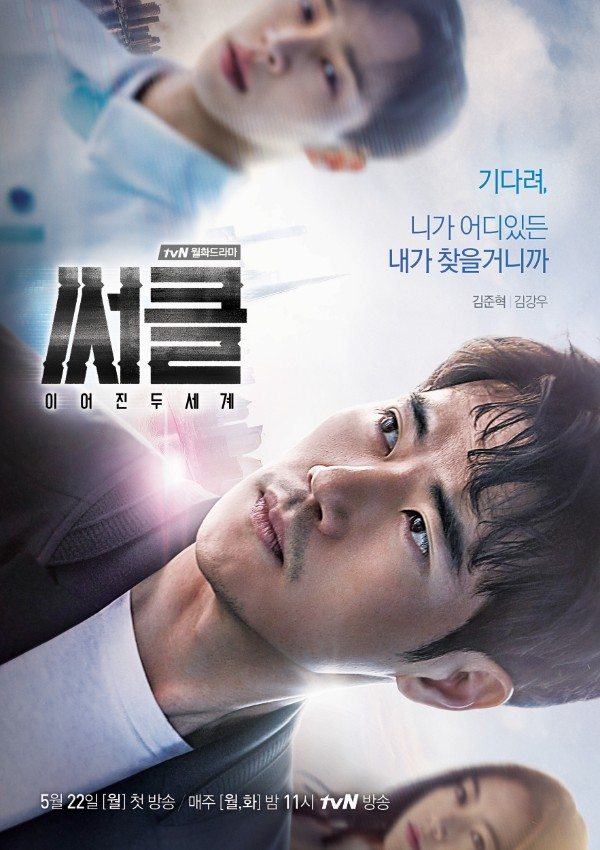 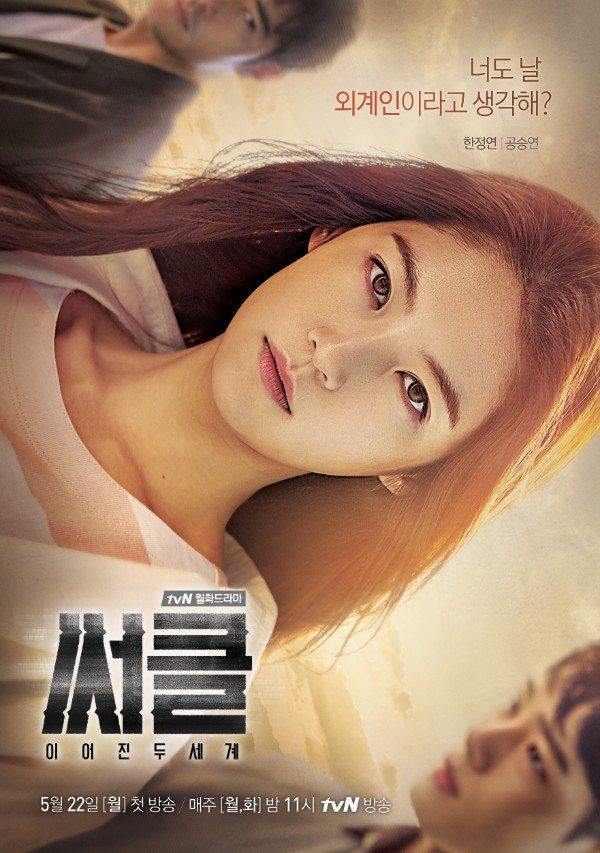 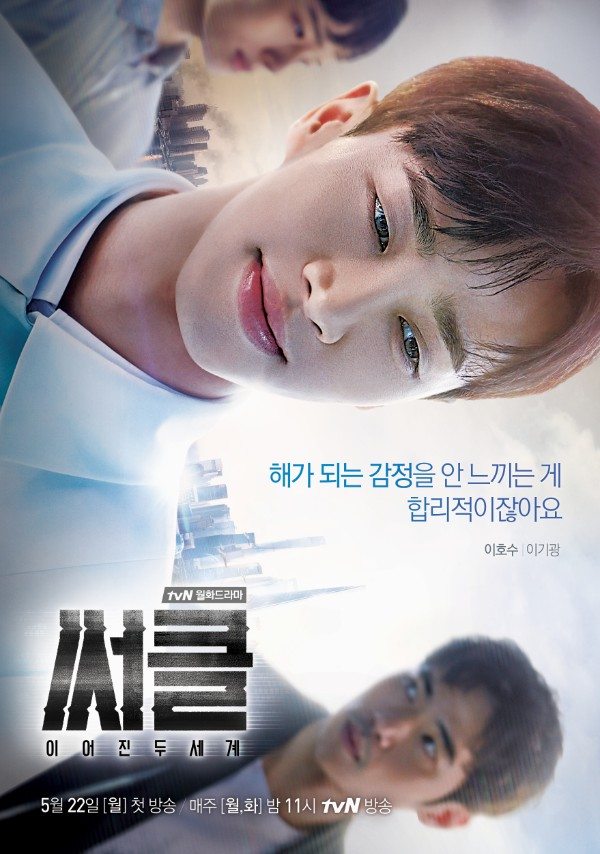 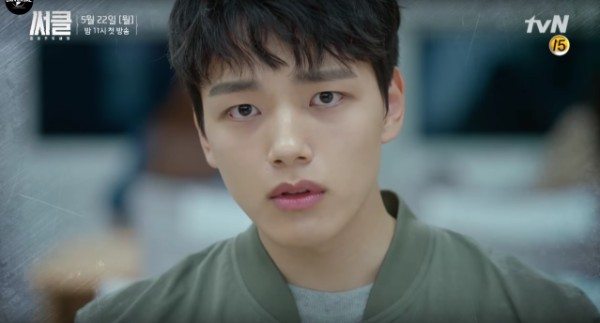 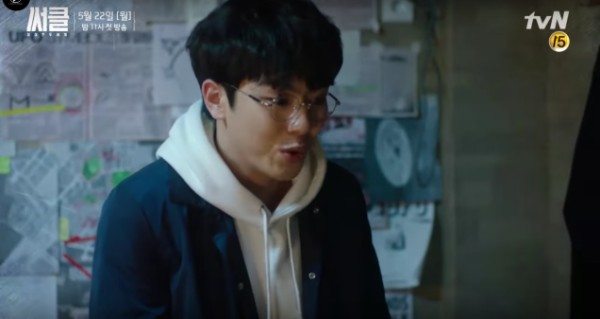 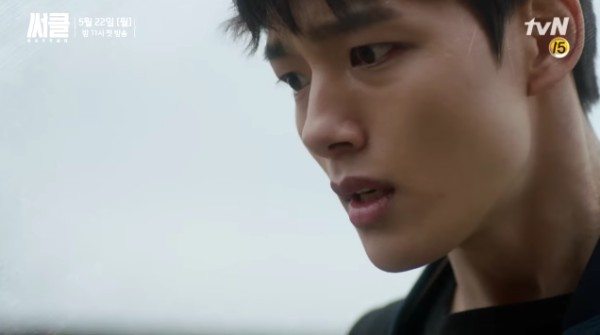 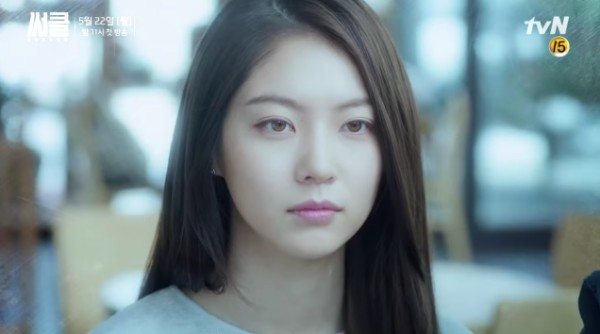 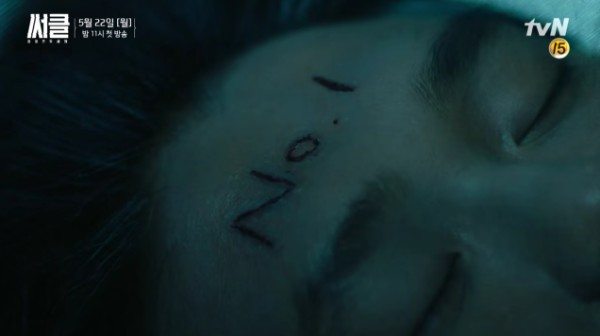 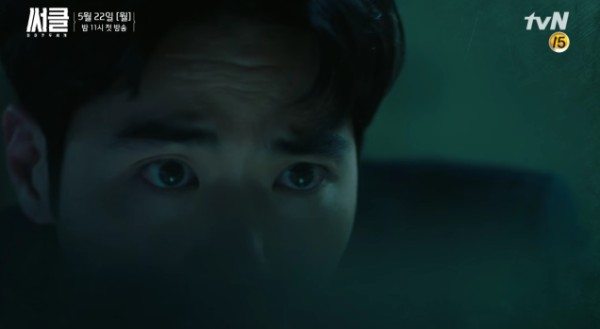 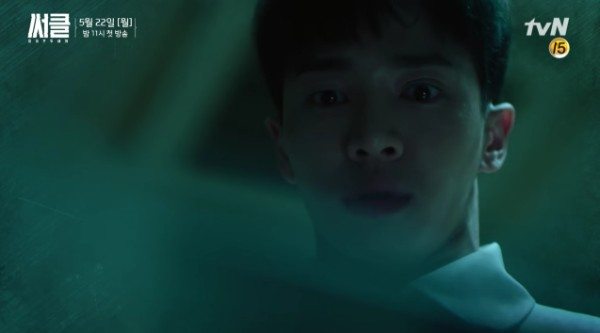 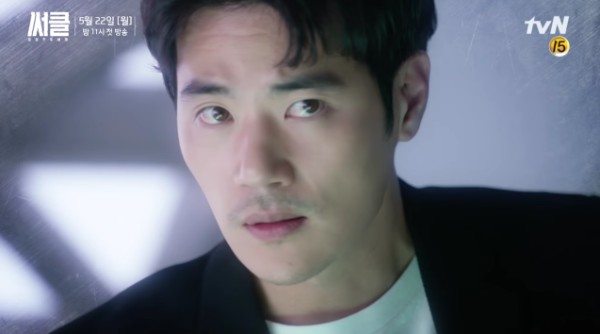 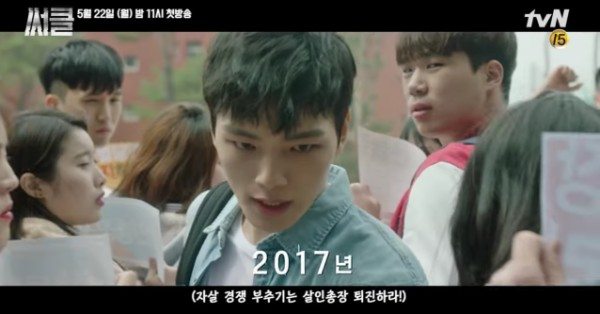 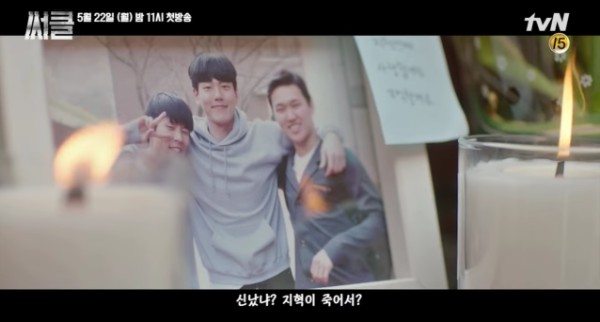 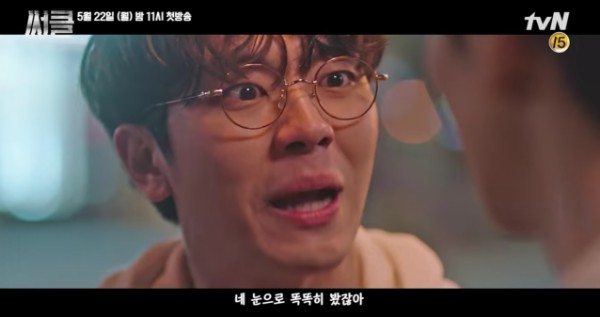 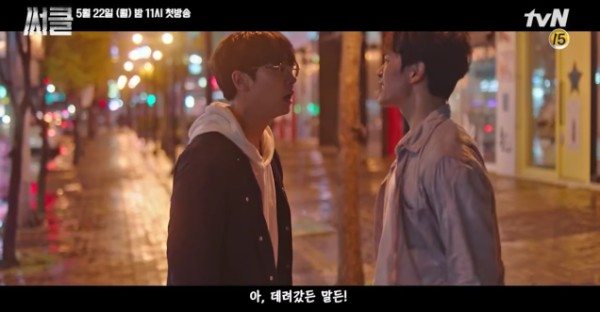 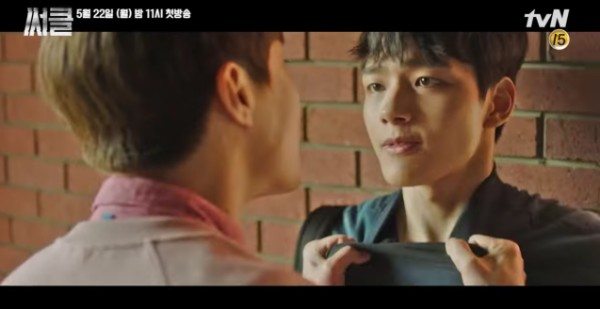 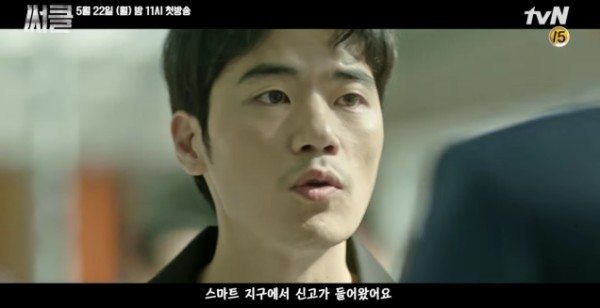 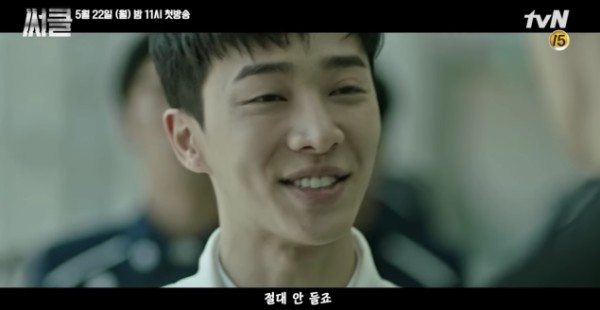 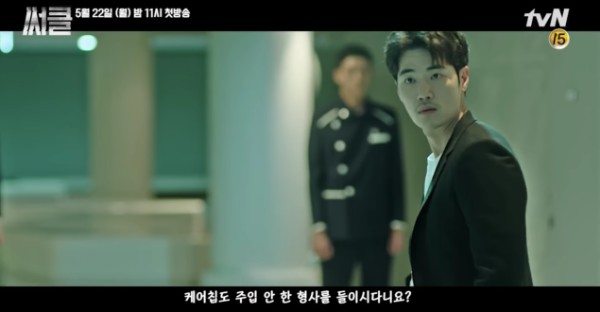 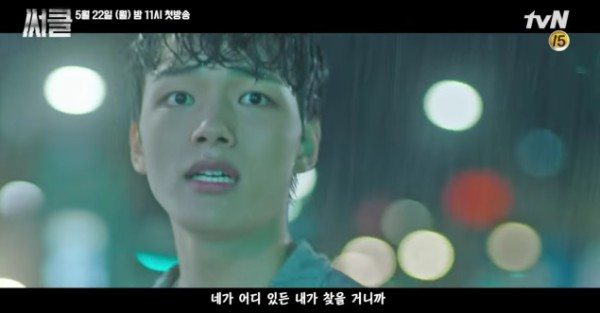 Ha! Exactly what I was thinking when I read this.

I think if done well, it can be very very captivating. However if the subject is messy and the poster is placed sideways then you're just jumping on the trend.

Whoa, this looks intense, but looking forward to seeing Yeo Jin-Gu's ever-maturing acting. Him running at the end of the second teaser looking amazing, even with the pained expression.

Especially the last one where he's crying ?

Posters are nice (partial to Kim Kang-woo's), though I wish I didn't have to twist my neck to see the pretty. Looking forward to this, fingers crossed it'll be solid.

LOL @junny I did the same thing!

?. This is either gonna be really good, or suck really bad. I reeeallly hope the former.

GSY is everywhere. I'm not complaining

It's a good thing I'm using my phone, or I'd have to tilt my neck xD

totally! I keep getting drawn in more and more with every promo that comes out. I guess the promo guys are doing their job well.

And seeing all the running Jingoo does in the teasers, I could already imagine him in Hwayi 2 or some other awesome action thriller. ?

This sci-fi trend is a boon to me. The premise of this show is the only kdrama that's caught my coworker's interest. I can't wait for her to fall into the kdrama black hole with me *rubs hands with glee*

Aaahhh, this looks so good! Futuristic! With aliens! Yeo Jin-gu! And Lee Ki-kwang, my lowkey fave budding actor! I'm so excited for this I can't even arghhh. How will I survive this summer?

The poster reminds me of Maze runner. lol

Omg does it? I looove Maze Runner

I'm excited for this. So many good dramas coming up! I'm only currently following Chicago Typewriter and Tunnel (and now Ruler and Suspicious Partner), so really glad to have lots more new ones to watch soon.

From the same starting point of Moon Sun, YJG goes so much further than the two girls.

WOW the posters are soooooo pretty. ❤️
Love the glowy lighting and the land/city backgrounds.

The teasers were a bit chaotic and packed with various scenes. I'm not gonna pick them apart. I'm just ready for the actual premiere! :D

"Mandatory emotional regulation therapy" reminds me of the film Equilibrium starring Christian Bale. The promos are making me very excited for this drama.

the genre kinda 'really really fantasy' which isn't much my cup of tea but Kim Kang Woo still handsome as always and YJG, this kid really grew well so I'll had really hard times to watch every single drama.

I love me some sci fi and feel like the genre is definitely underrepresented in kdramas. Glad that it seems to be a recent trend. Fingers crossed this is good.

I'm not sure if craning my neck got to do with it but I thought I saw Park Seo Joon in the poster ? Turned out to be Lee Ki Kwang - never seen him in anything.

He is good in monster ?

I hope this is good, i need another crack drama after Tunnel ends.

I love the posters and this show looks intense, can't wait!

@tineybeanie I didn't expect the premise to be this good! Ack! I can't wait now!

I really, really hope that the writers handles this well, because it sounds so interesting, but there's lots of room for error in terms of writing which could make this go south, especially with so many writers.

I just checked the date and realised it starts next week. It looks really good but can I fit in another drama (deluded fool the answer will of course be yes).

A sci fi drama?! Woooh!!
I love Stranger Things (season 2 please come quickly!!)
maybe i will love this also.. A korean sci fi drama. I think this will be my first..

I am so ready for this drama!!! Hopefully its a hit cause Korea needs more than the same ol', same ol' rom coms and legal dramas!

Kim min jae should be in here as YJG twin brother

with success of signal, everyone wants to ride the wave of time travel murder mystery stuff

I'm often not a huge fan of sci-fi type of shows, but suddenly this looks very interesting.

I knew he would grow up handsome, but it's still a surprise.

My neck's paining. But OMG this is so intriguing. Definitely on my watch list now. Can't may 22 come a bit faster , Lookout airs the same day too.

Great... now they made me TOTALLY wanna watch this. Just don't pull a D-Day on me (flop plotwise midway)

OMGGGGG. This looks awesome, I'm pumped for this.
Lots of good dramas seem to be getting ready to air.
This one sounds amazing. I love sci-fi too. And thriller.
Dystopia? Aliens? Mystery???? Sign me up!!