Teamwork gets colorful for the Lookouts 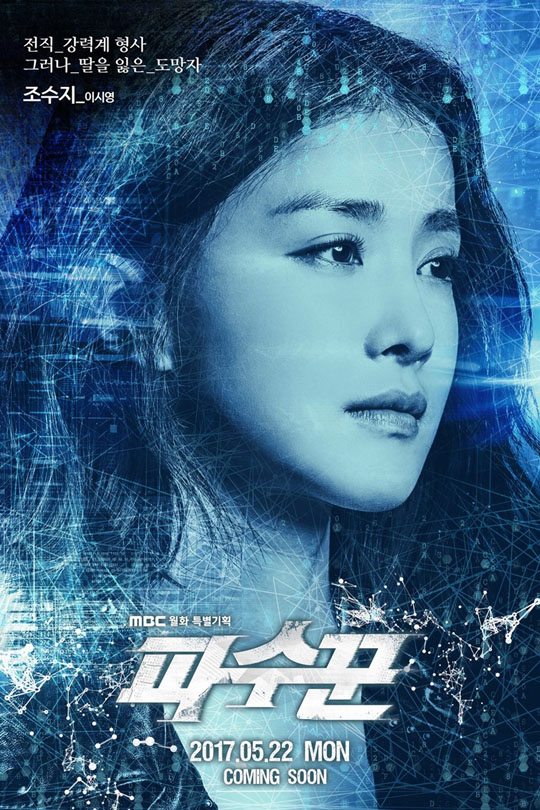 I’m digging the use of color and graphic overlays in these new character posters for Lookout, MBC’s upcoming Monday-Tuesday action-thriller that features a motley group of citizens who decide to take action as vigilantes when the system fails them. Each main character has lost a loved one to a criminal, and when the authorities are unable to capture the culprits, these people decide to band together and use their own methods to mete out justice.

Lee Shi-young (My Beautiful Bride) plays Jo Su-ji, who is described on the poster as “A former violent-crimes detective, but also a fugitive who’s lost her daughter.”

Kim Young-kwang (The Man Living in Our House) is identified as Jang Do-han, a prosecutor who acts like a materialistic snob on the outside to cover up his vengeful heart underneath. His poster copy reads, “Nobody knows my true face, not even me…” He’s meant to be mysterious and hard-edged, which is the opposite of our other prosecutor, played by Kim Tae-hoon (Fantastic), shown smiling while his poster copy calls him “A pure-hearted passionate prosecutor that this era needs.”

Kim Seul-gi (Second to Last Love), meanwhile, looks intense as Seo Bo-mi, whose poster reads, “If I can just end this hell, I’ll do anything.” Bo-mi was once a bright, cheery high schooler, but after she was the victim of a crime, she became a withdrawn loner who lives like a recluse.

Last but not least, we have Shinee’s Key (Drinking Solo), looking rather mischievous as Gong Kyung-soo, a talented hacker who likes to skateboard and is blessed with a personable attitude and the ability to make friends instantly with people. His poster says, “This genius hacker can’t be left out of the lookouts.”

And at the very bottom, we have one last poster featuring a view of the city from above, and the copy reading, “The corrupt cannot become new or be made to repent…”

Lookout is directed by PD Sohn Hyung-seok of Two Weeks and is written by a new writer, Kim Soo-eun, who was picked out of last year’s MBC open scriptwriting competition. The drama follows Rebel: Thief Who Stole the People and premieres on May 22. 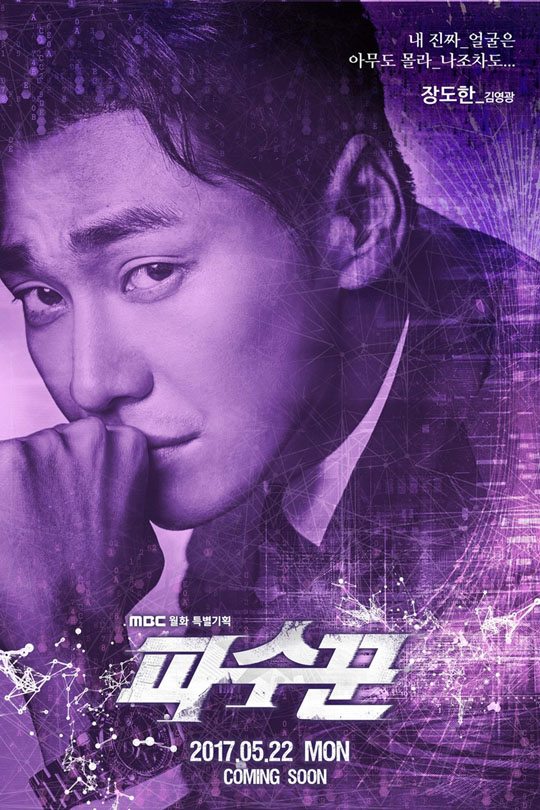 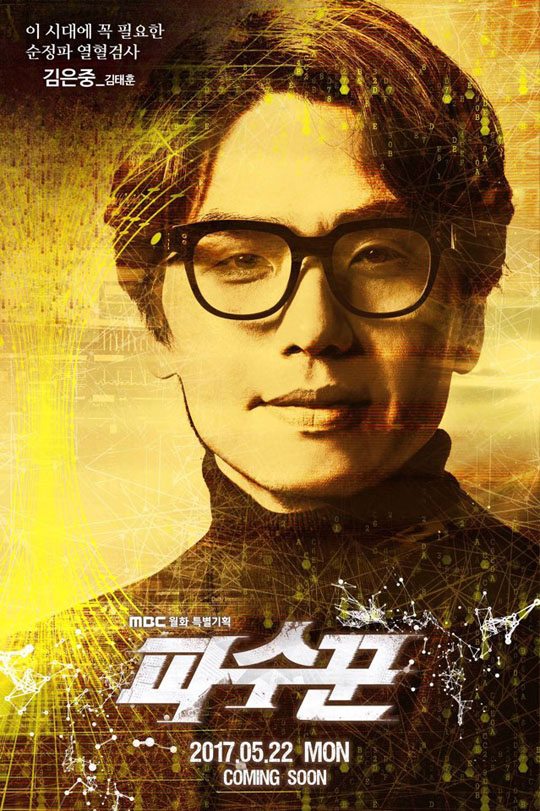 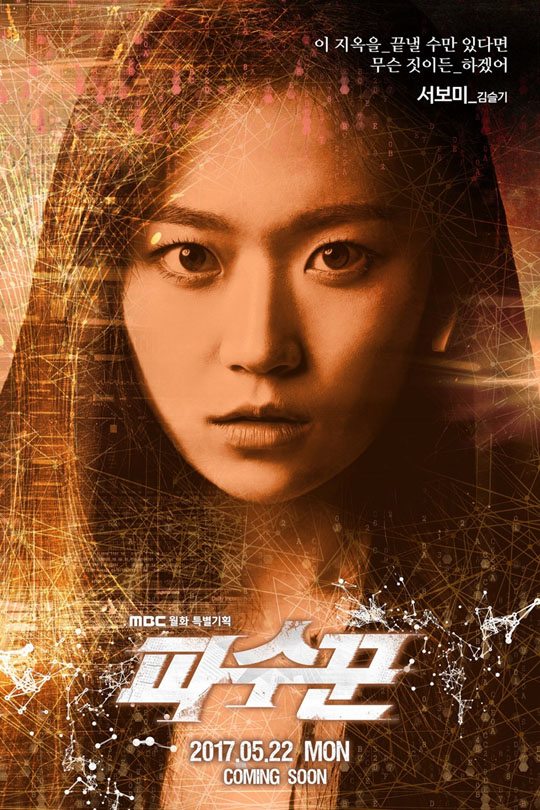 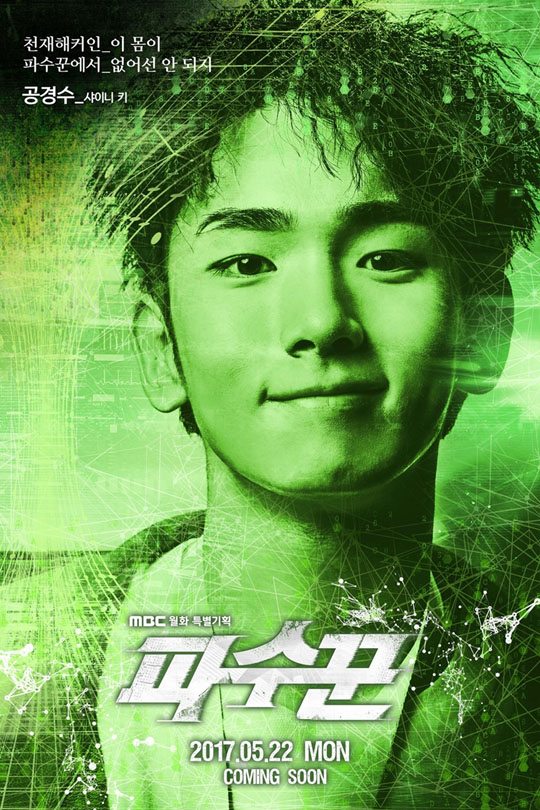 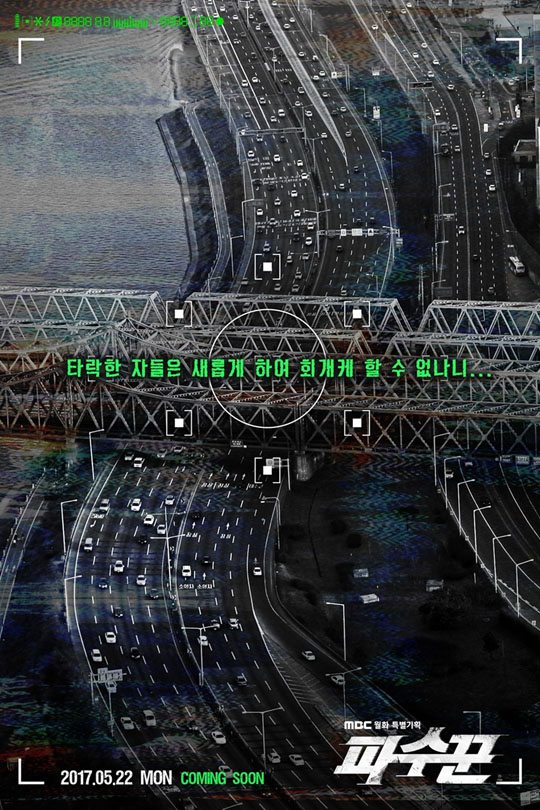 I like it. Looks very artsy but modern tech.

Oh, I like the posters ! Especially LSY's and Key's, so striking ! I hope the drama delivers.

Kim Tae Hoon and Key's are my favorites.

These are very cool posters. Digging the rainbow colors. I am still vacillating between whether or not I will watch, but these posters make me lean towards watch.

I'm still unsure as well. Probably gonna check out the first couple of episodes and see where that takes us.

Ooh! It has a Matrix-y vibe to it, with a dash of Rainbow Brite (but an intense one). ? This show had me at vigilantes. After the lovely breeze that's TLAHL, I might pick up this sort of thundercloud.

For some mysterious reason, I thought of Dark Angel when I saw the posters.

Lee Seulgi's gaze is drawing me in, and Key's overall look is so sheepish and cute.

I wonder why Lee Siyoung is the only one not looking at the camera.

I think the colors are expressing their emotion, you know. For example, blue is sadness, purple is jealousy( I think) etc.

What an interesting theory!

The only one that doesn't fit (at least according to the character blurbs) is Kim Seulgi's.

Well, kim seul gi's character description says that she was
" once a bright, cheery high schooler, but after she was the victim of a crime, she became a withdrawn loner who lives like a recluse."
Maybe she is still has the cheerfulness in her, but she hides it?

Ooh I like that, her gaze in the poster is her current mood, but the colour shades signify her inner character.

thank you so much for sharing it with us!! :)

I'm looking forward to this show way too much, I hope it doesn't disappoint! Vigilantes, geeeenius hacker and Key all make me very excited for this to start :D

Director of Two Weeks? Count me in!!!

Prettyyy. I like the girls' and Key's posters the best. For some reason it gives a bit of a dystopic feel to me. Drama, please be good!

Can't wait for this series to start~!!! The posters look really savvy and after that trailer, I want to marathon it now, hehe! ;)

I am so digging these posters, love key's smiling face...looks cute

Hope this drama will get me hooked as two weeks did.

Taehoon's poster blurb is so cheesy, and Seulgi's one is just sad- save my girl ;n; I wonder if there was an assault involved in her crime that made her that reclusive but that's the show's answer to me. Also, shoutout to daydee for analysing the colors! I think Seulgi's /might/ eventually come to play, just not now ono

These posters look great. It looks modern and very technology based. It fits the show. I think now, I have to check this drama out.

I'm really excited for this drama and so loved the way they made the characters' posters!!

WOW. To be honest I was going to watch this for Kim Seul-gi, and her character is rarely seen (pun intended). Introverts, yes, but the last time I saw a hikikomori was still Jung Ryeo-won.

But deym. I think this is the first non-sageuk of MBC that has this kind and level of promotions - daebak. Wishing the best for this team!!!

This looks also cool. They need to bring it to compete against Circle.

Where exactly is Shin Dong Wook? Wasn't he supposed to be in this show.

the posters are tempting me.

I really like the poster designs!! The close-up shots plus colour and technical details work well together.

Mischievous hacker. That's my favourite kind.
Looking forward to this one.