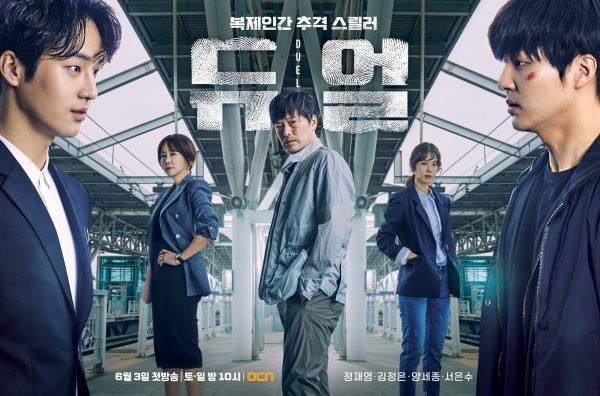 OCN is stepping into the thriller battle of summer with its human clone drama Duel, which stars Jung Jae-young (Assembly) as a veteran detective struggling to find his kidnapped daughter. Kim Jung-eun (Oohlala Spouses) plays an ambitious elite inspector who finds the big clue of the case, and Yang Se-jong (Saimdang—Light’s Diary) stars as the two cloned men who are divided between good and evil.

The two posters show a nice comparison between the two clones. The first poster shows the five main characters (including Seo Eun-soo) at a subway station, with the two clones facing off. I love how they styled the two clones, and how Yang Se-jong embodies their different personas. If I didn’t know they were the same person, I would assume they cast two actors who looked similar. It is truly amazing how style and presence can transform a person.

The second poster is more intense, with Jung Jae-young gripping one of the clones by the collar while looking back at the other. I love how they made the poster vertical while the photo remains horizontal, which feels jarring in an intriguing way. The poster’s copy reads, “On the day my daughter disappeared, I saw two men who looked exactly the same.”

In the first poster I’m left wondering which clone is the good one and which is the bad, but the second poster seems to indicate that the bad guy is the clean and tailored clone. Moreover, I’m curious to know what the relationship is between Jung Jae-young and the clone he is gripping.

It looks like the summer will be filled with plenty of thrillers with Forest of Secrets, Circle, and Lookout all set to air soon. Look for OCN’s Saturday-Sunday clone thriller Duel to start its run on June 3. 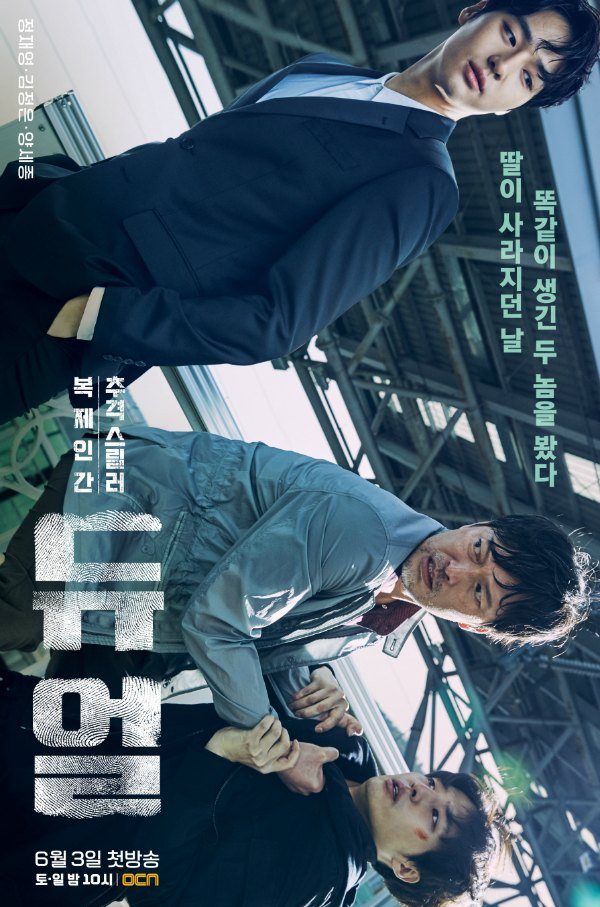 wah. This one completely flew under my radar but the poster looks so good, and it's OCN and now it's got my attention. One of those rare cases where the posters helped level my interest up.

Wow, indeed! *lying down to the right*

Thank god the semester will be over soon so that I can watch ALL of the upcoming thrillers.

I know right. I am looking forward to these new thrillers after I finish my exams.

Well this looks good,hope we'll get a twist between the two clones

In Kdramas, to find out which person is evil, all you gotta do is see which ones showing more forhead.

He's got the suit. Just missing a bit of hair gel.

Unfortunately, this means the evil one is always hotter.

Very true and am feeling guilty for that, lmao

These days the kdrama trend is make your bad guy handsome and hot.

One thing I was wondering why Kim Min Jae got nominated in Baeksang (RTDK) but Yang Se Jong is not? I remember KMJ role was quite small compare to YSJ. Nothing against both actor but I have more impression of YSJ in RTDK than KMJ.

In what category did KMJ get nominated?

Hear! Duel might set the path for Yang Se Jong. I hope he'll be able to portray the two clones notably. These are very interesting characters if done explicitly and who knows, these might be the spotlight he need.

From the teaser, he's quite good portraying 2 different characters

If it helps, they revealed the scoreboard for the judges on Soompi and Kim Min Jae received zero (0) votes. Not that I'm wishing him bad or anything, I quite frankly felt that it was a shame.

The posters are definitely looking good. I'm getting a Stephen King Dark Tower vibe from the second poster and the first is giving me Orphan Black feels. June is certainly going to be a thrilling month. I can't wait!

I like the angles in both posters. The first one points to Jung Jae Young as the center.

We have a TON of thriller dramas this year. I've already finished like 3.5 (.5 being SWBDS lol) of them and watching 3 right now. xD

8 gadis is camping in the cells village (again)

The posters looks so good and intriguing. I'm excited for June.

I feel like all the cool mystery-thrillers are coming out in the summer and then after that it's back to standard k-drama fare with more rom-coms &etc. As an avid mystery-thriller lover I'll have to pace myself so the shows can last me to the end of the year :P

Poster is getting my interest, me likey. It'll be interesting to see how they explain all the scientifc aspects of it.

I'm interested in the sci-fi aspect of this show - the artificial human cloning. I wonder if the show will also give focus on this or is it more about the thriller.

I admit that the clone is really what really draws me in (not to mention is it puppy Yang Se Jong. I'm sold!) I'm excited how it will be mixed to the kidnapping plot. Do we have to expect murderers or serial murderers in these one too? Anyway, it's OCN.

So looking forward to this one! And we'll be able to see how yang se-jong will portray 2 completely different characters. Double hooray!

Is the current trend in posters to make the head tilt sideways? First with "Merciless" movie poster with Siwan, then "Circle" character posters and now this.. :D But I am actually loving this style, it gives the feeling of shaking things up for the viewer.

It's suit with a thriller - action show.

If this drama hit daebak, Yang Se Jong will go so far and far on his carrer.
Confusing that Tunnel ending soon, but Duel starting soon too.
After Duel, what thriller drama I should watch? Save Me seems like a flop with weak stars as leads.

I also thought they were two different people.

So did I. For him to pull that off means he's really very good.

WHO is this Jung Jae-young and WHY am I just now finding out about him??? Hamana hamana hamana~ on a more serious note: this looks intriguing! I'm already hooked on the clone part.

Omg, how embarrassing. I meant to say *Yang Se-jong. Sorry ajusshi, but I was drooling over THAT guy.

The posters look great so does the evil Yang Se-jung!! I've been loving all the OCN dramas lately so will definitely check this out!

I am pretty excited for its plot, and of course, Yang Se Jong! Puppy is rising!

Wow that poster definitely got my attention. Didn't even know this drama was airing soon.

Love, love the posters, will definitely watch, the male actors are good as well. I hope the women are not weak.

I'm looking forward to this!

Yang Se Jong and Seo Eun Soo from RDTK. It's good to see them in a same drama again. I hope there will be a romantic relationship for them even I know the chance will be so small since this is a OCN Drama.

Perhaps a low key romance like that of Sunjae and Jae Yi (Tunnel) is possible. In RDTK, even though Do In Beom is always going around yelling and scolding Yeon Woo, I take it kinda like the more you hate, the more you love.

I actually thought the 2 clones in the first poster were different actors...

I don't know who Yang Se-jong is, as I've not seen him in anything, but hopefully he can pull off playing 2 different people because this looks like it could be really good. I am definitely interested in this drama.

I really did not notice Yang Sejong in RDTK since my attention has already been captured by Han Seok Kyu, Yoo Yeonseok and Seo Hyunjin BUT seeing the teasers and these posters, it seems he seriously upped his game for this drama. Looking forward to his performance in this drama