The hunt for the clone is on in new Duel teaser 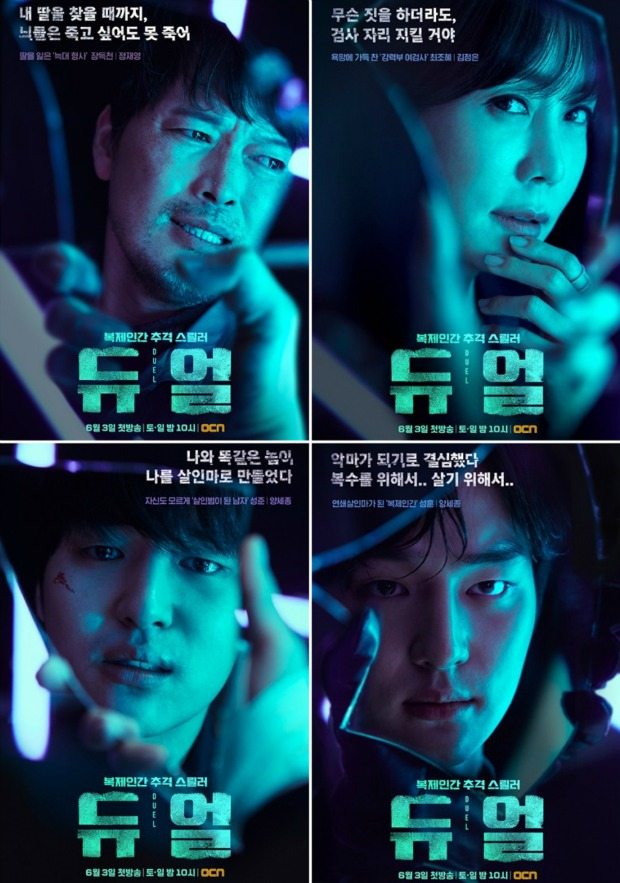 OCN has finally released a longer teaser for Duel, along with new character posters and stills. I really wanted more information on this drama, so I’m happy that the production is ramping up their promo. Duel is OCN’s human-clone-pursuit-thriller where a detective’s daughter is kidnapped. Two clones, divided between good and evil, are the key to solving the case.

Jung Jae-young (Assembly) is the detective on the hunt for his daughter. The new teaser opens with a tender moment between father and daughter as Jung Jae-young greets her and lovingly sits beside her in an ambulance. But then the scene takes a turn as Yang Se-jong (Saimdang, Light’s Diary) bursts into the ambulance and attacks Jung Jae-young, seeking to drug him. Jung Jae-young is able to rip the mask off the clone before succumbing to the drug.

When he comes to, his daughter has disappeared. The hunt begins as he rushes through subway trains, crashes through windows, and flies off bridges in pursuit of the clone. There are appearances from both the good and the bad clone, which echoes back to the common refrain of this drama: “On the day my daughter disappeared, I saw two men who looked exactly the same.”

Kim Jung-eun (Make a Woman Cry) makes a brief appearance as the ambitious and elite prosecutor when she says, “Let’s conceal this case.” But Jung Jae-young isn’t having that as he yells, “My daughter is alive! She is definitely alive!” It’s not clear whether his daughter is alive or not, but one thing is for certain—Jung Jae-young believes she is and through hell or high water, he is going to find her.

OCN also released a bevy of posters and still images that showcase each actor in their roles. In the character posters above, Jung Jae-young’s poster reads, “Until I find my daughter, you can’t die, even if you want to.” Kim Jung-eun, who is making her two-year drama comeback, looks conniving as the ambitious prosecutor. Her copy reads, “I will do anything to keep my position as prosecutor.” And of course, Yang Se-jong gets two posters, one each for the good and the bad clone. The copy on the good clone’s poster reads, “Someone who looks just like me made me a murderer,” and the bad clone’s reads, “I decided to be evil. To get revenge, to live.”

Okay, I’m intrigued. I really want to see how Yang Se-jong handles these two roles against a veteran like Jung Jae-young. It has only been a year since his debut and he already has this major dual role, which will probably make or break the suspense element of this drama. No pressure.

Duel will premiere on June 3, replacing currently airing Tunnel at the end of its run. 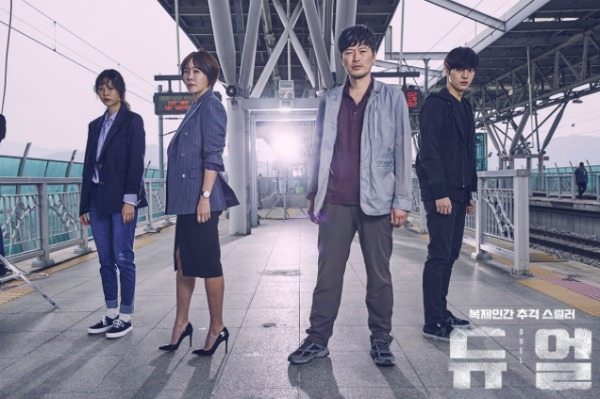 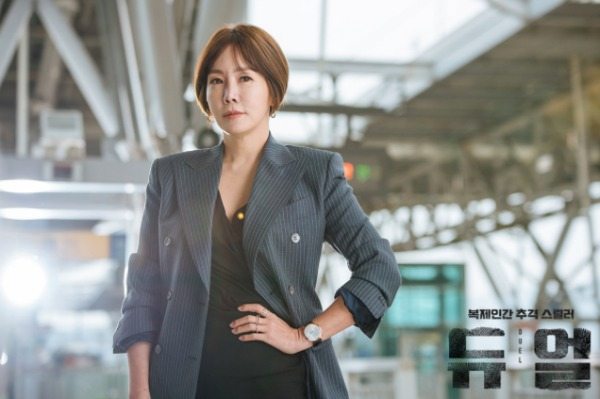 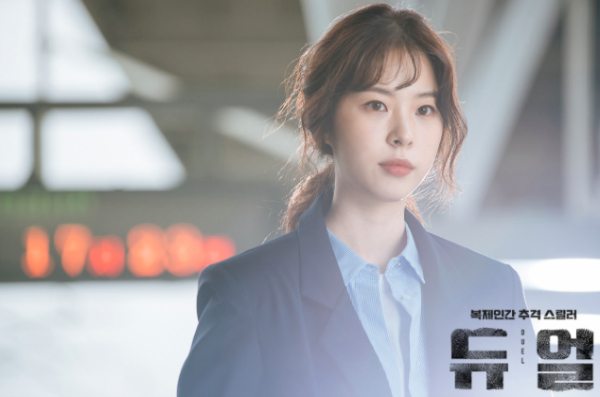 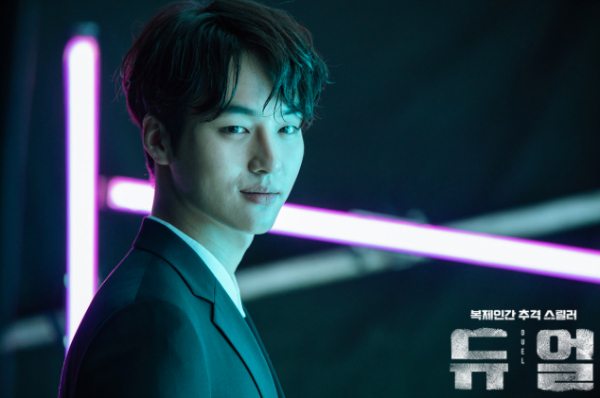 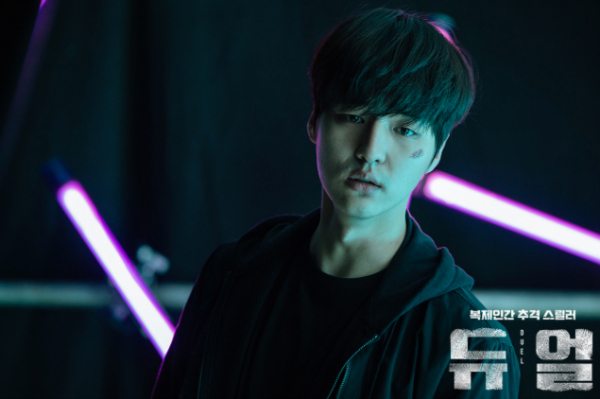 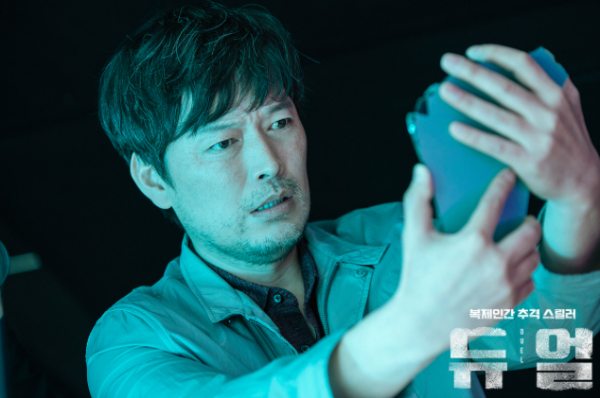 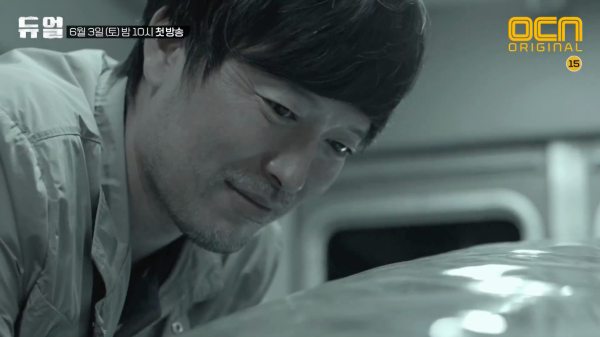 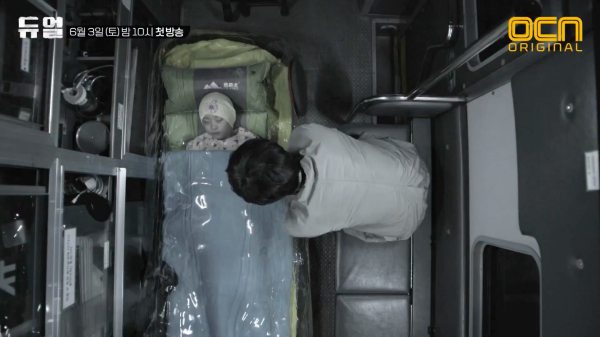 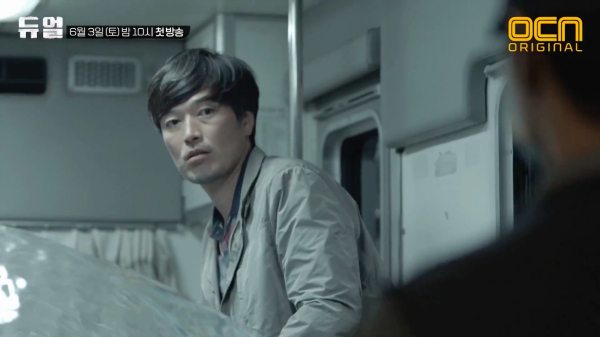 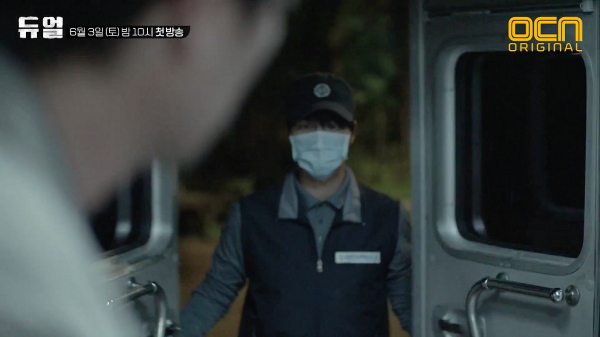 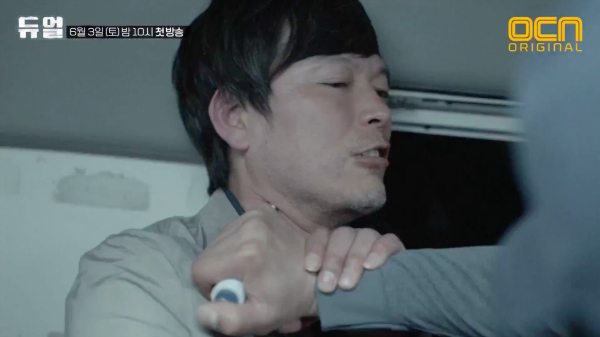 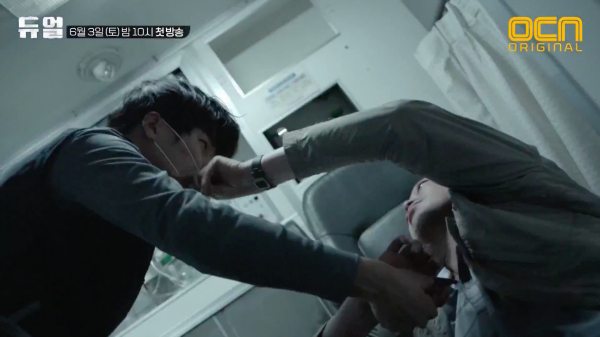 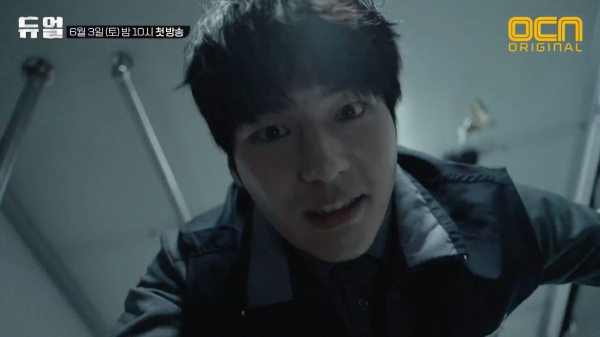 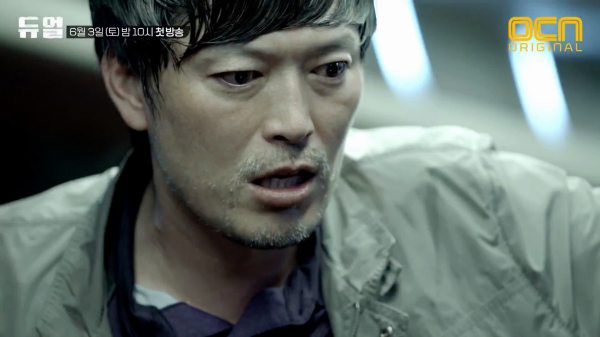 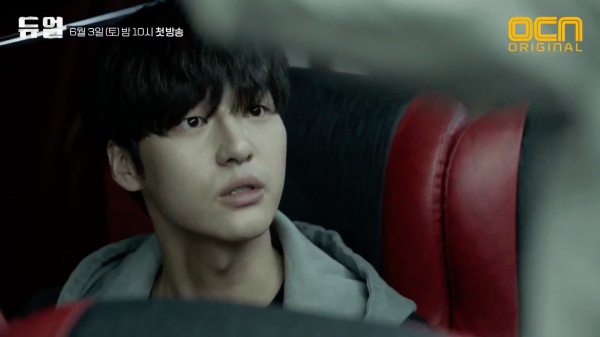 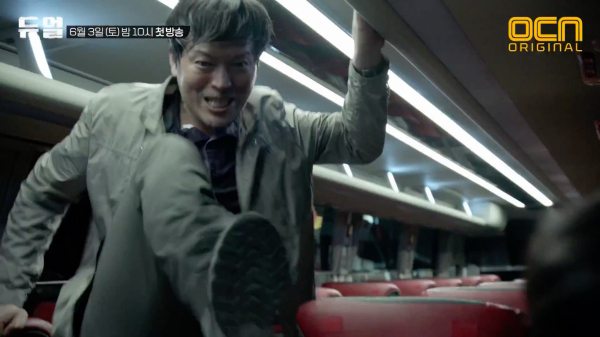 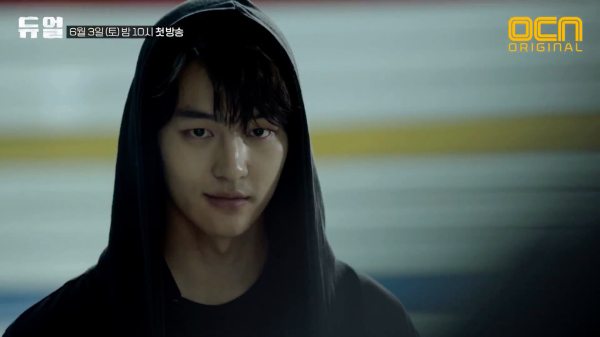 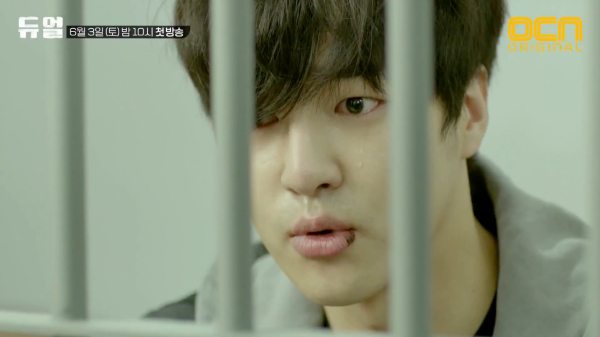 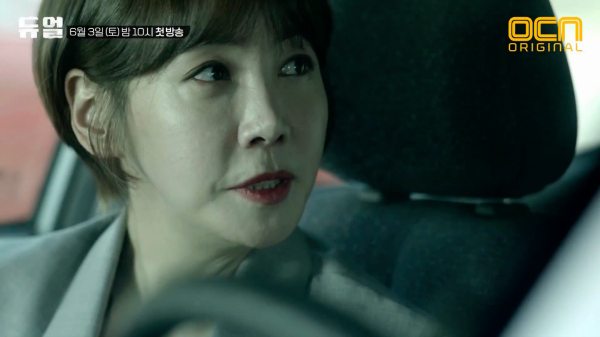 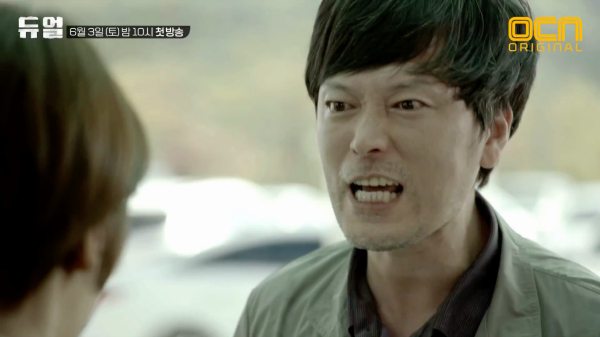 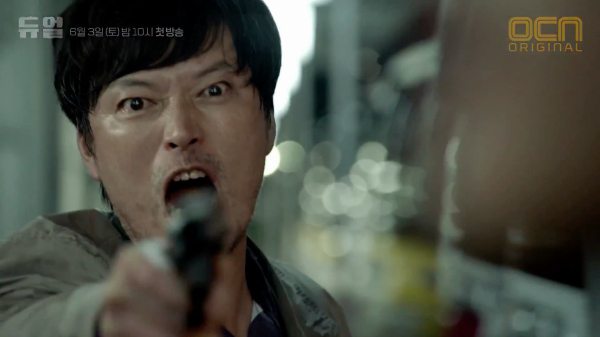 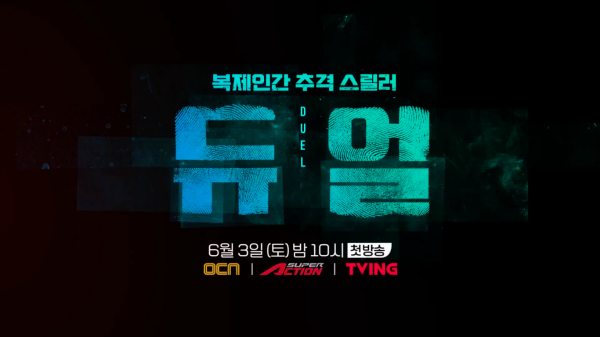 Excited for this. Hopefully it'll be as good as or maybe even better than Tunnel.

I like all these datk thrillers that are coming out recently. Excited for this show. Fingers crossed. ?

me too. I'm too excited to wait all drama! Hope they will not disappoint us.

This looks really good. I've personally never seen Yang Se-jong in anything but he has me convinced he is 2 different people from the teasers and posters. Hopefully he will be able to carry that to the actual drama.

Gotta watch this show. It's on OCN!
LOL, but really, it looks super thrilling.

Besides the main plot, the bad clone has some personal story about revenge. I hope this drama will be well-developed and unique.

I think Yang Sejong did well in Dr Kim so I'm really looking forward to his performance in this drama.

I'm liking the dark hair he has in Duel, his hair was a weird color in Dr. Kim, haha.

I feel like everyone is always losing their daughters. Jung Jae-young, Lee Shi-young in Lookout, Ji Sung in Defendant, Kim Soo-hyun in God's Gift...

Hahah yes omg it's like nope it can't be a son or anything. Maybe it's to do with gender stereotypes of guys being more likely to survive or fight off enemies by themselves, while girls are seen as being weaker?

Thanks for the update, Buhdoop!

I'm getting Kafkaesque vibes from the new posters and pictures.

Yang Se-jong's gig in SAIMDANG, LIGHT'S DIARY was a dual role, and I think he did well in it. The modern timeline was part thriller, part academic sleuthing, and part evil chaebol angstfest with a side of skullduggery, with corrupt politics and a jealous king on the throne in the past timeline. The Joseon character was a passionate young artist from a noble family who was deeply in love with a young and feisty Saimdang, while his modern counterpart was an white-hat art history grad student. I thought he acquitted himself well in both characterizations, and think he can pull off this dystopian-sounding dual role. Send in the clones!

Main actress is really killing my hype. Too bad.

Just looks like too much plastic surgery to me...

For a moment I thought it was onew.

The evil clone is smoking hot, damn <3
And... it feels like it was just yesterday that I was watching Lovers in Paris (even though it has been years), Kim Jung Eun has aged so much :o

I liked the first set of posters better. It's OCN so I'm going to try anyway.

I'm in it to see Yang Se Jung. I haven't watched him in anything but I'm really blown away by his posters alone and how effectively different the 2 clones look: the tears vs the evil eye gives me goosebumps cos it looks like 2 different actors! O_o

This drama does look promising

I'm trying to choose between this one and Lookout and Circle and I can't decide. They all look good.