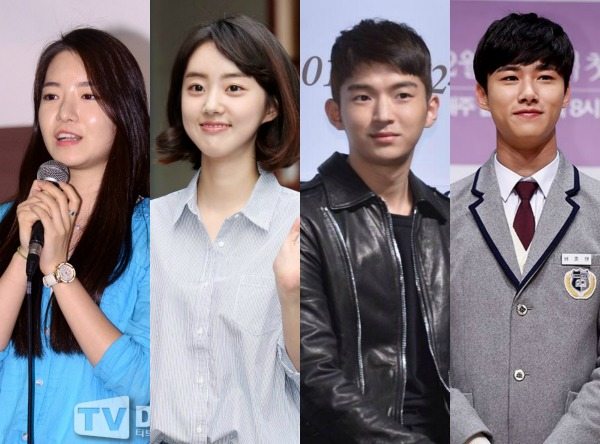 Out of the four, Ha Seung-ri has the longest list of credits by far, having debuted as a child actor in 1999. Since her debut, she’s steadily received small supporting roles, the most memorable of which were her guest appearance as a convenience store temp in Chief Kim, and as a young Choi Ji-woo in Twenty Again. Coincidentally, Kim Hee-chan also appeared in the tvN show as a young Lee Sang-yoon, making this one of several reunions among the cast of School 2017. Kim Hee-chan is also part of another drama reunion with Park Se-wan, whose full-length drama debut was Radiant Office, and Han Sun-hwa, who has since confirmed her role as a detective assigned to the high school. I also look forward to Seo Ji-hoon joining Jang Dong-yoon because they were both so good in Solomon’s Perjury. Seo Ji-hoon debuted in Signal prior to Solomon’s Perjury, and was also in the drama special Legendary Shuttle.

Their School characters are pretty diverse, which should make for some interesting classroom dynamics: Ha Seung-ri will play a school bully who will meet her match in Han Sun-hwa’s police character. Her troublemaking has forced her to transfer schools multiple times and she’ll start out the show having taken a year off because of her actions. Park Se-wan, on the other hand, will play a bright, outgoing student who is best friends with lead Kim Se-jung of Gugudan, and although she has a cute outer appearance, she’s described as an ajusshi at heart. Love her already.

Seo Ji-hoon will play a free-spirited musician with little interest in his fellow students, and school in general, and likes singing wherever and whenever. Hah, he sounds a little like he lives in his own world. Whereas Seo ji-hoon’s character is completely disinterested in academics, Kim Hee-chan’s will care a little too much. He attends expensive after-school tutoring sessions in order to get the grades to satisfy his prosecutor father’s high expectations. His story isn’t anything new, but it still hurts my heart when I see high school students like him run themselves ragged to meet their parents’ unrealistic standards. I can tell Kim Hee-chan is going to steal some of my tears in this show.

I’m really liking the young cast so far and I hope that some, if not all, will give breakout performances so that the show is a jumping-off point for successful careers, as their predecessors did. School 2017 will follow Fight My Way and premiere in July in the Monday-Tuesday slot.

Via Herald Pop, My Daily

Will still give it a try even though my Yoo Jung wouldn't be part of it.

Park Se-Wan was wonderful in her too short moments in Radiant Office - thoroughly deserved a bigger role.

I loved her in RO! My cutest secretary! She also played one of the ghosts in Goblin.

Another year. Another School series.
I'm looking forward to these new characters and rookie actors/actresses. For one thing, School series has been great at helping young stars breakout. So, I am definitely excited, but don't take away my Dong Man and Ae Ra moments.

Oh yes!! I like these young cast too. Hopefully the drama will be doing great and boost their name in the industry.

Really looking forward to seeing Seo Ji-hoon on my screen again. I liked him in Solomon's Perjury

Same! I honestly hope do he could would be casted after I heard that Jang Dong Yoon would be cast. Lol but I find it funny that Park Se Wan a playing a character that's like Sejeong in real life. As a fan of Sejeong and the School series I'm praying that this show will be good. Fingers crossed for it to be like School 2013 (which was one of the greatest shows ever) and not School 2015 (where I wanted to tear my hair out in the second half because the second male lead was clearly so much better than the male lead but she didn't pick him!)

Was thinking the same thing, I really hope 17 will be more like School 2013 rather than 2015. 2013 really captured what it feels like to be in high school, everyone gave wonderfully raw and subtle performances. 2015 personally felt more like a regular over-the-top rom/sit com for me, i was a little disappointed with it. I hope 17 is more like 13 in those aspects.

YAY!! My wish has come true. The drama gods are listening!!
I have a soft spot for Seo Ji-hoon after watching him in three projects: Signal, Solomon's Perjury and Legendary Shuttle, where he played three completely different characters so well. He's a promising young actor, and although his role here seems to be a minor one, I hope he can make the most of it and use the School platform to gain acting experience as well as help him gain more public exposure.

This is actually so nice to see. Rookies getting a chance to shine and I hope a few of them will be able to have a big break like Lee Jong-suk and Kim Woo-bin.

a LOT of them have been promising in their minor roles in others dramas, so this is going to be their big chance to shine, no doubt.

I fell so hard so fast for SEo Ji Hoon after watching him in 'Solomon's Perjury' and I can't wait to see him in something new!

Looking forward to this a great deal, can't wait. Mostly Kim Hee-Chan's character sounds like it will tear my heart out.

Yasssssss for Seo Ji-hoon!!! Drama-Gods do hear my prayer after all. And he's gonna reunite with Jang Dong-yoon on top of that. Wah what a delightful news in this early morning.

That Kim Hee-chan is Seol's cute lil bro right? Can't waitt although I don't want to part way with Dong-man and Ae-ra yet.

New drama means Fight My Way will end soon. I am not yet ready.

I like Ha Seung Ri and Kim Hee Chan in their previous works, Twenty Again and Chief Kim. And based on description the show has strong supporting cast. Wish them all the best!

*smh* Han Seung Ri is '95 liner, same age with Nam Ji Hyun. NJH is already playing female lead as a lawyer, but HSR still stuck at school roles, and not even main lead. I saw her in some drama and I think she acts well. Well, I can't wait to see Han Seung Ri becomes a scene stealer in this drama. Even her short appearance in Chief Kim was quite memorable for me (esp her interactions with Chief Kim and Puppy Yul lol). If she will be a school bully, there's every single chance she can be a scene stealer. Well, there must be some interactions with Mori as well, right ?

Looking forward to see more of Park Se Wan after RO. I have a feeling I will like her in this series as well.

I clicked so fast when I saw Seo Ji-hoon in the thumbnail. He is an up and coming young actor to watch for. He was so good being bad in Signal, so adorable in Solomon's Perjury and a hot jock in Legendary Shuttle. Really looking forward to this installment of school!!

*getting keener and keener*
I really hope they dont give me an ending like 2015... If they do I am going to cry. Like actually cry

Yes, I'm here for my puppy seo ji hoon!! He captured my heart in Solomon's perjury! Good luck my puppy. Break a leg!

I AM SO READY FOR THE ROOKIE PARTY. ALSO SEO JI HOON YES IAMSOREADY CHILDREN MY LOVE OMY

I've lost track of who is in this drama, with the news coming in one after another. This is a good sign that there are so many good rookies in this, I'm very hopeful about this season.

I'm impressed by Ha Seungri in Twenty Again. and a reunion with Kim Heechan is welcomed. Looks like everything is in order for School 2017

definitely going to watch this. Seo ji-hoon nailed every role he's in so far. Kim hee chan, the gong hyo-jin's younger brother in Producer. he was cute then. haven't seen him anywhere on my radar after that. hope to see more of him.