When a young chaebol heir falls into a coma, his mother, a neuroscience and AI expert, replaces him with a decoy: an android she's created that looks just like her son. This android must pretend to be human so no one learns the truth, but his mission proves a complicated one.

When a young chaebol heir falls into a coma, his mother, a neuroscience and AI expert, replaces him with a decoy: an android she's created that looks just like her son. This android must pretend to be human so no one learns the truth, but his mission proves a complicated one.

Lee Jun-hyuk, Park Hwan-hee join Are You Human Too as second leads 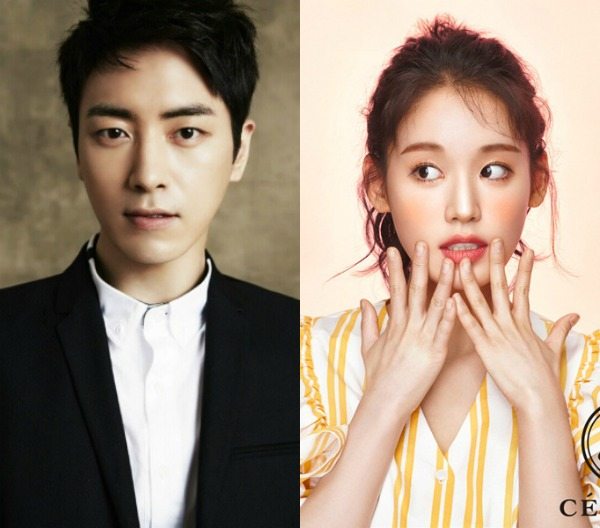 We’ve got the second leads lined up for the “grand scale human impersonation scam” KBS drama Are You Human Too. Lee Jun-hyuk (Forest of Secrets) and Park Hwan-hee (Jealousy Incarnate) will join leads Seo Kang-joon (Entourage) and Gong Seung-yeon (Circle) in the unusual love story between an android and a human.

Lee Jun-hyuk’s character, Ji Young-hoon, is an accomplice in the “scam” that replaces the comatose Nam Shin, played by Seo Kang-joon, with an identical android in a bid to maintain his position as heir to a chaebol conglomerate. Young-hoon is Nam Shin’s secretary and only friend, and is described as a warm, easygoing person who is also pragmatic and realistic when carrying out his duties in his official capacity. His background is tied to Nam Shin’s company, PK Group, in that he was raised in an orphanage that the conglomerate funded, and went on to become a top student at a university also backed by PK Group.

Park Hwan-hee, on the other hand, will play a character who is more a victim in this human-android switcheroo. She’ll play Seo Ye-na, a client of Gong Seung-yeon’s bodyguard character and Nam Shin’s fiancee, whose father is a high-up director at PK Group. She was practically groomed to become Nam Shin’s wife, and her mother is particularly eager for their impending marriage, to better their family’s position in the intra-company politics. Ye-na sounds like the sheltered type, described as pure and someone who helps herself to whatever she desires. Well, she’ll be in for a rude awakening when her android fiance falls for her bodyguard.

Lee Jun-hyuk’s having a good year with some pretty high-profile projects: He’s currently killing it as a scheming prosecutor in Forest of Secrets, and we’ll be able to see him in blockbuster film With the Gods later this year. I loved him as the upright, moral prosecutor in City Hunter so I hope he’ll land a lead role soon, but I’m just happy he’s returning in what sounds like a really interesting show. Park Hwan-hee, I’ve seen less of, but I remember her being cute as a nurse in Descended From the Sun, so I’m hoping for the best, even though I’m worried that her character might infuse too much chaebol politics into the show.

Now that our main leads have all been cast, shoots for Are You Human Too are due to begin soon, with a target air date of sometime this fall, though KBS hasn’t confirmed its slot yet.

Tags: Are You Human Too, Lee Jun-hyuk

heyyyyyyy. it is science fiction again. are dramas sucking up to me lately or what? throwing in Lee Jun Hyuk, at that.
I dont mind at all, keep at it. please please keep at it.

Haha, no complaints here either. Scifi is my favourite genre! I hope this trend continues for a good while yet and we get more great mutant genre dramas out of it!
???????????

The cast is becoming more rounded out and I am for sure going to check this show out. Although I didn't see their previous works besides Descendants of the Sun, I hope they will do a great job. I wonder how the robotXhuman dynamic will turn out after adding a chaebol and a fiancee.

I find it ironic that the actress who plays is-she-human-or-not Byul in Circle will be playing a human in a show where someone else isn't human.

I can't wait for the comedic hijinks between robot SKJ and LJJ. Theres got to be a lot please

kbs is churning out interesting dramas this year ?

Even when the drama was "meh", "My Secret Romance" has for sure raised the bar in 1 thing: The Boss & Secretary Relationship pairing... Seriously, from here on out, every time dramaland gives me a subplot/side relationship of a Boss and his/her secretary, imma hope and expect it to be "My Secret Romance" levels XD Could this possibly be considered a catnip? hehe

I love this guy in Forest of Secrets (ok maybe "love" is not the right work; he's slimy but awesomely so) therefore am excited to see him get more work. It'll be interesting to see him play another toady/employee type position but this time as part of the good guys :P

You should also check out City Hunter, where Lee Jun-Hyuk did a fantastic job as this incredibly principled fighter for justice, and also City Hall, where he again played a good guy/bad guy sidekick. I really like his work and am looking forward to this because of him!

I think I will like this more. We already have cheerful Gong Seung-yeon, and they add Park Hwan-hee as sweetener.

I agree, they should just switch the male lead with second male lead, Seo Kang Joon is just so bland.

But Lee Jun-Hyuk isn't that good of an actor, I watched him in Bluebird and he was so boring there

It's more on his character that was more boring in Bluebird, what more there was Lee Sang Yeob whose character had more depth.. I don't think he is so great but if Seo Kang Joon can be the lead, why not him?

Well, don't know about Bluebird but he is currently doing very well in Forest Of Secret and I loved him in City Hunter. His facial muscles atleast moves while emoting. So I'd say he would be better than the current lead.

It was the way the character was written, not Lee Jun-Hyuk as an actor. You need to see some of his other work, like City Hunter and City Hall, where he is definitely NOT boring.

I hope Lee Jun-hyuk plays a lovable second lead this time. He's good at being a smugly evil prosecutor in Forest of Secrets but I miss his righteous prosecutor persona in City Hunter.

Someday, someday, Lee Jun-Hyuk is going to get the girl.

His prosecutor roles in CITY HUNTER and FOREST OF SECRETS are so different even though both are prosecutors. In one he is an honorable man in the other he is a total slime. From his facial expressions alone you can see his character. Great acting.