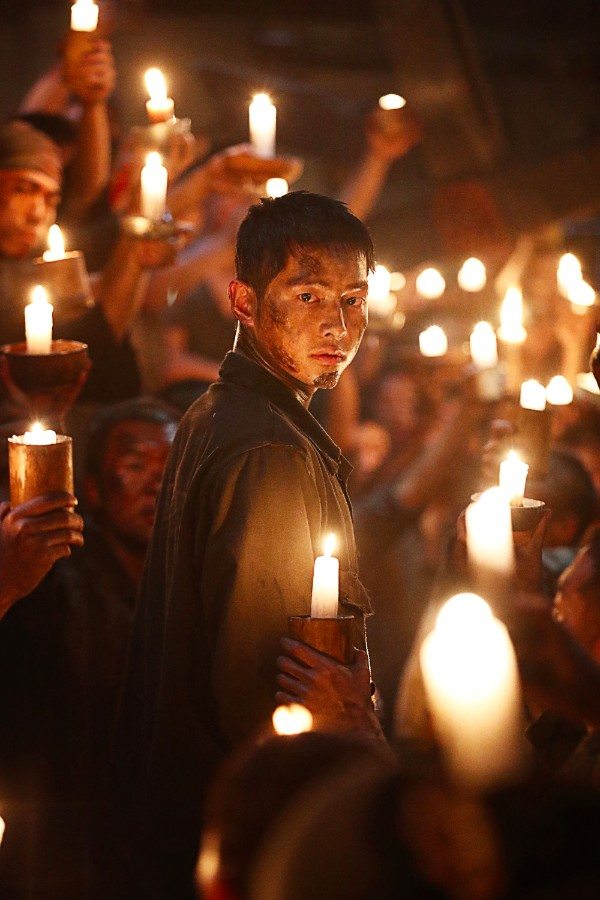 Director Ryu Seung-wan, who helmed Hwang Jung-min’s 2015 blockbuster Veteran, is returning this summer with a new film starring Hwang and two of the hottest stars in Korea: Song Joong-ki (Descended From the Sun) and So Ji-sub (Oh My Venus). This upcoming film, called Battleship Island, is set during the Japanese occupation and is based on a true story about a massive prison break from Hashima Island, a small island off the coast of Japan nicknamed Battleship Island for its shape, and the site of a forced labor camp.

The first trailer is entirely in Japanese, narrated by an officer who tells a group of Joseon laborers about their expected wages and living conditions as they go further and further underground. But the Korean copy that flashes in between the graphic scenes of forced labor in the mines several thousand feet below the ground reads: “We cannot escape or die. We called this place Hell Island.” As scenes of their harrowing attempt to escape the labor camp flash by, another officer says in voiceover, “We cannot let a single Joseon person remain who remembers what happened here.”

Hwang Jung-min plays a traveling musician who is a dedicated father to his young daughter. While attempting to get to Japan, they are transferred to Hashima Island instead, a place where the Japanese have oppressed both Joseon and Chinese people into slavery, working them without the freedom to leave or even the barest of necessities like clothing or food. So people die like flies under the harsh conditions, but no one comes to this far-off island to help them because they never hear about the human rights violations happening there.

However, even in the darkest places, hope can survive, and that occurs in the form of an idea amongst the prisoners: to stage a large-scale escape from the island. So Ji-sub plays a street fighter who becomes one of the leaders of the prison break operation, and Song Joong-ki plays a Korean independence fighter who initially goes undercover to Hashima Island to rescue a key figure in the movement.

The intertwining story of these three individuals as they work together to make their way to freedom will be told through Battleship Island, which premieres this July. 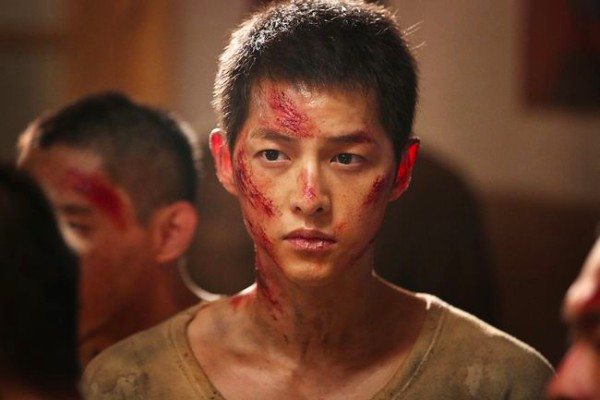 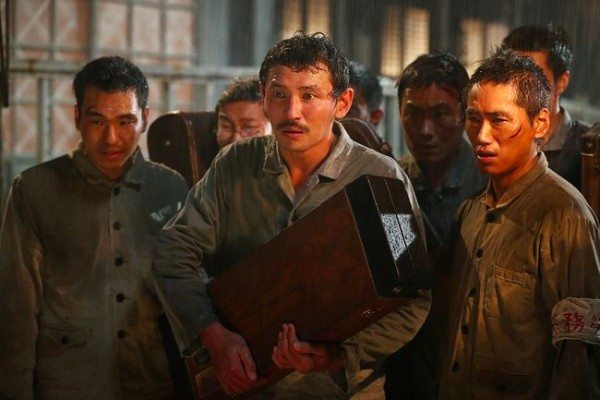 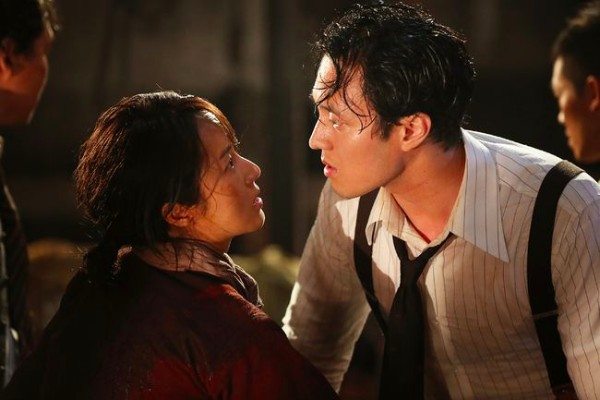 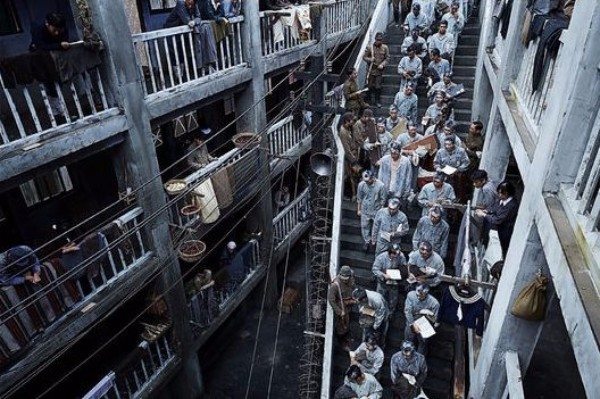 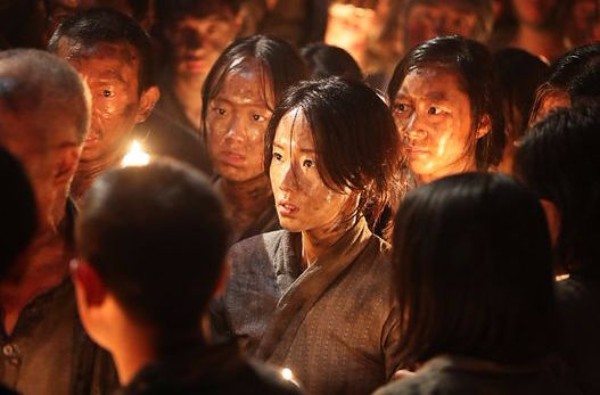 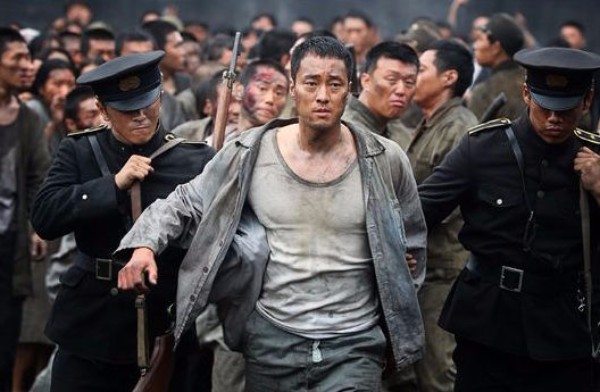 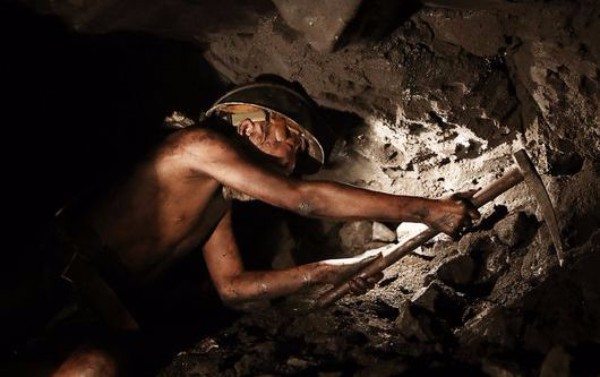 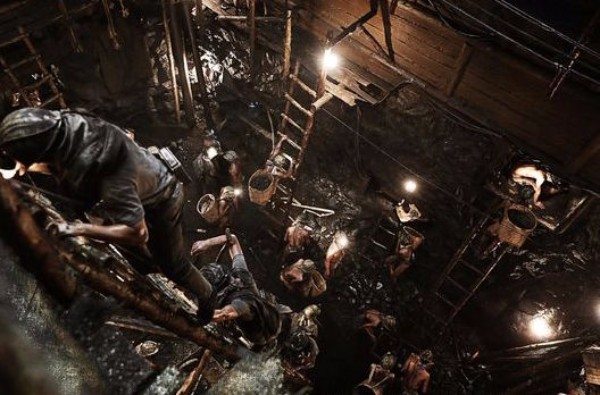 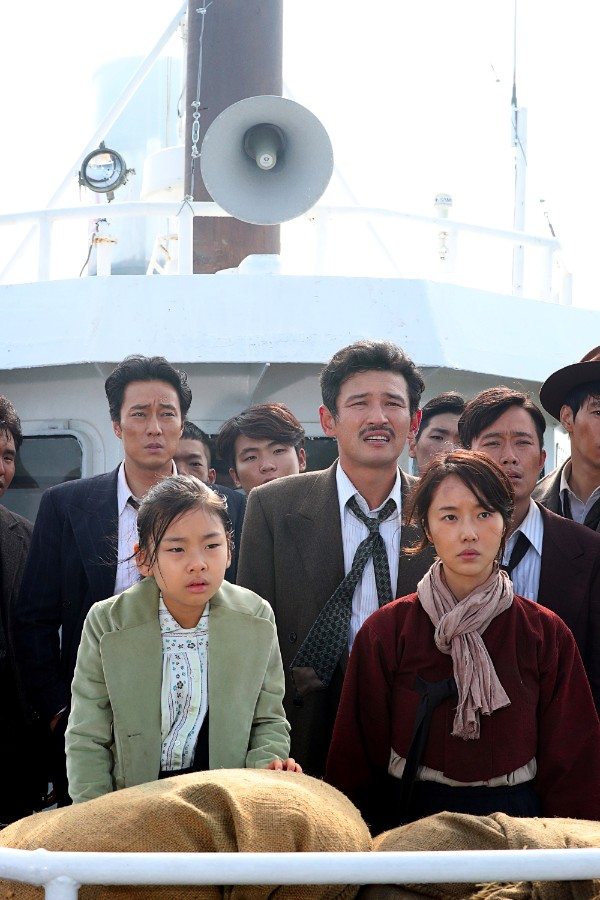 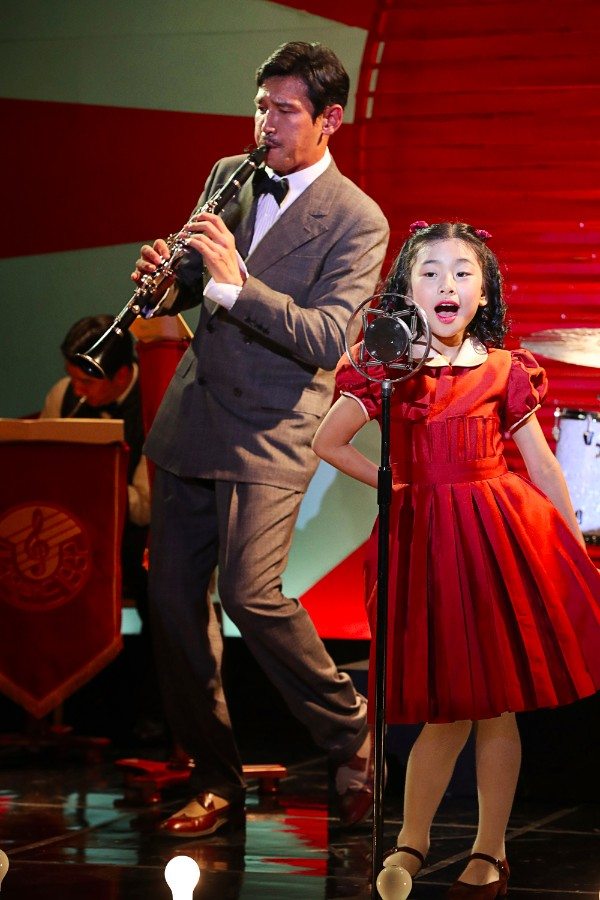 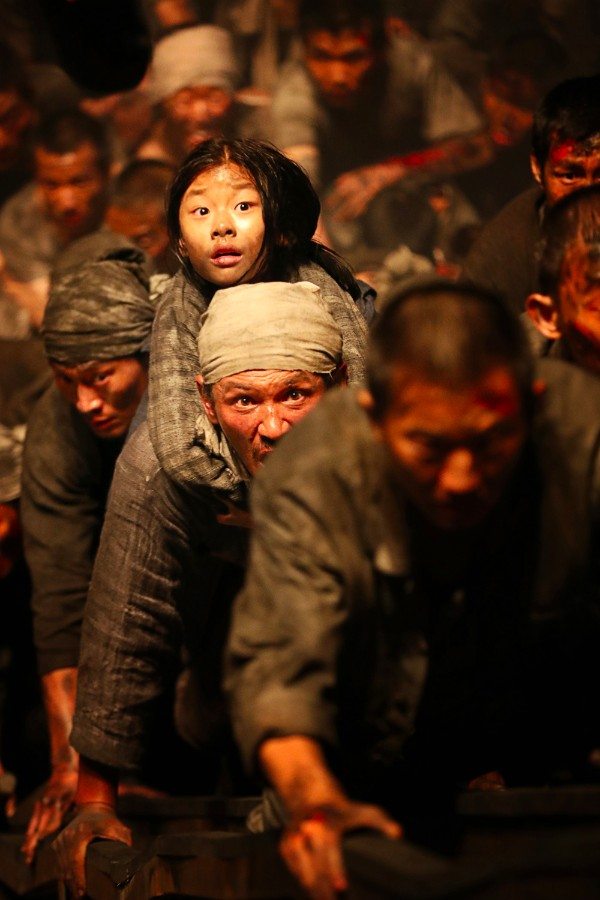 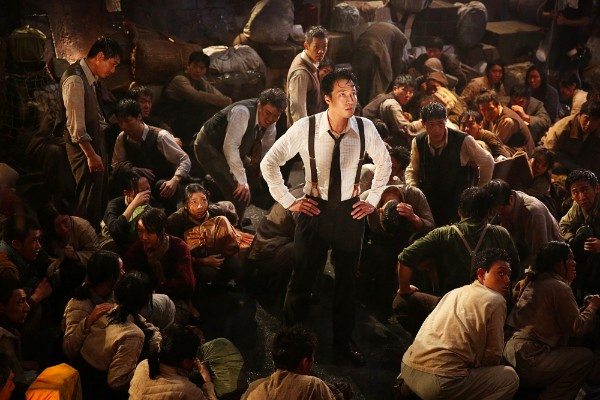 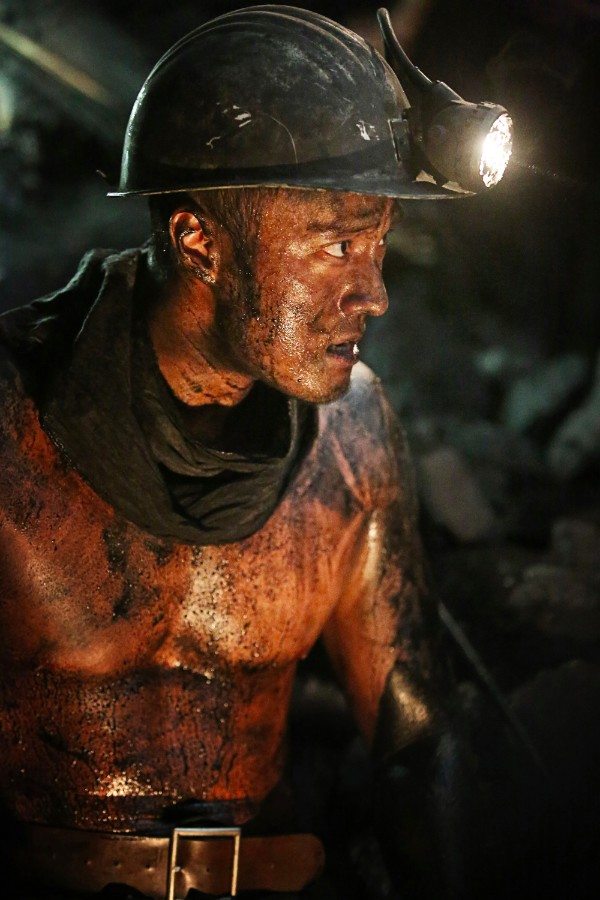 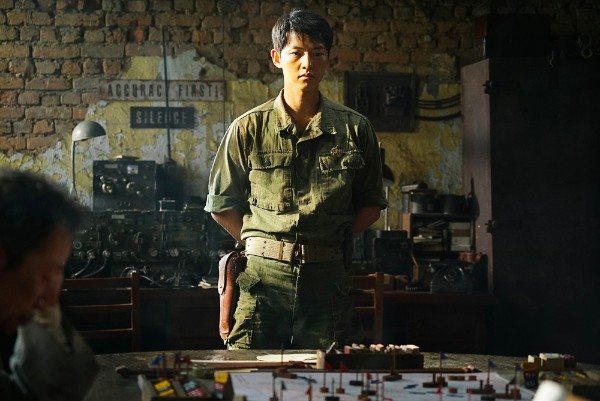 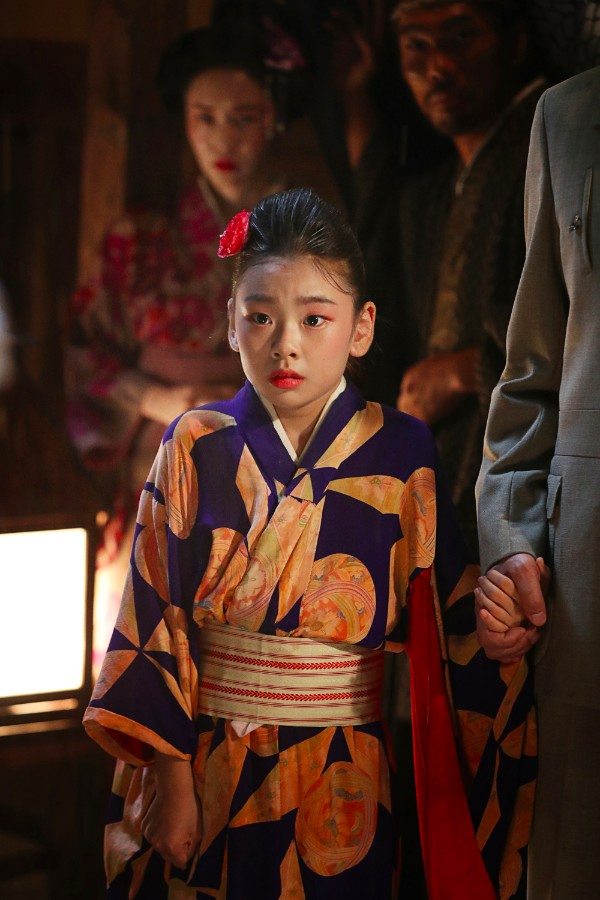 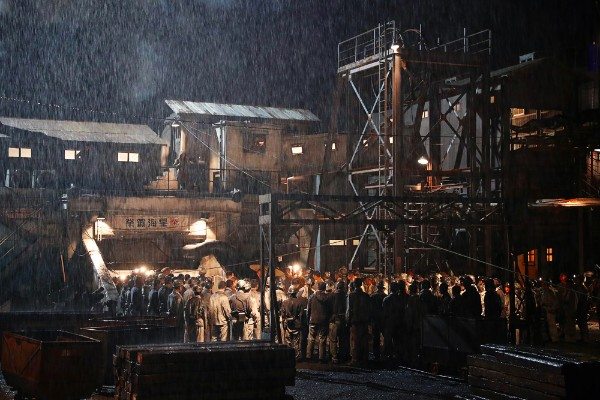 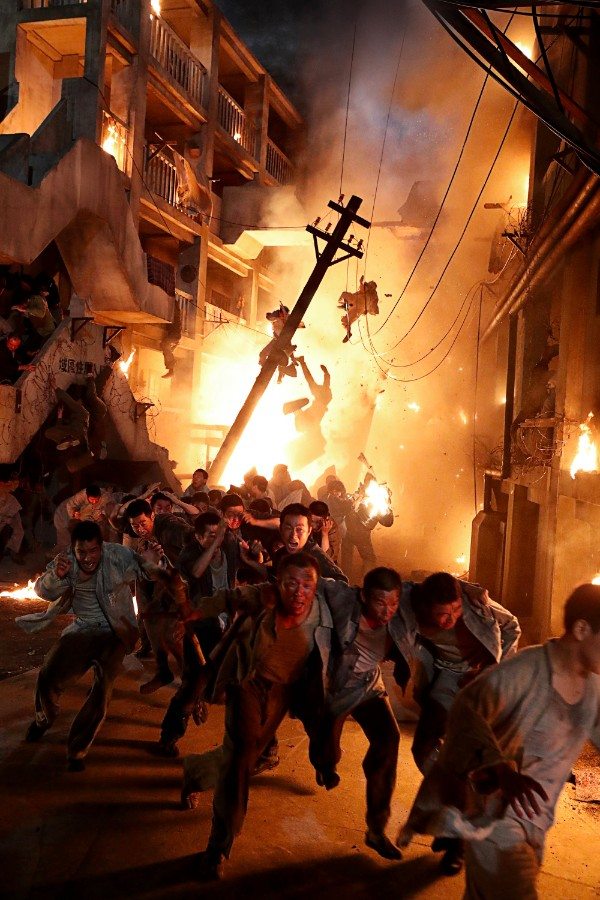 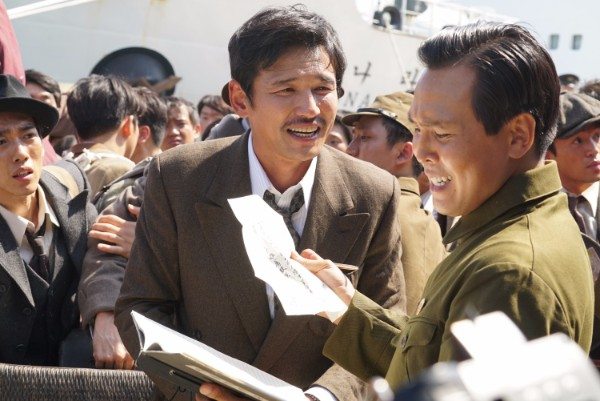 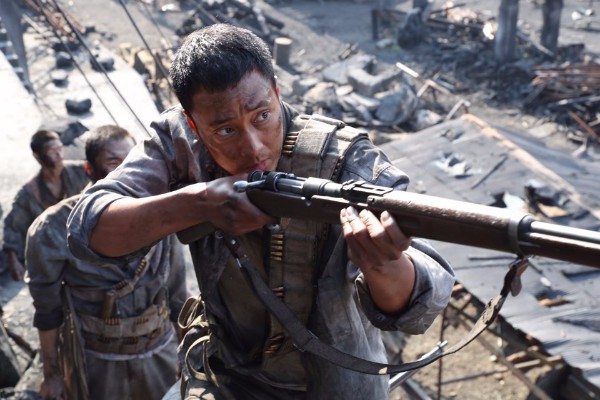 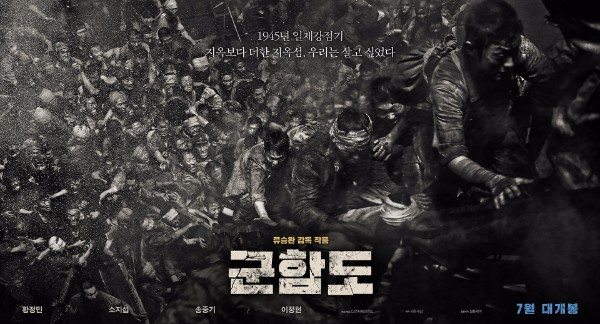 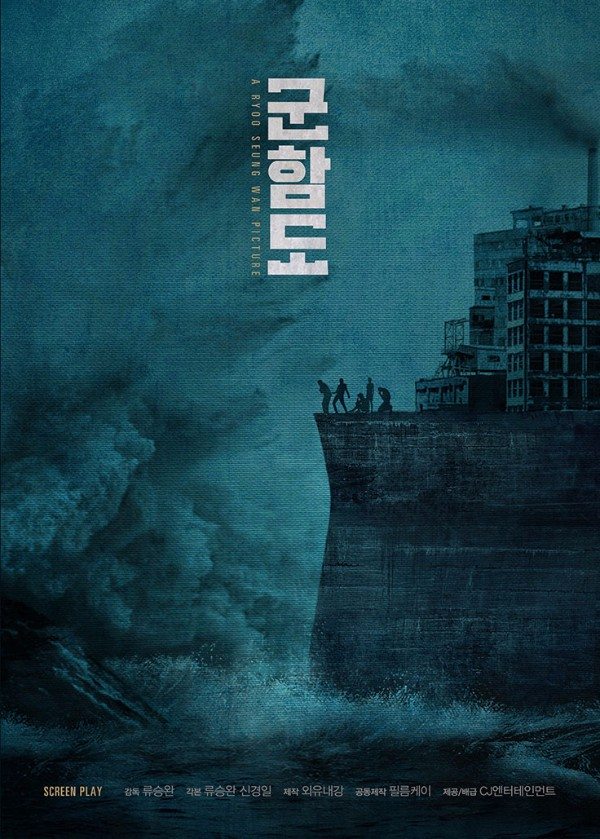 This looks great I can't wait to watch it, seems like directors are making more japanese occupation era movies but I wish they could make a movie about comfort women. Their stories break my heart nd they deserve to be heard ...

There is a movie about it.
It's of 2015 and there plays the amazing actress of Mirror of The Witch. Kim Sae Ron, who was famous since year ago from playing in The Man from Nowhere with Eon Bin.
The movie title is Snowy Road.
http://asianwiki.com/Snowy_Road_(Korean_Movie)

Snowy Road/눈길 is actually not a movie but a one-off drama on KBS, written by 유보라 (Secret) and directed by 이나정 (Fight For My Way, Nice Guy). Spirits' Homecoming/귀향 has been released in theaters and was a surprise indie hit last year. Battleship Island is the first time labor camps on Hashima have been addressed in any medium, except for the special episode on Infinity Challenge.

I believe Snowy Road was a 2-episode drama special on KBS in 2015. However, the drama was re-edited into a movie and released on March 2017 in Korean theaters. It got pretty good reviews from what I've read. I don't think it did too well in the box office.

You are right about Spirits' Homecoming. I believe that movie had trouble getting financed and distributed because of the subject matter. It ended up being partially crowdfunded.

@Yanca
Some dramas dealt with the comfort women. "Eyes of Dawn," from what I've seen, was a very well done depiction of the process and the trauma. It's quite old so it's a bit hard to find, but it's out there and someone subbed it. I think MBCClassic has it up on YouTube raw and split in parts. It's under "Years of Upheaval."

"Eyes of Dawn" was raw and so real. Masterfully directed by the late Kim Jong-hak.
I don't think I'll ever watch it again but I will never forget it.

Have you seen Gaksital?

"Eyes of Dawn" if you can handle it. One of the 2 masterpieces written by Song Ji-na.

everything I've heard about it is excellent but even the trailer is harrowing.

Yeah, I suggesting if any of you want to watch this movie have a few box of tissues ready. I knew it would be sad, but I didn't expect to cry as much as I did and the worst part was that I watched it late at night so I had to stop half-way through and prepare myself to watch the second half the next day. Just watch it all in one sitting because I think it will easier to handle.

So Ji Sub is one of my favourite Korean actors.. I am BEYOND excited to see this movie!! Song Joong Ki is just bonus!!

This sounds really interesting but where do you watch it? Are there sites like Viki but for movies or do you have to hope it comes to a theater near you?

It has been sold to a 113 countries so hope it comes to a theatre near you.

amen. I can't wait to watch it in my big screen

Thanks, I'll keep an eye out for it.

I've been waiting for "Battleship" for a long time. It's too big of a movie not to have a worldwide release.
It's going to be difficult to beat "Veteran" when it comes to profits but it'd be up there.

OK, this trailer sent shivers down my spine. *epic feels* As a big fan of The Great Escape and classic American WWII films (Sands of Iwo Jima etc), I'd be really excited to see this Korean take.

My local cinema showed Age of Shadows recently but I missed it *sobs for slow-mo missing Gong Yoo*. Fingers crossed they'll bring this one too!

*puts on Movie to-watch list* July you say... do we know what date?

The movie has been presold in 113 countries including France and is already considered one the highest priced Korean movie sold in Asia. It's not everyday you get the chance to watch a Korean movie in France let alone watch So Ji Sub and Song Joong Ki on a large screen.

I'm particularly curious about the story as I have a special interest for movies and dramas set during the Japanese occupation. (I still watch Gaksital on a regular basis). Looking at the trailer it is going to be a tough but needed story to tell.

Really? It will be released in France?
That's a great news! I'm really looking forward it, I hope I will be able to watch it on the big screen!
Like you, I like movies and dramas set during the Japanese occupation, I wish there were much more about that.

Definitively watching this. Song Joong Ki Oppa I've missed you! Feels like it's been ages since he made this movie and cut his hair short.

Please be available to watch on the big screen here so I can support you!

Anything related to war is not my kind of movie. I watched Ghibli's Field of Fireflies once, and it's scarred me until now. War devastates everyone. But damn, look at what they offer here; SJS, SJK and HJM.
The adorable little girl is Gong Yoo's daughter in Train to Busan, right?

This will be one of those good, but hard, movies to watch. I have been waiting for it since last summer.

so ji sub so freaking hawt in that pictures

Oh, I saw Big Boss over there..

I have been looking forward to this movie. SJS is enough reason for me to watch it.

Looks cool. I like war movies (if they are executed well & if it's about the untold/buried history). They touched my heart and I will cry a river.

18 Playstore, Okay Or Not Okay

Give our man Joong Ki a drama ASAP. The captain needs to save lives by a 20 ep drama now that he ain't got no enlistment like some *chokes on the names of the oppas* do. HAEBAAA *screams in hangeul*

And yes I shall watch Battleship Island even without subs when it shall be released :) somethings can't be put on hold.

The stills look spectacular! Hope the movie lives up to these and our expectations!

20 bebeswtz❣️Xiao Zhan is the sunshine in human form ☀️

Oh man (no pun intended), 3 powerhouse names of Chungmuro and the small screen coming not only coming together, but coming together to for such a grand, and quite hopeful and inspiring (the part where they even find the hope to consider escaping) tale of such epic proportions??? Count me in!!

I bet it's gonna be a big hit at the box office.

And, you simply can't dampen Song Joong-ki's handsomeness with mere mud and blood, or being in an underground labor camp.

Hwang Jung Min is the living legend?❤️ Nothing could go wrong with one of the best chungmuro actor

Movie stars 3 of the biggest names in korean. The movie is sure shot hit. Looking forward to it.

There has been movies with big name and still considered 'flops' at the box office. This one however, looks to have everything going for it, including the big names, so your prediction is safe.

Sounds interesting and the imagery here is stunning. I don't know much about cinematography or photography but the use of light and shadows really makes it pop.

Diable.
This movie looks absolutly amazing. I don't often go to the theater i'd rather have my little confort in my home, but i think i'm going to make an exception for this one. And I can even go to watch it alone.
I want to have SJK & SJS's handsomness for me and myself only....
Apart from that, i look forward the japanese occupation era theme. It's always painfully interesting to learn about troubled history time. This happenned only 80 years ago...

What an impactful trailer! Also, its great that the focus is on the people rather than just the stars. Korean historical films are really good in this regard. In my country, its all about the hero. Anyhow, Japanese deeds never fail to horrify me.

heol, this is gonna be a great movie

I really hope it comes to Seattle area since I am so sick and tired of the same hollywood garbage and filth that they call movies and would love to see this one instead.

Even though it's Song Joong ki and So ji sub i have phobia for this kind of movies.....Otteokeeee ??

wow this sure looks intense

I'm excited for its release!

So Ji Sub looked fantastic, as always! I love ❤️ his individual style! Always be yourself and no one else just to please them!

I'm so scared to watch this... I don't think I can handle the violence, and I'll probably end up crying >.<