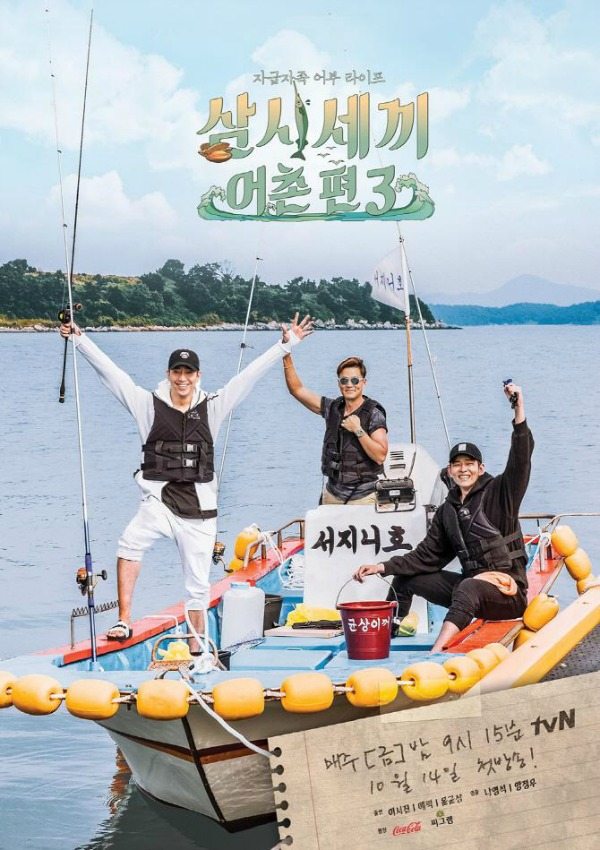 Yay! A fourth season of Three Meals a Day: Fishing Village is in the works, and Lee Seo-jin (Marriage Contract) has already confirmed that he will be returning to work with Na PD. I watch and enjoy all of Na PD’s shows, including the currently airing New Journey to the West 4 and Useless, Mysterious Trivia Dictionary, but I’m happy to see him going back to one of his tvN flagship shows, in what will be the seventh installment in the Three Meals a Day series.

There’s no broadcast schedule yet, and Na PD’s busy with his two shows that are airing now, but I’m just glad to hear that Lee Seo-jin will be reuniting with Na PD, and that Eric (Oh Hae-young Again) and Yoon Kyun-sang (Rebel: Thief Who Stole the People) are considering offers to return. They had a pretty great dynamic in the last season, and I just hope Yoon Kyun-sang brings his two cats with him again if he does confirm. Lee Seo-jin’s reluctantly growing affection for the various animals in each season are always a highlight.

I crack up whenever I think about Lee Seo-jin’s longstanding “purely business” relationship with Na PD, because what started out as a guest stint on 1 Night 2 Days five years ago has spawned into multiple successful variety franchises, and an image transformation for the actor. Who knew that grump was so funny, and that the “art school hyung” would end up winning the variety Daesang at tvN’s award ceremony?

It sounds like they’re planning to start filming in July or August for Season 4 of Three Meals a Day: Fishing Village, which means we can probably expect the show to air in the fall. Will Na PD ever get some rest?

Please, Kyunsang's cats, confirm! I need you in my life right now! Lol. Seojinnie is okay with whatever Na PD makes him do. Art School Hyung has come a long way.

Where can I watch the season that just ended ?

I started watching it on kshowonline, I don't know if they have all episodes. Hope it helps

I watched it on tvN Asia which aired in several southeast asia's country
And the Gochang Village season, I streamed it on ikshow

This reminds me I have to catch up Season 3 (couldn't find subtitles and then well as usual too many dramas and other stuffs, poor memory doesn't help). It would be great if all 3 return for another season. I enjoy watching this show, it's like healing time with a lot of foods !

Thanks. I wanted to watch some of Na PD shows too.

I would like more Koong and Mongie, please! Hope they all return, their dynamics were just great.

I hope this time Tomi will be able to join too. I can't get enough of her after her short appearance in the last episode. I need moaar Kyungpapa and his 3 kids !

Whoaa.. I just thought about Yoon Kyun Sang's comeback a few days ago. I mean, his fellow Rebel cast has got their next project already, so I was being impatient to see him again. Then I remember that Seojinnie said in the last episode of 3MAD season 3 that he will be anticipating the next season of 3MAD in summer. Aand~ here comes the news ! Thanks dramagods !

I hope the show gets the three of them together again tho.. but if they decide to change the cast, I think I must trying hard to be more patient XD

Yay! Can't wait! I hope Eric and Kyun-sang will return!

OMG - if they can wait until this fall, they should invite LSG!!!!

As long as Eric comes back!!! I still use some of the tips he shared on the show in my own cooking. Buffering-ric, please confirm!

I guess we'll have to be patient to wait for his reply... He's buffering after all XD

E-chef gotta come back to feed the crew. They ate well last season. I use some of the cooking tips he shared too. The scoring the yams before cooking it makes removal of the skin a breeze! :)

Seeing you here reminds me that I'm not done with Three Meals a Day recaps. ?

Yes! Let's hope Eric and Kyun-sang confirm too! The sloooow chef and his best giant baby intern! I loved that show so much!

Omgg so so excited for this!

Seriously Na PD's shows are always so so enjoyable (I think I've watched all of his shows).. Also quite surprised that I'm loving Dictionary of Useless knowledge quite abit haha!

Start filming on July? Doesn't Eric marry around that time? Will be super fast the groom back from the honeymoon XD. I do hope the three confirm. I miss Kong and Mong, E-chef, Kyungtern and captain Seo Jinie. And I hope there will be guests so those will join Na PD to enjoy Eric's super delicious food ?

plot twist: the show IS his honeymoon. hahah :p

Highly doubt it. Everyone knows how lowkey Eric in real life.

I would so love it if Eric and Kyun Sang returned as well! Their trio worked so well with Eric as cooking mama and Kyun Sang the adorably squishy hoobae ?

Anyone here knows where to watch "New Journey to the West 4" with English subtitles?? I so want to watch it, I love the current group so much!!!

not out yet.. you gotta wait a few weeks before they start rolling it in

Fansub will released episode 1 in next few days, while VIU has just obtained broadcasting rights and subs will release early next week.

Please confirm. I would love to see all three (plus the cats) grace my screen once more.

yeah!!! Eric was some kind of Master Chef!!
These three had excellent chemistry.

Eric is the husband goal. Handsome, caring, considerate and of course the master of cooking.

I'd love to see how the Kyungtern become permanent staff lol. And please bring Kongie and Mongie again. I miss the boys so badly.

Ah, it was a blast recapping this.

But New Journey to the West right now is nuts (guffawing everytime I remember Song Mino's holy finger and Na PD's "incident" in Ep 2.) How does Na PD pick the right people for all his shows? Because they're so simple but the casts elevate their quality by 100% more.

Lol. Songkarak was so hilarious! I totally died laughing so many times. Na PD on his knees was epic. "I wanted to play a joke. I'm sorry." I can't wait until it gets subs so more people can watch it.

"The viewers won't accept this!"

Oh God! I so want to watch it now!!!! *still patiently waits for subs*

But they'd die without Eric there to feed them.

HAHAHAHHHAHA True, he DID do all the cooking last season XD Lee Seo Jin could probably cook, although, reluctantly ROFL

Please eric return i need more of your wonderful food recipes and also of course yoon kyung sang and his cats??

OMG YAS. Please being the full cast back. I loved grumpy Seo Gene's gruff love for everyone there - be it E-chef, our curious maknae, or the adorable kitties (one of which he even had a loveline with), and of course his favourite of them all - Na PD. SIGN ME UP FOR MORE!

I kinda want to see Taecyeon again. Or maybe he can make an appearance with Eddie.

I think Taec is going to enlist soon if I am not wrong.

Not sure Eric will be able to join as he will be getting married in July??

He may want to spend time with his bride and cooking for her instead lol.

Whatever village Na PD is making, count me in!

Eric is getting married on 1st July. He'll be going on a short honeymoon, that was already stated when the marriage announcement first came. So I hope he would be able to join 3 meals a day in the end of July or August ? but I won't be surprised if he refuses with getting married and preparing for Shinhwa's 20th anniversary activities next year he would be super busy.

I hope Eric says yes... And, he should bring along the Shinhwa members as the guest. Those ahjussi are so hilarious and never fail to deliver lol.

Yes, my soul needs more of this trio cooking and fishing together.

this is great news that i hope comes thru! we NEED the 3 guys together again cooking and fishing! i can't believe i watched the episodes of this and thoroughly enjoyed every minute. course i love eric and i love those cats of kyunsang!

I really do love & enjoy the triple combo of TVN, Na PD, & Lee Seojin. Looking forward to watching the next installment of this series.

i hope eric and kyunsang will commit to appear again!!!

It is confirmed that the cast members will be similar to the last season. Personally, I am disappointed that there is no change in the cast members. I do not think the team dynamic was fantastic in season 3. I am still reminiscing the season with Lee Seojin, OK taecyeon and Kim Kwang-kyu. The team dynamic was amazing and almost every episode was laughter-filled... i can't say the same for the new cast...

I CAN'T WAIT! I'M SO LOOKING FORWARD TO SEEING Seo Jin, Eric and Kyun sang and his entertaining feline friends. 👍😊