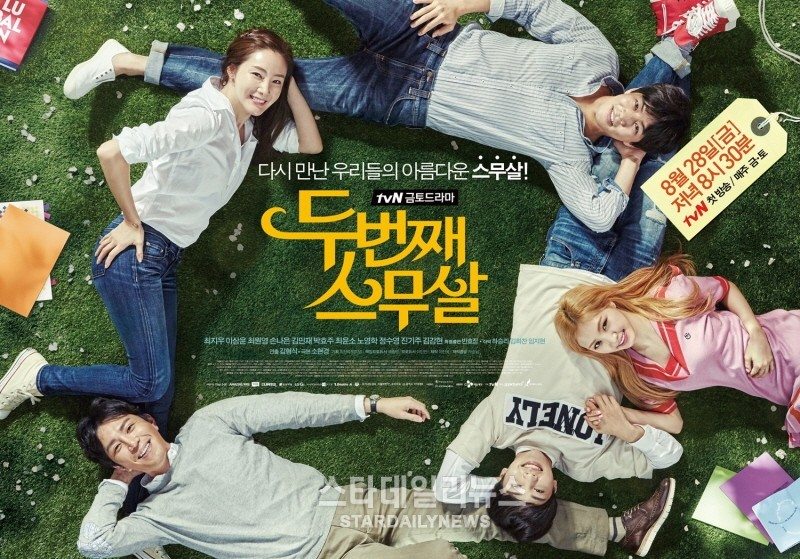 Director Kim Hyung-shik, who helmed Twenty Again, is returning to dramaland with a new project for tvN, tentatively titled About Time. The station is still in negotiations over when to air the upcoming fantasy romance, but there’s a good chance we could see it on the airwaves as early as this fall.

There hasn’t been much revealed on the plot, and it sounds like the producers themselves are still working out the details of the story, but the general narrative will revolve around the concept of moments of true love, and the magical quality about them, though in this case, the “magic” might be more literal than figurative. Our heroine will have the unfortunate ability of seeing the “life clocks” of everyone around her, including herself, and the hero will somehow be able to stop her “time” without lifting a finger. This story will follow time that is stopped, extended, and even erased through the love they have for each other. When I first saw the title About Time and its time-bendy premise, I thought this would be a remake of the Richard Curtis film with the same name, which was a surprise hit in Korea, but it doesn’t sound like that’s the case.

I really enjoyed Twenty Again, so I’m happy that Kim Hyung-shik is returning with a new show, but I do think the quality of his dramas fluctuate pretty drastically depending on the writer: Aside from Twenty Again, one of his earliest projects was co-directing 2005’s Lovers in Prague, which is a sentimental favorite of mine, but he also directed I Am Legend (2010) and Secret Door (2014), which were… not so great. So, I’m hoping that About Time’s unnamed writer, who is a rookie and will make his or her debut with this show, will write a strong, compelling romance that Kim Hyung-shik can translate to the screen.

The producers haven’t started the casting process yet since they’re still in the planning stages and working out the scheduling kinks, but if they do intend to air the show in September after Bride of the Water God 2017 as some reports speculate, they’d better get a move on because time’s a-ticking.

Via My Daily, Ilgan Sports

The concept with the time clocks are so cool. I hope this new writer does great and brings another a story we will always remember (in a good way).

I loved Twenty Again and this one sounds unique and interesting. Hope they'll have a good cast as well. Looking forward. ?

This sounds really interesting! I hope the writing will come through.

Sounds like an interesting story! I love it when something new and refreshing gets brought to the table, as much as I love classic tropes. I'm curious to see who they cast as the leads!

I really want to watch this drama after reading this! This is a new and unique concept that I really hope the writing and story line makes it even better.

Life Clocks suddenly reminded me of Death Note lmao. So until full details were revealed, the image inside my head is Death Note except that it's a lot pink and fluffy instead of black.

I thought the exact same thing!

Being able to see everyone's "life clock" sucks, though. The hero being able to stop the heroine's "time" reminds me of those literal opposites attract romances like Master's Sun, where she could see ghosts and was terrified of them, but he couldn't see 'em and was somehow a ghost repellent and whenever she was with him, she wasn't bothered by ghosts anymore. Anyways! This has potential to be super cool, interesting, romantic, and sweet. Can't wait to find out more about this one.

I was also reminded of Master's Sun!! ?? It also kinda reminds me of Goblin, hmm...

Aww, this drama sounds so cute. I wonder how young or old the characters are going to be. A love that can literally stop time, it's so adorable I could die.

9 Playstore, Okay Or Not Okay

Fantasy drama helmed by Twenty again Director? COUNT ME IN!

Interesting! The premise of 'life clocks' reminds me of that Nickelback (I know) music video for their song - Savin' Me. The video had a guy whose life was saved by a stranger and afterwards he could see literal life timers over the head of everyone.

I loved twenty again, and the concept of clocks and time sounds so cool. I hope it works out well

I'm sorry but what are "life clocks"? What that means? That means she know when others die?

omg twenty again was SOOO good!! lol omg im tempted to go rewatch the drama at this minute. it was just sooo cute and heartfelt and interesting and good! lol

Oooh.....interesting concept. Looking forward to it

This sounds good and I love Twenty Again so much! Reunite with Lee Sang Yoon pls so I can get more of his dimples (and I'm going to keep saying this in every possible casting news until I hear about her next project, pls cast Kim So Eun for lead girl!) ?????

Ooh, sounds right up my alley! Will keep an eye out for this one.

There seems to be an ongoing theme for tvN shows, they're always going for stories that involve or hinge on time: Signal, Goblin, Tomorrow With You, Chicago Typewriter, Circle... Not that I'm complaining, I've seen three out of those five.

While the story can potentially go in a couple of directions, the whole life clocks premise sounds interesting.

I'll never understand the love for Twenty Again in DB. It's was plain boring and repetitive to a point where I fell asleep watching some episodes - and that itself is quite rare for me.

Anyway, this one sounds good but a bit complicated so I'm reluctant to believe in a rookie writer's ability to not mess it up. But that doesn't mean I hope he/she proves me wrong.