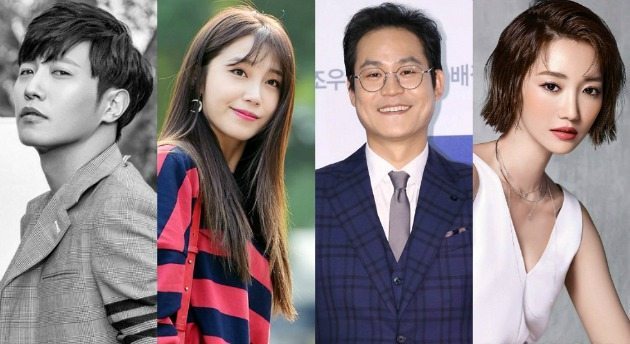 JTBC has announced the newest drama in its pre-production pipeline, titled Untouchable, and has just confirmed that Jin Gu (Night Light, Descended From the Sun) has signed on to headline. The production is also in talks with Jung Eun-ji (Sassy Go Go), Kim Sung-kyun (Answer Me 1988), and Go Jun-hee (She Was Pretty), who are all reportedly “positively considering” the drama.

From the description, Untouchable sounds like it’ll be in the thriller-melodrama mold, being set in a fictional city where the Jang family has held power for three generations. The drama deals with the power battle that unfolds among them, as well as a hidden secret that our hero aims to uncover. Jin Gu is set to play Jang Joon-seo, the second son of Jang clan patriarch who is described as a determined man who doesn’t let himself be pushed around by those in power. After he loses the woman he loves, he resolves to get to the bottom of the circumstances that caused it. No descriptions have been provided for the other characters.

This drama comes from the PD Jo Nam-gook, director of The Chaser and Empire of Gold, both of which dealt with power and corruption and a struggle to assert dominance among the elite. It sounds likely that Untouchable will follow in their footsteps by being suspenseful and dramatic, and populated with flawed and complex characters. Writing is Choi Jin-won of Big Man and Masked Prosecutor, which I’m a little less excited about, but maybe this director is just the person to infuse the storyline with a strong dose of tension and conflict.

JTBC will air Untouchable following Lee Yeon-hee and Jung Yong-hwa’s travel drama The Package, which was announced ages ago and has wrapped filming for a while. The Package will premiere in October, which puts Untouchable’s run at the very end of the year.

I like the casting, and the PD, but that writer does not inspire any confidence.

i was just wondering when go jun hee and eunji would be in a drama and lo and behold they're both casted in the same show. I'm not so sure about the plot but the cast is interesting enough to take a look.

But why the two random names? Do they have any connection

This is like another chaebol drama, if it is done right, it will be good one! Jin Gu's character sound more and less like his character in Night Light, so hopefully the writing is better this time. If this drama managed to bring some vibe from Empire of Gold, it will be nice to see.

Hope the rest will confirm too.

I agree. If it's to have an Empire of Gold vibe though, the dialogue and any corresponding moves/countermoves have to be on point. Remember the tea-drinking sessions in Empire of Gold? They had so much going on! ...... On the other hand, if it's going the Night Light route, they may have Jin Gu doing prolonged staring sessions out of windows. Uh oh.

Of course, it's too early to tell what they're going to do so let's just hope things turn out well.

Okay. When I read the title i thought it was going to be an adaptation of the webtoon by the same name . I guess I got too excited.

For a moment I thought it was Untouchable the webtoon.

Excited for Eunji back to dramaland finally! ^^ though not similar of the PD/writer works, hopefully it's a different kind of role for her :)

Actress Eun Ji is back!!!!! Well, that's the only thing that excites me..

I wonder if she is the main female lead or if it's Go Joon Hee?

I wish this drama had a better writer.

well as much as i love Eun ji, I don't like to see her flirting with Jin gu. I'm happy if she's casted just don't make her a loveline with him. I just can't imagine.

I doubt that there will be a love line for the protagonist. Jin Goo`s character lost the woman he loves and he is investigating her case. It is not the time for a romance.

That's what I'm here to say!! Like I can't even shout! I miss her and I can't wait to see her in a thriller melo. Maybe shell play a mature character this time, she's so good at both( see Answer Me 1997).

BM & MP are boring as hell. Should be deleted from the main leads CV. But since this drama is on jtbc, it'll do well in plot etc etc LOL. Goodluck

That writer though.... I look forward to Jung Eunji in a new acting project and hope she does well but that writer....

The role seems highly likely to be a departure for Eun Ji from her usual, it would be interesting to see her tackle a heavy dramatic role. But the writer already makes me want to run for the hills :/

EUN JI-SSI? ARE YOU COMING BACK TO MY SCREEN? Please...

Wait a minute. Jung Yong-hwa? How did I miss this?
By the way, does anyone know travel dramas set in Korea? I want to vicariously travel through its the regions and coasts hehe (maybe I should ask this in OT).

Oh and to make a comment that's remotely relevant to this thread, I like the actors but am not sure about the plot.

Most scenes were filming in France.

I know, that's why I asked about other dramas set in Korea.

1N2D travels a lot round Korea from what I know. That's variety though lol

I love you, Jin Gu, but love cannot make this plot sound like something I want to watch.

I miss Jung Eun Ji so this is happy news. :D

Ohhh I like this possible cast lineup. Not so sure about the plot but this will definitely be on my radar.

This sounds interesting. I've been wanting to see Jung Eun-Ji in another drama, so I hope she signs on.

Haha am I bad for being excited that this drama will be aired after The Package. Yes, for Junghwa's drama! And I'm only excited for this drama because of both the female leads.

Can't wait to see Eunji on my screen again every week! Looking forward to her slaying like how Apink has slayed the charts this comeback ^^

Wow, this is a good cast if everyone signs on.