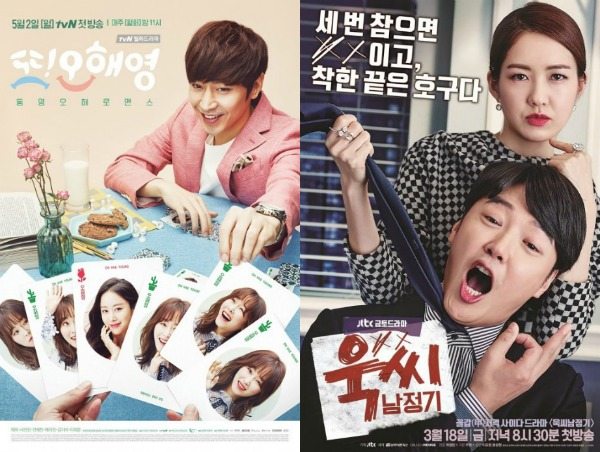 There’s a new drama in the works over at tvN, tentatively titled Revolutionary Love. It’s the newest project from PD Song Hyun-wook, who directed Oh Hae-young Again and Introverted Boss, and writer Joo Hyun, whose previous credits include Ms. Temper and Nam Jung-ki. Song is certainly keeping himself busy, since he’s still in the middle of directing web drama Meloholic, with DBSK’s Yunho and Kyung Su-jin.

In Revolutionary Love, the plot will center around the friendships and love lives of three youths, one a third-generation chaebol heir hidden away in the suburbs, the second a perpetual part-timer, and the last an elite character whose success is purely due to his capabilities. It sounds like a cute story, with a dash of whimsy in the secret third-generation chaebol character, which vaguely reminds me of Shopping King Louis. The hidden heir also looks to be the main lead, since the title (revolutionary = byunhyuk) seems to be a play on his name (Byun Hyuk).

Oh Hae-young Again was a surprise hit, but the director’s follow-up project, Introverted Boss, didn’t quite manage to live up to the high expectations people had, so perhaps there are some reservations about his next project. However, I think the main issue with Introverted Boss was more about the writing and the portrayal of the heroine, so I hope that with a different writer, this new show won’t run into the same problems. And I do really like Song Hyun-wook’s distinctive directing style, which makes all of his dramas that I’ve watched (the two mentioned previously plus Marriage Not Dating) look like they all exist in the same universe.

It sounds like Revolutionary Love will premiere later this year, although the station is currently in talks on when to air it.

This is exciting!! :D

Can't wait to read about casting news next time! I wonder who'll be the leads.

Continuing to pray for kang haneul and kim seulgi... Maybe with key or doojoon!!! They're youthful enough right?!? Please Haneul and Seulgi deserve to be mains by now!!

Kang Ha Neul will be enlisted this September ? But he will leave us with his last drama Bad Guys 2 and his upcoming movies Midnight Runner & Recall The Night so it's better than nothing I'm also quite sure he wants to follow Yoo Ah In' step not to do romcom at least before he becomes 30.?

By the way yesssssss for Kim Seul Gi. With anyone. I don't mind.

I can't believe Kang Ha Neul is also enlisting this year, 2017 has been a horrible year full of goodbyes :(

Yoon Shi Yoon please! I am so not ready to part from him in few weeks when Best Hit wraps up. I know he has his Dong Gu persona in 1N2D but it doesn't beat his magnetic charm in dramas.

Though I'd love for Kang Ha Neul to be casted, but yeah, he's enlisted. I'm now even worried if he would join Bad Guy 2 or not.

I actually have Yang Se Jong in my mind though. He'd done medical drama, saeguk and sci-fi thriller. So, I'd like to see him in romance drama for his next project.

I don't know, I have a feeling he probably will want to avoid some romance drama for now. He even declined to play second lead in BOTWG.
I want to see him in some romance role as well, but I also don't mind to see him going to chungmuro after this.

He might decline BOTWG due to his role in Duel, it's kinda hard to focus two dramas at the same time, I guess?
But yeah, if he goes to big screen, I'd be gladly to support him always. ❤️

If I'm not mistaken he was offered BOTWG first, but at the same he auditioned for his role in Duel. I'm glad he got picked for Duel. Maybe , if he wasn't picked for Duel he would have choose BOTWG. But I'm just glad how things turned out for him.

I think I read somewhere that his agency has confirmed that he will def join Bad Guys 2 and filming would wrap up before enlistment.

@boomboompow thanks for the info! I havent watched Bad Guy yet, but I was planning to do marathon on that drama before Bad Guy 2 comes out. I'm glad that Kang Ha Neul is still in! ?

I still have to watch OHYA and IB (too many shows on my watchlist D:), but would love to give this show a shot! Seems interesting and I love me a good old story about friendships.

Yes, please please watch OHYA! I also held back on watching it and I regretted not watching it earlier.

I tried watching Ms Temper and Nam Jung-ki but I found Nam Jung-ki's character incredibly annoying even while I loved Ms Ok's cool, no nonsense attitude so I couldn't continue it. I loved the directing of Oh Hae-young and Marriage Not Dating is definitely one of my favourite dramas ever so I look forward to this.

What I loved about Ms. Temper and Nam Jun Ki was that he was realistic and true to his character. The drama already told us that he was a non-confrontational person who always took the easy way out, the path of least resistance. And the drama didn't wimp out on showing us the ugliness that comes with having a personality like that, the drama wasn't shy in showing him grovel, beg, be reduced to basically a dog, both in a humorous and heart-wrenching manner, cause we know that happens.

The drama was a journey of him developing the self-confidence, self-esteem needed to stand up for himself, and to unapologetically chase his dreams and the journey was so rewarding.

I haven't even touched Ok Da Jung's journey herself which was just as awesome. And then there's Nam Bon Gi, the married assistant, the boss...really the drama is just full of rewarding character journeys which is why I love it so much!

True! This drama is among my top fav last year. At first I was worried we would get a cliche romcom - a tough woman who falls in love a naive guy. But I'm grateful it never went there. In fact, all characters were developed well. I don't view this drama as a romcom, but more as a slice of life workplace drama with some humours.

this sounds interesting & probably something i will like! definitely need a new romcom after Fight My Way ends. more details & casting info please! till then~

One that's is a chaebol heir, one that's a perpetual part-timer, one that's extremely talented in their field... too typical ?. Can kdrama world be more creative please?!

This sounds fun. I'm a bit weary of chaebols, but if there's an entertaining secret to it, it could be above average.

Revolutionary Love with a love triangle, how is it revolutionary ? ?
Besides that, I liked Oh Hae Young Again and Shopping King Louis so I might check this drama. Thanks for the news.

I really enjoyed Ms Temper and Oh Hae Young plus this is on TVN so something to look forward to! Really liking the new youth stories, it's a good break from all the serial and law dramas that they've been having lately.

Oh Hae-young Again and Ms. Temper and Nam Jung-ki are two of my favorite shows so I can't wait

Eh I don't know. Youth dramas don't really do it for me.

12 gadis is camping in the cells village (again)

This project has solid writer-director team, so I'm looking forward to this. Hopefully the cast wouldn't dissappoint.

Ms Temper & NJK is my all time fav drama! Among the the three leads can you cast Chan Sung?? I would love to see Yeon Woo Jin again, but this guy will be too busy this year lol.

The part timer's role seems will be the female lead ? But will it be a love triangle drama? hmmm.

Wouldn't it be great if it was the part-timer who was a guy and the other two were women or if all three were the same gender? Now that would be a revolutionary love.

It would be great, definitely!

He is also good in Seven Days Queen. I'm lookinh forward to see more of him!

Please cast choi wooshik as a lead male. I want to see more of him

This guy deserves to be main lead! So yes for this!

I was not too excited about Nam Jung Ki, but the drama was farrrr more enjoyable than Introverted Boss

I loved ms temper and Nam Jung ki and was a fan of the directing in oh hae young again so I'm definitely looking forward to this!

I feel like its too early for me to get excited. I'll wait for more character descriptions and of course casting.