Storming the cult gates for OCN’s Rescue Me 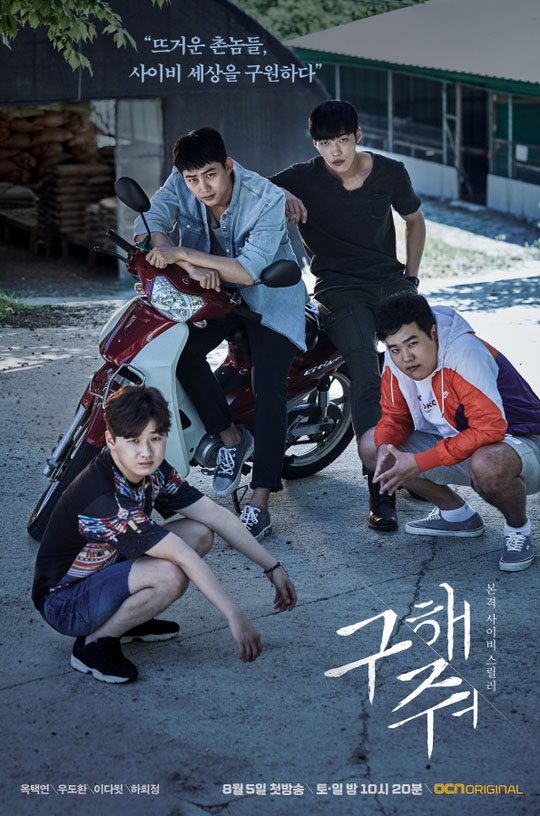 We get a tinge of darkness, mystery, and creepiness in these new posters for OCN’s new thriller Rescue Me—although not nearly as creepy as the last batch of teasers, which are admittedly hard to outdo on the creep factor. But this drama has a very compelling angle in its cult storyline, as it tells of a young woman who finds herself trapped in a religious cult and begging for rescue, and the group of young men who happen to hear her cry for help and get involved.

Those young men will be led by Taecyeon (Bring It On, Ghost), pictured in the above poster leaning on his motorcycle, while his buddies will be played by (going clockwise from Taec) Woo Do-hwan (The Man Living in Our House), Ha Hwe-jung, and Lee David (Bring It On, Ghost). The copy on their poster reads, “Hot-blooded country boys, saving the cult world.”

The second poster features the central characters on the cult side, headed by silver-haired Jo Sung-ha as the charismatic leader. (The hair strikes me as a little odd in that poster, or maybe it’s the Muppet eyebrows, but I’m appeased by the teaser clips we’ve seen so far, in which he looks more mysterious and less cheesy.) He’s flanked by his devoted lackeys, with Jo Jae-yoon (Defendant) skulking to his right and Park Ji-young (The Liar and His Lover) looking faithful and proud on his left. Their poster tells us, from our leader’s perspective, “I will make sure you are saved.” 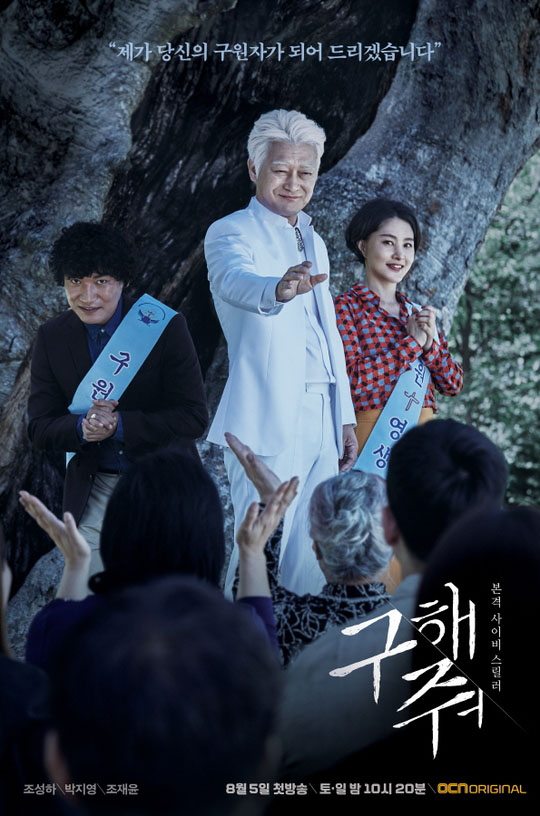 Below that we have the victims of the cult, with Seo Ye-ji (Hwarang) standing apart from her family, who get sucked into its clutches while she remains wary (though no less ensnared). Yoon Yoo-sun (Shopping King Louis) plays her feeble mother, Jang Hae-kyun (Ruler–Master of the Mask) plays the father who failed in business, and Jang Yoo-sang (The Magician) plays her twin brother. I can see why they’d cling to the cult as their hope for improving their lives even just a tiny bit, and why their daughter feels a sense of responsibility to care for them. Seo Ye-ji is the voice of their poster, which reads, “It is hell here… Rescue my family.”

Below that, we have a couple more teasers (bearing the same taglines as above), one that features the young band of rescuers with Seo Ye-ji, and the other that pictures the full cast in front of the cult compound, with leader Jo Sung-ha’s hand resting unsettlingly on Seo Yi-ji’s thigh. Gack.

I expect Rescue Me to be a bit dark and disturbing, but because the core conflict is so primal and urgent (save these people from hell! And not in a religious sense), I’m hoping for pounding thrills and a driving sense of immediacy and danger. I like that the four young men are described as country bumpkins, because that gives them a feeling of being simple folks who may have crude methods, which gives them an underdog vibe. And Taecyeon as a hot-blooded bumpkin with a sense of honor? I didn’t buy him for a second as a brainiac model student in Bring It On, Ghost, but THIS I can go for.

Rescue Me will be a Saturday-Sunday show on OCN premiering on August 5. 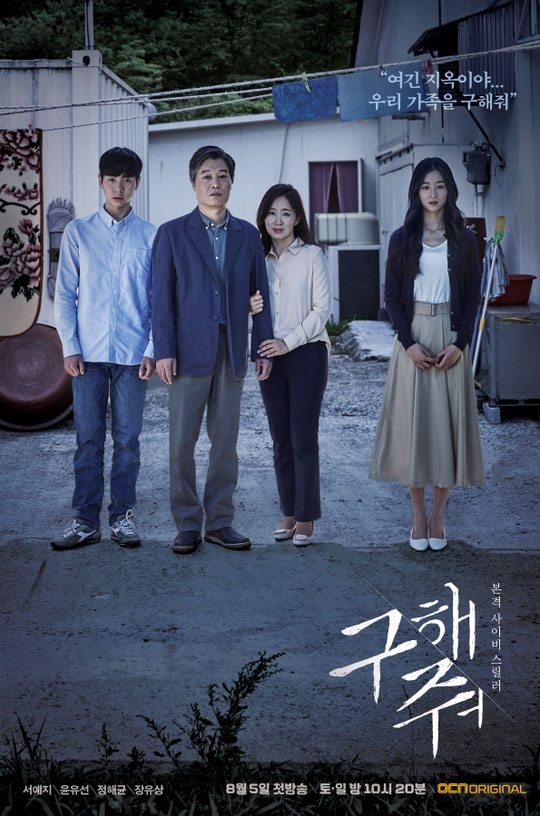 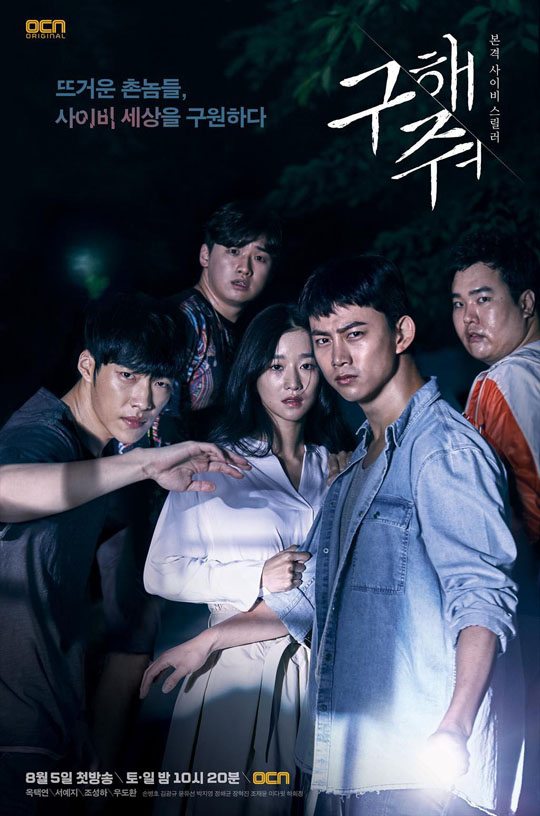 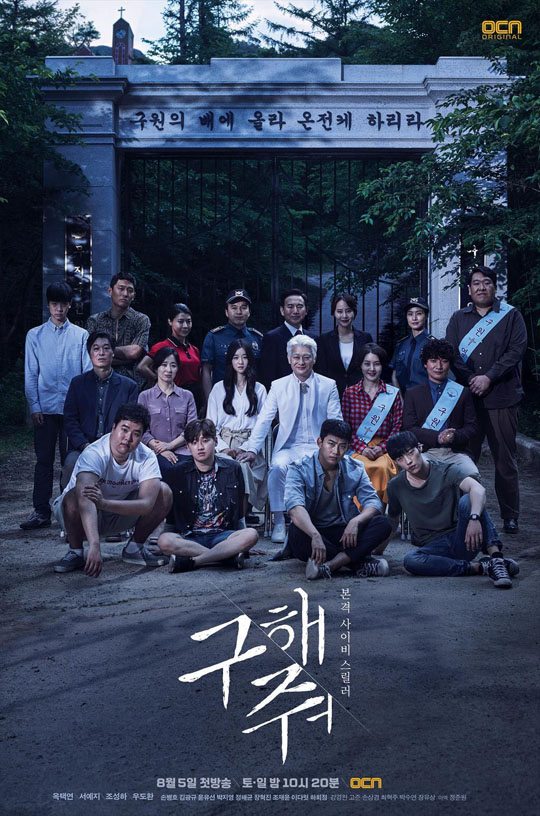 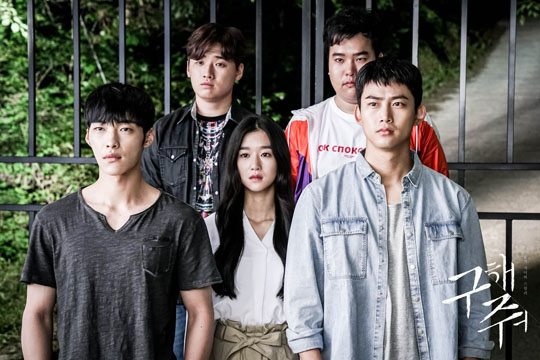 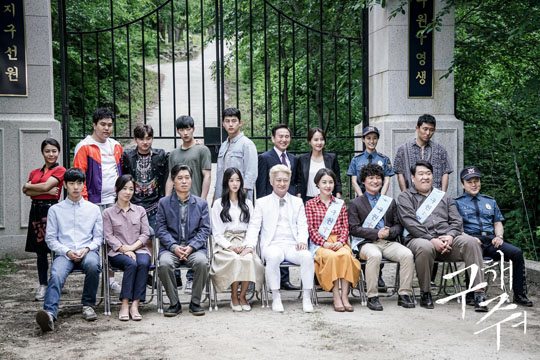 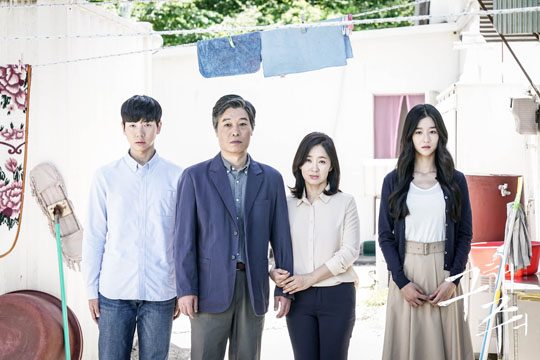 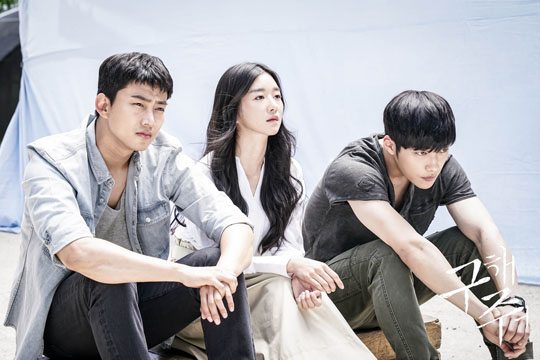 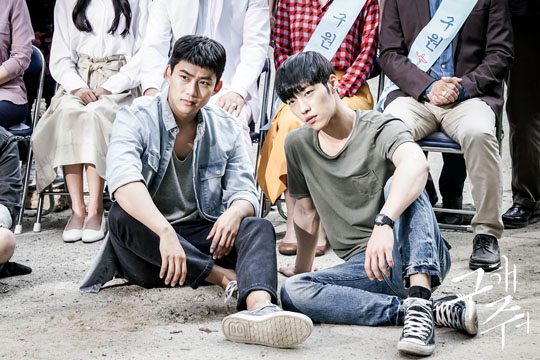 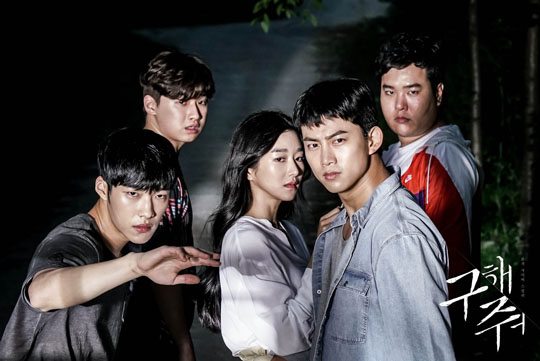 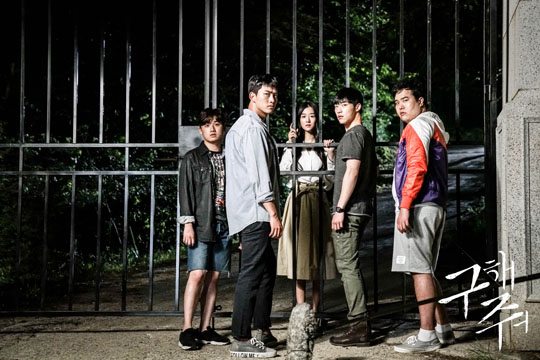 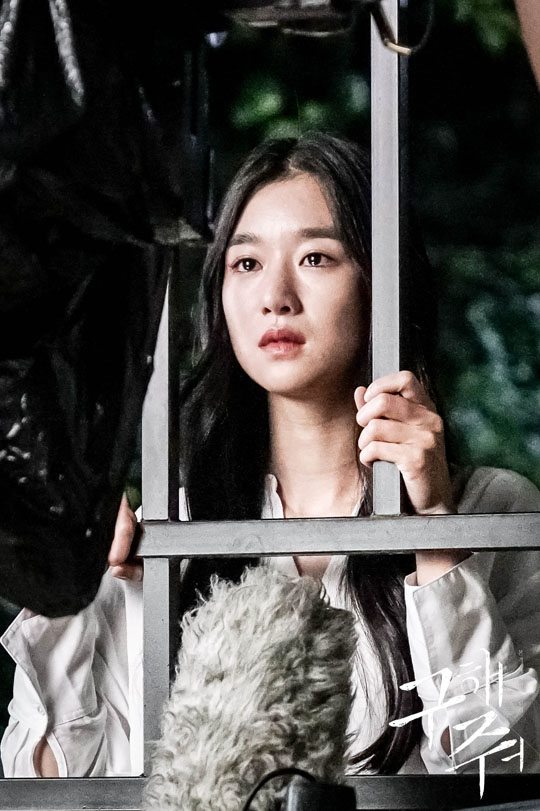 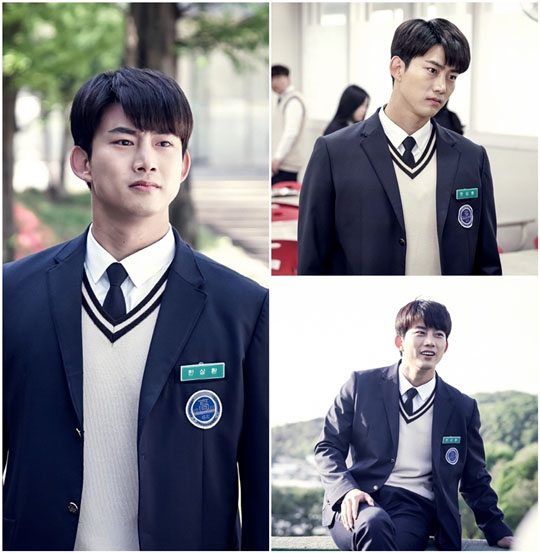 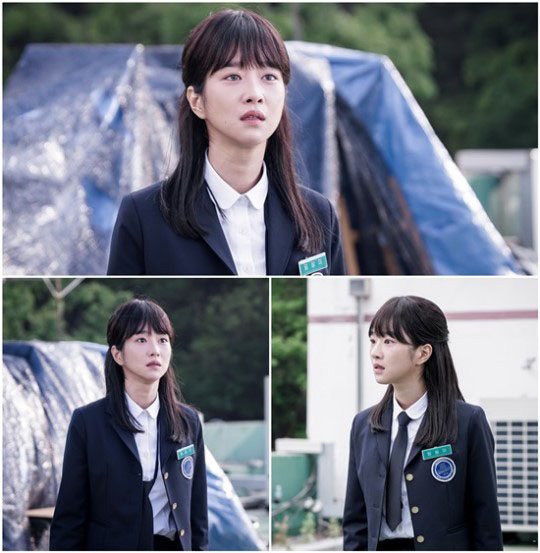 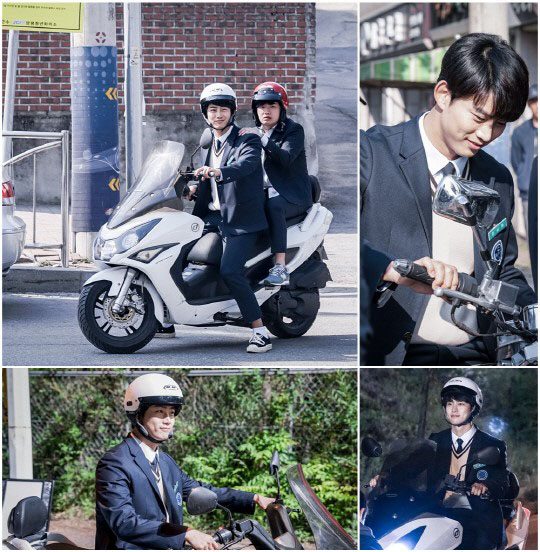 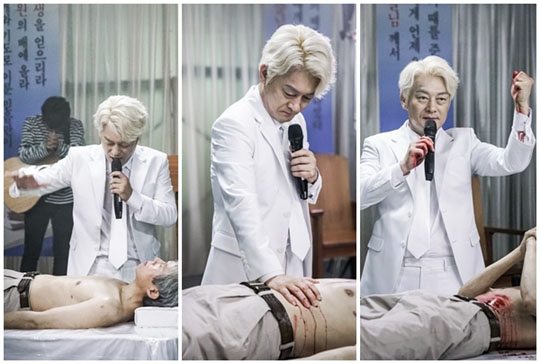 Ooooh looks super compelling. Hopefully it can lived up to its premises. Gonna put this on my watch list.

I had to do a double take because at a quick glance the guy in black in the first pic looked like Ryu Jun Yeol.

Is it silly if I say that I might watch this drama because of the guy in the black shirt haha?

I thought it was Kang Ha Neul!
Hello there, new-guy-on-the-block!!

I can't describe how excited I am for this drama. I always look forward to OCN's thriller drama as it always gives me different kind of thrillers and feels. I hope this drama will be great!

no no no are they going to show the "operating with a hand" nope. I want a warning with things like that.

First time I hear about this drama. Maybe because none of the lead actor intrigue me. The premise seems interesting but I'll wait for the premiere if it is good or not.

I am super ready for this.

I love a good cult storyline, they're underrepresented! Chances are I will enjoy this at least a little, even if it's terrible. As much as I enjoy Taecyeon as a person, I still haven't fully bought into him as a leading man, so let's see...

I am impressed that despite being busy saving the world these hot blooded country youths are still too well-mannered to say no for a group photo with the cult.

I love Taec and all but he has the same expression for nearly all the posters...still I'll check it out.

Everything looks and sounds great. THe only thing I'm worried about is Taecyeon. Hopefully, he's improved since the last time I've seen him.

I really like the premise and as an added bonus, the posters and teasers are upping the anticipating.

Based on the posters, it seems like the cult leader has a vested interest in Seo Ye-Ji. Note the proprietary hand in the group photo. Creeeepyyyy.

Also, I dont know why but I feel like there might be a love triangle between the heroine, the denim shirt fellow and the black shirt fellow, if the show has any time for romance that is.

The hand on Seo Yi-ji’s thigh is gross.

I hope that thisll be AHS style creepy and weird.

I thought Jo Sung-ha was an adorable ajusshi after he guested on 1N2D a long time ago but after these trailers I'm just scared??

Now this I like! Creepy cult drama is rare so I'm sure to check this out..
But, taeckyun? How to be excited with his acting?

Is Cult Leader Jo Sung-ha performing a psychic surgery? I saw one of those when I was a kid, and it terrified me for years.

What? That's a thing? That sounds terrifying. I can't believe you actually saw it.

I am dying for a good, bloody OCN show, but dang. I really do not care for Taecyeon's acting. As he'll be the lead, this could be a deal-breaker. :whispers: Please be good.

The images are unsettling. I wonder if the guys will try to infiltrate th cult.

This is looking better and better with every teaser and poster. The supporting cast is the biggest draw--Jo Sung ha, Jo Jae-yoon and Park ji young already have me terrified.
I like Taecyeon, while he usnt the best actor, he always looks like he gives his best. Looking forward to this one:)

The stills involving the cult leader looks so dark. But everything is so interesting. Please be good.

I see so many other actors faces in Woo Do Hwan aka guy in the black shirt. Quick glance he looked like Ji Chang Wook, then I saw Choi Jin Hyuk. Another picture I thought he was Kim Jung Hyun (of Rebel, Jealousy, and upcoming School 2017), then I saw some Kim Woo Bin, and also Ryu Jun Yeol. Aka I find him uniquely handsome and to really have presence in all the pictures.

The drama sounds so intriguing, creepy, mysterious, and just all around good that ties in well with the political upheaval SK just went through (former president puppet of a cult and it's leader?). I hope they do rescue Seo Ye-ji because she and her family (mostly her dad and brother) look like they sipped too much of the cult kool-aid. I hope this drama is as good as the following and hope they do not go the tragedy of Johannesburg route.

Aha, you see it too, right? I totally see Choi Jin-hyuk and Ryu Joon-yeol in him. He definitely stands out! Let's hope his acting will, too.

Anything with the word "cult" in it just makes me shudder. This cult is no different--it seems creepy and scary, but I'm definitely intrigued. Will be checking this one out! But not a night because I don't play like that.

I like the cast! Some random thoughts:
- I really like Seo Ye-ji's speaking voice, so I'd watch more of her just to hear her talk. In that one still where she's standing w/ the boys, it looks like she has shorter hair, so I kinda wish she did.
- I like Taecyeon enough, but why you wearin' a hs uniform, man?
- That Woo Do-hwan guy looks like a mix of Ryu Joon-yeol and Choi Jin-hyuk.