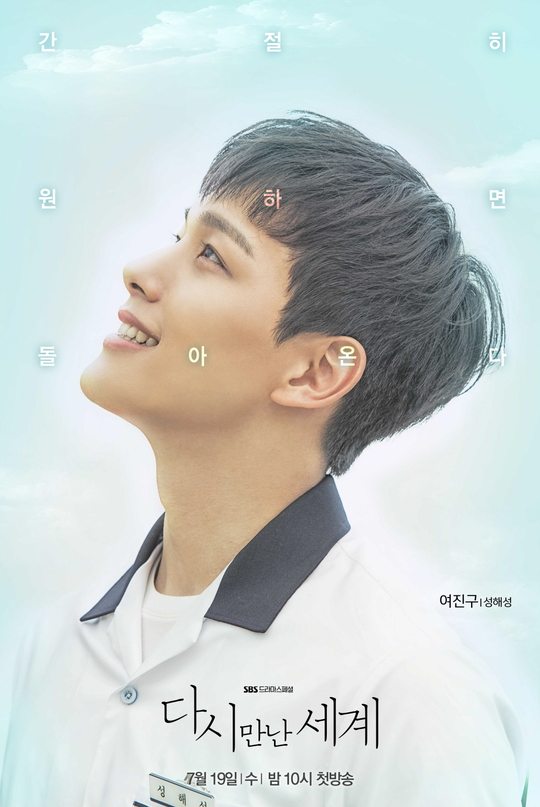 Oh no, I can just tell Yeo Jin-gu (Circle) is going to break my heart—AGAIN—in this. Posters and stills from the set of SBS’s upcoming fantasy romance Reunited Worlds have been recently released, and I’m really digging the dreamy, contemplative atmosphere of the individual posters for each of the main characters.

In Reunited Worlds, Yeo Jin-gu stars as a 19-year-old who comes back from the dead 12 years after a car accident that supposedly kills him. He’ll reunite with his childhood best friend and maybe sweetheart Lee Yeon-hee (Hwajeong), although she won’t be the teenager that he remembers, played by IOI’s Jung Chae-yeon (Drinking Solo). She’s now a kitchen assistant at the bottom of the pecking order, trying to fulfill her best friend’s dream of becoming a chef, although it doesn’t look like she has much talent in this field if she’s still an assistant after five years in the same restaurant. She does become the object of a one-sided crush from her boss though, a suave, kind chef-restaurateur played by Ahn Jae-hyun (Cinderella and the Four Knights).

The promo team for Reunited Worlds must know what its audience wants (or okay, maybe just what I want), because the batch of stills released all include Yeo Jin-gu’s character. In one, he’s having fun with Jung Chae-yeon’s character in happier, pre-accident days, and the next shows their reunion years later, symbolically on either side of railroad tracks, both looking shocked and dazed. My favorite by far, though, has to be the one with him and his younger sister and brother. Yeo Jin-gu playing a momma bear older brother who ties his sister’s braids for her? Sign me up.

SBS’s Reunited Worlds will follow Suspicious Partner, which ends tomorrow, in the Wednesday-Thursday slot on July 19. Ack, I can’t believe that we’re starting a whole new cycle of dramas already; I just managed to get rid of my panda eyes!! 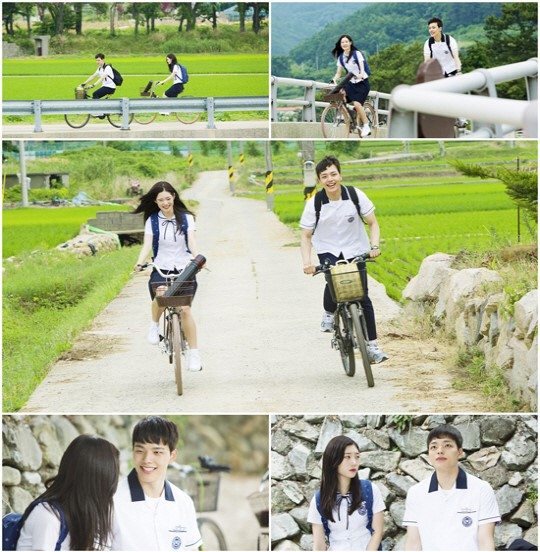 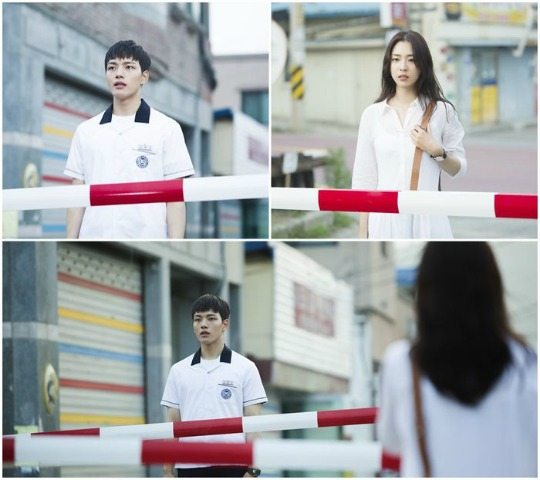 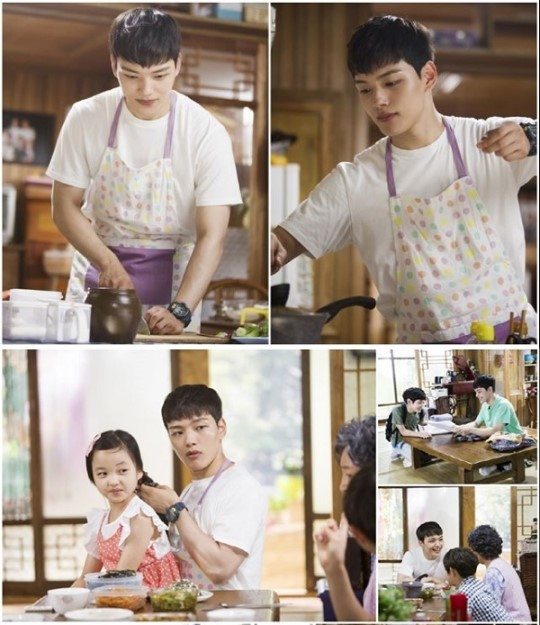 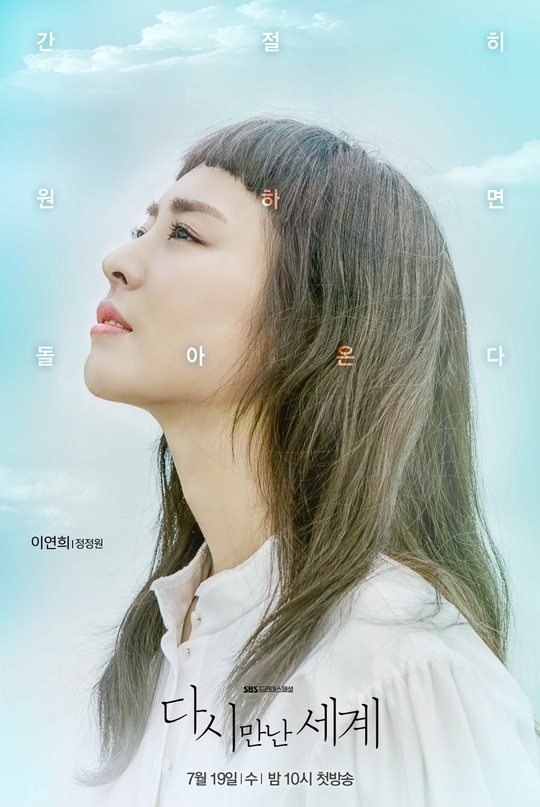 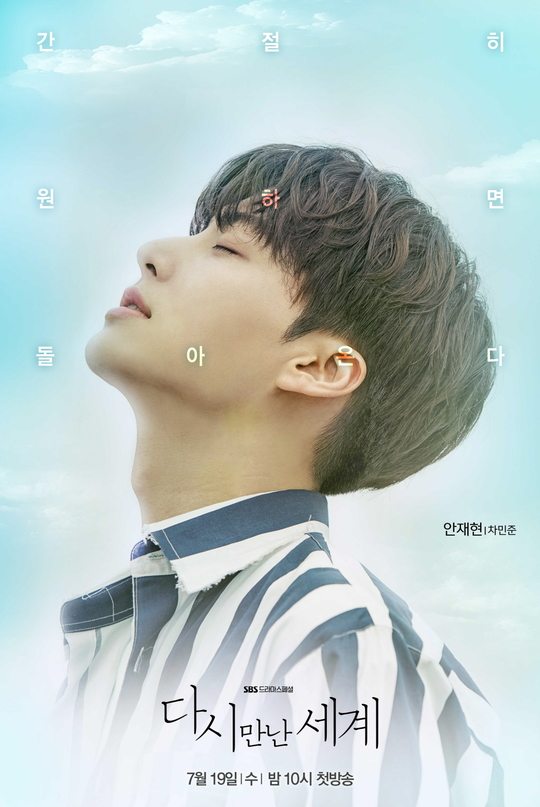 What happened to Lee Yeon-hee's hair?

Okay posted that too fast!

This drama is looking good so far, I just started marathoning Circle and loving it, will finish it before this starts and I'm excited to get Yeo Jin-gu back on my screen so soon!

Her hair? What the hell is going on with her eyebrows?

Ahh, can't wait!! And I guess the first episode will be the backstory episode when they were in highschool.

When will the trend of having bangs dieeeee? I want to love you, so much, Show, you've got so many things going for you, so if you'd please just.

Bangs look good on Kim So-hyun. Lee Yeon-hee, not so much.

Normal bangs are ok, too short bangs are a mistake. On anybody.

too short bangs looked good on Choo Sarang though. :-p

That kind of bangs is only good with anime characters. Lol

I'm really looking forward to this.

Wow, those are some gorgeous posters! Yeo Jin-gu looks so radiant.

The show certainly knows its audience. Showing Yeo Jin Gu's side profile is a great strategy to attract viewers! :D I am in!

They have access to my memory chip... they surely know I always look at pictures of him showing his side profile. That jawline, the nose, the cheekbones ugh and that killer smile. T_T

Oh please dramagods make this drama thought-provoking and wonderfully gut-wrenching. With this cast onboard I am expecting nothing less than amazing, so please please pleaseee don't disappoint!!
Also YJG in a frilly apron cooking, and braiding hair. He's going to be the ultimate sweetheart isn't he?
And AJH is going to give me such second lead syndrome isn't he? Argh.

The posters and stills are so beautiful! But hands down what gets me is the still of Yeo Jin Gu braiding his little sisters hair. I'm such a sucker for 'momma-bear' older siblings taking care of their tiny counterparts. Love it.

I can't believe Yeo Jin-gu is old enough to have an older sibling. I remember when he used to BE the younger sibling.

Lol, Yeo Jin-gu built a bridge from connected worlds to reunited worlds. Okay, I'm going to stop now. I know that was a lame joke.
Bye.

haha, ok, I wrote kinda the same sentiment below before reading everything. He does seems to pick his project on a certain theme :)

LOL, it surely does sound very much like Circle ?
• Yeo Jin Gu as a caring brother -> check
• YJG dying in a car accident -> check
• YJG coming back to life looking the same while everybody grew older -> check

I can't wait how he's going to pull off romance with 9 years older actress!

From just the headline, I thought this will be season 2 of Circle and clicked immediately! From "connected worlds" to "reunited worlds"...

These posters look great and really make me anticipate the drama. I can already imagine some laughs and plenty of tears.

Based on the promo material so far, I have an inkling that Yeo Jin Goo will play some kind of guardian angel, who is going to help Lee Yeon Hee with her life and career.

I have a feeling it will be like that too. He came back and make sure his loved ones have properly moved on from his sudden death and leave them happy T_T

Happy with both leads. Yeo Jin-gu is stellar, and Lee Yeon-hee in Miss Korea is one of my favorite performances in dramas. Hoping she'll pull off something similar here.

Just give me a happy ending. That's all I ask.

YJG seems to be my forever bias. He is so young I'm going to still be squealing about him when he's an ahjussi. He's terribly talented, obviously, but I do still see room for growth in him--it's actually a really nice thing, and gives me something to look forward to with each role he takes. I have no doubt I'll have moments during this drama where I'm like "I knew he was good, but DAMN boy." Can't wait.

Yeo Jingoo's side profile is so perfect and gah... I'm already having feels just looking at his character poster. I'm absolutely not digging Lee Yeonhee's bangs here but she's still really pretty. The director said in an article a few days ago that Lee Yeonhee's acting is different from what she's done all this time, so I'm having my hopes high.

And gah I just saw the 2nd teaser last night and it's gorgeous! Jingoo and Chaeyeon have really good chemistry so far, and my heart totally fluttered in this teaser T_T Absolutely looking forward to this now, I need me more Jingoo!

i'm perfectly sure i'm NOT going to have second lead syndrome because yeo jin goo is the main lead! :D

LOL High five! I'm way too biased to have a second lead syndrome when it comes to Yeo Jingoo. I'll always end up rooting for his character's happiness no matter what.

I chose to have panda eyes, than I don't have any drama to watch though :P

Wow, I really like how the quotes on each character's poster are exactly the same words, but mean different things because of the context: What each character desperately wants is different, and also there is no subject (in the grammatical sense) attached to the verb "return", which opens up the way for different interpretations as to who or what is returning. Cool wordplay! ? Here's to hoping that each of them will get what they desperately long for... ?

Big giant no to those bangs on Yeon Hee, but a big yes to everything else. I really want this to be good.

I can already see that this show is going to be the death of me. I'm almost scared to watch it. Yeo Jin-gu is a double-edged sword with me. He's so good that I have to watch; but then he's too good and I'm afraid if things don't turn out the way I want, I may end up breaking something.

Oh my we have the same sentiment! I can't resist him but he makes me cry too much in his dramas! Is it too much to ask for him to be happy? Haha

Yeo jin goo❤ so glad we get to see him on back on our screens so soon.

I'm excited about this one! Fingers crossed ?

Oh my heart, why do you have to show me Yeo jin gu dying again ?
Is he just going to be a guardian angel in this show? I want him to end up alive but he's going to tear out my heart again in this show I can feel it....but of course I won't be able to resist. Please don't make me cry too much show ???