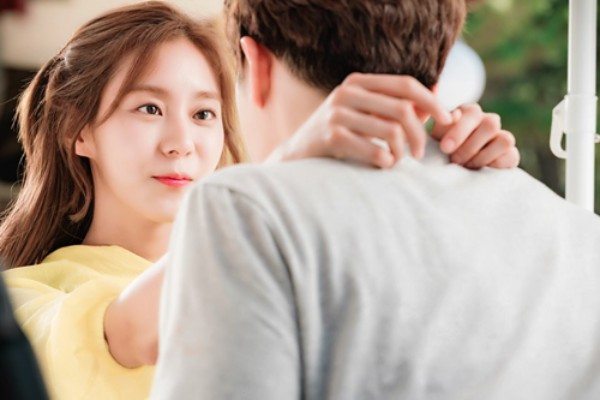 UEE (Night Light) gazes adoringly at Jaejoong (Spy) in the new stills for their upcoming fantasy rom-com Manhole. He plays a recently unemployed layabout who falls into a manhole by accident, only to discover that it’s a portal to the past. In the present, after learning that his longtime crush and best friend (played by UEE) is about to get married, he decides to jump back into the manhole to rectify the past and declare his love for her.

But of course things don’t go that smoothly, especially since Jaejoong can’t control when in the past he lands. A whole series of unintentional changes ensue in the present due to the butterfly effect of his mere presence in the past, and he needs to keep going back to patch things up as he causes more mishaps.

These new stills show a scene from the past where UEE has gone to visit Jaejoong by the beach, where he’s working at a summer part-time job. The atmosphere is sweet and romantic as she helps him put on sunscreen so he won’t burn in the hot sun. Jaejoong looks like he’s been hit hard by Cupid’s arrow as she concentrates on covering his whole face. 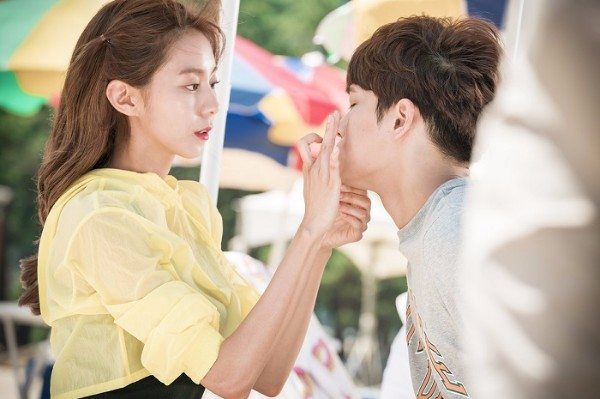 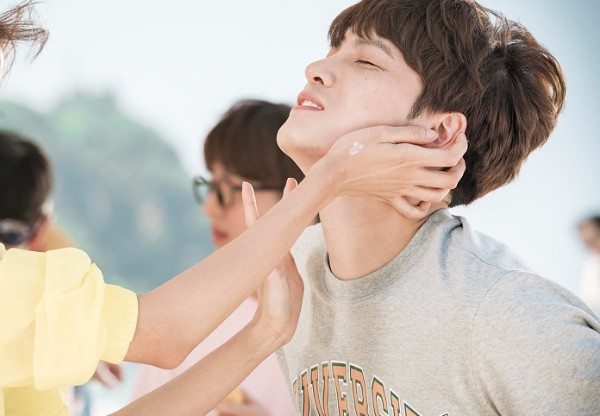 This is super cute wow okay sign me up

I've been trying to resist this, but it's pulling me in...like a really cute magnet

I admit I shamelessly squealed when I saw these stills. They look so cute together.

Look at that hand. She's so skinny :(

Ikr, I'm worried about her weight loss. She's so skinny in Night Light, and here too.

She had been skinny for a while. Even before Night Life.

I hope Ms. UEE succeed in this Drama, she had been cast lately in good shows (and she nailed her roles). And for some reason I have a soft spot for her.

I have a soft spot for UEE too and that's since You're Beautiful. She didn't even have a nice character there. There's something about her that makes me like her so much.

She got me hooked in Hogu's Love. I still remember a crying scene she had, she nailed it. She had one of the best crying scenes I have ever seen, complete with big ugly cry face. ? It was so emotionally gut wrenching.

This is incredibly cute. I don't think there's any way I can't watch this.

I love the dreamy quality of the stills, and how Jaejoong seems to almost melt in her hands. Also UEE's hair is the cutest!

I think I will see it, I have seen him in Triangle and her in High Society. Even though they weren't given enough to do in those two dramas I liked their performances.

Jaejoong is literally a puppy here so cute :p

This is Jaejong comeback drama post military ? I'm signed.
but.. there is so muchhh drama

When UEE refused to be in KBS weekend drama My Golden Life (it will air after My father is strange), I was very sad. But now I'm jumping for joy when I see her in such a cute rom-com with Jae-joong. I hope it would ease the pain and fill the hole when Seven day Queen ends. T.T

I love that @tineybeanie mentioned "the butterfly effect" because the plot pretty much reminds of Ashton Kutcher's film with the same title especially the part.. he needs to keep going back to patch things up as he causes more mishaps.

Okay, more reasons to watch this drama.
Best friends turn lovers.
Long time secret love that needs courage to declare.
And most of all, time travel. ^^

My interest in this drama went from zero to WANNA SEE IT NOW after their PPAP song teaser. It got me laughing so much. And now with these cute stills, I really wish it's August 9 now! I am very worried at how thin UEE is T_T

I'm really excited for this, I love Uee and Jaejoong and they look really cute together! The premise sounds interesting too! The stills and teasers are all looking good so far, can't wait!

UEE looks so adorable in this!!!? I can't wait to see her in dramaland again with a fun rom com.

This drama look to be zany and cute, which is a fun combination. Also, they both look ridiculously cute together!

both JJ and UEE have me hooked! (just don't overdo the pineapple jingle) i do not like it :(

The plot sounds pretty much like Operation Proposal :o

UEE looks so adorable in that still!

Anything from Jaejoong I watch my bias since DBSK days XD

What is there so many time-slip drama, such as The Best Hit starring Yoon Shi Yoon and Lee Se Young; Reunited Worlds starring Yeo Jin Goo and Lee Yeon Hee; Tomorrow with You starring Lee Je Hoon and Shin Mi Na? It's getting overwhelmed. So far, my favorite is The Best Hit. I'm watching Reunited Worlds right now; and four episodes come out every week. It is difficult to keep up.

The moment I played it, I had this nagging feeling that I saw this concept somewhere. Ehhhh....the teaser for "Moonlight Drawn by Clouds"? Both dramas are by KBS2. SO maybe it is the same promo team. Good job though.

oops , wrong tab- wanted to post it for the second teaser