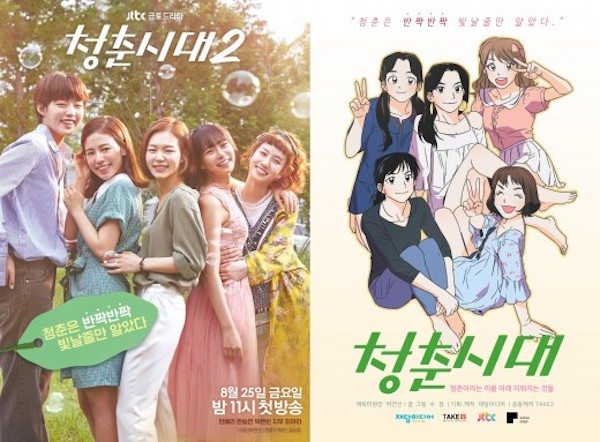 A serialized webtoon called Age of Youth: Things Erased in the Name of Youth, depicting the events that happened during the year off between Age of Youth and Age of Youth 2, is being released as the second season airs. The original was a coming-of-age roommate drama showing how university students from all different backgrounds coped with the various struggles and relationships in their lives.

In the second season, the girls return a year later to their sharehouse Belle Epoque, with many actresses including Han Ye-ri, Han Seung-yeon, and Park Eun-bin reprising their roles. But there have also been a few new additions, including rookie Choi Ara, so the new webtoon is a project to help connect the two seasons, filling in fans on what happened in between.

The webtoon’s main character will be Kang Yi-na (or Kang unni), who was played by Ryu Hwa-young in the first season. She left Belle Epoque in pursuit of her own entrepreneurial dreams so she’s no longer a part of the second season (to the disappointment of many fans), a little bit of which was shown in the first episode of Season 2. But the webtoon will show her journey and relationships with the girls as she finds her own niche. There is one new character introduced in the webtoon as well, named Seung-hyun.

The artist in charge of Age of Youth: Things Erased in the Name of Youth is Soo-jung, who is most famous for Que Sera Sera, which garnered much popularity in China and Southeast Asia. Age of Youth 2 airs on Friday and Saturday on JTBC, while the webtoon is being released through KakaoPages.

Is anyone else still silently thinking: "So, this is great and all but where's the subbed first episode of Age of Youth's second season?"

Oh my gosh, I was just going to check to see if subs were out after finishing my post below. I can take that's a big fat no.

Yes, where are the subs?!

I thought for sure DF would have it considering they had the first one...also with them losing the big 3 channel dramas to kocowa. Cable shows might be all they can get.

I read on Soompi forums that apparently OnDemandKorea will be subbing the show. It would make sense since they did sub Women of Dignity.

YES, I'm still waiting. What's going on with the webs that usually subs kdramas? It's been two days and there are no subs, just raw.

IKR! Been refreshing all my drama sites like crazy since it aired ): Last time I was this close to watching a raw was when I couldn't find subs for "You Call it Passion" anywhere!

If you have a Netflix account or can access it they have age of youth on Netflix. They definitely have it for the US netflix.

With this we hopefully will get more of a resolution for Kang unni. Now, we just need someone to translate the whole thing ?

I still am left wondering how this didn't get picked up for licensing. What is going on!?!?!? I am not finding any news anywhere. Kdrama viewing has just been a big mess lately...?

Feel the same. Watching old dramas. I feel like the rug got pulled out from under with both my DF and Viki subscriptions. Things are changing fast. Not sure if I will renew either subscription, much less spring for kocowa, which sounds like a mess too.

I just checked now and still no subs anywhere ? I was also wondering what the heck's going on...

At this point, I'm just waiting for anyone in DB to recap the show. I'm getting tired waiting for the show to be subbed ??

Where can I read this webtoon (it has english translation right??) ?? AND I WANT AGE OF YOUTH 2 TO BE SUBBED!!

There are some sites for webtoon translations but they're usually naver, I don't know about Kakao.

I think Netflix made a deal with JTBC so Age of Youth might get added after it finshes airing, like Man to Man did. And the first season is there too. I hope so anyways unless one of the other sites is able to get it first.

But you would think that Netflix would make an announcement as they did with Man to Man. I just don't know anymore ? I am already in a drama rut, and the one show that may cure me is unavailable.

I'm feel so annyoing. If they do that, they should make an announcement. VIU also don't have it.

*thanking the drama gods that my Korean's up to snuff*

*thanking my parents for the linguistic talent*

*thanking dramabeans for 7 years of k-drama watching and understanding*

Anyone know if this webtoon will be translated? Like cheese in the trap!