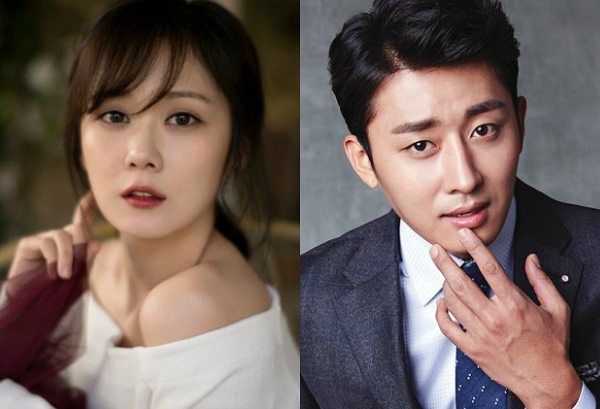 We’ve got another new variety-drama on the way called Go Back Spouses (a pun that could also be Confession Spouses), and offers are out to Jang Nara (One More Happy Ending) and Sohn Ho-joon (Blow Breeze) to headline. I honestly think the distinction “variety-drama” means very little in the current drama landscape, since the so-called hybrid dramas that we’ve seen so far—The Producers and The Best Hit—were just scripted dramas that happened to be produced by variety PDs. This new series will come from PD Ha Byung-hoon and writer Kwon Hye-joo of the hit web sitcom adaptation of The Sound of Your Heart, which garnered heaps of praise and a cult following for its witty sense of humor.

The new drama will be about a husband and wife who regret getting married, and tells the story of their “war-like, realistic life changes.” That’s not a whole lot to go on, but it does sound like a setup for relatable, everyday problems that all spouses face. I like the idea of starting with a couple where some love is already lost, which hopefully only means that the road back to happiness will be more rewarding.

I’m confident that Jang Nara could make me invested in any character she plays—she just has a likability factor and charm that goes beyond what’s on the page, and I’m always instantly rooting for her. It’s too bad that her last project Housewife Detective fell through, but that show sounded so much like Mystery Queen, which kind of cornered the market on ajumma sleuths this year. But I like the idea of this simple, relatable story for her; plus, I like her opposite Sohn Ho-joon more. They’re both so sweet… will they really play a couple at war with each other? It’s hard to imagine anything other than rainbows and puppies for them, at least until I’ve seen them fighting.

Oh my goodness, I read "Jang Nara, Sohn Ho Joon tie the knot..." and my heart skipped a beat XDDD

same reaction, thousand thoughts.. when that happend.. how..

SAMEEEE. I had to take a double-take.

LOL, i thought it's a breaking news missed by other sites

Lol me too. I was like 'how could the other news site didn't found out?'
Am I the only one disappointed that it's just a new drama? ><

I watched Sound of Your Heart and it's hilarious! So I've faith in the writer to make this drama fun! I'm glad that KBS is still having a project on the timeslot. Come on, it's the same timeslot as JBTC drama, if the channel can receive high ratings, I don't see a problem for KBS to achieve high rating with good project! Anyway, I hope these two accept the offer because I like both of them and I think they both are gonna make a great couple.

It wassss. Totally agree. The funniest thing ever, and now i wish this pd can just make that into a longer drama

Sound of Your Heart is damn funny! I laughed all the way from episode 1 until the end. ? Now I have high expectation toward this PD and writer to make this drama fun! I'm kinda excited for this drama because of them.

Probably this drama will be the last one. But nothing is confirmed yet.

Yup. Apparently this will be the last drama for this slot or so I read.

Nah, they said they haven't made a definite decision yet according to this Soompi article https://www.soompi.com/2017/08/05/kbs-responds-reports-end-friday-saturday-dramas/

I was happy to read this news earlier today! I can never dislike Jang Nara in anything. She is not only a baby face queen but also a candy queen.. ? This is like a blessing, we got to hear two possible projects for Sohn Ho-joon this year who I think is charming on screen too. Yeay for more mini series for Ho-joon.

Anytime I see Jang Nara, I can't help but think of Seo In Gook, don't even know why. Though I did love their, surprisingly normal, subtly incredible slow-burn(rare for a Kdrama) in IRY.

Maybe im the only one, but never liked him, i don't know why, maybe is his face or something.

I'm on board for this pair!

I totally agree that Jang Nara is just so darn likable. This sounds like a great project for her so I'm looking forward to it! I haven't watched anything of hers since I Remember You.

Oh, just looked it up and the only thing she has been in since is One More Happy Ending. Well, I didn't see that, lol.

I like Jang Nara, but I think Son Ho-joon is a horrible actor. I watched him in Blow Breeze and he was so damn stiff.

Aw, was he? ? He's one of the actors I really like as a person and he was a fave of mine acting-wise from Reply so I was hoping he'd do well in his dramas. Maybe he needs a better project and hopefully this one (if he confirms) and the special drama with Jo Boa will work out for him ?

I beg to differ. In Blow Breeze, the writing was so terrible, and the male characters were so dumb, including Han Joo Wan's character. I don't think he is that great as an actor, but he is not a horrible. Depends on the script he can do well and serviceable. In BB, his character was so plain and he might also didn't know what to do with his character.

Whoo, good to know! Maybe he really just needs a good project with a very good writer and PD :)

Wow, really?? Blow breeze was where I loved him like crazy... Oh wells haha

Hmph I wonder why it's airing on the Friday-Saturday time slot instead of prime time.

Because it's a 'variety drama'.

The Best Hit gave up on the 'variety' element halfway through and turned into a rom-com, so yeah, I'm a bit skeptical about 'hybrid' dramas now. I still enjoyed it immensely, of course... Maybe I'm just bitter I didn't see Ji Hoon and Drill actually debut. (Wow, I am complaining a lot today lol). #spoileddramawatcher

Yah. The only one I can see is a 'variety drama' although they don't promotion about it is Super Family, which included a lot of interview character scenes also epilogues, every ep is a open ending.

I don't get what they mean by variety drama hybrid. Like I've never seem one. Why do they even have this category? What is it supposed to be? Do the axtors make up their own lines? Do plots not depend on writers? What does this mean?

Look, it's Haitai!!!!!! I've missed him since Reply 1994 and I couldn't get my hands on his Three Meals a Day so I guess I'll just continue watching Youth Over Flowers from where I left it.

Also this "...will they really play a couple at war with each other? It’s hard to imagine anything other than rainbows and puppies for them..." I totally agree I screamed "I knoowww" unknowingly at office LOL

Glad to hear that Jang Nara will be back for another drama! She really is likable!

Wish the drama would air at an earlier timeslot...

Jang Nara!!! Yay! I was waiting for her return! Loved her in "Hello Monster" with Seo In-Guk ?

I think I would love this, can't wait for October :P