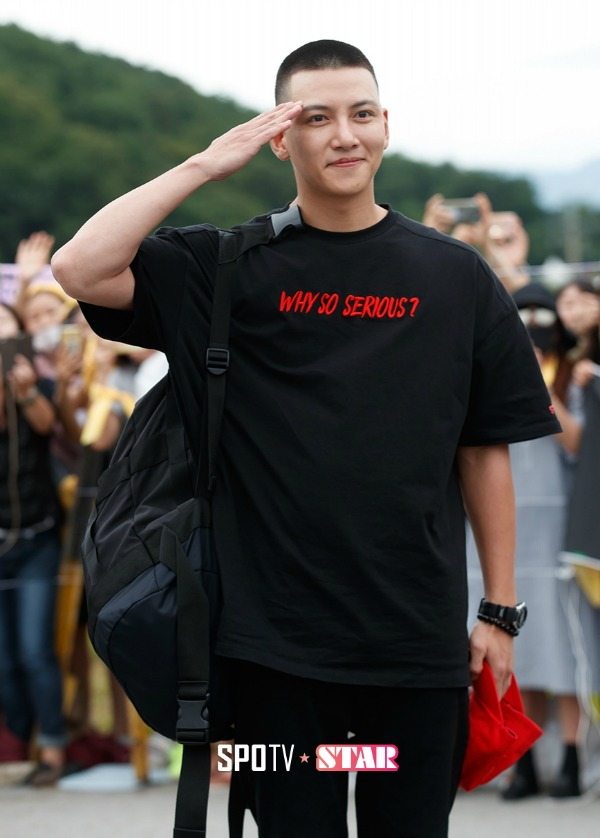 And another one goes! Ji Chang-wook (Suspicious Partner) reported for army duty on August 14 in Cheolwon, Gangwon-do, to begin his 21 months of active military service. It’s been a particularly harsh year of losing dramaland leading men to army duty, as this is the last year for everyone born in 1987 to begin their service, and there’s just a weird constellation of leading drama actors who were born that year.

Most enlisted quietly, and Ji Chang-wook planned to do so as well with just a farewell picture he put up online, but fans and press reportedly swarmed the training center anyway. Thankfully for us, that means lots of pictures of Ji Chang-wook with his newly cropped hair, giving his fans one final farewell.

Ji Chang-wook debuted in the 2008 indie movie Sleeping Beauty, and first became known through family dramas Sons of Sol Pharmacy and Smile, Dong-hae. He managed to fit a lot of genres into his filmography since then, from action (Warrior Baek Dong-soo, Healer, The K2) to sageuk (Empress Ki) to melodrama (Five Fingers), just to name a few. It was probably his action roles that got him extra notice, though if you’ve seen Healer or Suspicious Partner, you could argue that swoony romance is as much his area of expertise.

With a hit romance drama under his belt just before enlistment, it’s probably safe to say he’ll be getting comeback drama offers months before his return. We’ll be waiting! See you in 2019! 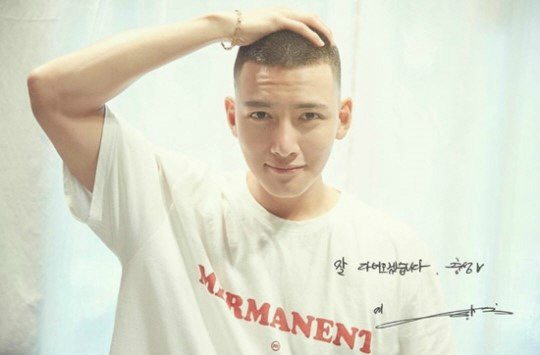 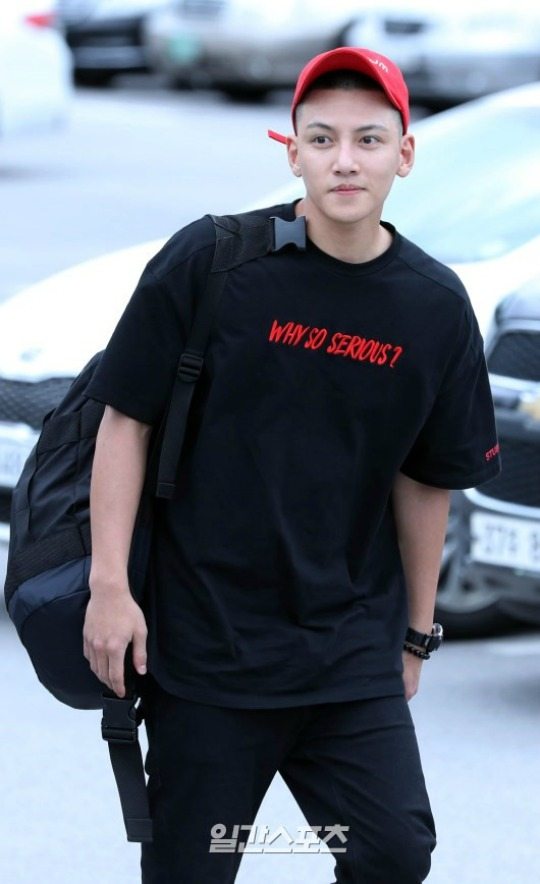 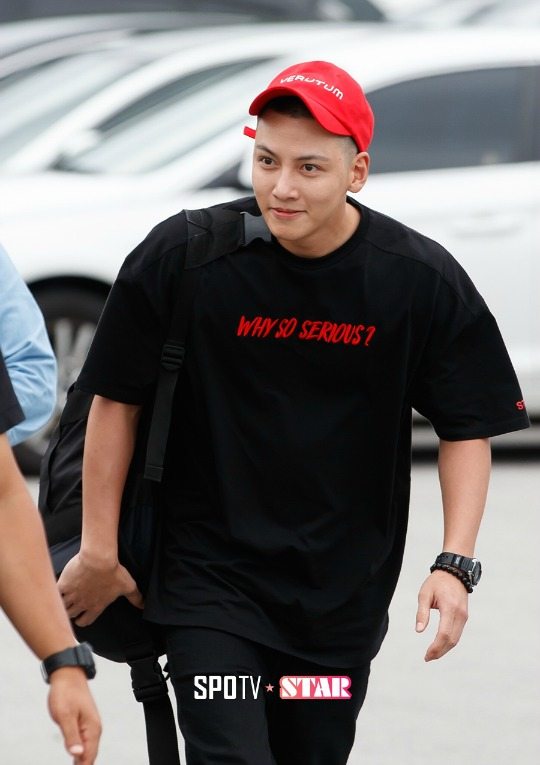 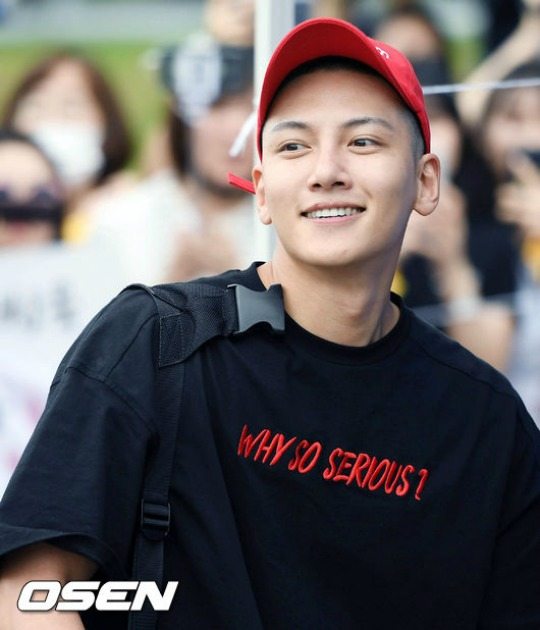 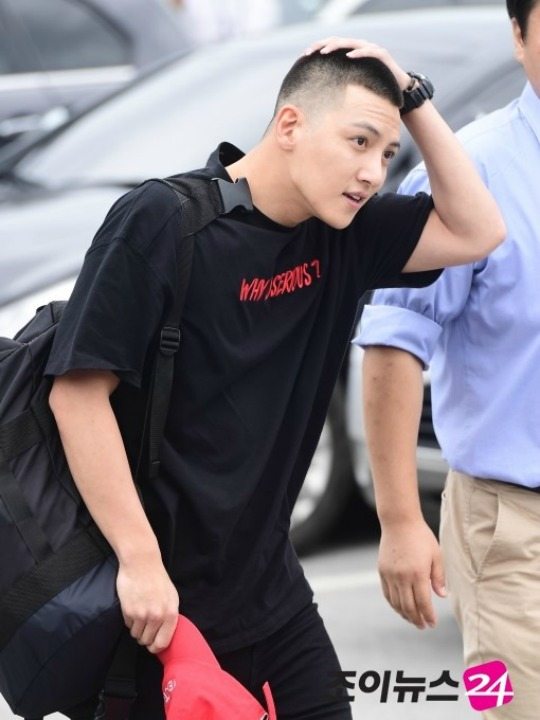 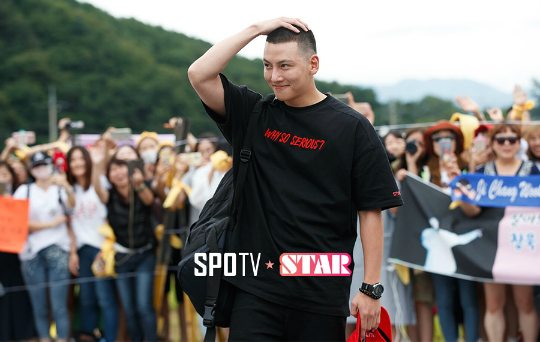 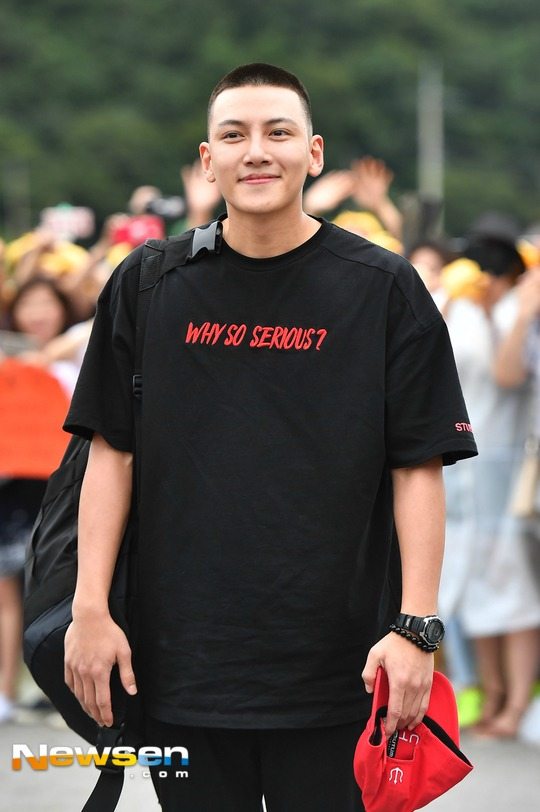 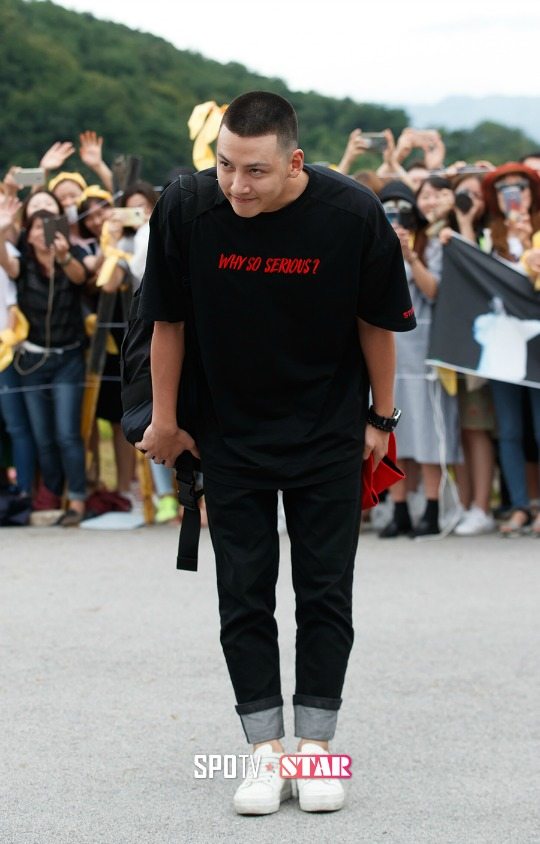 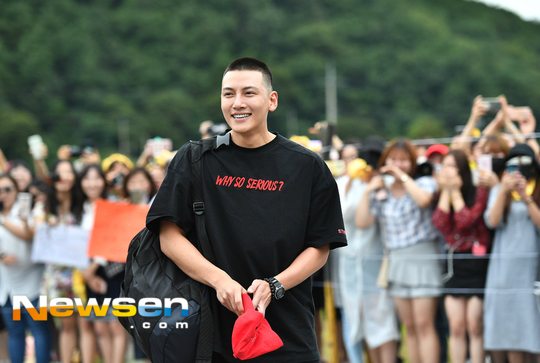 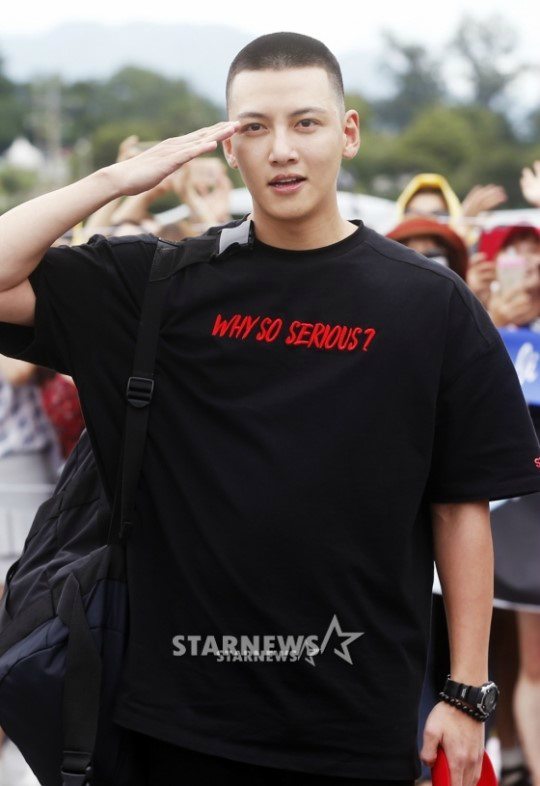 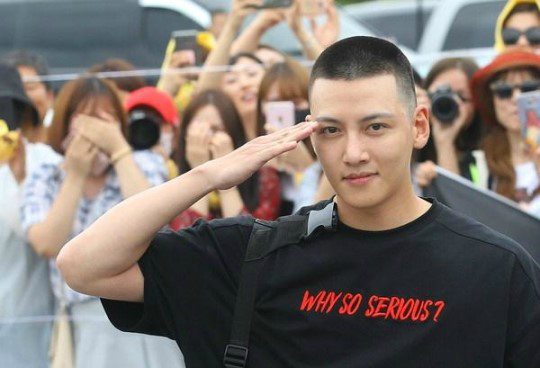 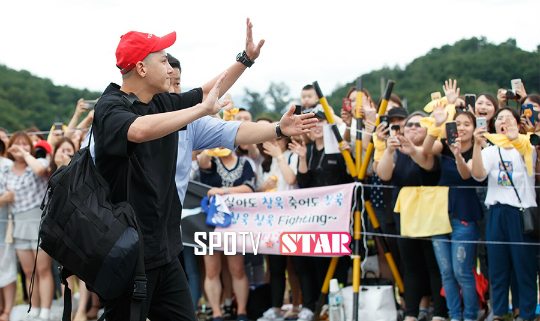 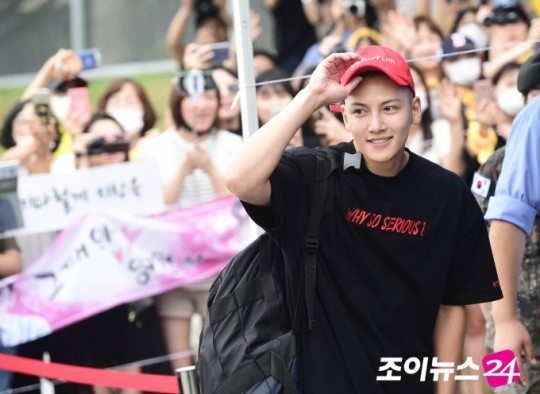 Healer was the first drama I truly fell in love with when I started to watch Kdrama's, Ji Chang Wook is one of my top male actors, will miss his face but so proud of him!

Will definitely miss arguably one of the best kissers in k-dramaland with his pillow lips. Hee, Hee. All of my top favorites are going to the military, including ji chang wook. Hope he has a safe and healthy military service.

See u again in 2019 and will be waiting for your great project...

He even documented how he got that hair. I thought I was ok with him going till I read this post.

*Raises hands*
We'll get through these tough times together buddy.

*continues to cries in a corner* WAEEEEEEEE

I'm using it to study Korean so I'm watching each episode four times. Should keep me going for a while!

Meeee!! I thought it was really weird that I was so heartbroken about my oppa leaving. It consoles me to know Im not alone and that its normal, I am normal.hahaha we will patiently wait oppa!

Bye oppa! Stay safe! I'll be waiting for your comeback. ?

7 ✂️mintkiri is looking for her 👠

O come ooonnn..... how many more should I be losing this year???

Did he intentionally wear that shirt? :)

I have seen few actors and idols pics og the day they finally start the enlistment and I is a long time since I have seen a smile that looks genuine and somewhat peaceful.

Wish him all the best during his enlistment and to return healthy.

Of all the actors who already enlisted this year, dramabeans decided to make it harder to move on buy posting an article of his enlistment. I guess it's time to finally say farewell for now.

He looks hot even in that military buzz cut.

K2 finally getting the training to be the K2. :D
And that t-shirt is like screaming out loud, how we actually feel the same.

And GF, I'm so glad that you guys are covering off topic news lately, like koala hehe.

His shirt though ? Will miss you Wookie :)

It was through healer I got to know your name. Until 2019 be well and hopefully come back with a good project ???

After about 10 years of silent lurking I have to delurk to say goodbye to my favourite. he looks even better and manlier with this hair.
As someone who had to do to 2 years conscription myself (we have mandatory service for both men and women in my country) I can say it sucks, but remains a distant memory after a while. JCW fighting!

I love this guy so much! But who else born '87 still has to go to the army? Jang Geum Seuk?

One more leaving from my list of favorite actors! I hope my dramaslump doesn't continue till their return! You will be missed Wookie?

Tiny complaint against Dramabeans though... so many actors have left this year already but why a special post for only Wookie? Or maybe I am wrong and there were other such posts for Joo Won, Seo In Guk, Lee Soo Hyuk?

They had one for Seo In-guk.

I think they don't have as many people covering news cause you have to be able to read Korean so it's harder to catch it all.

Yeah... his was one of the points in a news update post.. I was talking about a separate post... but still I guess I should be thankful.. plus Wookie is more popular on DB... Healer is a historic show vis-a-vis Dramabeans ??

They've done a few others but yeah not often. http://www.dramabeans.com/tag/army-duty/

I already expected Lee Soo Hyuk will enlist quietly/ninja style because he lay low and just done a few photoshoots for magazines and a cameo in a Japanese dorama. *cries*

Yeah I remember Lee Seunggi being the only actor other than him that DB wrote a special article for. Maybe they are DB's favorites?

Well, their bias is showing.

of all the oppas enlisting this year, His has a great impact on me..
Even watched the Bachelors' Vegetable Store just for him. I'm not into watching long dramas too but I watched Empress Ki for him. Who's with me here??? Let's all cry together.. Uwaaaaaah. Wookie Oppa. See you in 2019.. :'(

Same. I was preparing and dreading for this one more than others. When I saw that shaved head pick yesterday, I decided that would be my Facebook profile pic for the next 2 years. That's how bad it gets. Hihihi!

My faveswho enlisted this year, but didn't have an impact the way this one did are:
Yoo Ah In
Seo In Guk
Im Si Wan

This is Korea breaking my heart at it's finest.

Yoo Ah In did not enlist. He had his fifth medical evaluation and is now exempt from the military because of a bone tumor.
Seo In Guk did enlist, but was sent home after a few days and is now also exempt because of a joint disorder.
I'm pretty sure the impact with these two is that knetz somehow feel they still got away too easy.

*emerges from my lurking corner just for Ji Chang Wook*
Bye Healer-ya, be safe and take care! Dramaland is going to feel very empty without my all-time favourite actor ???

You don't salute to your empty head.

My first reaction (truthfully, not sure if I'm proud of it): WAAAAAAH HIS HAIR IS GONE!!

we cry for a lil bit (or who am i kidding, for all of the 2 years he's gone), then we await his grand return.

we miss you already, JCW!

He's been really excited about his enlistment, so I hope he has a fantastic time away from the spotlight and meets many lifelong friends.

I will miss him a lot. 'Why so serious?' T-shirt is so cute. It won't be too hard for him in the army since he has gone through many difficult training for action dramas and movie already. Yeah, he looks like he is so ready for it!

Another one goes away :( Bye, JCW, stay safe and happy. Here he goes with Jung Il-Woo, Lee Min-Ho, Kim Soo-Hyun, Kang Haneul, Seo In-Guk and Lee Soo-Hyuk. It's going to feel a bit empty in dramaland without them.... :(

I've liked Ji Chang Wook since I first saw him in 2009 Hero, which was my first Korean drama. He and Lee Jun Ki have been two of my favorites ever since. I'm sure he'll do well, although the current political climate makes it a little more serious for whoever is currently serving. May they all return safely.

37 Fatcat lost her way while on semi-hiatus

DiTTocan't believe I read all the comments.

Don't have the Hangul-'Yoo' key at hand right now so it's not that I am crying less with the T's -- 'oo' criesTTTT!!!

The thing I love the most about Ji Chang Wook's enlistment is how many times he has said in interviews that he is looking forward to serving and hopes to be assigned to a combat unit and maybe even near the DMZ. He is such a regular all-around good guy, non-spoiled celebrity, that I believe he will be a great soldier and will serve his country well...perhaps even rise to become leader of his unit...that wouldn't surprise me at all. JCW, you have raised the bar for how Korean celebrities SHOULD conduct themselves when stepping into this important time in life. Lee Seung-gi, Jaejoong and so many others have done well too. I'm proud of them all and wish them a safe two years.

I forgot to mention Lee Min Ho and Kang Ha Neul, Jung Il-woo and all the others who have entered quietly and with great dignity this year. Bless 'em all.

Yes I love his attitude about it! It makes him so so cool. I wish the other actors would also embrace this duty with more enthusiasm. I know it's a tough 2 years to be away from the comforts of their hallyu life but I believe they grow and mature after the training and this maturity enhances their skill as an actor.

JCW is athletic and smart, so yes I do agree with you too, he will probably lead a unit and make lots of new friends.

Wishing Ji Chang-wook good health and safety during his time in the military.

Ji Chang more handsome with his short haircut woow !!! Goodluck for your Army Duty and back safely

Sorry.. but I'm really excited for all these young actors going to army.. let's see who will take their places while they are on duty!?
Come on KSH and LJS, you too go join your colleagues.. you are no better than them

*sobs* why is everyone leaving me *sobs even more*

Not if you rewatch XD

We will miss you. Stay healthy. We all have post army abs to look forward to. ?The countdown begins.

Wait a minute...which hit romance drama was under his belt? Suspicious partner wasnt a hit or was it? Anyway goodluck ji chang wook!!!

Not like my Baby Boy was a man already, but the 3rd Infantry Division in which he enlisted has an amazing track record of turning recruits into mucho manly men. Looking forward to the results on 13 May 2019. ?

But I'm still in a puddle. Check in with me again in a few days after it finally sinks in. ?

See you in 2 years darling

Been steeling myself for this since mid last year, but suddenly 2019 seems a long way away... O.o

I'm in pain. Take care and we'll wait for you, Wookie!