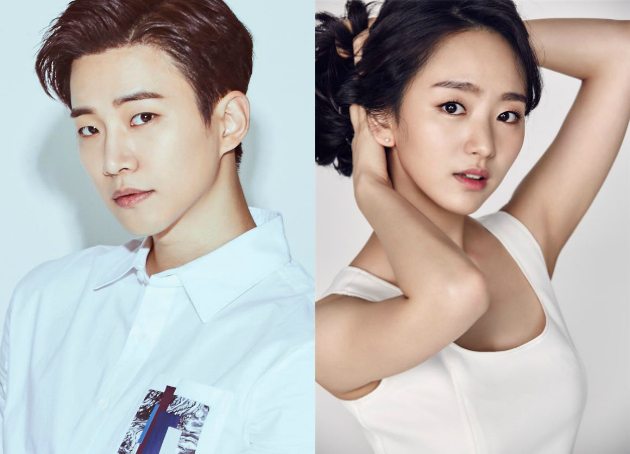 I adored Junho’s redeemed villain role in Chief Kim, so I’m ecstatic to hear he’s coming back to dramaland this year, and as a lead at that! It doesn’t sound like his role in the upcoming JTBC drama Just Between Lovers will be anything similar to Yul from Chief Kim, but it’ll be nice to see him branch out into different genres, and especially as a romantic lead. Joining him as the female lead is rookie Won Jin-ah, whose credits so far only include small supporting roles in films like Age of Shadows and No Tomorrow.

Just Between Lovers will depict a warm love story between two people who are described as “great” because they are able to withstand the harsh winds that blow in their lives, and are able to appear calm on the surface while doing so. These deeply wounded people will shelter and comfort one another, and through their bleak everyday lives, they will learn that hope comes from people and that love is the only redemption.

Junho will play Lee Kang-doo, a former aspiring soccer player who loses his father in a sudden accident. That same accident breaks his leg, which requires 3 years of rehabilitation and means that his dream of becoming a soccer player is now unattainable. With no parents, skills, or degree to fall back on, Kang-doo goes on to live a hard life in the back alleys. However, he’ll start to slowly change after meeting Ha Moon-soo (Won Jin-ah), who fiercely protects the normalcy in her daily life, all while hiding the pain she carries.

Moon-soo works at an architecture firm, and suffers from survivor’s guilt after getting into an accident that causes her younger sibling’s death. She carries the burden of feeling like she has to live her sibling’s life for them, and presents a smiling facade while also caring for her mother. She will only start to deal with the pain she’s kept suppressed after she meets Kang-doo.

Oof, that sounds like heavy stuff. And I’m sure the writer-director duo for the show will be able to bring the heartbreak: Screenwriter Yoo Bora co-wrote Secret and PD Kim Jin-won’s previous credits include melodrama Nice Guy. But I’m hoping that the tone of Just Between Lovers will skew more towards another of PD Kim’s shows, Wonderful Season, which had a lovely sentimental vibe that counteracted a lot of its melodramatic elements.

Although I liked Junho best in Chief Kim, he’s also put in great performances in other films and dramas, like Memory, Twenty, and Memories of the Sword, so I’m not worried about him pulling off a lead role. On the other hand, I don’t know what to expect with Won Jin-ah, since I haven’t seen her in anything, but it’s heartening to see that she has some bigger supporting roles in A-list Chungmuro projects in the pipeline: Between later this year and 2018, she will appear in Money with Yoo Ji-tae and Ryu Joon-yeol, and Steel Rain with Jung Woo-sung and Kwak Do-won. Here’s to hoping she has a successful drama debut as well!

JTBC’s Just Between Lovers is scheduled to commence filming soon, and is slated to premiere sometime later this year.

Good for the man of a thousand facial expressions. Romance ain't my thing but he can do more of my things later. Sharp actor.

Chief Kim and Yul will always be my OTP. No romcom heroine can get between them in my heart.

well after 3 years in a hiatus, kim jin won finally back. 2 drama in one years, I'm not complaininggg though!

I'm looking forward to this. Junho was really quite good as Seo Yool in Chief Kim. He's quite the looker as well, so I'm going into this mainly for him at this point. Don't know much about Won Jin-ah. I just hope she does a good job and the script is good so the show becomes watchable at the very least. I would say I've been surprised by Kim Se-jeong as Eun-ho in School 2017, so this gives me hope.

In this case the idol casted was Jun Ho xD but he deserves it!

Haha you know what I mean, the typical idol-turned-actress for the lead role, but can't act. I won't say all, but most of them. So I'm glad to see rookie actress coming from acting background instead. Jun Ho is already established as an actor on his resume, so he's not just an idol to me. ?

So waiting for this one.
His Gluttonous Sociopath Seo Yul in "Chief Kim" was just ?.

I loved Junho in Chief Kim, he made that show absolutely delicious. So happy he's getting a lead role, I'll watch this boy in anything.

Every broadcaster is trying to get a hit along the lines of Fight My away. Junho is great but I'm not too sure about the female lead. Hope it's not a too depressing show. What genre is this drama supposed to be ?

This sounds like it could be a really good melo which I honestly have been craving especially if it's set in winter will just be perfect. I wonder where they are going to fit the show

I loved Junho the best in Chief Kim and glad he gets his first lead role. However. I do think it would've been better for him to have a bit more experienced actress as female lead. But Won Jin Ah might become the next rising star in chungmuro, so maybe this pairing would work. She was also chosen based on audition.

This drama potentially to be a good romance melodrama with the team behind (Kim Jin Won as the PD & Yoo Bo Ra was the second writer for Secret Love) so hopefully this drama will turn out great.

Why do I feel like they were both involved in the same accident?

That's always the norm in kdramas anyway, wouldn't be surprised

Yeah.. There're already too much of this trope in dramas (including in recent School 2017)

Because the world in k-drama land is so tiny. Everyone and their mother should be involved with everyone else, no matter how weird, rare, or impossible their relation is

I don't like that cliche in kdrama but if they are going to use that, I hope they'd use that in an interesting way (idk how that is hahaha)

I tend to roll my eyes and pretend like that storyline isn't happening. But School 2017 hasn't really imposed the intertwined fate too much.
It happened, but there isn't any angst around it. Imagine if they made Tae Won angry at Eun Ho for living.
I hope this story doesn't drag out the cliched, annoying plot. The show has a melo tone to it and I'm worried it might be another Uncontrollably Fond.
I really like Junho and wouldn't wanna see him a role like that. ?

Yay, I'm so excited! It's been so long since Chief Kim, I miss him already. Can't wait!

Yesss I've been waiting for Junho to be lead ever since I saw him in Twenty. Chief Kim really solidified his abilities for me. He's such a natural actor, and with a plethora of facial expressions too.

Seems like they really went through a thorough audition process for the female lead, I read that they went through 120 actresses. I'm looking forward to this.

So happy with the news! I hope through this project Junho could show a lot of other sides he hasn't showed in his previous works ? I've never seen or heard the female lead before but heard that she had been in a few movies as supporting and leading role so I trust her for now ?
When I read the story's summary tho, I went like "so tragic?" ? I won't get my hopes too high (bcs so many dramas I actually anticipated ended up being not that interesting for me...) but I am excited for it!
I hope it'll be executed nicely ?
P.S ; it's nice to see a fresh face as the female lead!

I loved Jun Ho in Chief Kim but that sounds too melo for me , I'll check the review to decide if it's worth watching or not ^^'

......The story seems very deep.... the first time I heard about survivor's guilt was in tomorrow with you
Even though it was low key it damaged her up quite a bit. Looking forward to see how they would portray this one

Wow, new face. It's about time we get some new faces. I read the synopsis in Asianwiki and I thought it was melodrama romance. Is it or is it not? I really wanted some of that. Rom-coms are too much fillers with some random mystery. I just want pure romance and feels.

I'd love if the tone could be something like Alone in Love.

it is melo. from the director and writer, it sounds promising ;)

Before Chief Kim, I wasn't so sure about Junho's acting, but he really impressed me in Chief Kim, I loved Yul because he pulled him off well! I don't know anything about the actress, but I'm more worried about the story, it seems heavy and sad and a bit too much! I don't know, I just wait for it anyway! ^_^

Whoa! Junho, at last. I've been waiting for his next project after Chief Kim, glad he's the lead. But I was hoping to see him in a RomCom. Is that too much to ask? Heol...

Junho has been doing good work and he recently impressed in Chief Kim. Looking forward to seeing him as the lead in this new project.

This makes me happy. :) I wanted to see Junho soon again on screen. ^^

will try to watch this for junho, he was beyond adorable as the frenemy of chief kim, their bickering (very funny!) and his pupply love with nam sang mi's character was beautifully played:)

I'm just happy that an actual rookie actor got a role and not an idol at this point. It's nice to see some fresh faces in dramas. Hopefully she'll be decent so I don't eat my words

Who wants to bet that the two accidents mentioned are actually the same one? :)

Count me in! Although, I hope they don't do this.

I don't care for the plot, but it's Seo Yul of the Flawless Skin! Of course I'm in! ? I'd be happy if the drama just showed him eating his way out of the alleys and into normalcy anyway ?

I'm so happy! Wu...hu.. I've been stanning Junho since I rediscovered him in Chief Kim. When I first saw Seo Yul, I thought "who's this actor? I think I saw him before but where? Erm.. gotta check him out." And then, I was shock to find that he's from 2PM. I knew them since Dream High (or is it before?) but hadn't really follow them after Nickhun's WGM days. Never I knew that he could act. So, I'm thankful to Chief Kim for letting me to discover new actors like him and Dong Ha. Hopefully, he could succesfully pull this off.

Never heard the actress before so I don't know what to expect. I'll probably check out her projects especially Age of Shadows. It's been on my list for a while.

So, will this be a melo? I thought this will be kind of like FMW or SD when I first read about it. Erm... I hasn't been in melo mood nowadays. The last melo that I watch is Marriage Contract. Nevermind, I'll watch this just for Junho.