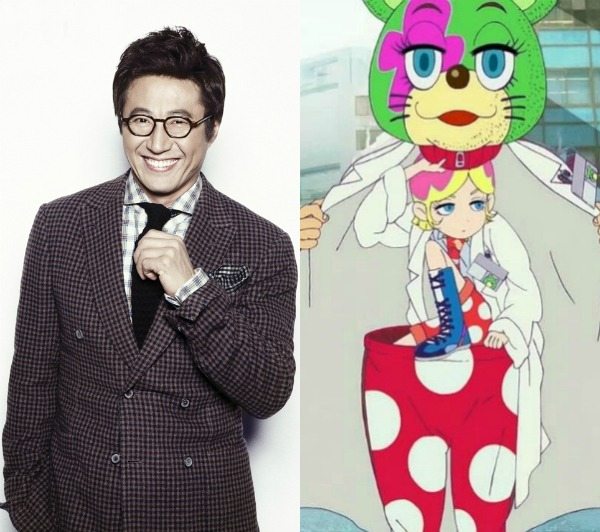 An eccentric, immature psychologist, a nurse who wears supershort shorts all the time, and Park Shin-yang (Neighborhood Lawyer Jo Deul-ho)—SBS’s Flying Trapeze sounds like a hoot! Recently, confirmation news came in that Park Shin-yang would indeed star as the “bizarre doctor with a hippo-like body,” and that SBS has put this drama on its schedule for late fall.

Flying Trapeze is based on a Japanese novel by award-winning writer Hideo Okuda that was adapted into numerous other formats: anime, television, theater. At its core is Park Shin-yang’s character, Dr. Irabu (who was played by Hiroshi Abe in the Japanese drama): He’s an irascible stubborn psychologist who challenges his own patients and loves administering injections. Keke, after Neighborhood Lawyer Jo Deul-ho, I can already imagine Park Shin-yang adapting perfectly into this oddball role.

Throughout the drama, he’ll face a variety of different cases, and by helping his patients find the source of their illness, he learns to feel happiness. I’m loving some of the descriptions of his patients already. One is a mid-level mafia boss whose knees knock in fear when he sees sharp objects. Another is a veteran acrobat who suddenly begins to fall every time he’s on the trapeze swing (he’s the one that the title refers to). And finally, we have a young doctor who feels an obsessive compulsion to rip the wig off his father-in-law’s (who also happens to be the hospital’s CEO) head.

SBS’s Flying Trapeze will air starting in November in Reunited World’s current time slot, after While You Were Sleeping ends its run.

It definitely seems to be a very good drama and a bit orthodox, definitely going to watch:)

I haven't watched any of Park Shin Yang dramas, so I'll trust the good reviews of Neighborhood Lawyer Jo Deul-ho saying he did a good job.
As for the plot, I love that, I've stopped watching animes years ago , but this type of humor is a most welcome for me ?
The cases are already making me laugh ㅋㅋㅋ

Sounds promising. He's an audience favorite but such a unique type, it must be hard for him to find the right script.

Well this definitely sounds interesting ..... and it can go in all types of directions from hilarious to poignant given the variety of patients.

I've also never watched actor Park Shin-yang in any of his previous projects, so he's totally new to me. Looking forward to checking this out.

Sorry, that's hardly related. I crave anything to do with psychology, like Dr Frost. This sounds great.

My first thought was, Is the title of Japanese version the same?

Although I like Park Shin-yang well enough, jdramas usually work better for me so if that one already exists (and with such a Japanese premise) I'd rather give that a try. (Might still try the Korean adaptation though.)

"And finally, we have a young doctor who feels an obsessive compulsion to rip the wig off his father-in-law’s (who also happens to be the hospital’s CEO) head."

What a coincidence! I recently rewatched Park Shin Yang's drama, Painter of The Wind and now I read this news. Can't wait!

... a young doctor who feels an obsessive compulsion to rip the wig off his father-in-law’s (who also happens to be the hospital’s CEO) head.

Can it be autumn already?? There are so many interesting shows coming out

Oh wow! I watched the anime and was completely enamoured by its eccentricity and experimental animation style... and I didn't know it had a Japanese drama adaptation. It'll be very interesting to see how this turns out!

Oof. Sounds almost too zany for me. I'll have to see more info on this one. The description about the nurse wearing short shorts remind me of when Lee Sung-kyung's character in Doctors went rogue and wore short shorts and super high heels. Ha.

That craziness is definitely out of a Japanese manga world. Turns out Japan had made two adaptations of it already according to asianwiki?
Japan usually does best at doing that kind of crazy plots in doramas (this kind of plot doesn't even sound that weird in doramaland hahaha) and I'd like to see how Korea would pull that.
Have never watched any of his dramas (except trying an ep of Neighbourhood Lawyer) but I'm pretty excited :)

November seemed like a good month for dramas. I hope none disappoints xD