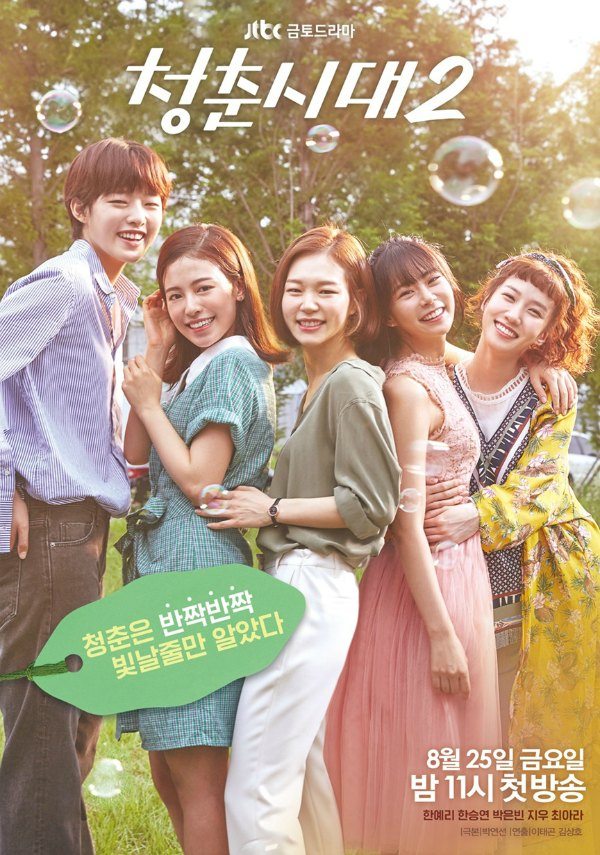 This week we finally have the premiere of JTBC’s Age of Youth 2, the sequel to last year’s critically acclaimed sleeper hit about five college-age women who share a house together. It’s one of dramaland’s rare sequels that’s actually a sequel and not a spinoff, so we get to pick right back up with the Belle Epoque girls and see how they’ve grown and changed since we last saw them.

Reasons to watch: The obvious reason would be if you were a fan of the first season, though that probably means you’ve already penciled the premiere date into your calendar. The writer, Park Yeon-seon, is a major draw for Age of Youth, as she has a very eclectic sensibility and a knack for creating cult hit dramas (like White Christmas, Mixed-up Investigative Agency, Alone in Love). The first season of Age of Youth was an unexpected mix of mystery and slice-of-life, and the series was praised for its relatable and realistic portrayal of youths. They struggled with jobs, college, boyfriends, and parents, all from the perspective of five very different young women.

Of course, at the heart of everything was the friendship that developed among the five girls. The trajectory from passive-aggressive roommate wars to eventual understanding, growth, and emotional support was genuinely touching (not to mention that the petty fights were hilariously realistic). The second season brings some changes to the cast: Ji-woo will replace Park Hye-soo as the wallflower maknae, and Ryu Hwa-young will only be returning for a cameo as badass Kang Unni. There’s a new mystery this season and a new roommate, and love interests lined up for all of the girls.

The best news is that writer Park Yeon-seon has said that work for Season 2 began when she realized that she had more of Park Eun-bin’s story left to tell: “Concluding Ji-won’s [Park Eun-bin’s character] story was the trigger for Age of Youth 2.” She was my favorite character and the one who held all the girls together with her sunny personality, so I’m thrilled that she’ll get a bigger storyline this year. Can’t wait!

Watch this for Song sunbae!

Agreed! I'm only now watching Age of Youth - and Song is easily my favourite housemate. I'd love to be friends with her in real life, and am completely failing to understand why men don't like her.

Because the men she's gone out with have a distorted view of what a woman should be like.
I'm sooooooo happy that the writer appreciate the gem that is Ji-won, I want half of the drama in its entirety be filled with her story arc! Thought she was neglected in the first season in favor of some of stories that were going in circles.

:/ true, so true.
I'm actually glad she's getting a love story in this one, because she's fabulous on her own, and some man, fictional though he may be, is going to be lucky enough to get some love ^^

Is it already mid-August ? ?
I've binge watched Season 1 a few months ago, so I'll watch Season 2 for sure .
Yoon Sunbae hwaiting ? ?

Does it make me really shallow that I'm super excited about all five boys? I can't wait to see all the messy interactions this season!!!

girlfriday, you already forgot about Single Wife on Aug 23? I can't find any new information about it. So sad!!!!

You can go to IG dramax_single wife to check the updates. I have in fact shared the posters in my fanwall before.

Nervous, but i'm sure it will be good

One of my classmates at university started to watch dramas a few months ago and I told her about season 1. She's loving it so far. Can't wait for season 2!

I am a fan of the 1st season but with all the change and what happened with Onew s character change, I am not sure I Will watch it... such a dilemma ><

Havent watched first season yet. time to catch up.

"The writer, Park Yeon-seon, is a major draw for Age of Youth, as she has a very eclectic sensibility and a knack for creating cult hit dramas (like White Christmas, Mixed-up Investigative Agency, Alone in Love). The first season of Age of Youth was an unexpected mix of mystery and slice-of-life, and the series was praised for its relatable and realistic portrayal of youths. They struggled with jobs, college, boyfriends, and parents, all from the perspective of five very different young women.

Of course, at the heart of everything was the friendship that developed among the five girls. The trajectory from passive-aggressive roommate wars to eventual understanding, growth, and emotional support was genuinely touching (not to mention that the petty fights were hilariously realistic)."

Damn, those reasons are also mine and i think the best to watch this drama but objectively, it's also very true.
You don't get everyday the possibility to watch successfully pulled off inn k-dramaland, which is a universe clearly ruled by patriarcal values an misogyny, a drama centered only on female characters, depicting their honest and supportive friendship as they entered adulthood, instead of their competition and fights for male attention. It's about them as a persons, each with distinct needs and desires and as women with different goals and hope for their present lives and future.
A rare and unique kdrama, really a breath of fresh air.

I marathoned the Season 1 last weekend, just in time for this week's premiere of season 2. And hooray for more Song Ji Won story.. I adore her the most. I'm also curious how Ji Woo will take on a role that was previously acted by someone else, it's actually a challenge to let the viewers feel that (although with a different face), she's still the same Eun Jae.

Bring it on Show! I'm ready!

She was my favorite character and the one who held all the girls together with her sunny personality, so I’m thrilled that she’ll get a bigger storyline this year. Can’t wait!

I agree with you wholeheartedly, writer-nim !

I hope jinmyung get some kind of happy story line or at least not as bleak as first season. Because it was so hard to watch.

I'm probably the only one who hasn't seen Age of Youth! I kept planning on doing a marathon (thx Netflix!) so I can live watch season 2, but alas, life happened. Still excited for the Beanies though!

I haven't watched it either ? I've read the recaps though so I'm debating if I just want to go straight into watching season 2 or marathon the first season (and lose sleep in the process)

We're probably the only three who haven't watch the first season. I really doesn't has any excuse to postpone watching it tho... except I'm busy watching four currently airing dramas and 1N2D, got 8+ more on-hold dramas to finish and hundreds more on to-watch list, and stanning my oppas ??

Oh! Hey... maybe we could marathon together so that we could talk/discuss it as if we watch it live? You could read the recap and others comments but it is better if there's someone who respond to you, right?

@hikari_nmh Ooh this is actually a good idea! When do we start? ?

Is anybody else not really feeling the new actress playing Eunjae? I feel like her vibe doesn't really suit Eunjae. I'm hoping I'm wrong but I feel like I'm not really seeing her as Eunjae at all which is kind of killing my excitement for this second season tbh :/

bummed that it's only 12 eps but SO READY

Wow, she really is much taller!

Ah... the premiere is this weekend? Already? I haven't got to watch the first season. Oh, no..no.. This not the time to whine. Now, gotta off to watch them. ???

Ikr! I have literally set up camp on this Dramabeans Premier Watch page while I wait for Age of Youth Season 2. And any news, anything at all that is released just before the premier.

yeaaas ji won is my favourite ?

I'm watching solely for Kang unnie cameo!! She is my favorite!

All I want to know is Where Can I Freakin' Watch It?! None of the legal sites have it, and I don't understand whyyyyy.

I haven't found it anywhere that isn't a sketchy website. :-(

Also, throughout the first season, I had this sneaking suspicion that Ji Won's 'ghost'/lie was that she unintentionally made up a really bad lie about the girl who used to live in the house with them, and she couldn't fix the situation without admitting she made it all up, so she just never said or did anything about it hoping it would go away. Or maybe she didn't make up a lie about the other girl, but something she said ended up really getting away from her and causing a rift that resulted in the one girl leaving. That's how the show set her character up, as a girl with a healthy desire for validation of her identity, but who goes about getting it in a way that causes a lot of unintended problems. Hence the lie about the ghost. I kept waiting for that shoe to drop, for the drama to be like 'Here's Ji Won's lie and here's why she told it', but it never happened, and I've always been disappointed about that. I'm hoping this season is going to address that.