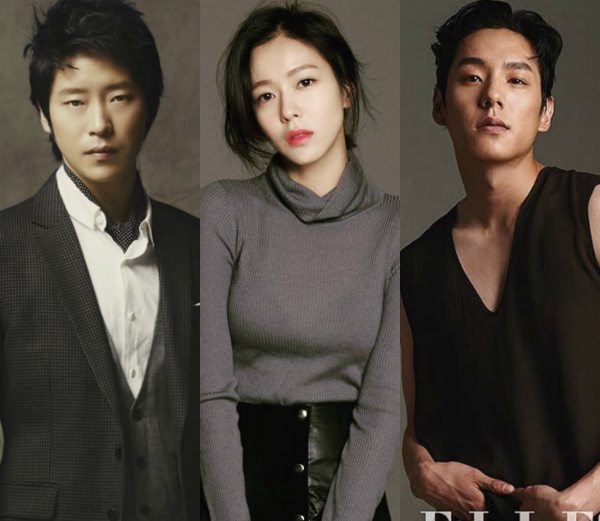 The latest casting additions for rom-com mystery thriller Four Men give us a better idea of where the plot is heading. Starring Park Hae-jin (Man to Man) and Nana (The Good Wife), this drama is about a female detective who lost the man she loved and fatefully meets a pair of twins who look exactly like him.

Nana will be the female detective, while Park Hae-jin plays both the twins, her lost love, and another mysterious identity. Eom Ki-joon (Defendant) has confirmed that he’ll be Park Hae-jin’s older brother in the drama.

Kwak Shi-yang (Chicago Typewriter) is set to play Nana’s sunbae in the police force. He graduated at the top of his class from the police academy, and is now an elite officer. He has infinite patience, a calm, collected personality, and book smarts; his only fault is that he’s a born klutz. Although he had an opportunity to climb the ladder on the intelligence or government career track, he chose the violent crimes department for the field experience, but his real interests lie elsewhere. He is the friend of one of Park Hae-jin’s identities.

Nana’s best friend will be played by Kyung Su-jin (Weightlifting Fairy Kim Bok-ju), who is a reporter who writes a column in the society pages of the newspaper. She has a fierce tenacity that drives her to dig into a story until she has a unique take on it, which ends up becoming a scoop that sells many papers. But the biggest scoop is this: She’s the hidden daughter of a chaebol family.

Kyung Su-jin and Kwak Shi-yang have worked together before in a cute little KBS miniseries about food, so I’m happy to see them reuniting here although I’m not sure if they’ll have a romance line this time around. Four Men is scheduled to air sometime in the early half of 2018 on SBS.

PHJ Oppa...*giggles*
Which other one could there be?
There is only one Oppa for me.

She was just being lazy and used 4 'a' rather than writing Oppa 4 times! It is official- YY is not dedicated to PHJ oppa! ;)

Ah yes... You are here too.
How can I forget about 4x oppa debate between you and @yyishere?

I just saw this article and mind went: "YY must be here..." Lo and behold, you're the one of comment section. *lol*
In my head you are the @mary (SJR) for anything related to PHJ.

Okay yes, I love me some Kwak Si-yang. Also, I've only ever seen Eom Ki-joon as the super adorable teacher Kang(that was his name, right?) in Dream High but as long as he's not evil, I'm going to be rally happy to see him again. He's been playing so many evil characters lately.

Watch Scent of a Woman.

Agreed. He is, however, good at any role he plays imho

Judging by the plot, he's passed on the right to play twins.

I just read that Eom.ki joon has not confirmed this offer

That awkward moment when you are looking forward to @azzo1's version of Four Men titled "Four Oppas and Azzo" rather than the actual show! ;)

Me, too! I was like, wait, isn't azzo the leading lady here? And the writer, director etc etc (name it, she's it)...*giggles*

She's so upset they left her name out, that's why she's conspicuously absent.

Anyway, I'm still all of those things you mentioned above, I'm not using my real name for the drama!
What denial? Who said that?! Fight me!

As long as Park haejin is in it,IM THERE, I LOVE ME SOME PARK HAEJIN

Park Hae Jin and Kwak Shi Yang in one drama! Sign me up!!!
I love that KSY is all playing someone who is perfect on paper but a born klutz. That can be comedic gold right there. Looking forward to seeing them both here. ????

I like everyone so much!!
Although I have to admit Kwak Shi Yang has been giving me the creeps in everything after watching him in Chicago Typewriter. Hopefully this role changes that.

Yes, he was so good being creepy in CT, looking forward to how he's going play this role, he sounds adorable already!

IKR, especially when He's actually such a cute kind and funny person!!
He's not the type that look sexy and cool when act as a psycho that you can hate and love at the same time like Namgoong min in Remember or Yoo ah in in Veteran. It's just totally creepy TT He played the role very well but I hope he'll never take a psycho role ever againTT

Okay so if this thing is still a prequel to Man to Man then I'm guessing that this 'other mysterious identity' is our boy K? Or...not? i don't even know at this point tbh.

Lol it's funny how hyped I was to see PHJ playing four different characters at first but the closer the drama gets the more my mind rebels against the plausibility of it. Like, twins are one thing, their random resemblance to the dead love is another, but having another random mystery dude look just like them too is kinda pushing the boundaries of my suspense of disbelief.

At this point I kinda wanna push for a 'quadruplets separated at birth' storyline, if only to help my brain make sense of things lol

Looks like I'll be busy early next year---watching dramas, that is!

This is an amazing cast, though. I still haven't finished man to man, waiting for my friend to start it so we can watch it together. But I think this will be better, honestly.

I forced myself to finish M×M, Oppa was great, his bromance with Woon-kwang was great too but the romance.. ?! It just didn't feel right!

Eom Ki-joon ?
One of my favorite stage actor who is just as fantastic on screen.
Yay for talents and a stable career off and on stage.

I just read twins and that got me interested as I have never dropped a 'ringer-doppelgänger-twins-lookalike-same person different time zone' drama ever!!! The plot doesn't even have to make sense at all...ha.

Lol same here.
He plays all kinds of heroic characters on stage ( D'Artagnan, Edmond Dantès, Robin Hood etc), so it's good to see the opposite on screen.

So, it's confirmed, Park Hae Jin really into unique (weird) story..
Dude, when will you take on a chessy, cliche, cozy, cheabol -and -candy kind of plot. Or just a simple, feel good romcom?

nana and kyung soojin should swap place imo. not that i dont like nana, but i think kyung soojin is a better suit for park haejin's acting.

I love the cast! I was hoping that Eom Ki-joon's character would be the bad guy here because he does it so so well, and I was looking forward to him going against my Oppa! But I still like how this whole thing sounds, fingers, toes and everything else crossed that this turns out to be great!

Ahh, PHJ's new drama... it almost slip on my mind.
I will definitely watch and become an avid reader of the recap in this site... and, enjoy reading every lovely banter, snark, sneer and smirk between @azzo1 and @yyishere. You two reminded me of @obsessedmuch and asmara in any SIG thread.

Lovely ladies as good company, how could I steer away from them?

Bring on the pretty!

No thanks. What kind of fake news smh- SidusHQ confirmed he's never received a script