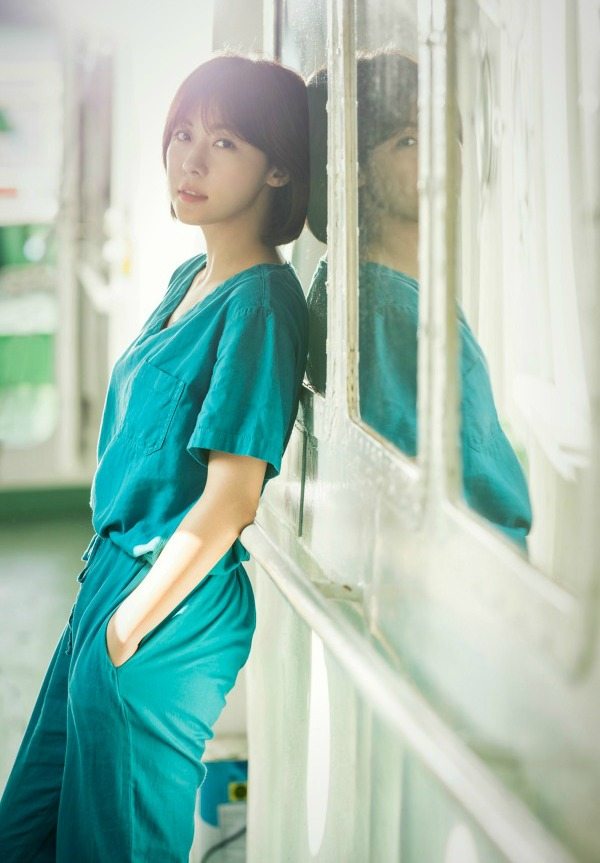 A whole bunch of stills for MBC’s new medical drama Hospital Ship have been released, giving us our first look at the band of baby-faced doctors who go from island to island to treat its inhabitants in need of medical attention. Most of these stills feature our two leads, Ha Ji-won (The Time I’ve Loved You) and Kang Min-hyuk (Entertainer), looking hard at work in their doctor’s coats, but we also get some very pretty character shots of the rest of the main cast.

Ha Ji-won will play surgeon Song Eun-jae, a no-nonsense type who has been the breadwinner for her family since she was young. She is described as “beautiful but cold” and has a hard time empathizing with people, and dealing with emotions in general. Sounds like the various encounters with the islands’ residents is just the thing she needs to tap into her warmer side. Or maybe it’ll be her fellow doctor Kwak Hyun, played by Kang Min-hyuk, who opens her up with his “warm spirit” and superb empathetic abilities. Of course the physician’s her diametric opposite; it’s like a law in dramaland.

They’ll be joined aboard the Hospital Ship by Kim Jae-gyul, a doctor of Oriental medicine played by Lee Seo-won (The Liar and His Lover), and Cha Joon-young, a dentist who will be portrayed by theater actor Kim In-shik. Girl group AOA’s Minah rounds out the cast as the bright nurse Yoo Ah-rim. Personally, I’m just thankful that Ha Ji-won doesn’t look too mature next to the rest of the cast, or at least it’s less jarring than I feared it would be, ‘cause they’re all quite a bit younger than she is (she was born in ‘78, and the rest are all ‘90s babies). Not sure how much of that is due to them looking sufficiently grown-up enough to be doctors, or if Ha Ji-won’s actually just found the fountain of youth. How is she almost forty?!

I’m quite excited to see how this unusual moving clinic setup will turn out, since taking doctors out of the hospital might get rid of those hospital politics I have zero patience for. I’m also hoping for some heartwarming interactions between the boat-bound medics and their islander patients, and especially how they’ll melt the ice queen surgeon’s heart. MBC’s Hospital Ship will take over Man Who Dies to Live on Wednesdays and Thursdays starting August 30. 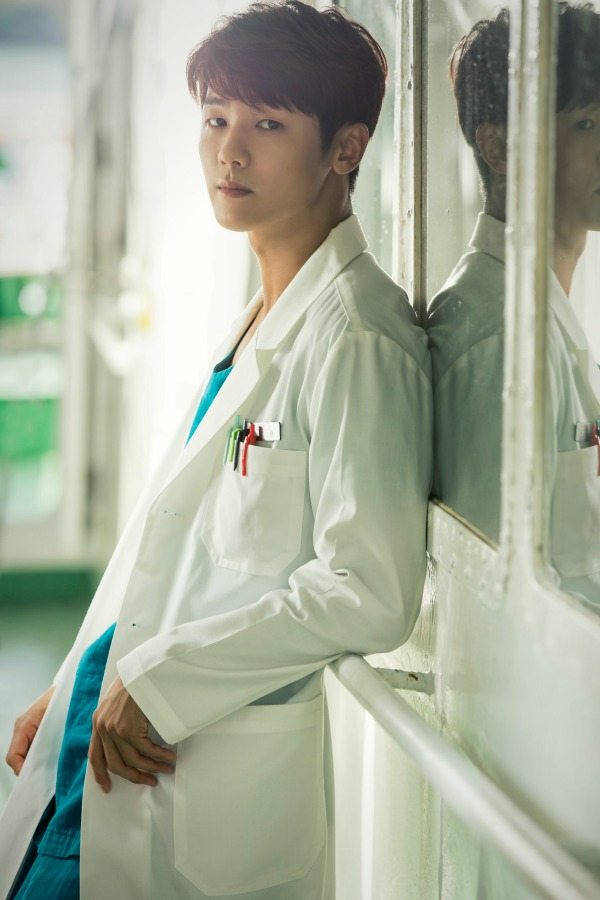 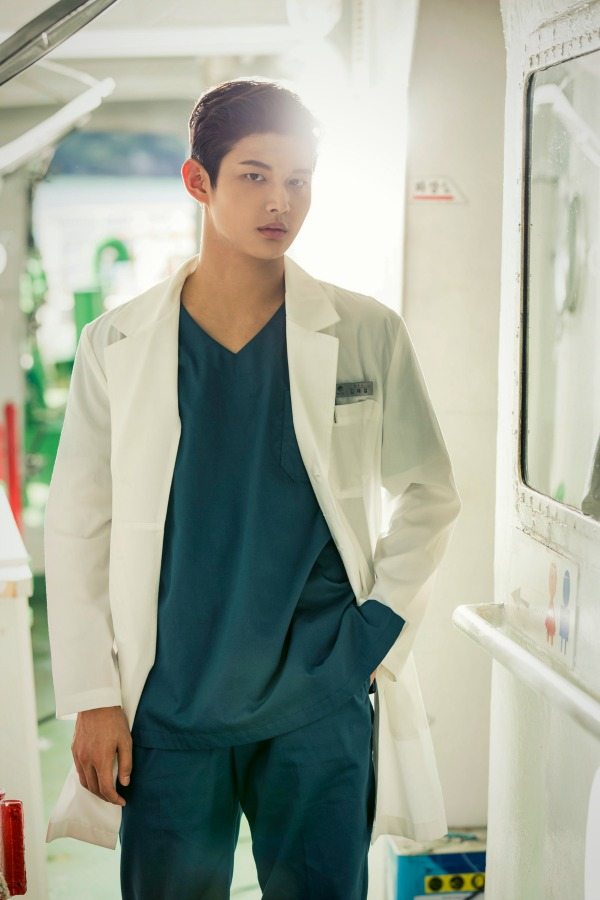 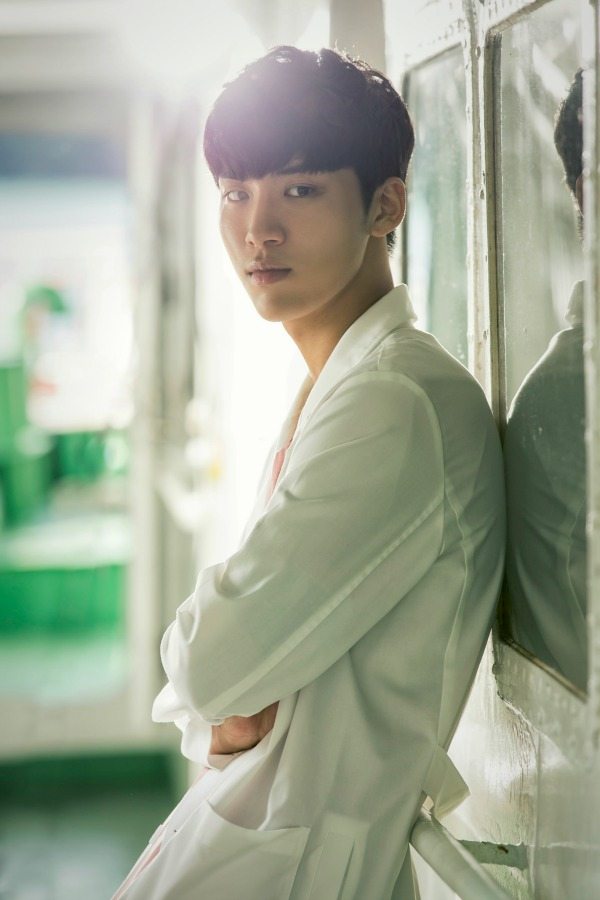 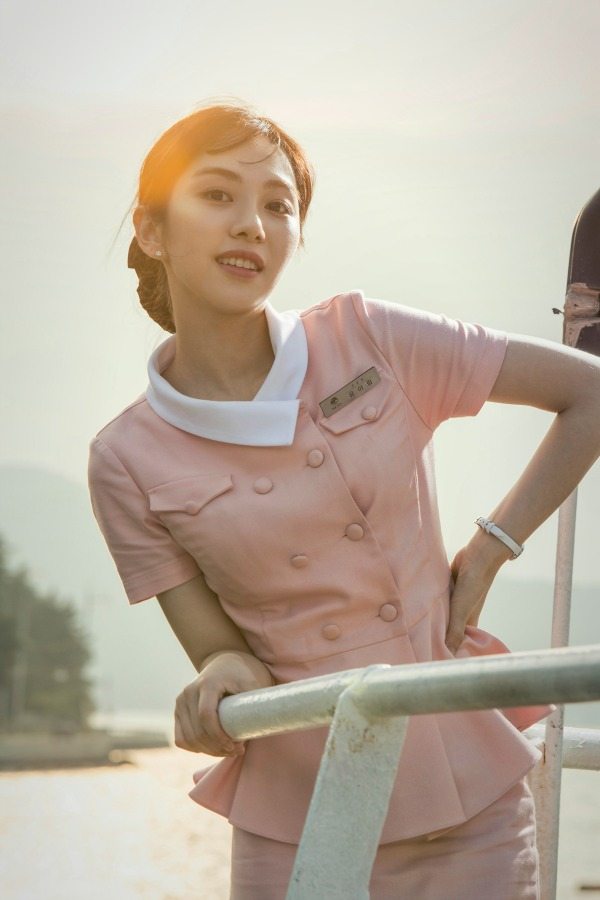 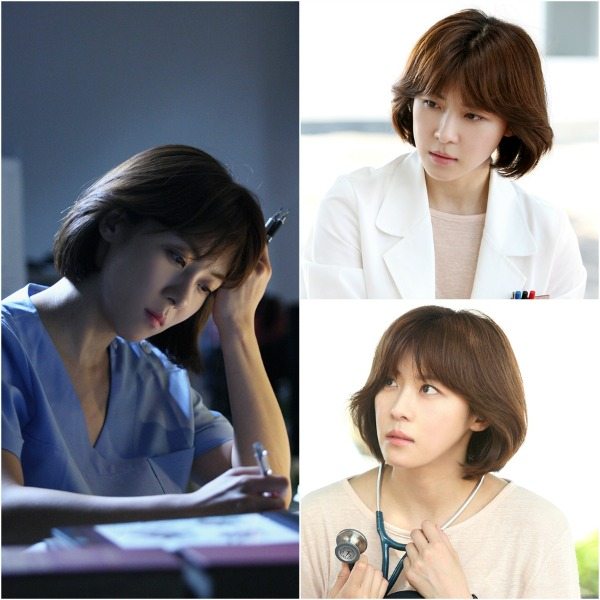 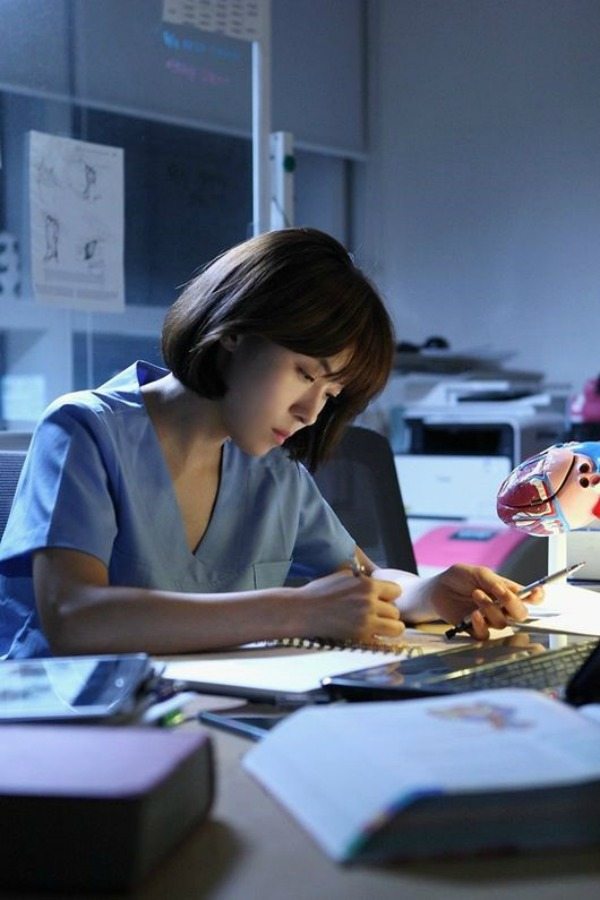 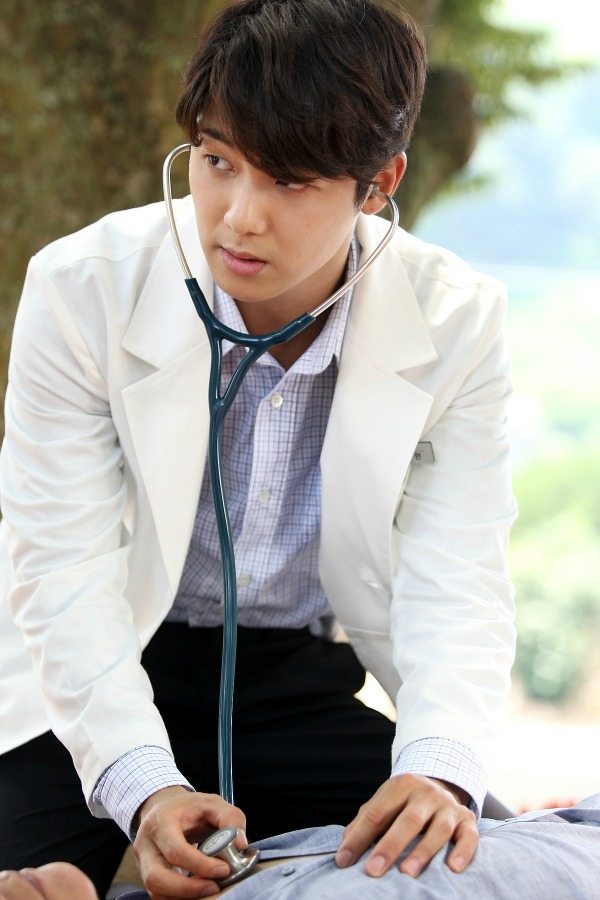 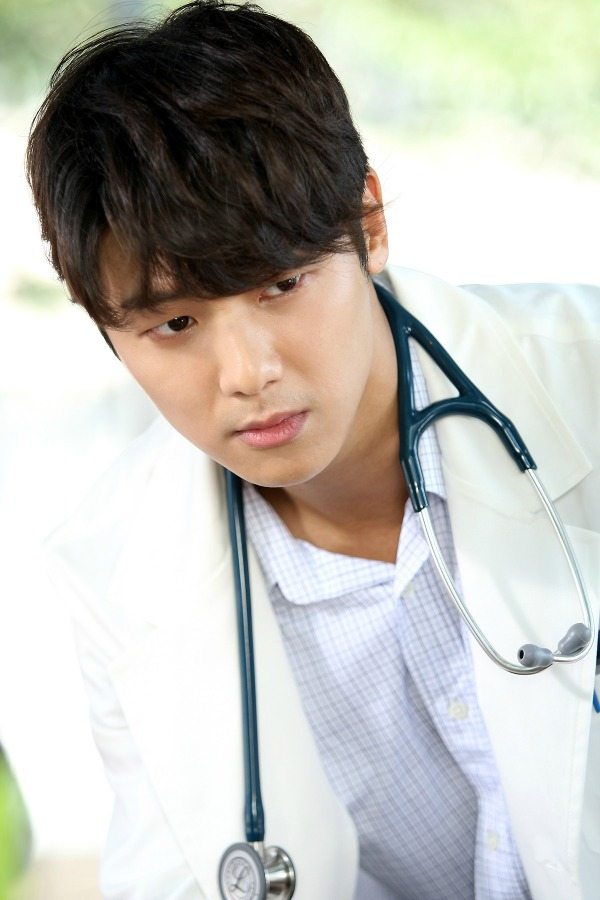 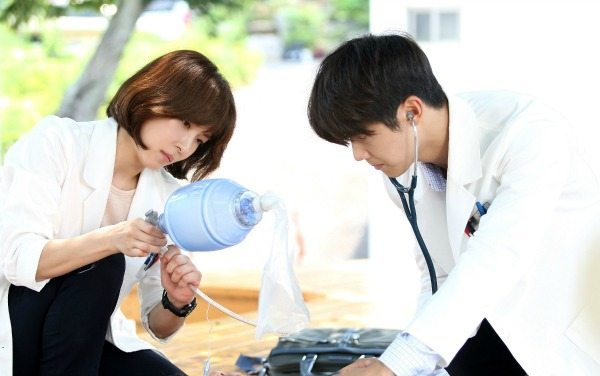 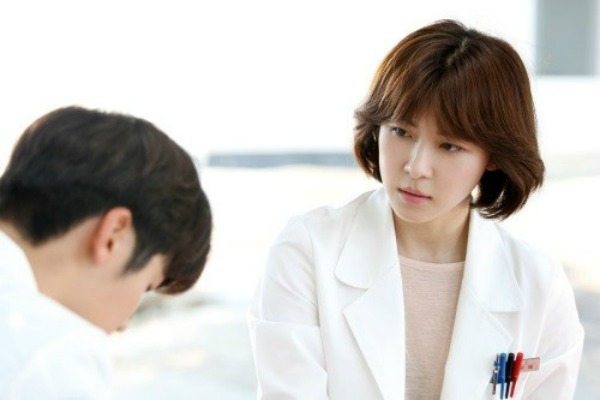 Still finding it hard to believe but still crossing my fingers and hoping this is a very good drama. It's been too long without Ha Ji-won.

He was about twelve wasn't he?

am i the only one who think that casts seems so good with gown?? they are suit their role really well in my eyes.hajiwon is super professional when minhyuk had a impressive acting in entertainor. i dont know about other casts but these two + refreshing story is enough for me to make me super excited for this drama

I agree. minhyuk looks quite mature in the gown and hair.
And just like you, as long as the leading two have chemistry and the story's good, I don't really care about the age gap.
It's been so long since I've seen my baby Minhyuk act (I passed on Entertainer because I can't stand Hyeri's acting) and since that post about Heartstrings on DB, I'm looking forward to this even more!

but i highly suggest you to watch entertainer.its warm drama by great acting from jisung.the drama is about jisung and minhyuk not hyeri and hyeri's role become more and more small by each eps. minhyuk showed impressive acting specially in last eps of this drama

That age gap with the cast is hilarious, and I still can't believe they cast these babies as doctors (speaking as someone who is a similarly aged baby).

I know HaJiWon still looks so impossible young and pretty but I still be more grateful if there is no love line here.

yes i agree with you
find it hard to accept love line between the casts ?

but from drama chart, this drama will have love line for sure..but maybe there is no focous on it, maybe more focous on human relationship .i dont know ...although i love this pairing and i praying for good and bold romance

when everyone are nagging for age gap , im here super happy to see this pairing. i,m big fan of noona romance and seeing this pairing with my fav actor and actress made me super happy.im just praying hard for good story line, then everything will be dreamlike for me.

Haha me too, I love noona romances, when it's done right of course. So hope this one doesn't disappoint.

I think it's less romantic age gap and more believing that such young actors (I hope they are actually playing much older than they really are) are medical doctors. Maybe Ha Ji-won is overseeing their residency and they are all newbies.

do you watched "i hear your voice"?? it was successful drama in both korea and internatonal.and their age gap was near 11 year in real life.in drama male cast was student when the female cast was lawyer. means huge age gap in both drama and real life.this drama is still on top of my fav drama and the drama success shows that others liked the drama too.so i personaly like this one too

much better than Yoo Ah In and Kim Hee Ae, eh? And both arent married is plus. I like noona romance when it is done right too.

i dont know why people have nt any problem when male cast looks exactly like father of female casts but when it comes to noona romance everyone keep nagging about this and that...such a double standard

I'll be checking it out for Ha Ji-won. I hole it won't be another The Time We Were In Love. But how come she never ages? She still has her baby face, which is so cute!

Still don't understand, why the PD or writer always pairing Hajiwon with young actor. At least we all know how charm she is. But she never dissapointment chemistry with her partner.

Haha weird thing to notice but those stethoscopes are from the Littman Cardiology series and are like 300 USD. Hot damn props department went all out.

Not a fan of medical drama, although I'm a doctor myself.
They should stop doing medical dramas, they were all cringey. So bye

Cant get over the overly done eyebrows of male actors. General in East Asian entertainment and here as well. Its really so off putting. That and their made up faces with lipsticks. I know girls, women there do like these looks in men, and even androgynous made up actors , stars but really its hard to even look at a picture and difficult to sit through a series at that.
And the female lead is giving out Romantic Dr T Kim vibes here. Not good, not good.

I think the age difference isn't as noticeable when I see everyone in character. The young ones look sufficiently mature and yes, Ha Ji-won HAS found the fountain of youth. This show wasn't on my radar but seeing everyone in character has made me look forward to this show. (And please, no hospital politics because they are mind-numbingly boring.)

Lol this is the kinda post that would have attracted downvoters! I kinda miss the random downvotes which lead to all those discussions about unfair downvotes and cowards and what not :P

Lee Seo Won is looking quite mature for his age here (is he really just 20!) and Kang Min Hyuk- hot damn!
Plus Ha Ji Won looks in her late 20s rather than late 30s!
So I guess it seems to be working?

yes it looks like it could def work. i dont feel eww factor from these pictures.

OK, I'm sold..ha ji won eonni doesn't look a day over 30..as long as she doest have to act cute then I'll watch this even if I hate medical dramas..
Please let her be a smart and capable woman who can maintain her dignity even if (IF!) she have to romance a younger man..

yes. i love her to be immersed in what she does best than throwing aegyos.

He is wearing the steth WRONG. LOL.

The cast look like youngsters. They need more veteran actors to balance it!

no hospital politics, you say? Count me in then!!!

OMG, Hajiwon seems never age. She look so cute with short hair. For fan who say the age gap so ridiculous look at this. Even Kangminhyuk and leeseowon look so mature.

on one hand, looking forward to a non-seoul centric drama. I really hope we can get an insight to the life of the people on the islands! But still not sure about this casting...

wah, what happened to the earlier hints that Choi Jin Hyuk was considering this drama?
: (

I know. :( I was bummed about that, too. I was so ready to see him in scrubs and a doctor's gown and basically be a big ol' softie and kind and warmhearted doc, but I guess he turned down the offer since they were courting him to star alongside Ha Ji-won...

I just remembered Choi Jin-hyuk was in Emergency Couple, so I guess there's always that if I wanna see him in scrubs. Ha.

Ha Ji-won anything , that's all you need

Ha Ji-won looks SO GOOD in those green scrubs in the first pic! And so does the rest of the cast, really. I like the mature vibes the two male leads are giving off on the pictures, alone, so now I'm just gonna hope that their acting will be on par, too.