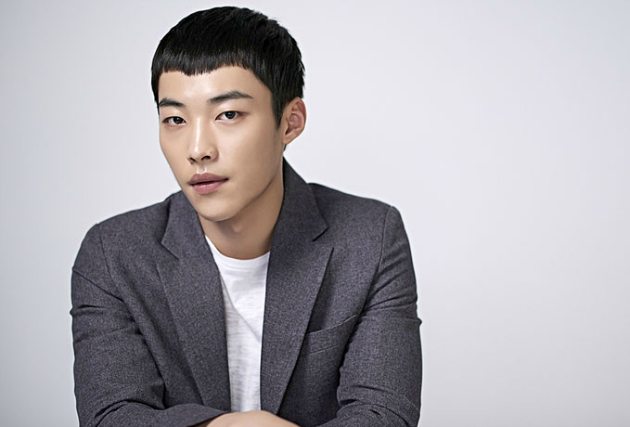 Oh, I like this much better. Perhaps those in charge of casting at Mad Dog have realized that going from a capricious, hair-color-changing deity to a genius professor was going to be a hard sell to viewers, because Gong Myung (Bride of the Water God 2017) seems to be out of the running, and the production is now courting Woo Do-hwan (Rescue Me) for the role of a human brain expert instead.

Mad Dog is the upcoming KBS drama about a team of investigators of the same name, who hunt and bring justice upon scammers—specifically criminals who take basic schemes and copy and expand upon them in order to defraud insurance companies out of large sums of money. Yoo Ji-tae (The Good Wife) is still being wooed to play the team lead, and Ryu Hwa-young (Father Is Strange) is also in talks to play a sultry and badass team member.

Professor Kim, the team member role being offered to Woo, was previously billed as another starring role, but in current reports the description has been tamped down a bit, with less discussion of the professor’s numerous degrees and an interesting additional tidbit that the handsome young genius who’s able to solve mysteries that stump even veteran detectives was a former con himself.

I missed The Man Living in Our House and had to go catch up on Rescue Me to write about Woo, but he’s really been doing a phenomenal job as Dong-chul, the heart-tugging biker youth who has an alcoholic father but who’s ever the loyal friend and doting grandson. I think he’d be a great addition to the Mad Dog team, and he’s got a couple of years on Gong Myung, which helps add to the character’s scholarly credibility.

I’m a sucker for Scooby team shenanigans, a sucker for anything with Yoo Ji-tae, and I’d really look forward to the synergies that Woo, Yoo and Ryu Hwa-young could cook up, so my fingers are crossed all three will come on board. Mad Dog will take the spot vacated by Manhole on KBS on Wednesdays and Thursdays beginning in October.

Thank the Drama Gods! Gong Myung can stick to puppy roles for now but Woo Do Hwan seems a much better fit for the tone of the Drama and Yoo Ji Tae

When The Man Living in Our House was airing, he didn't appear too often in the drama but he captured the interest of the viewers when he did. I remember thinking that he was someone to keep an eye out for in the future. I think he'll do well in this new drama.

All I remember from his character in man living in our house is him going 'Oy Ko Nan Gil' yet he still stood out. He also resembles seo kang joon a bit

Woo Do Hwan is a much better actor than Seo Kang Joon though he looks a little like him.

He is currently doing a great job in OCN drama Save Me.

Yeh I know I'm currently loving him in save me

Same! He gave a flat nothing character spark and humanity. So glad he's getting bigger roles and opportunities now.

Yay! Watching Rescue Me, I have a feeling Woo Do-hwan is going to find a way onto my list of actors who I watch all available work from!

YES! And this is how I feel about Strongest Deliveryman's Kim Sun-ho! <3

Yup, these two + Kim Jung-hyun are my favorite things right now. Can't wait to see what they do in the future.

Yesss, make noona proud! Now I can watch 'rescue me' without getting scared about him getting killed any minute or whatever. :D
I hope he gets to be a lead someday. He can definitely act, unlike some idols that are roaming in the industry, cough.*

I mainlined all 4 episodes of Rescue Me last night instead of sleeping or being productive and I'm officially a fan. Excited to see him getting more work-- Woo Do Hwan is so good I had to pause and see what else he's been in. Surprisingly, not much. Glad we're fixing that ?

*can't do math, realizes that it's only a four year difference*
*flies to Korea*

LOL, may y I join you? And then have to kill you and dumb your body in the Han river (wouldn't be a true drama without its caneo. It needs the work seeing as subway is the new it star) so I can have him all to myself.

you'd be the new Song-Song couple <3

@awcoconuts, stop being the nicest person ever! *planning wedding with Woo Do-hwan, you are invited*

I feel quite lucky that I can legitimately calling almost all of recent rising stars (Kim Jung Hyun, Jang Dong Yoon, Yang Se Jong, Woo Do Hwan) as Oppa with being only 1-3 year(s) younger than them :)

Yeah, yeah; keep rubbing it in. This ahjumma is a fan!

Hehe.. I'm sorry @rentenmann :) tbh, age is not something to be proud of when it comes to fangirling. I have some Oppasaengs on my list too..

YAY! Woo Do Hwan is definitely an up and coming force to be reckoned with!

Is his character a badass, too ? From playing a badass gangster to badass high schooler to badass professor genius ?

But, seriously, he mixes badass and being vulnerable so well ! It makes me swoon.....

I think they finally got it right for casting a young genius in crime investigation. We don't need another Lee Han (Criminal Minds) and I've got a hunch that Gong Myung would just be another Go Yoon. Criminal Minds is trying so hard to sell the bromance between LJK and GY, it screams fake.

If Yoo Ji Tae and Woo Do Hwan are in, I will be absolutely stoked to see the pairing. Woo Do Hwan may be young but I can see him measuring up to his older, more experienced co-star.

I'm not watching Save Me, but even from screenshots and the teasers I saw, his screen presence is so stunning it's practically flowing out of my laptop. Glad he's getting courted for more projects already!

I hope he takes the role. He is captivating as the trope-y but still he adds layers, heart breaking Dong Cheol in 'Save Me'. He and the fierce played by doing awesome work Seo Yi Ji (as well as the adult cast) make the drama for me. He has potential chungmuro rising star written all over him. I hope he takes this so I can get weekly does of him and that it leads to more work down the line.

Yes yes yes *happy dance* I approve of this

Oh I am so onboard with this casting. I loved him in Man Living In Our House. His character could have been flat but he made him so human and even sympathetic. I would definitely like to see him in Mad Dog. I hope everyone takes the role being offered to them.

The writer finally realized the genius specs were too much to be taken seriously. Woo Do Hwan as a genius and a con next to Yoo Ji Tae ? Bring it on ! I'm ready to see two sexy men on my screen.

I love him in Rescue Me. Already sad he will be there for the lead girl and won't win her heart :( I hope he gets more roles.

Unrelated to this article but he looks like Kim Woo Bin. And the youngest sister in Father is Strange looks like Park Shin Hye. I wish Korean actors/actresses would stop getting plastic surgery. Every other actor or actress looks similar, it's freaky.

whaaaat? he looks nothing like kim woo bin except maybe the monolids.

not denying that korean celebs get a lot of plastic surgery, but just because people look similar, doesn't mean they necessarily got surgery. PSH for one has never gotten plastic surgery, i think.

idk, as far as actors/actresses go, i see a lot of variety in their looks. when it gets to idol territory is when they start looking a lot more similar.

Aww.. I love him in Rescue Me. The scene from episode 4 where he broods in front of the mirror in the bathroom.. Dongchul-ah, I know you're sad, but you look soo good brooding. <3

Woo Do-hwan made the most of his minor role as Ko Nan-gil's successor as chief loan shark enforcer in SWEET STRANGER AND ME / MAN LIVING IN OUR HOUSE. There were many happy campers on the recap threads when he got a well-deserved redemptive arc. IIRC, he ended up joining the ManDoods after doing his time.

I'm sorry to see Gong Myung go. I loved his performances in Drinking Solo and Bride of the Water God. The boy has loads of talent, even though he's not as popular; but I've absolutely fallen in love with Woo Do Han in Rescue Me. He brings the right amount of gravitas and intensity to his role. He didn't quite catch my attemotion in Man Living in Our House, but now that he has, I can't quite take my attention off him. Looking forward to this.

He's really impressed me. Good for him!

May this happen, as a small consolation for all the guys off to military service this year. Too many have gone this year! Cone back safe and soon, and good luck to everyone!

Oooh good. I really am impressed with him only after 4 eps of Rescue Me (aka Save Me). While I've seen him in the Man Living in Our House, I didn't take as much notice as in this current role I am watching. I am excited to watch him in something right away in 2017 again.

This young man has certainly made a strong impression. Looking forward to it.

Thank you for what you told about this beautiful film. Interesting that he will talk about scientists and I think that the plot will be very interesting. I will even watch it one of the first because I will have time. I will give all my studies at disposal to https://edubirdie.com/argumentative-essay-writing-service, which is an argumentative essay writing service. So I advise you to do the same and watch a wonderful movie.