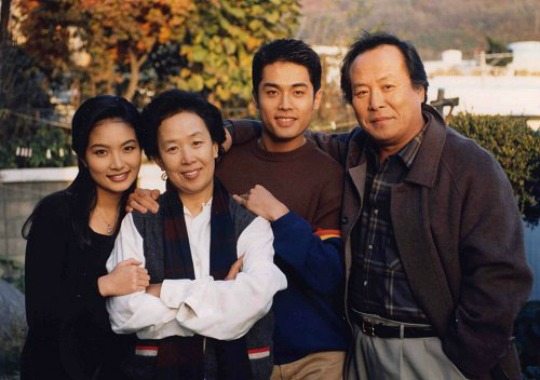 We’ve got another remake in the works, though this time, it’s not a webtoon or a foreign show but a ’90s Korean drama that’s getting the modern treatment. MBC is currently negotiating with writer Noh Hee-kyung to remake her 1996 drama The Most Beautiful Goodbye in the World, which was also the project to launch her to fame as a writer.

The original drama, which was a 4-episode show, starred Na Mun-hee (Dear My Friends), Joo Hyun (Romantic Doctor Teacher Kim), Kim Young-ok (Shopping King Louis), and Lee Min-young (Strongest Deliveryman) in a story about a middle-aged wife and mother diagnosed with terminal cancer. The family that she’s been devoted to her whole adult life will come together for the first time and finally learn to appreciate her love for them, which they had always taken for granted. Dang, just writing those sentences makes me want to tear up; I might end up a blubbering mess if I actually watch it.

This project sounds like a very personal one for Noh Hee-kyung, not only for its success early on in her career—the show won the Daesang and Best Drama trophies at the 1997 Baeksang Arts Awards, and has been adapted into a novel, stage play, and film—but also because it was written as a tribute to her own mother, who passed away in 1994. I didn’t watch the 1996 show nor its subsequent adaptations, but it’ll be interesting to see whether they keep the short episode count and also who they cast in this, especially as the mom.

The show is still in its very early stages and MBC is still in talks with Noh Hee-kyung over whether they’ll even go ahead with the remake, but hopefully we see some progress soon, in time for maybe a late winter premiere. Maybe by that time I might have the urge to get my heart ripped out of my chest, who knows.

Tags: Noh Hee-kyung, remakes, The Most Beautiful Goodbye in the World

The ode to her mother portion clicks everything into place... as to why the hurt from her writing doesn't come off as insensible or manufactured.

Is it too much to ask her to have a soft comeback this year with this project before 2018's Live? Pretty please.

I definitely have a soft spot for NHK's dramas :') Will be on the lookout for this remake!

I hope they don't needlessly bloat the story in order to have a fuller episode count.

Since it's a personal memory, it will be harder to have a remake now I think.

Oof. This sounds like a cry fest, for sure. I like the fact that the original's only four episodes, though. Might have to check it out. I wonder if I can find it subbed, though. I wonder how this remake will turn out and how different it'll be from the original.

Btw, totally thought that was Hyun Bin up there.

"...but it’ll be interesting to see whether they keep the short episode count and also who they cast in this, especially as the mom."
Is it weird that I immediately searched how old Na Munhee was when she played this and found actresses with the same age in 2017. I didn't regret it since I found Son Yejin, Lee Yuri, and Kim Ahjoong. I think wouldn't it be nice seeing Son Yejin on drama again? I mean Kim Namgil is back. Though I don't know if she could actually pull angsty mom

She would definitely nail the melodrama.

This is going to be a cry fest! I never watched the original since it is in 90s so it is quite difficult to find it with sub imo. But will try to search for it. If the remake is going to happen, I hope it is still short epi, maybe the longest should be 10 epi. Anyway, this projects sounds good for Kim Hyun Joo's comeback though.

I don't think the original is anywhere online. You could try watching the 2011 film adaptation, "The Late Blossom" instead if you wanted to. It has a great cast and it got good reviews. It is subbed.

I mean "The Last Blossom."

I recognise two of the four of them - and I've seen the shows that this post says they were in.
I actually looked up Noh Hee-kyung recently, so I knew a little about the original. I personally don't think I could handle the tragedy, but considering the original is what made Noh what she is now, I think people will eat up an adaptation.