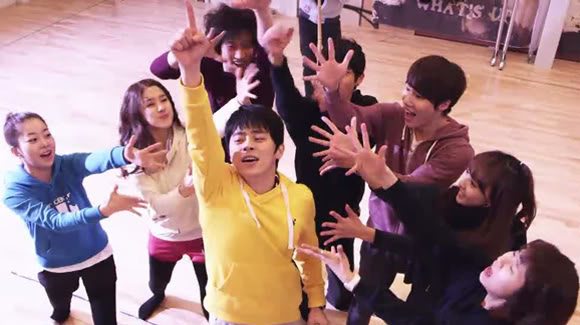 I agree with Gene Kelly when he stated that music and musical numbers should push the story forward and should say something about the characters. OSTs and musical performances grab my heart most when they not only elevate the emotion in the scene, but they also tell me more about the characters than any dialogue could ever do.

Who would Ha Do-sung be without his “This Is the Moment” performance in What’s Up? How would we know the depth of Lee Min-suk’s feelings for Jung Soo-young in High School King of Savvy without Seo In-guk’s “Finding Myself” playing in the background? Would Healer and Chae Young-shin’s kisses have had such an emotional impact without the gentle crescendo of Ben’s “You”?

When I first started watching K-dramas, it would drive me half-crazy that subbers would never translate the song playing in the background. I could tell from the placement of the song or the emotion of the singer’s voice that the lyrics had a direct relation to what was happening in the scene, but I didn’t know what the connection was exactly without knowing Korean. So I was immensely grateful when subbers started to translate the songs. It was then that I felt the OST could step out from the background and contribute to the story, to the acting, and to the scene as a whole.

I love that K-dramas fully utilize their soundtracks. There is power behind developing unique songs for every show. Artists are able to create lyrics and concepts to directly correlate with the story. And when done right, you remember the emotional impact—like the way Ben’s “You” slowly crescendos before Healer and Young-shin kiss. The song is an emotional summary of their romance: They could not be in each other’s presence, but they loved each other regardless. When they are finally both in the same place at the same time, the song is a testament to how much they endured until they got to this moment.

When done poorly, an OST can take you out of the moment too—you want to mute the sound before you hear “Almost Paradise” one more time. Granted, based on the lyrics alone, you could argue that the song is just as relevant as “You,” but lyrics are not everything. “You” was so emotionally tied to what I saw on the screen that I never got sick of the song. In contrast, “Almost Paradise” was used so superfluously that after the tenth time, what emotional impact it may have had at the beginning was completely lost halfway through the show.

The songs in the background are not the only songs that get to me. I love musical dramas that utilize their framing to stage performances that push the characters further along and drive their character development. We’ve seen that framework used effectively in a number of ways, like following a ragtag band of lost boys (Shut Up: Flower Boy Band), a group of musical theater majors trying to figure out what their future holds (What’s Up), or a bratty high school girl learning how to empathize with those around her and finding her dream (Dream High).

What’s Up, “This Is the Moment”

My favorite of these is Daesung’s wonderful performance of “This Is the Moment” at the beginning of What’s Up. The performance is not just about his amazing voice. In fact, he can barely eke out the words at the beginning. It’s not until he truly loses himself in the song that he’s able to shed his insecurities and go all out. We immediately know that he lacks confidence, and we’re made to wonder why with such an amazing voice, and we realize that finding the confidence to sing must be this character’s journey, all because of a 2-minute performance.

For me, music plays an important part in telling the story in a different way than how visuals and dialogue tell it. When done right, the songs and performances compliment the plot movement and tell us something new about the characters, and the emotional impact stays with us. When done wrong… well, we quickly move on before we get the song stuck in our heads. 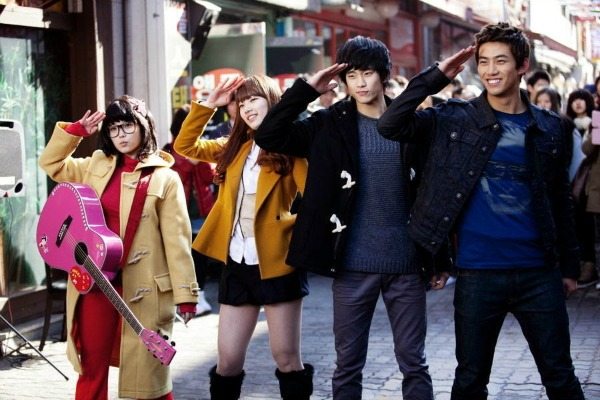 What's Up was my favorite musical drama. I tend to rewatch it every year because I miss their songs and it is my entry pass in musicals. The songs used tells me their inner self. I love all the elements in this drama. Lastly, I really wish the writers can make a reunion with complete cast.

Ditto! Great to see the cast went on to be bigger and brighter stars on their own like Jo Chun Seok, Kim Yi Won though I am yet but still waiting patiently for the two Ims - Im Jung Huang and Im Ju Eun - to get their star turns.

"I love that K-dramas fully utilize their soundtracks."

That. That right there. It changes the whole viewing experience.

And you make me want to rewatch What's Up!

I was never able to finish What's Up, I don't know why. I still hope for the day when Im Joo-eun and Jo Jung-seok would be on the same screen at the same time again. I shipped them in that show. I loved the musical interludes and I loved the theme of finding oneself the show portrayed, however Kim Ji-won's character annoyed me so much I couldn't continue. She also looked very babyfaced opposite Im Joo-hwan, and that made me somewhat uncomfortable.

Remember the sparkly music they played in Cinderella and the Four Knights whenever something remotely romantic happens? I sure do.

Hah, sorry, irrelevent. I feel the same way about lyrics being translated by subbers - I was glad when the subber did so for Cinderella's Sister with 'It Has to Be You', because it made the scene so much better.

I still have "You" in my phone til this date and every time I hear it I get hit with the feels! I love it so much.

I always thought Almost Paradise was really more for the comedic effect, though. Especially with the slow motion walking in and all that. It seemed pretty lighthearted and appropriate for certain moments like when they were enjoying themselves on a beach holiday (if I recall correctly!). It never had any huge emotional impact on me, unfortunately!

"You" reminds me of the rooftop kiss scene & the hidden lair of Healer where the couple united :-)
And despite its popularity, dream high never grew on me... :-/

No kidding. I started crying as soon as I played Ben's You. I keep on saying this but music is our memories. They bring about emotions from days gone. Can't believe it's been a while since Healer aired.

If I like dramas it's because of their OST.

I was disapointed that the OST of What's up was not famous and be found... I like the one that Jo Jung Suk and Kim Ji Wong sang together (but in the scene they didn't sing togetger ). Jo Jung Suk has such a great voice !

This got me to go check out of King of High School Savvy, and it's really fun! I was shocked there was a good Seo In Guk show I hadn't seen! (Although it's a little sad how well being a high school hockey ace translates into being a good businessman. No wonder women have such a hard time making it in the business world.) I also want to check out What's Up.

What a great post! Thanks for sharing!!! :) My every day can go really gloomy from Lush's "Love" from Mirror of the Witch to the beautiful background music of She Was Pretty that can lighten up your mood in an instant going to Seo In Guk's "Flower" from Tomorrow With You again and back to Yael Meyer's "No Matter How Hard I Try" of Seven Day Queen. It's not just about the song but all the feels I had when I heard it in the shows that captured my heart. ♥

daesung's This is the Moment still gives me CHILLS, it was sooo good! became an immediate fan of his and also Big Bang.

I feel like Monstar is a good example of this - the scene when Scattered Days was sung is made even sadder due to the OST.

Only 15 comments on this? This was so well-written and composed. And yes, I love that now translators are adding in lyrics to the subtitles. No doubt it makes their jobs more difficult, but it makes our viewing experience that much more awesome.

I'm not a fan of OSTs, more often than not, they are too sentimental for me and one time, I can't remember what drama it was if you put a gun to my head, I watched action drama and in the action scenes, they played the drama's main song - very sentimental love song. Such a waste of potential. But I must say they are getting better lately.