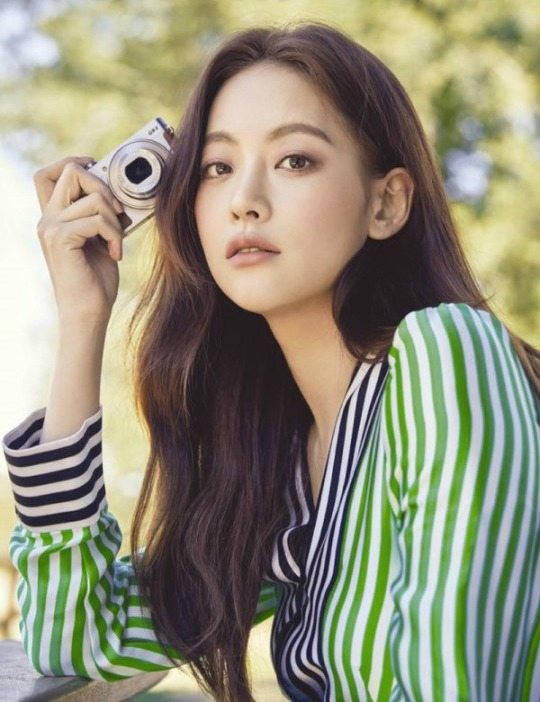 The sky’s the limit for the comedic potential of this pairing if it happens: Oh Yeon-seo (My Sassy Girl) is considering an offer to star in the new Hong sisters fantasy romance drama Hwayugi opposite Lee Seung-gi (You’re All Surrounded), who is up for the leading role. The new tvN series is a contemporary reworking of the classic Chinese novel Journey to the West with a fanciful romance twist.

The horror-fantasy-romance is set in modern-day Seoul, which happens to be filled with darkness and evil spirits. The heroine was born with a monk’s calling to rid the world of these demons, and her life will take on an extraordinary and supernatural dynamic when she crosses paths with the hero, Sun Wukong the Monkey King. The Monkey King is a mischievous minor god who’s been exiled to the human realm because of his pride. The two characters will bicker and butt heads, but they’ll team up to fight the dark forces and end up falling in love.

Cha Seung-won is considering an offer to costar as the Bull Demon King, and in recent casting reports, it says he’ll be at odds with the hero. That could make him anything from a villain to one half of a reluctant bromantic pairing (remember You’re All Surrounded?), so we’ll have to wait and see what shape his character takes on.

I like Oh Yeon-seo’s spunky comic style, which I can already picture opposite Lee Seung-gi’s. My Sassy Girl was certainly over-the-top as a show on the whole, but she was completely committed to going for the laughs. I still think Come Back, Ajusshi was her best, where she played a woman possessed by the ghost of an ajusshi gangster; she was pee-your-pants funny in that. With this casting, I’m expecting wacky, outlandish humor from Hwayugi now, so I hope that’s what’s in store!

Hwayugi is planning to air in tvN’s weekend slot this December.

I hope Seung-gi accepts this offer as his dramaland comeback from military. But before that, I hope Na PD kidnaps him first for a 5th season of New Journey to the West.

And then his reunion with Lee Seo Jin on an Ajusshi Over Flowers / 1N2D special, where LSJ is the ajusshi and Seung Gi is one of 3 flower boys competing for LSJ's approval. (But of course he's so difficult, that with a little NaPD prodding, all the flower boys end up ganging up against him.)

Let's just have Seung-gi guest in 3 Meals a Day for a reunion with Lee Seo-jin Ahjussi. Can you imagine Seung-gi wanting to cook something elaborate and be obsessed with his idea like every time he cooks for 1n2d and NJTTW.

I love all the cast..

Omg, I forgot that Lee Seung Gi will be back this year ! Last time I saw him was in You're Surrounded. I think I will have to watch his comeback drama, welcome back Mr. Dimple !

Dimply OYS sent of Mr. Dimples Joo won to army and now she she welcomes another Mr. Dimples LSG. Another dimply-overload drama. ? Now Hong Sisters you've had plenty of rest so please get your act together and we'd all be happy campers.

Pass for me. Her latest drama with Joo Won wasnt so good.

Yes that drama made me kind of dislike her

Haven't seen her previous roles, but I have to agree with your comment. MSG wasn't very well executed and that left me with quite a bit bad impression of her. Hopefully that'll change soon in the future.

God, I thought I was the only one......post sassy girl, I don't find her that good anymore. So, pass for me too unless the reviews are great.

But Cha Seung-won needs to decline and try to get a lead role in another drama. This man's talents are being wasted. I mean, you have a bunch of crap actors getting lead roles these days, while he's been relegated to supporting roles.

I so agree. I'm so tired watching idols getting lead roles while experienced actors relegated to secondary roles.

actually it would be a JOY to see Cha Seung Won playing opposite Lee Seung Gi again -- these two have an amazing chemistry and banter, they are always a riot!

9 gadis is camping in the cells village (again)

Oohh... I like this casting. Just please, please write a good story, Hong sisters. We need your mojo back.

this sounds super fun, i am going to LOVE this pairing!! it's been a long time since we've seen Seung Gi....

It's sounds kinda on the same vein as Master's Sun where GHJ rids of ghosts, in this case demons. I dunno about any Monkey King. I only know Tarzan lol. Must be some Korean folklore? Anyhoo I'm in since its a fantasy drama afterall. OYS was super adorbs in MSG. (Don't care if ppl call her over-the-top but the plot was def m-e-h.) And don't even get me started on LSG. I super miss this boy! ? Cross fingers there'll be some cute antics like the demon-calling by LSG Tarzan-yelling or something to that effect ?

This story is based on a classic Chinese fantasy novel, Journey to the West, with a monk and three monsters (the Monkey King is one of them) as the main characters. The novel has many drama and movie adaptations in Chinese language, and there are several J-dramas based on it too. The Monkey King is definitely not Tarzan like because he's half human half beast.

I love her! She has that spunky comic style, which some people dislike it. But just like Seo Hyun-jin, I wish she also can do another role/genre, instead of romcom, I want to see her in a more serious and heavier role because she is capable to do that.

Yes I did. That's why I knew she is capable to do heavier role. Romcom is just a piece of cake for her, except if the role is quite complicated.

"I still think Come Back, Ajusshi was her best"

I can't wait to watch it...they are both cute in their own rights

I really like Oh Yeon-seo (but not in My Sassy Girl), and I want to see her back on screen in something good and interesting, so I hope she takes this one. I also hope the execution of the show, if she does take it, doesn't fall short.

I'm not quite sure how I feel about this pairing.

I'm unenthused. I've never been crazy about Oh Yeon Seo's acting, and somehow I don't think she and LSG would play well off each other visually or chemistry-wise. The casting mess with My Sassy Girl also left a sour taste. I'd prefer someone with more subtle comedic style—a LSG reunion with Moon Chae Won would have been amazing, for example.

Love Moon Chae Won but her acting got worse..
Didn't like her in that movie with Seung Gi, Black, and now CM
She is in a slump

Love Forecast was cute! It was the writing that was predictable. Love MCW! ❤

Moon Chae-won is at her best in meatier role especially in sageuk. I don't like her so much in romcom genre. I believe her re-discovery role gonna be a sageuk role.

I vote for Park Eun-Bin

I've only ever seen her in Come Back, Ajusshi but I liked her there and I love Lee Seung-gi, so if he's signing on then I'll be watching this!

MSG writing was quite bad but JooWon and her did a good job. They make a super cute couple in that drama
She basically has chemistry with everyone so i'm looking forward to this fresh pairing..

Man if this works out, OYS is on a roll lmao Joowon-Park Hae Jin-Lee Seung Gi

Agree. Without them, no one would even watch MSG. It's pretty sad if their acting especially Oh Yeon-seo was judged based on MSG's performance alone, when she was good in other drama. I remember some fans blamed her for no chemistry with Joo-won in MSG when it supposedly to be both actors' task to create their chemistry (while in my case I felt their chemistry though). Maybe some of the dislikes because she got to act with some favourite oppas.

Ah My Sassy Girl! I enjoyed the madness but the story not much. It wasn't ambitious so there weren't huge glaring plotholes but it's so thin and stretched that it left much to be desired.

If it weren't for Joo Won and Oh Yeo Seo, I am pretty sure the show would tank below 5%.

I can't even decide if they have chemistry because the romance was contrived. The chemistry was better when they were at loggerheads, LOL.

Sounds like it could be fun. But after the debacle of modernizing another historical fantasy, Bride of the Water God, I am very wary of this.

What is Korea's obsession with modernizing these things?

It's not like they have a choice. They don't have the budget to do fantasy given the amount of CGI it requires.

Oh!!! Can't wait, love oh yeon seo in CBM. Love the pair,I will watch if not for anything but for the supernatural element love fantasy

I was mad happy seeing that Seung Gi accepted the role after i first read he declined it!!!!I liked the pair,i think they will rock it!

If this casting doesn't work out, I'd love to see Lee Se Young in this role.

Ooh...changed my mind...Kim Suel Gi would be absolutely my first choice above anyone.

My concern with Oh Yeon-seo is that she crafted both of her recent characters the exact same way and the OTTness of it was a little too abrasive. Suel-gi can do the same thing, but somehow it's always endearing.

Somehow, this pairing sounds a bit off. I don't see them having good chemistry but if it goes through maybe I'll be proven wrong. Let's see. Though really, I'd rather have a Park Shin-hye- Lee Seung-gi pairing. Or maybe even Han Hyo-joo reunion.

Oh Yeon Seo seems like she is typecast to do quirky comedic roles already. Hopefully this one won't waste her talent.

oh yeon seo is my queen

Ditto! Peeps complain about her over-acting in My Sassy Girl, but if they'd watch the 'Behind the scenes" of MSG, the director was constantly wanting more slapstick comedy(over the top) from her. She's a phenom actor having won Best new actress in 2 different dramas in 2012, then following it up with Best leading Actress in both 2014 and 2016. I can't think of another actress achieving so much in so little time