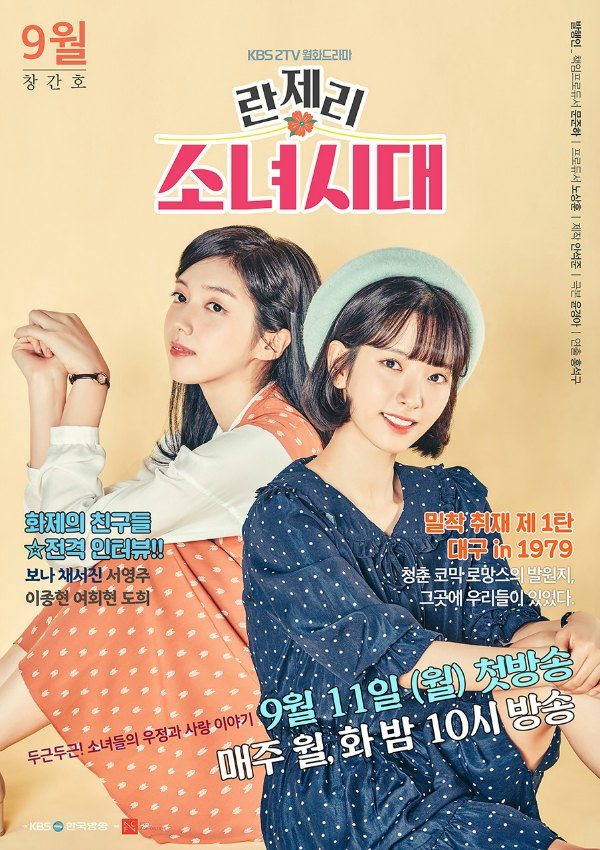 School 2017 may be gone (sniff!) but KBS has a new youth drama on the way to replace it on Mondays and Tuesdays. This time, we’re going back to 1979 for throwback drama Lingerie Girls’ Generation, about a rambunctious group of high school girls and their friendships and first loves.

Reasons to watch: What this drama has going for it is zero expectations, since it’s a short series at just 8 episodes and full of fresh faces like idols Bona and Lee Jong-hyun and rookie actress Chae Seo-jin—if it doesn’t make waves, no one will cry about it, and if it happens to be awesome, it’ll be a pleasant and happy surprise.

The biggest appeal of the drama is the focus on young women, because the novel that it’s based on has been praised for its authentic feel—not just for 1970s Daegu, where the story is set, but for the feelings and perspectives of young women at the time. Lingerie Girls’ Generation is calling itself a drama about women and for women, and the relationship at the center of the story is the friendship between Bona and Chae Seo-jin, which is said to be full of jealousy, growing pains, rivalry, and love.

What this drama has going for it is zero expectations -I heard statements similar to this many times in the past when my friends described the guys they tried to set me up with.

I'm so ready for this drama!

I love the premise of this drama, although not impressed with Bo-na in The Best Hit. But I may check it out especially with only 8 epi.

There really is almost nothing to lose with this drama. If it's crap so be it but if it turns out to be good, then yay!!! Bo- na made zero impression on me one way or another in The Best Hit so I have no feelings about her going into this.

I don't know what to expect from this drama, but I'm watching it for Chae Seo Jin because it's her first drama. I wonder how this will turn out.

So there are 3 dramas floating right now with girls bonding coming of age youth genres? Confused

I live for this kind of genre. Slice of life stories are so light but peppered with deep emotions and reality that they will always strike a chord. I can't wait.

Uh... Why is it called Lingerie Girls' Generation?

It's from a novel with the same title. Official English name from KBS is Girls Generation 1979

Good question @Astrojoy, good answer at Dax, I came here for an answer to this Q. So thanks, I didn't even have to leave this site.

That poster is LOVEEEEE if it reflects the feel of the entire series, then it promises to be awesome

Watching it for Seo Young Joo. He was usually doing roles as some rebellious guy so I'm quite excited for this. Watching the first ep and I kinda felt sad for his character but I hope he shines as it goes on.

He's so cute with his crush on jung hee! I think I can already see how the relationships are going to unfold. Sad that it's only 8 episodes.

It's the setting and period that's drawing me to this