The innocent ones are coming in Revolutionary Love’s new posters 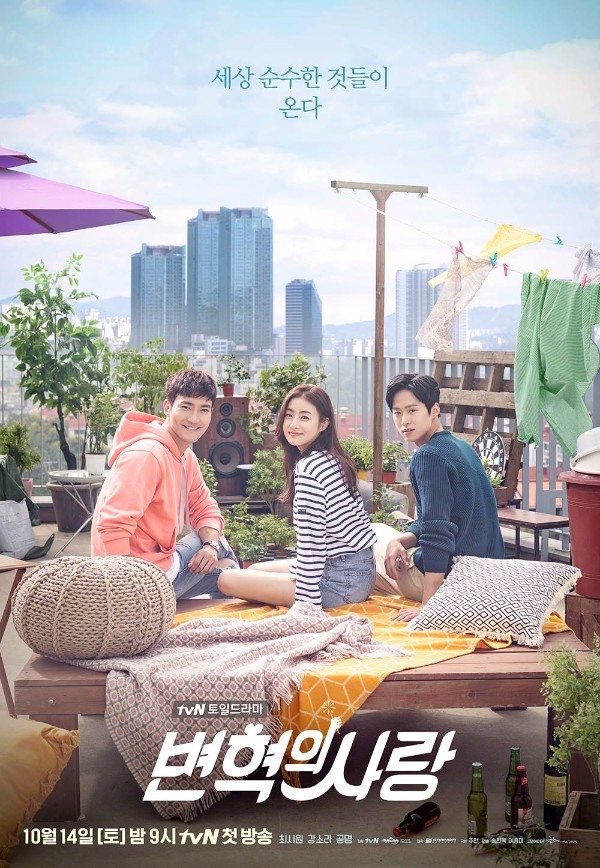 Hidden chaebol and Candy girl romance drama Revolutionary Love recently released more stills and posters of its three leads: Choi Siwon (She Was Pretty), Kang So-ra (Neighborhood Lawyer Jo Deul-ho), and Gong Myung (Bride of the Water God 2017). The caption for the poster on top says, “The world’s innocent ones are coming.”

For this drama, Siwon transforms into a third-generation chaebol who disguises himself as an unemployed slacker. And whilst he’s going about living his secret identity, he meets Kang So-ra, who despite her great education and qualifications, hasn’t managed to secure permanent employment. He’s followed around by his secretary and childhood friend, played by Gong Myung, who is elite in every way except for his birth. Gong Myung dreams of becoming like Siwon, but right now he works as a glorified babysitter for his immature friend, cleaning up the messes that Siwon creates.

I’m going to have so much fun watching chaebol Siwon with zero survival skills struggle with real-world dilemmas like chores and rent. It’ll be like Shopping King Louis all over again, except with the wacky charm that only Siwon brings to his roles. I’m expecting Kang So-ra to be as relatable as always in her role as the righteous underdog super part-timer. 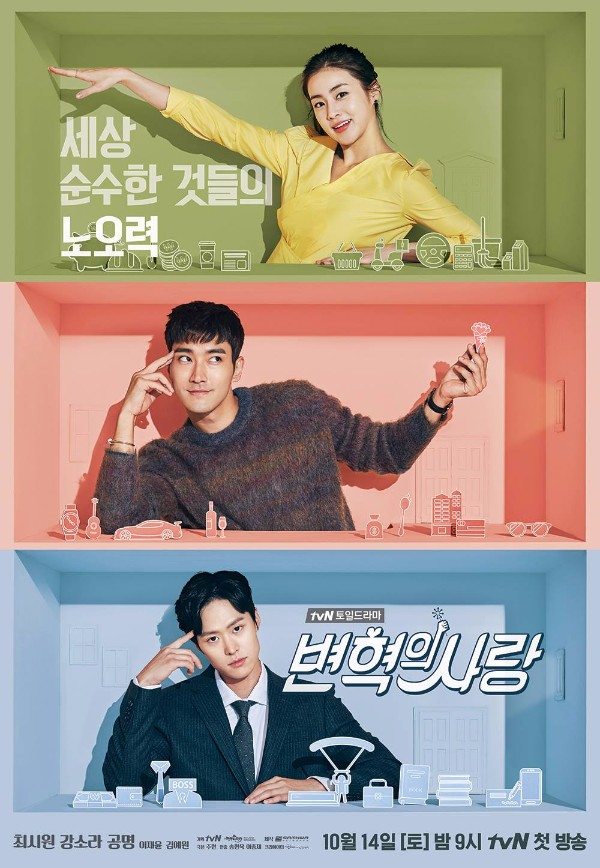 The second poster says, “The hard woooork of the world’s innocent ones,” while showing the three main characters with items in their panels that show off their backgrounds. For instance, Kang So-ra has items related to her countless part-time jobs; Siwon has luxury goods showing his flashy lifestyle; whereas, Gong Myung makes an exasperated expression with stacks of papers on his desk (there’s also a tiny man with a parachute, shorthand for nepotism).

I’m not quite sure what to expect from Gong Myung’s character yet. I like it when he plays the optimistic puppy-dog boy, but the stills below seem to indicate he’ll be moodier than in his previous roles. I just hope that despite his jealousy of Siwon’s wealth and privilege, it doesn’t get in the way of an awesome bromance. 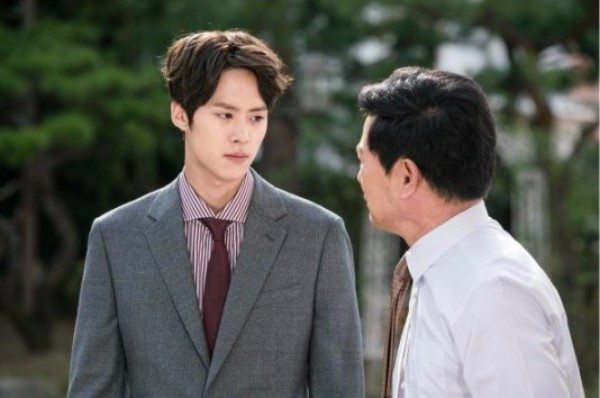 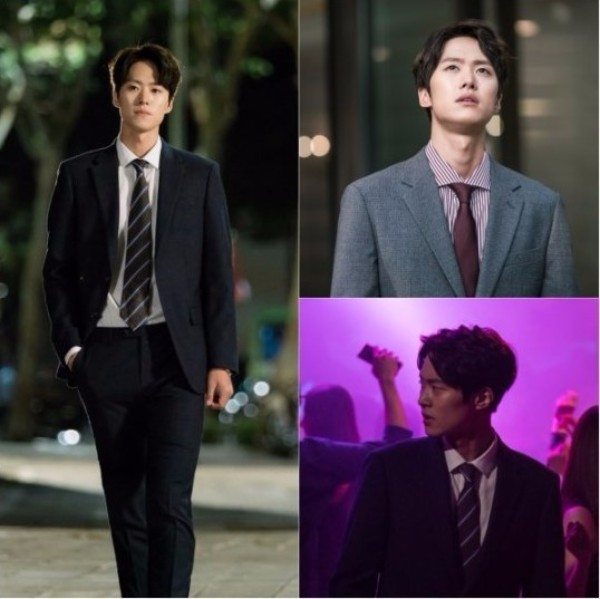 Hmm... Is it a current trend to shoot posters on rooftops?

I was reminded of this:
https://www.youtube.com/watch?v=56g4D61ViAA

You just read my mind! I thought the same thing as soon as I scrolled ... ;P

The poster reminded me of all the times the Fight My Way bunch hung out in the rooftop!

I love dramas with puppy love (meaning a male lead who both admires and loves the female lead and is a bit goofy/clumsy in portraying his affection). Siwon pulls off these kind of roles the best since he's quite goofy in real life and I can't wait to see the chemistry he'll create with Kang So-Ra (and try really hard to unsee her dating scandal with Hyunbin LOL)

I believe actor Choi Siwon and Kang Sora will have good chemistry.

I am thinking that the word scandal being used in korean gossip magazines whenever there is news of someone dating just comes from their very poor english skills.

Oops! I didn't mean scandal as in scandal :D I used it the same way Koreans use that word (without the heavy connotation) and of course I don't have anything against them dating!

Oh ok. I don't have a good understanding of the Korean culture. Thanks for the clarification redfox and dubuqueen.

it it truly is a combo of Rooftop King Louie + a bit of Strongest Dimpleman + lots of Siwons´ derp face, then I´d sail anywhere with any ship, even rubber boat or duck or old shoe, whatever they give me.

Loving the premise and the teasers so far.

Now all I ask for is that subs will be available 😢

Gong Myung looks so different....I couldn't really recognise him..... Maybe it's the hair.

Good that he is trying a different role. Looking forward to his performance in this drama.

Thanks for the news @tineybeanie :) , I'm ready for this drama 😎Shopping King Louis happy/cute/funny vibes with SiWon ? it's just another reason for me to watch it 😜

I love Gong Myung when he plays the 'optimistic puppy-dog boy'. But I like it even more with his moody looks. He's totally transformed into a more sophisticated person despite his young age. Hope he'll play the 'elite' part well.

Me too, i am looking forward to see a different side of Gong Myung.

If this is anywhere near as good as Shopping King Louis, I'll be a happy camper! Love both Siwon and Kang So-ra so I'm looking forward to this. The director is pretty reliable, too. I've never seen Ms. Temper but I know many people loved it, so I have hopes for good writing, too!

Aw this seems like it'll be really cute! I also love it when Siwon plays wacky characters cause he is so charming and goofy, but I hope in the future he tries to deviate from the whole chaebol character and do something different haha.

Wow that haircut on Gong Myung made it hard for me to recognize him. Feels like he's found a mature role out of the last few he's acted in. I like how the drama isn't selling itself as something else, going straight to the point of being a chaebol candy drama. Sometimes a generic sweet drama with good execution is all we need.

I wouldn't have recognised him either from the last thing I saw him in which was Drinking Solo. I like the new hairstyle , it makes him look a bit more mature and suit his role.

Love her, love him! Looking forward to having my heartstrings pulled and funny bone tickled.

The poster is cute, I wanna watch this already and yeah, here's to hoping for that awesome bromance between glorified babysitter Gong Myung to derpy chaebol Siwon

Ahhh I have the exact same hoodie that Siwon is wearing!! Except I don't look half as good as he does in that!