Smile-filled stills from the first script read for KBS’s upcoming legal mystery drama Witch’s Court (previously known as Don’t Trust Her) have been released. It’s been two years since Jung Ryeo-won (Bubblegum) was on television, and I’m excited to see her comeback as an ace prosecutor down on her luck. Yoon Hyun-min (Tunnel) plays her counterpart, an idealistic rookie prosecutor with great looks. They work together in the violent crimes department, specifically investigating pedophilia cases.

Jung Ryeo-won plays an ambition-driven woman who does whatever she needs to do in order to be promoted, until she gets knocked down from her rapid climb up the career ladder when she becomes involved in an unexpected case. On the other hand, Yoon Hyun-min plays a man who is much more naive; because of his idealistic belief in justice, he chose to become a prosecutor over becoming a doctor.

Jeon Gwang-ryeol (You’re Too Much) plays the main villain with cold charisma, while Kim Yeo-jin (Man to Man) plays the head of the female pedophilia investigations department. Lee Il-hwa (Man Who Sets the Table) will play Jung Ryeo-won’s warm-hearted mother for the drama, and Kim Min-seo (I’m Sorry, Kang Nam-goo) has also joined the cast in an unspecified role.

The promo for this drama has only just begun so it really wasn’t on my radar until now, but it sounds so interesting. When the title changed to Witch’s Court, instantly my mind went to Witch’s Romance where I first discovered Yoon Hyun-min. I can’t help but hope it’ll be a similar dynamic between the main characters: a noona workplace romance, which has already got me swooning.

Of course the drama could focus more on the cases, becoming more of a procedural than a romance. I think that would be awesome too, since Yoon is no stranger to that genre, having played a violent crimes detective in his most recent drama Tunnel. During the script read, PD Kim Young-kyun (Mary Stayed Out All Night) recognized that they were dealing with a sensitive topic in Witch’s Court, and promised to try to shed a new perspective on child rape cases through the work that’s portrayed, while at the same time providing an enjoyable viewing experience for drama watchers through the characters. 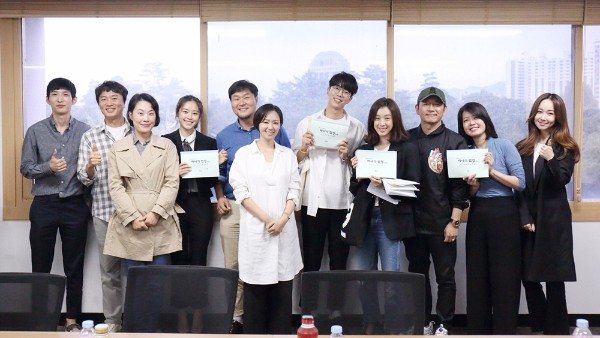 For once, the dude is the idealistic newbie! I'm not going to watch this show because I can't stand Jung Ryeo-won, but yay for gender reversals. Get it!

Back track, I love procedural, I love Lee Il-hwa and I love Kim Yeo-jin. But, do they outweigh my intense dislike for Jung Ryeo-won? Decisions, decisions.

Are you ok? How did she hurt you?

I've never liked her in any of the shows I've seen her in. I first saw her in My Name Is Kim Sam-soon and I straight up hated her character. More power to her for choosing roles she likes to do (maybe?) but I find that I end up hating her in them. There are very few actresses I can't stand to watch and she and Jung Yumi are two of them.

i second your opinion on jung yumi of guest appearane in LMH's mermaid drama fame..

every screen appearance annoys me.. including six flying dramas.. and it is difficult for anyone to lose interest in dat drama

@alasecond not that Jung Yumi. The one in I Need Romance 2 and Discovery of Romance. That's the one I'm talking about.

I love Jung Yumi!
Have you seen some of her movies?
She is one of the few actresses in their 30s with a thriving film career.

*GASP!!* How could you? I'm the opposite. I love Jung Ryeo Won and Jung Yumi! Enough to consider watching a drama I'm not normally interested in just because they're in it.

I love Jung Yumi and Jung Ryeo Won. They are talented actresses. I hated her character in Samsoon first time. Then i loved her how she was acting and speaking fluent in english even she was annoying second lead when i watched the drama for the second time. She is beautiful and she picks her projects wisely i think. Jung Yoo Mi is love for me. I hope she does more dramas.

but its okay. i understand coz i have few actresses i cant like however i tried.

I don't know why but I don't like her either. :/ It started from my name is kim sam soon lol.

And I can't stand Kim Eun Sook dramas and her heroes

Okay, more power to you.

yays, i love Jung Ryeowon in Bubblegum! i wished Kim Yeojin will play the role of her mother (aww, Angel Eyes~), but Lee Il-hwa is awesome too!

I love Jung Ryeo-won! I'm glad she is back. That goes for the underrated Kim Min-seo too.

The title of this series excitedly caught my eye and I thought "Yay! Another supernatural series in time for Halloween!"

Love them both a lot! But it doesn't seem right to have Yoon Hyun Min lead his first show without a bromance too, he's known for them.

I like the dynamic which is promised to us between the two leads but child rape cases... I guess I will wait for the recaps - thanks dramabean! - to see if I can bear with it.

Wait, is this a show that focuses on paedophilia cases? Which, I don't know how you can NOT be at least a bit exploitative to choose that as the only case type...

I feel like 'child rape' and 'enjoyable viewing experience' aren't really things that should be used in a sentence together. Hopefully they'll be able to handle it in a delicate way that doesn't become too disturbing and heart breaking

Agreed. Was really excited about this until I read that. I feel like there's a fine line between poetic license and exploiting for the sake of entertainment. There's something distinctively uncomfortable about mining the suffering of children for the sake of a dramatic and "enjoyable viewing experience".

Brad is best! But seriously, the whole paedophile thing is daaaarrk... but is the only thing that will make we watch another legal procedural

LOL...You all are way too funny. Jung Ryeo won wasn't the first lead in Kim Sam Soon; and she did so great her job that I kind of hate and felt sad for her in that drama. I don't know why she hasn't get a good drama because I Love her acting and by the way I like Jung Yumi's dramas... and of course her acting... I may watch this drama.

Will give it a watch.