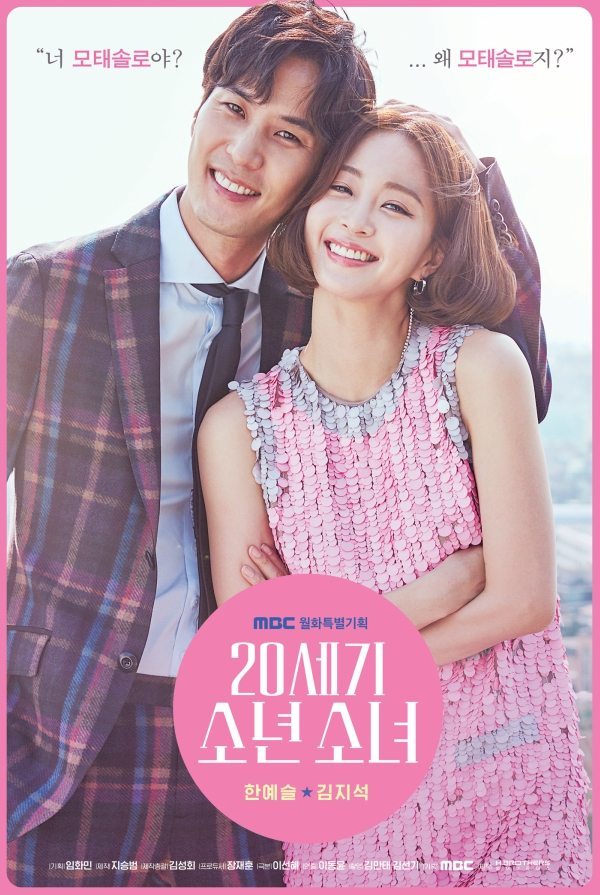 Oh, I think I’m going to really adore this heroine. It doesn’t matter that she’s a gorgeous, former idol-turned-actress in her mid-thirties, Han Ye-seul’s (Madam Antoine) character and her interactions with her girlfriends and potential love interests are so relatable from the clips we’ve seen so far. In particular, I’m looking forward to watching her and Kim Ji-suk (Rebel: Thief Who Stole the People) as they adorably rekindle a high school romance in MBC’s 20th Century Boy and Girl, which has finally secured a premiere date for next week.

The recently released teaser for the show uses scenes we’ve already seen, but I absolutely love the new ones of her with her girlfriends, played by Ryu Hyun-kyung (Empress Ki) and Lee Sang-hee (Our Love Story). We start the teaser with them playing a dangerous and familiar game: “Park Bo-gum or Song Joong-ki?” Lol. Men seem to be a standard topic of conversation among the three girlfriends, and their trains of thought run hilariously parallel with discussions I have with my own friends.

The childhood friends are all surprised at the news that their old schoolmate Kim Ji-suk has reappeared. He doesn’t waste any time getting to the point, either: He asks Han Ye-seul out repeatedly, and though we don’t see her respond, he catches her trying to suss out his apartment, to her mortification. Which is when he oh-so-casually hands her the roses he “picked up off the ground somewhere.” They’re going to be so cute.

I’m pretty sure I’ll be firmly in Kim Ji-suk’s camp in this drama, but I find it endearing how Han Ye-seul completely freaks out when she learns she’s been paired up with former idol Lee Sang-woo (All’s Well With a Happy Home) to film the show-within-a-show version of We Got Married. I mean, the hiccups would be the least of my worries if I were going to play fake spouses with my oppa crush.

But, oppa or not, you can’t really beat the familiarity and the transition between childhood friends and sweethearts to adult lovers. It’s a trope I will never get tired of, and there’s something so nostalgic and tinged with a little wistfulness about this teaser’s ending, where we see the trio of girlfriends plus Kim Ji-suk posing in front of their school gates as children and then adults. Han Ye-seul narrates, “2017, the kids met again, having become 35.”

MBC’s 20th Century Boy and Girl will premiere this coming Monday with a double-header, which means we’ll get episodes 1-4 on October 9. 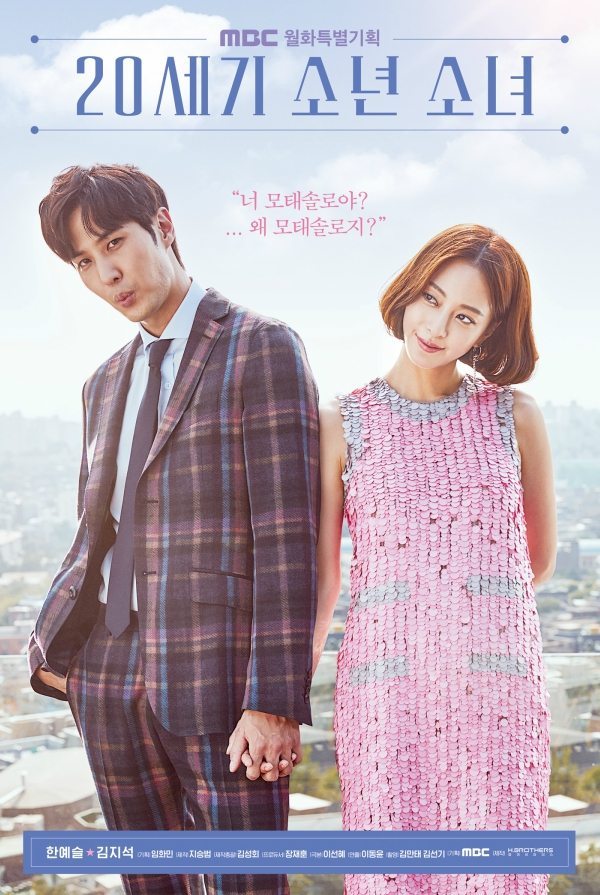 Finally my much awaited drama has a premiere date. They are just so cute together and I adore the friendship between the 3 girlfriends already.

We waited for so long!

I like the bright and happy colors. I hope the trend of washed out dramas comes to an end very soon.

This gives me One More Happy Ending vibes, and that drama was such fluffy fun with great female friendships too. And Kim Ji Suk finally getting his much deserved leading man role!
(Plus, using "Come On Eileen" in this trailer has only endeared the show to me more now. )

I agree! It's high time Kim Ji-suk got cast as male lead. I'm up for a frothy rom-com after his epic turn as Yeonsangun in REBEL. Pass the popcorn! ;-)

Thanks so much for pointing out Dexys Midnight Runners in the background of the teaser. I haven't heard them in ages. ;-)

I put a link to "Come On Eileen" with lyrics on my fan wall, along with pointers to related songs. Kevin Rowland's ancestral brogue makes it hard even for this Irish-American to understand what he's saying sometimes. ;-)

The refrain is actually a piece of Tin Pan Alley Americana: “Too-Ra-Loo-Ra-Loo-Ral (That’s an Irish Lullaby)” -- a #1 hit in 1913 for actor, tenor, composer, and lyricist Chauncey Olcott. Composed by lyricist and actor James Royce Shannon for the New York stage play “Shameen Dhu” [Dark-haired Jimmy]. Bing Crosby later revived it in the film GOING MY WAY (1944), and sold over a million copies.

I think I'll like this based on the teasers. Hopefully this (and Revolutionary Love) will be able to fill the Live Up to Your Name -shaped hole in my heart.

Same here, hoping this drama will be able to fill up the hole 😓Still not able to move on...

Ikr! *sad tears* Still sad we won't have any new episodes to look forward to this weekend.

yess! i think this drama will pull me out from drama slump

For some reason I don't like han ye seul. Everything else seems good about the drama.

the ubiquitous Subway, and the child actress for Kim Ji Won in Fight My Way! She's adorbs!

Omg THEY USED COME ON EILEEN!!!! My happy song!

It was also on last night's Superstore episode <3

The color palette is nice and bright. Han Ye Seul and Kim Ji Suk look really cute together too. Planning to give this drama a try. ^^

Is it normal to be teary-eyed while watching a teaser? Because I am.

I'm running the risk of deanimating from joy: Kim Ji-suk and Lee Sang-woo in the same cast. I loved the latter to bits in LIFE IS BEAUTIFUL. Keeping my fingers crossed that SLS doesn't pulverize my ticker too badly. ;-)

Here's hoping that Gong Ji-Won is more successful than Jin-sang was in OH HAE-YOUNG AGAIN.

Thanks for your update, tipsymocha! Even during Chuseok, DramaBeans never sleeps. ;-)

PS -- I love your screencaps! Dang, that has to be the coziest, homiest, most inviting rooftop lanai I've ever seen. I feel happy just looking at it.

The color pallet of this show is like a breath of fresh air. I've seen too many dark, drab, greyed-out sets for too long. No wonder so many Beanies seem to be in a terminal drama slump. Manseh! A feast for the eyes at last.

I am scared to be hyped up for this drama but cant help myself.. if they can pull the childhood friendship goals and childhood friends to lovers to reunion after a long off.. this might be one of my all time fav kdrama coz these are some of my fav tropes. And judging from the teasers its hard to not get excited . Plz dont dissapoint !

Ohmygosh, this is too cute! This came at the right time, I need me something fluffy!

Question: Is Subway the only fast food chain in Korea? This otherwise looks adorbs!

So you mean, choosing between your childhood (maybe 1st love) friend, and your idol oppa?
Remind me of Reply 1997. :D

It doesn't hurt that they're playing Come on Eileen in the background, it's so iconic of the 80s and always gives me nostalgia. I think I may watch this show :)

I have been waiting forever for this drama. And I already spot Subway, not cool.

Awww! Loving the posters too!

Personally, I am just happy to see Kim Ji-suk in a good guy role. He always makes me hate his characters so much that it would be great to not go 'ruh-roh!' every time he appears on screen.

Does anyone know the brand name or where she got that hot pink top from episode 5????