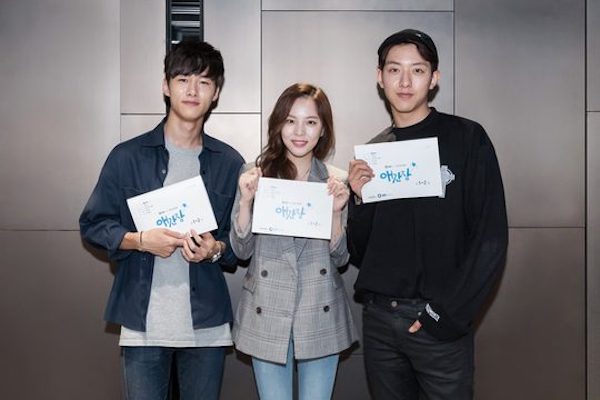 Timeslip drama Longing Heart has changed networks: Originally set to broadcast on SBS Plus, now Longing Heart has been picked up by OCN, and will air as an 8-episode drama next year. The webtoon-adapted project stars CNBlue’s Lee Jung-shin (My Sassy Girl), Seo Ji-hoon (School 2017), and Lee Yeol-eum (Monster) as its main love triangle.

Lee Jung-shin plays the main character, a math teacher who never forgot his first love, played by Lee Yeol-eum, from ten years ago. Through a fateful chance, he gets the opportunity to go back in time to when he fell in love with her and woo her all over again. His greatest competition is his younger self, played by Seo Ji-hoon, who seems to be suspicious of his every move.

Although OCN is primarily known for its action thrillers, the cable channel has been venturing into the romance territory this year with rom-com My Secret Romance earlier this year and Meloholic set to premiere next week, which features Yunho and Kyung Su-jin in a mind-reading romance. Longing Heart is a pre-produced drama that finished filming on October 25, from the SBS Plus production team headed by PD Min Yeon-hong, who also created hits like Ugly Alert and Her Lovely Heels. While I haven’t heard the best things about My Secret Romance, I really enjoyed PD Min’s Ugly Alert, so hopefully Longing Heart will be more like the latter.

Fantasy romance Longing Heart will air in the same Monday-Tuesday timeslot as Meloholic; that drama is tentatively scheduled to be followed by supernatural romance That Man Oh-soo, which is currently courting Lee Jong-hyun and Kim So-eun. That puts Longing Heart’s premiere in January; it will also be available via the Oksusu app before the televised broadcast.

OCN must be the polarizing channel ever. On one side they have gritty crime thrillers, and the other they have sweet saccharine rom-coms.
Not complaining tho, I love how there are more choices now.

How does that even work? If a particular network did all the hard labour and had everything filmed and finished with their own contracted PD, why would they want to give away the broadcasting rights to another network?

I think the amount OCN has paid for it includes the expenses incurred in making it, along with intellectual property rights and projected foregone revenue and such

Maybe SBS thinks it will earn more, lose less or break-even by selling it to OCN instead of airing it themselves as they may have a better drama/show to spend their precious airtime on

Oh, okay, thank you for the explanation :) @jaderjy

Yeah, that's probably right. The cable networks typically have their dramas produced by outside production companies anyway, so whether it is produced by SBS or someone else makes no difference to them. SBS will likely make more selling it to OCN than airing it on SBS Plus, which never pulls in big numbers anyway. It's a win-win. The show will surely do better on OCN than it would have on SBS Plus anyway.

Seo Ji Hoooooon!!! So excited to see him coming out in another drama ^.^

If he goes back in time and his competition is his younger self, who looks different from him... does that mean high school? Is he going to be an adult trying to win over a high schooler?

Because this got real creepy/disgusting real quick.

I don't understand the level of plastic surgery the character went through to go from Seo Jihoon to Lee Jungshin. They look very different, even their eye shape is off- couldn't they have cast someone with at least a similar eye shape to make this a bit more believable? No bashing, I love Jihoon, I'm just...mildly baffled- as is the case with a lot of timeslip dramas if/when they're not like the same actors/actresses playing their timeslipped selves.