In this legal thriller, the country's top lawyer, who also hosts a legal-themed TV show, takes on a murder case. She is joined by a hot-headed detective. As they investigate, they learn that the case is much more complicated than it seemed, and exposes a deep corruption amongst the elites in power.

In this legal thriller, the country's top lawyer, who also hosts a legal-themed TV show, takes on a murder case. She is joined by a hot-headed detective. As they investigate, they learn that the case is much more complicated than it seemed, and exposes a deep corruption amongst the elites in power. 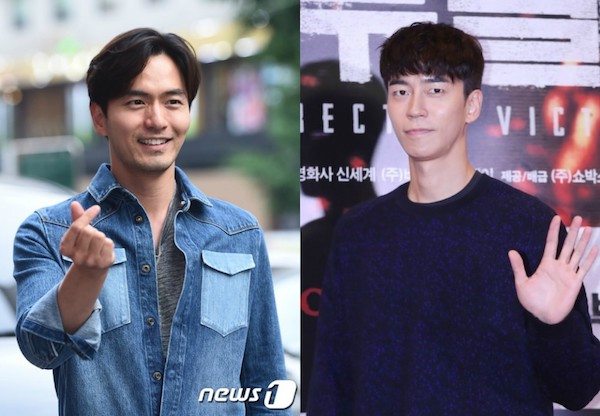 I wasn’t too impressed with his cheating husband role in Man Who Dies to Live, which is why I’m doubly excited for Shin Sung-rok to return to the type of role where he shines most: psychopathic villain. He’s confirmed that he’ll be going to SBS next as one of the main leads of upcoming drama Return.

He’ll play a character called Oh Tae-seok, a CEO of an IT company. He comes from a wealthy family and would have been able to live comfortably off his trust fund, but he has a shrewd business acumen and developed a smartphone app that skyrocketed to popularity, earning him a lot of money. And so without any of his family’s help, he was awarded Businessman of the Year and has been a rising financial star ever since. However, in order to correct a mistake he made, he keeps on making the wrong choices which puts him on a path of no return. His character slowly transforms into a devil whose rage cannot be contained.

The main story though is about a late-blooming poor lawyer, played by Go Hyun-jung (Dear My Friends), and the wife of a high society murder scandal suspect. They end up working together in a partnership to defend her husband. The wife is also a lawyer by training, but she’s rusty because hasn’t practiced her craft in a long time. The case is headed by a gangster-like investigator, who in the middle of pursuing an illicit drug manufacturing operation becomes aware of a crime of passion committed by the heirs of high society. Some reports say that this role has been offered to Lee Jin-wook (Goodbye Mr. Black) and that he’s considering, but other reports say this is a baseless rumor. So, there’s just been a lot of speculation in the media and it’s unclear whether he’ll be cast.

In any case, the character seems quite interesting: With the highest arrest rate in the violent crimes division, his character has received the medal for Best Policeman for three years straight. But due to his fiery temper, he also has one of the highest rates of disciplinary action against him. He had crossed paths with Go Hyun-jung’s character five years ago due to a criminal he’d caught back then.

PD Joo Dong-min (Take Care of Us, Captain, The Family Is Coming!) is collaborating with Writer Choi Kyung-mi for this upcoming courtroom drama. The writer is a mystery, so I’m banking on this awesome cast with Shin Sung-rok and Go Hyun-jung to deliver.

Wednesday-Thursday SBS drama Return will air in January next year, following While You Were Sleeping and Nothing to Lose.

Via News1, IS Plus

ohhh yeah. the man def shines as a psycho villian. Remember the My Love From Another Days?

He honestly creeped me out just as much in On the Way to the Airport. "I may be cheating but there's no reason for divorce" *shudders*

I saw him in Thank You, and that was even creepier after all his villain roles.

I feel like his most creepy role yet was Kang Do-young in Liar Game. I got legit chills when he did that micro-expressions controlling thing. He's an outstanding actor and he deserves so much more than to be typecast as a bad guy.

Shin Sung-rok can rock hero roles too if they give him a chance to play one.
He is a leading man on stage for well known characters like Edmond Dantès, Romeo, Prince Hamlet etc.

I need him as a hero! But no one would dare to cast him as one because of his previous chilling roles, right?

it may be bad if he's gotten stereotyped but i guess he swing both ways — small, good guy roles and vile, villainy ones.
i guess he is simply having a good time playing those evil roles; and probably the lead goody-two-shoes-role that a lot have been wishing him to do hasn't arrived yet.

Well, I don't want to watch anything with Lee Jin Wook in it.

Ready for Shin Sung Rok, but I'll pass on LJW

LOL. Don't worry, I'll take him if you pass Lee Jin Wook over.

Bump Sungrok up to main lead instead, bye he doesn't deserve all this bs

The main male lead role should have been offered to Shin Sung-rok. But since he is going to play as villain, I hope they would cast someone who is as calibre as him and Go Hyun-jung. Lee Jin-wook was serviceable in some of his roles but I don't know if he will make a believeable police officer with fiery temper. Jang-hyuk will be a great choice but he is already doing another drama.

Shin Sung Rok is really good as a villain - he is. But after watching Liar Game I can't help but feel sorry for his characters. And if the male lead isn't charismatic enough, I'll watch this for the villain. Which could end tragically.
Could someone give him a leading role please? Pretty please? I would take even an anti-hero (like Kim Young Kwang in Lookout).

if the lead is not good enough, Shin Sung Rok will definitely overshadow him. Ha!

I love Shin Sung-rok to infinity and I know he does these types of roles extremely well, but I would love to see him play another role like the one in Three Dads One Mom again. I'm afraid he's going to get typecasted into either a dangerous man or a cheating man.

staying at home plus travelling with a baby has pushed him back into psycholand. I see. Let this be a warning.

Shin Sung Rok, the one that made a simple question about how one's health is a deadly one. gave me nightmare's in those days. Hope this role is as memorable as that one!

If I can watch Lee Byung-hun's movies without any grudges then welcoming Lee Jin Wook back to dramaland shall be no issue.. Shin Sung Rok as the psychopathic villain? Okay, I'm in!