The Mad Dog team assembles to take down insurance fraud 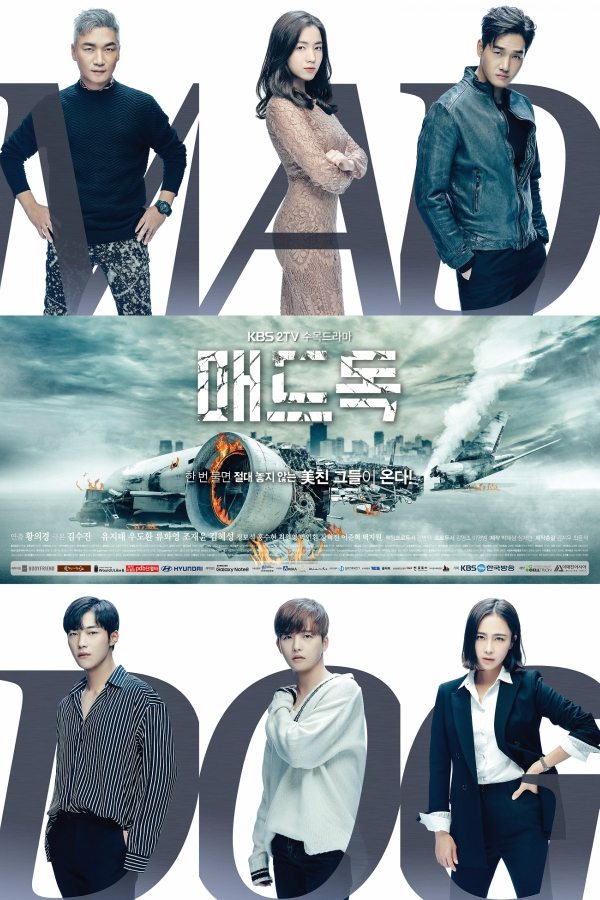 Well, better late than never, I always say. We’re about two days away from the premiere of KBS’s upcoming crime thriller Mad Dog, and posters for the show have finally been released. The cast looks quite cute together in the behind-the-scenes stills, and I can’t wait to see their characters all interact once the show starts.

When I think of the phrase “insurance fraud,” it’s not exactly the sexiest premise for a crime drama, but trust Yoo Ji-tae (The Good Wife) and Woo Do-hwan (Rescue Me) to level up the need-to-watch quotient of this show. Yoo Ji-tae will play Mad Dog team leader Choi Kang-woo, the ferociously tenacious insurance fraud investigator with a 99 percent success rate. He’ll have a special bromance with Woo Do-hwan’s character Kim Min-joon, a street con artist with the wits and gut instinct that make him a valuable asset to the Mad Dog team, though his true motives for joining a law enforcement body remains unclear.

I’m quite eager to see Woo Do-hwan reunite with Jo Jae-yoon (Rescue Me) in back-to-back projects, with their roles sort of reversed now that the former rebel heartthrob plays the shady con and the chilling cult enforcer is now an insurance investigator who dreams of becoming a nurse in the children’s ward someday. It took a moment for me to compute that Jo Jae-yoon’s character Park Soon-jung wouldn’t be evil personified like in Rescue Me, but I kind of love his character’s contrasts, like his polite demeanor coupled with his love for gaudy cheetah print, or his time spent in prison while also having an unexpected innocent side. 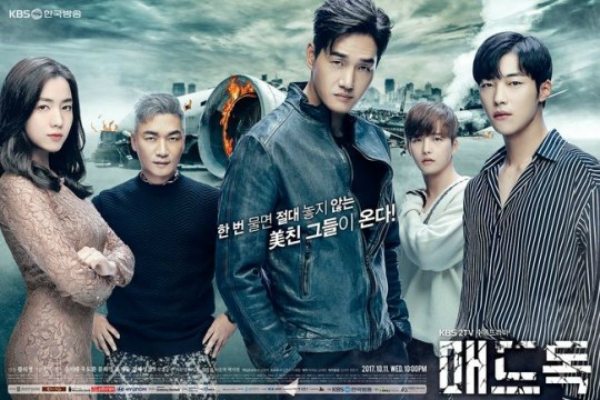 To round out our Mad Dog team are Jang Ha-ri, played by Ryu Hwa-young (Father Is Strange), and Ohn Nu-ri, played by Kim Hye-sung (Falsify). Ha-ri is a former competing gymnast skilled at disguising herself in order to investigate insurance fraud schemes. Nu-ri, on the other hand, is the computer whiz with a sun allergy (literally) to Ha-ri’s field agent, and is so good at what he does that he could breathe life back into dead machines.

Hong Soo-hyun (Mom, Would You Give Love Away) is also returning to dramaland as the only daughter of the family that owns Taeyang Life insurance company, and while her character isn’t named as an antagonist or ally of the Mad Dog team, her relationship with the insurance fraud investigators will be “tense.” I don’t think I’ve watched Hong Soo-hyun in anything since 2011’s The Princess’s Man, so it’ll be nice to see her back on my screen.

Mad Dog is premiering this week on October 11, and will take over KBS’s Wednesday-Thursday slot for the next eight weeks. 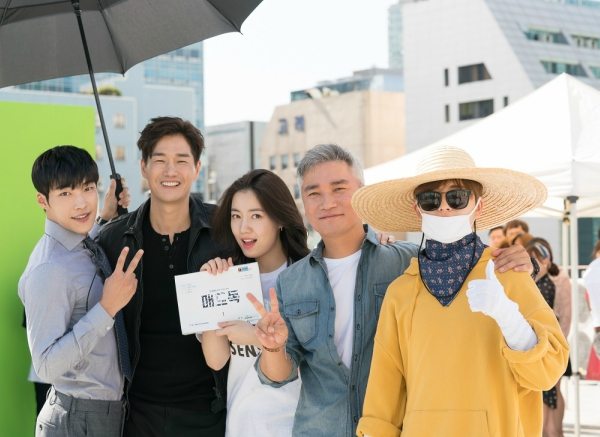 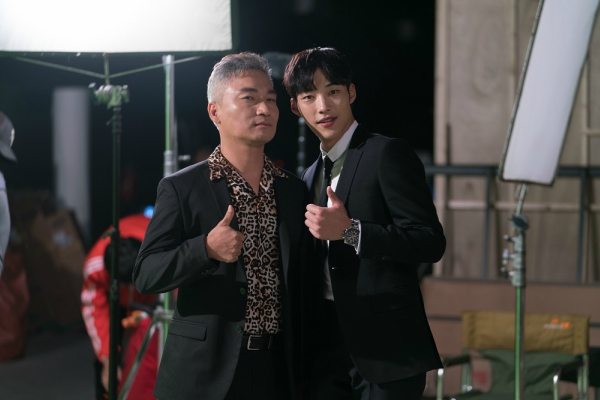 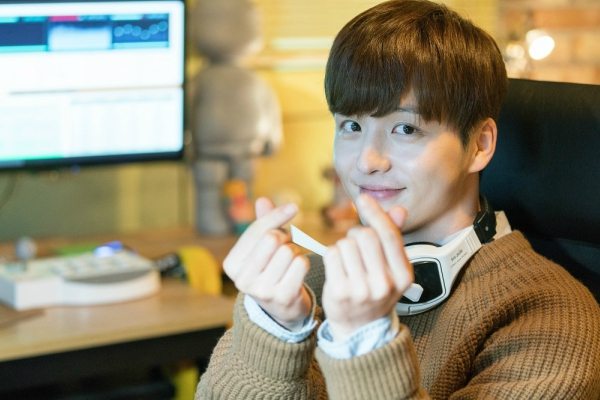 That first still, how CLOSE is Woo Do-hwan to Yoo Ji-tae, LITERALLY? Haha!

I also thought that Kim Hye-sung was cute and effective in his very small role in Falsify (more like an extended guest appearance) and of course, Ryu Hwa-young~ So excited for this drama even if insurance fraud sounds like a snoozefest on paper. Haha!

I feel like he's going to call him Oppa haha. WDH loves his hyungs (Go Soo in Rescue Me).

On twitter we compared the poster to the "best" graphic design work out there 😂😂😉
It seems weird that KBS would take that long to release that poster. Does anyone know if this drama has production problems ?

Oh, I like Ryu hwa young in Age of Youth, and the one show I saw of father is strange she seemed good so I may have to watch this show :)

Put this on my to watch list just the other day because of the premise mostly, but also the main male leads, but I also love Ryu Hwa-young and her characters in both things I've seen her in so more points!

In a slump, but could really go for a drama with a good ensemble cast, especially one with Yoo Ji Tae, Woo Do Hwan, and Ryu Hwayoung in it.

i really love the poster with "mad dog" spelled out but like what's with the second poster?? a plane?? it looks like a half-assed school project

I believe the plane is related to the major plot of this drama. But yeah, i agree the poster should do better

Finally Hong Soo-hyun is attached to this drama poster. Better late than never I guess 😉

Jo Jae-yoon is back to another drama too. I love this actor - he is so versatile. I hope this drama will get decent rating for premiere week and please be good drama!

Ditto on Hong Soo-hyun, she is an incredibly underrated actress imo. I loved her in The Princess's Man and History of a Salaryman, so I'm glad to see her back in action.

I love anything Jo Jae-yoon stars in cause he's a damn scene stealer in most dramas I've seen him in. Also add to the fact, I absolutely adored his episode in Real Men

Thanks for the update, tipsymocha!

I for one am looking forward to a thriller that does not involve sociopathic serial killers. Here's hoping that it's an engaging battle of wits. ;-)

Oof. That is one eyesore of a poster. I made better stuff just dicking around in photoshop when I was in high school.

When I read "When I think of the phrase “insurance fraud,” it’s not exactly the sexiest premise for a crime drama" , I immediately thought of "Double Indemnity"

Posters really.. I hope they editing the drama better.

I think Ryu Hwa-young is very, very pretty but that first poster does not flatter her at all. :\

LOL, insurance fraud isn't the sexiest thing at all. My job is to find potential insurance fraud and it's a lot of SQL, spreadsheets, and Google. The closest to sexy my job has ever gotten was the time I looked up a suspicious doctor and his website was filled with before and afters for Brazilian butt lifts.

Definitely looking forward to this.

Is Woo Do Hwan standing there because his character Dong Chul in Save Me started with a D? (Sorry if this thought seems useless lol).
Also after Dong Chul X Sang Mi ship didn't sail I hope that he and Ryu Hwa Young have a loveline. Kind of like Healer where Yoo Ji Tae is important but not the main OTP?
P.S. Woo Do Hwan and Yoo Ji Tae look super handsome in the first picture!

God forbid there be more than one female in an investigative team. It would probably break the universe.

After Criminal Minds, I was hoping Kdramaland would make a Leverage remake too... This team of grifters resembles Nate Ford's Leverage firm he most. (Hopeful) 😁

Yoo Ji Tae & Woo Do Hwan. Woohoo! And I think I've only seen Jo Jae Yoon in villain/bad guy characters & to see him here as someone on the good side (I hope until the end) is refreshing. Haha!