Welcome to the afterlife in With the Gods 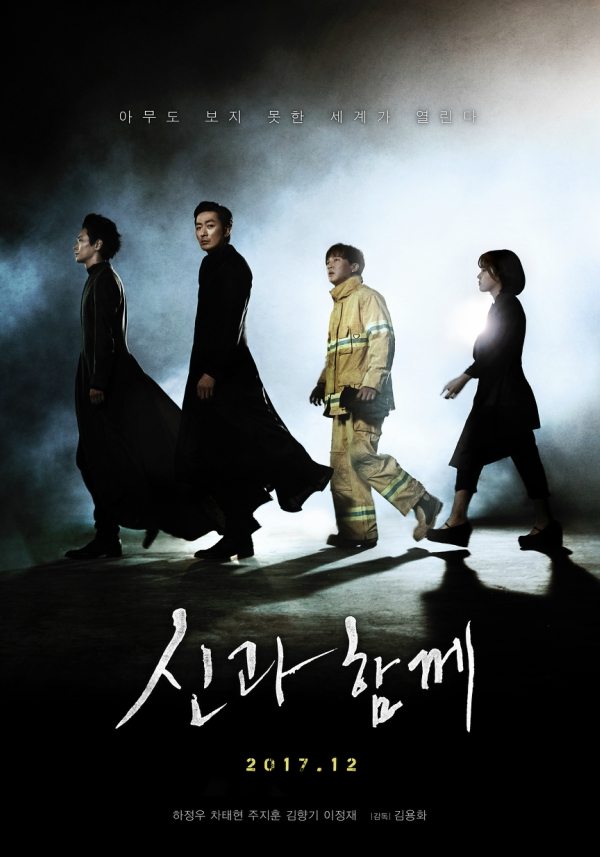 I am so ready for this!! When I first heard my favorite webtoon was getting a film makeover, I was beyond excited, only to deflate a little to hear that the actual movie wouldn’t release for a couple of years. Well, fast-forward two years later and With the Gods finally has a premiere date for this December! And by the looks of its trailer, the long production time was worth the wait.

There’s been some tweaks to the original story, but the basic premise remains the same: With the Gods gives a modern twist to Korean folklore about the afterlife, depicting deceased souls who receive judgment for their actions by various gods and their courts. The webtoon was pretty satirical and provided some sharp commentary on the state of contemporary society, while also acting as a fascinating mini-course on traditional Korean mythology.

While Cha Tae-hyun’s (The Best Hit) character in the source material was an average salaryman who died of work-related alcohol abuse, it looks like his pre-death occupation in the film version is a firefighter. Reapers Joo Ji-hoon (Asura) and Kim Hyang-gi (Snowy Road) call his name as he dies in the line of duty, both looking oddly calm as fiery chaos unfolds around them. Cha Tae-hyun is understandably confused, and I had to laugh at how Joo Ji-hoon attempts to placate him by saying, “It’s fine, it’s fine. It’s only because this is your first time dying.” How comforting. The copy reads, “After death, life goes on.”

They all meet head reaper Ha Jung-woo (Tunnel) at the gates of Cha Tae-hyun’s first trial. In the webtoon, the dead are all assigned defense attorneys for their various trials in front of the underworld’s gods, but I think the film is conflating the reaper and lawyer roles together. Ha Jung-woo informs us that there are seven hells, and that the King of Hell (Lee Jung-jae, Warriors of the Dawn) will personally choose the order of Cha Tae-hyun’s trials.

We see the reapers and the former firefighter travel through the various parts of the underworld, where “everyone goes,” but which “nobody has ever seen.” The teaser tells us that the “door to a new world has opened,” though this is not a world I’d like to spend a lot of time in, if even the reapers have a hard time traveling through it. The clip ends with our first look at a heavily bearded, chain-wielding Lee Jung-jae, the King of Hell.

I’m slightly disappointed that the film has removed some of my favorite elements of the webtoon, like the relatable average-ness of the office worker who died from being force-fed so much alcohol over the years at his company, and his ingenious afterlife lawyer who would find ways around the hell-courts’ systems to his client’s advantage. But, the epicness of this trailer has outweighed that feeling by far, and I also realize that it’s almost impossible to adapt over 200 chapters of a webtoon into two films, so I’m really looking forward to watching this soon.

I also can’t wait to see the bevy of actors who will play the plethora of characters in the afterlife and in the earthly realm. Up to play various gods in the afterlife are Jang Gwang (Mystery Queen), Jung Hae-kyun (Rescue Me), Kim Su-an (Battleship Island), Kim Haneul (Misbehavior), and Kim Hae-sook (Father Is Strange). Ma Dong-seok (Police Unit 38), Oh Dal-soo (Memoir of a Murderer), and Im Won-hee (Strong Woman Do Bong-soon) play various minor gods and judges. There are also some mortal characters in EXO’s D.O. (Hyung), Kim Dong-wook (Radiant Office), and Lee Jun-hyuk (Forest of Secrets). From what I remember of the webtoon, D.O.’s character has a particularly horrific sub-plot, so I’m looking forward to how they’ll treat that onscreen.

Whew, that is a lot of names. But, the film’s large ensemble cast just speaks to its grand scale, and I am counting down the days until I can watch it on the big screen. With the Gods will premiere on December 20.

💖My baby Kim Hyang-gi and her leading men💖

It's been forever, our little Hyang-Gi.

I feel like I've been ready for this movie since forever ago. And judging from the trailer, it seems worth the wait. Bring it on!!

Ikr? The film has two parts. Part 1 is coming out in Dec. Part 2 sometimes next year.

Wow she's all grow up! And the only female lead. LOL.

I think this was the role Park Bo-young passed on. Either one I love them both.

Visually, the firefighter uniform does stand out and draws the attention to the character...

This looks like something I would totally enjoy! :) hopefully it will show in our local cinemas.

Looks awesome. They must have poured a lot of money into this production.

Oh this is soooo interesting!!!! Now I want to watch the movie AND read the webtoon.
Personally, Any story related with Gods, afterlife, soul reapers are always so interesting because I get to see the POV of the different authors on what the afterlife is like, or whether gods are fair or not etc. Love the exploration if such concepts.
To that add cha tae hyun...., & all the other ensemble cast. Please be epic, dear movie!!!

Wow the cast is gorgous !

I'm quite excited to watch it, especially how they will depict the different hells XD In chinese culture, I believe there are actually 18(?) different levels of hell based on your sins, all of which are very gruesome. But here we only speak of 10 and know what they actually are. (Where I'm from, we have a park called Haw Par Villa that is based on chinese myth and there is a section about the 10 levels of hell and it's depicted through statues and it's enough to give you nightmares. I was a little girl when my parents brought me there and I can still remember it and how scared I was. Now it's like abandoned because the locals think it's haunted, cool place tho if your a tourist.) Maybe the Korean version is different from the chinese one because it does not look as gruesome.

Why does this give me LotR feels?

Oh, and Ma Dong Seok- I would not want to cross whatever god he plays

Well, i thought it give me Pirates of Carribbean feels.

This looks really interesting. I hope it's a success after the long production and the obvious amounts of money poured in.
Does anyone know if the original webtoon is available to read in English? I'm curious about d.o character

But are they white-washing alcohol? Well, drat.

I remember hearing news of these movies. Wasn't there also mention, at one time, of Gong-yoo being in a prequel film and starring as a reaper? I remember hearing about it somewhere. Perhaps that film idea was scrapped, but I don't think I'm imagining things, lol.

This looks awesome, does anyone know if there is a translated version of the webtoon anywhere? I can't seem to find it.

Hey, do you have link for the site? Trying to seatch but still didn't find anything :(

Anticipating this so badly!!!I must say,Ha Jung-woo looks amazing in that headline poster!

Oh boy, serious catnip here! I'm not familiar with the webtoon or Korean mythology so it's all new to me. In general, I lurve movies exploring life after death. My favorites movies exploring trials or lessons after death include A Matter of Life and Death (UK, 1946), After Life (Japan, 1998) and Wrist Cutters: A Love Story (USA, 2006).

Also, it doesn't hurt that there will be handsome men in long Matrix/Jesuit black coats. *eyebrow wiggle*

Daang, hoping this gets screened in theatres in China. I'll wade through having to read Chinese subtitles, understanding only half of it, cuz this looks cool.

LOL I haven't seen that term 'sausage fest' around db in a while :D