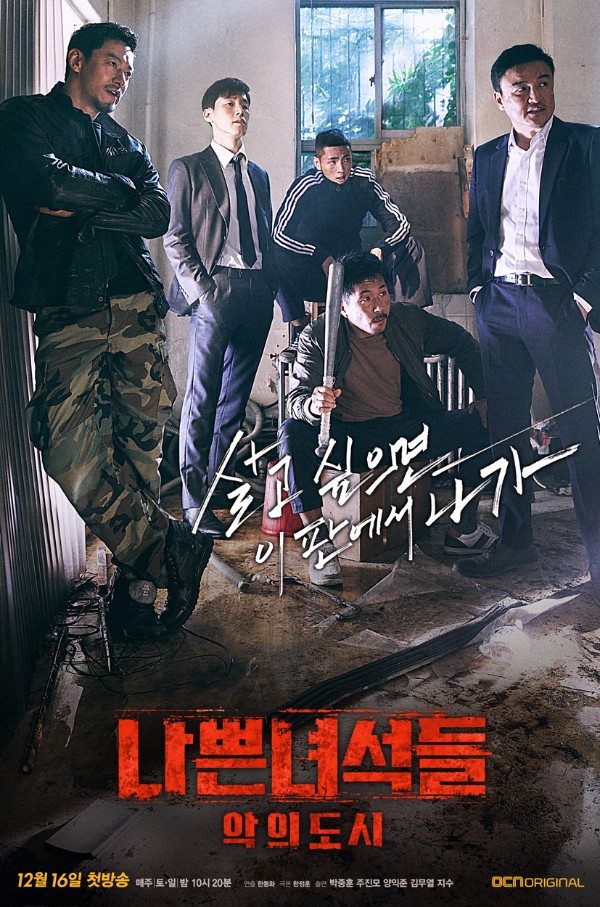 Woot woot—only a month left to go! Character and group posters have been released for the OCN’s spinoff series Bad Guys: City of Evil. The one above shows our formidable team posing threateningly, while the caption says: “If you want to live, leave!” The main premise of this drama is the same as the original: a partnership between law enforcement and criminals forms in order to catch even worse baddies. However, we do have an exciting new cast of characters, and since I loved the original season, my fingers are crossed that this one will be just as successful!

On the police force front, Park Joong-hoon (My Dear Desperado) heads the team, with Kim Mu-yeol (My Beautiful Bride) as his geeenius rookie prosecutor and Yang Ik-joon (Mystery Queen) as his hotheaded impulsive detective. On Park Joong-hoon’s two character posters, he threatens “Don’t be lenient in any situation. Just beat and catch them all!” But it looks like Kim Mu-yeol might be the one having a bit of a situation. He seems like he’s between a rock and a hard place as he desperately pleads “I… don’t think I can run anymore. I have nowhere else to go.” Yang Ik-joon is his characteristic badass crazy self in his posters: “This bastard is for real. A real lunatic. He’s just living because he was born.”

Meanwhile our two main bad guys look tough—Joo Jin-mo (Woman With a Suitcase) plays a former good-for-nothing gangster who is supposed to have reformed his ways and works at a fish restaurant stall at the local market, and Ji-soo (Strong Woman Do Bong-soon) plays the innocent but willingly framed convict with only revenge on his mind. Joo Jin-mo says he’s reformed, but that steely glint in his eyes belies his statement as he faces down the threatening men who surround him: “I want to live as a good man, but the world won’t let me.”

To be honest, I’m most excited about Ji-soo’s return. My puppy looks the most manly I’ve seen him yet, and I’m looking forward to seeing him in a darker, more adult character (after playing lovable scamps in Angry Mom and Moon Lovers: Scarlet Heart: Ryeo). In his poster, Ji-soo scowls toward camera, warning, “Don’t try to stop me. Or you’ll get hurt.” 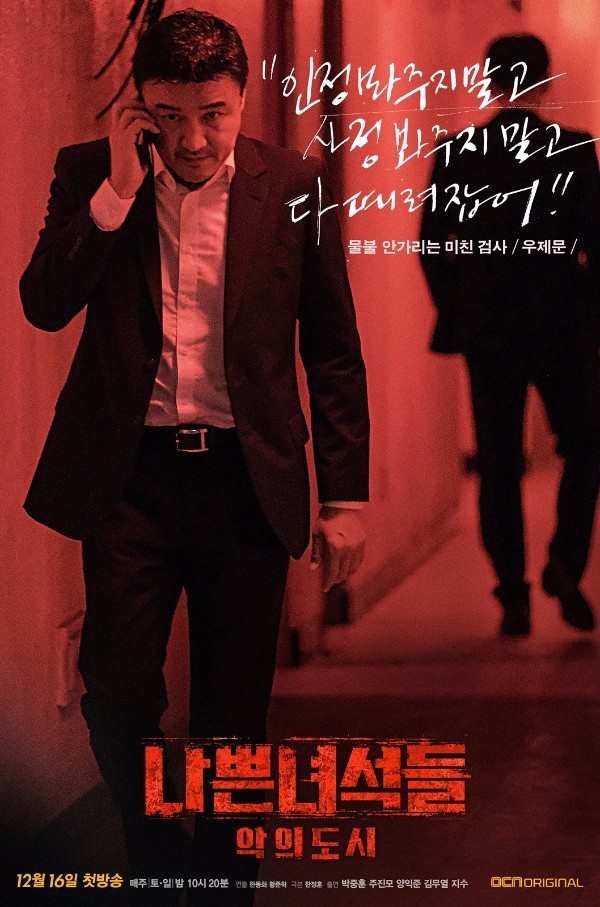 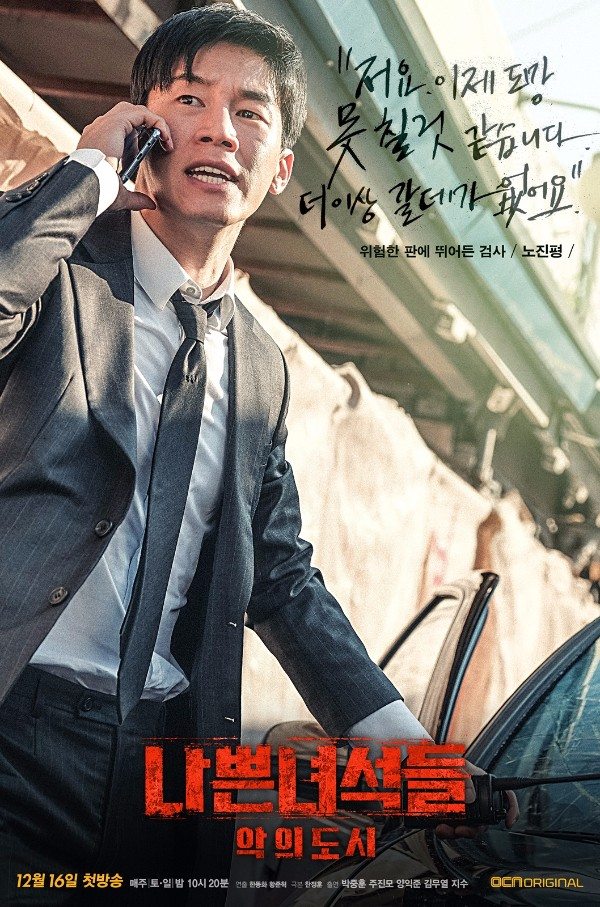 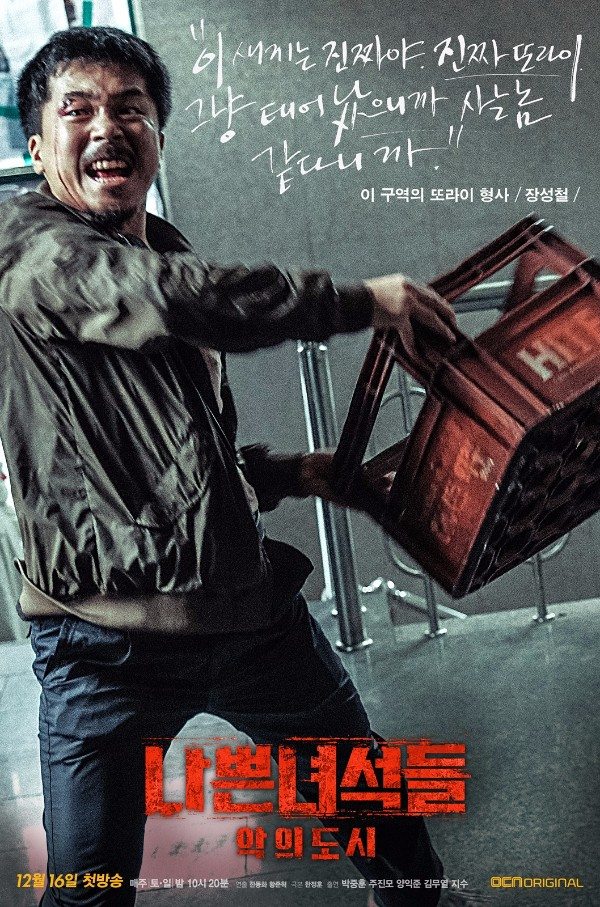 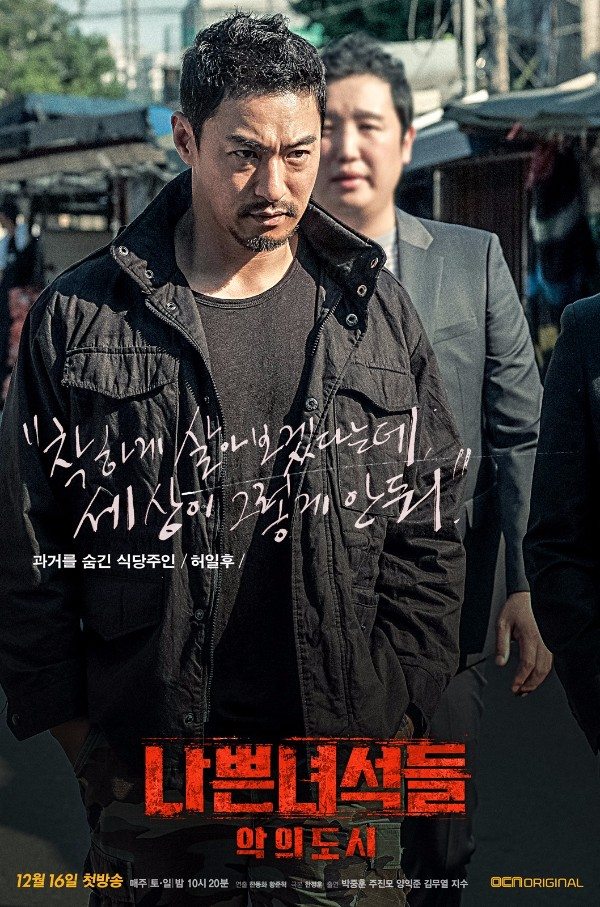 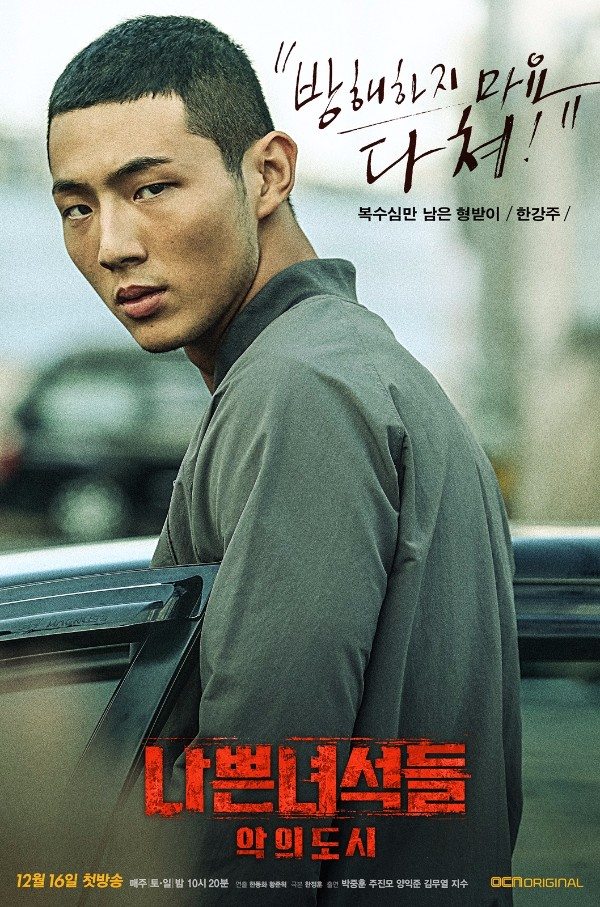 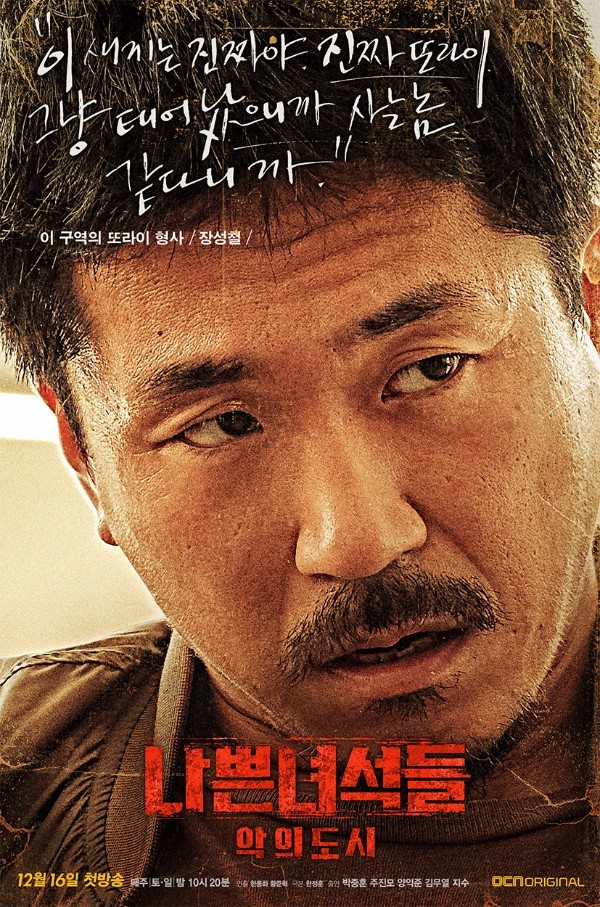 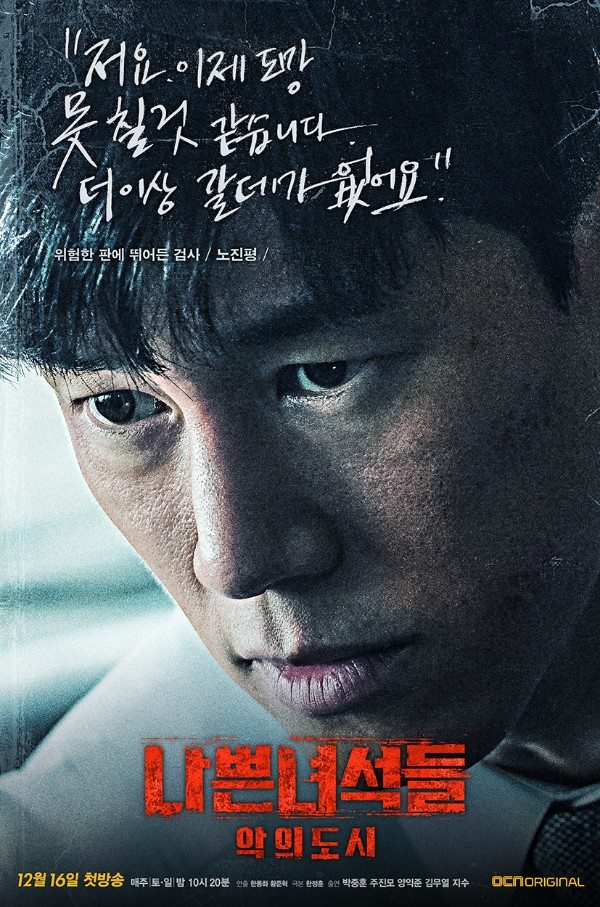 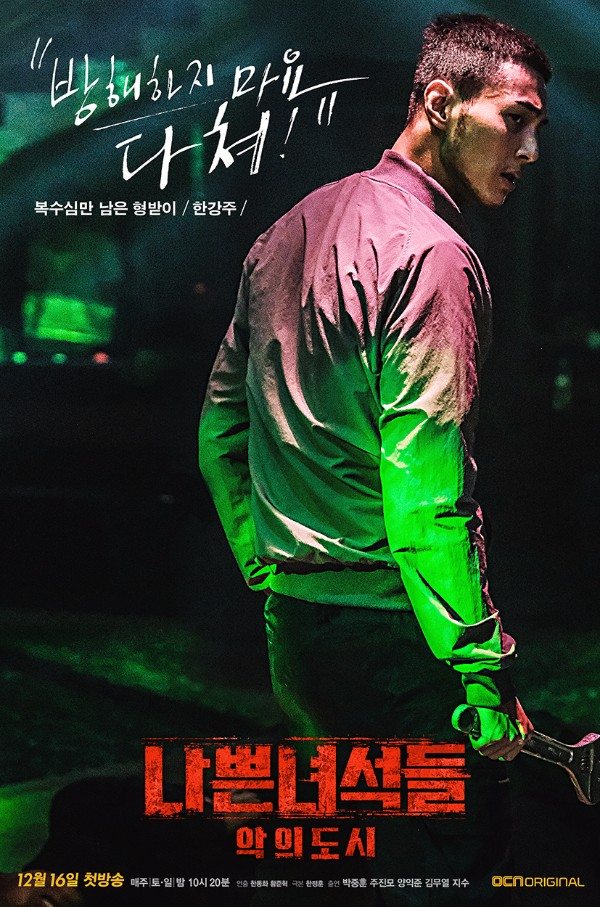 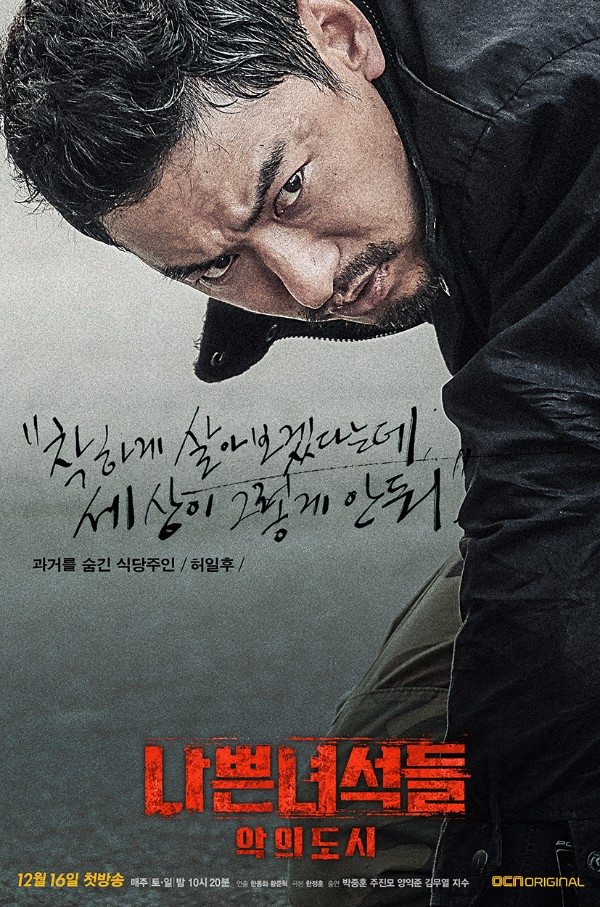 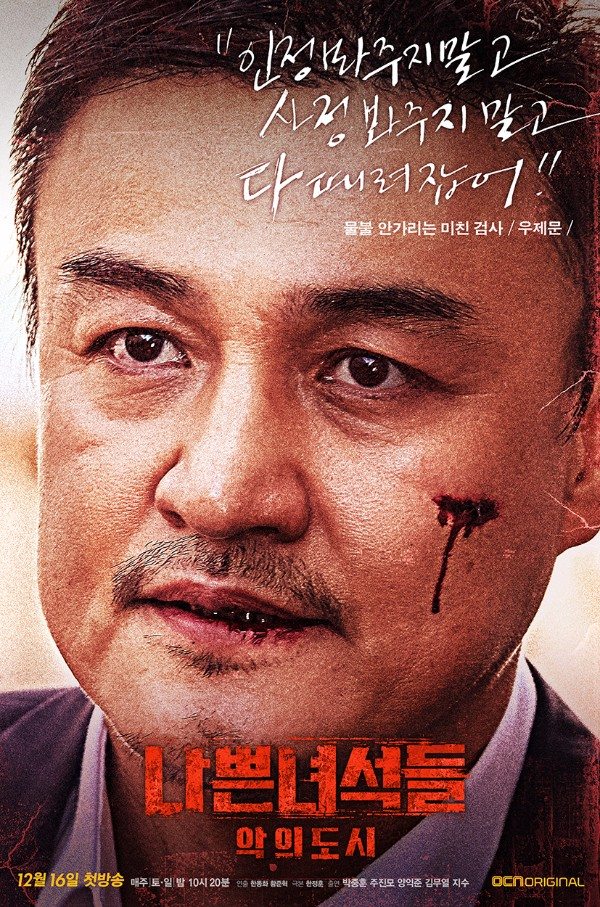 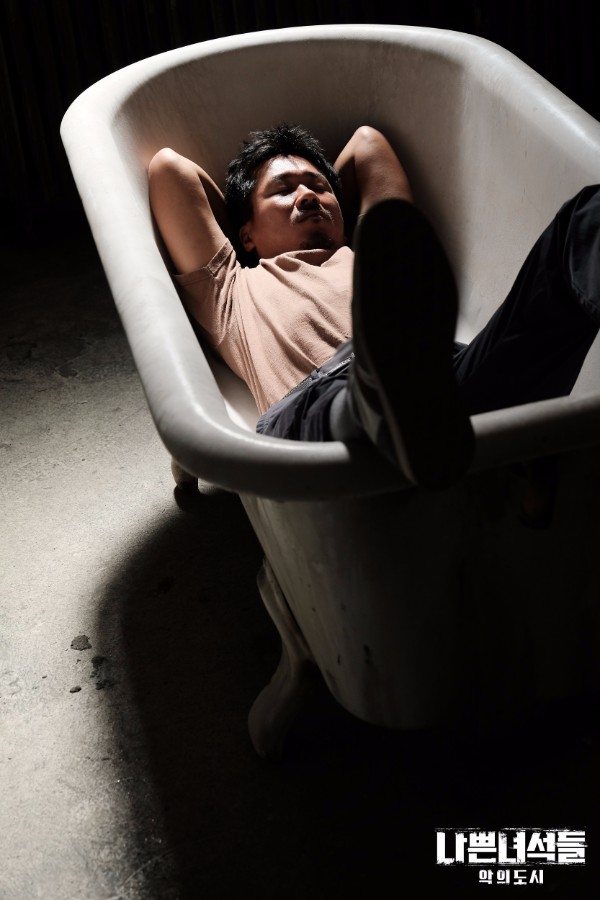 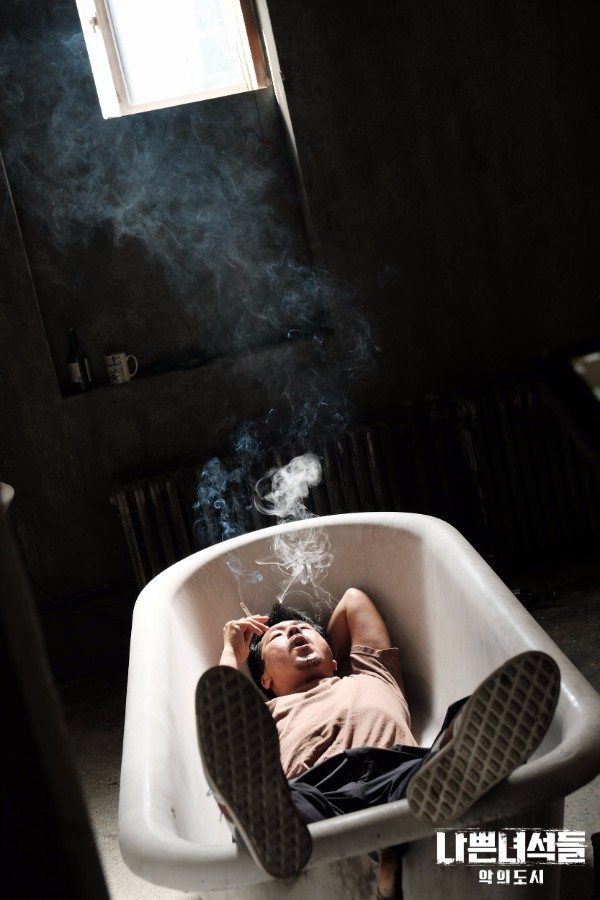 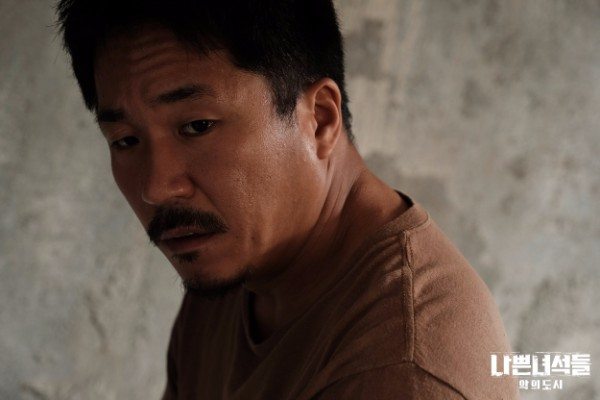 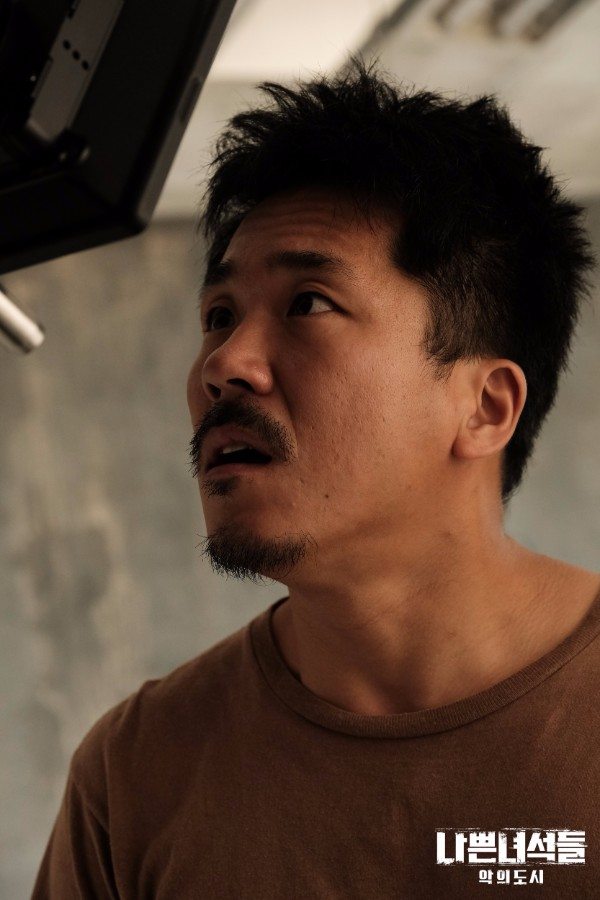 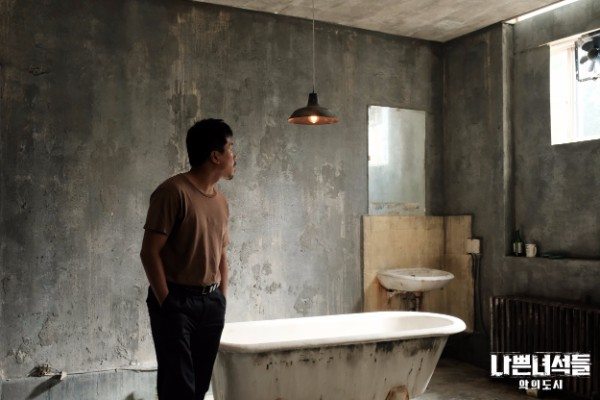 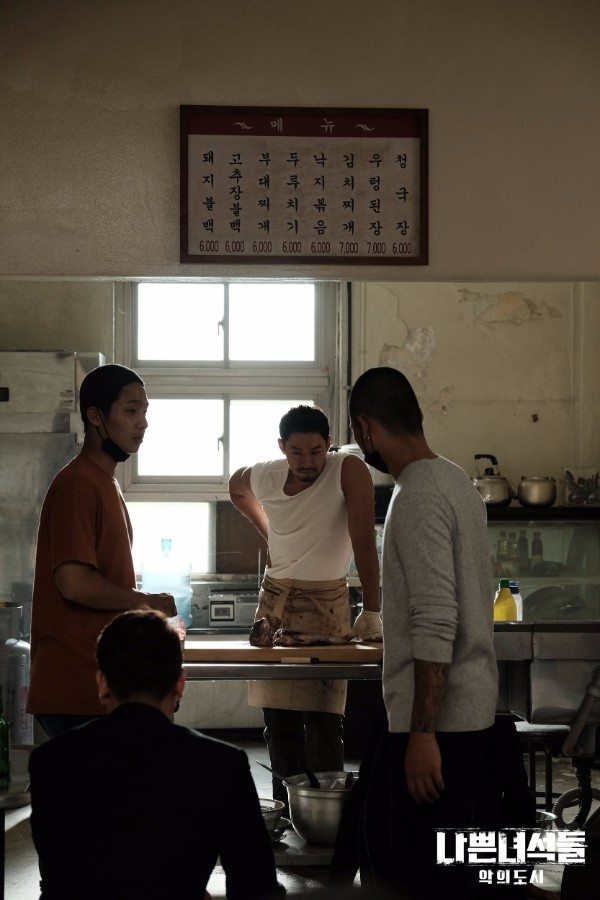 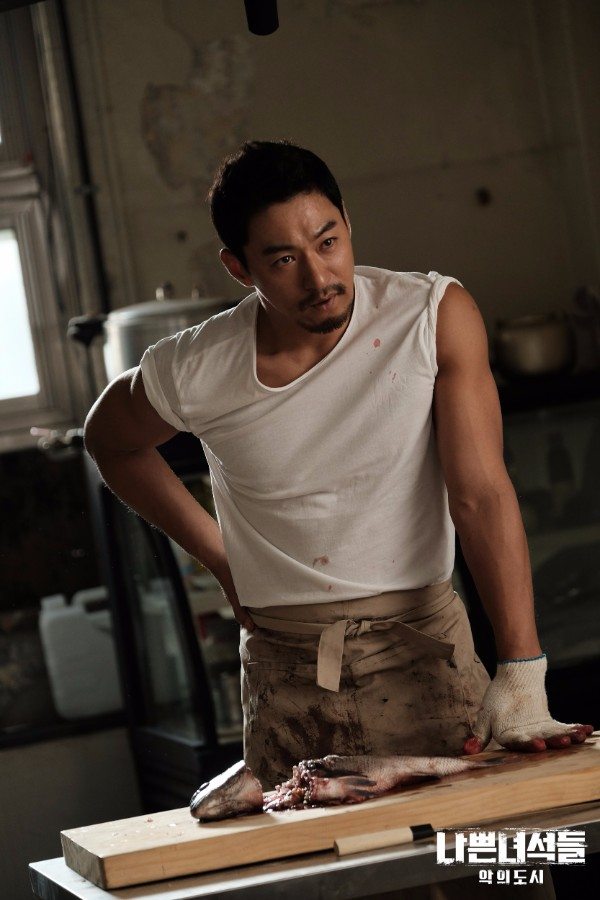 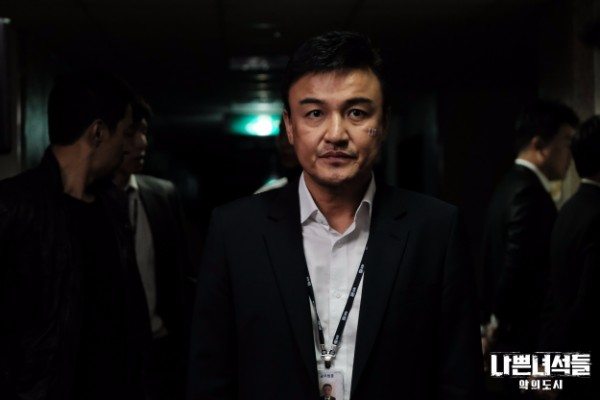 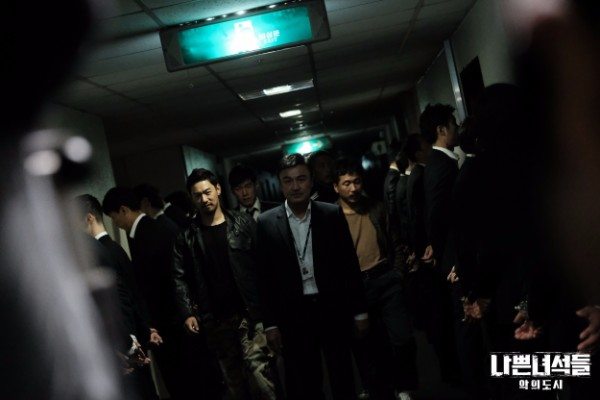 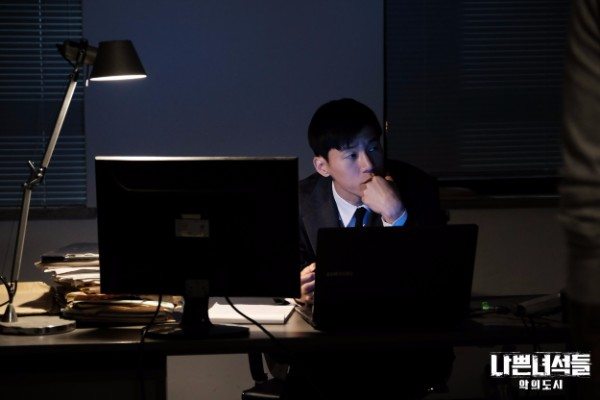 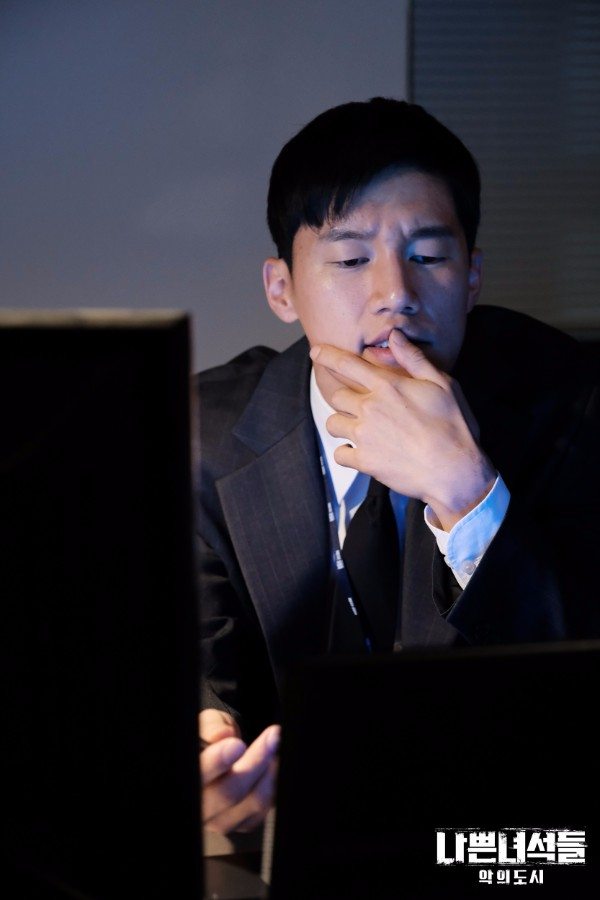 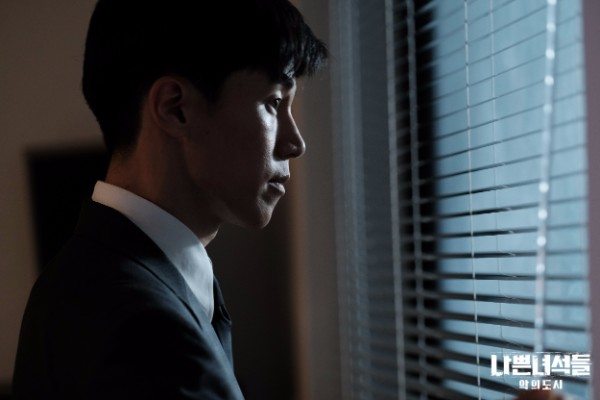 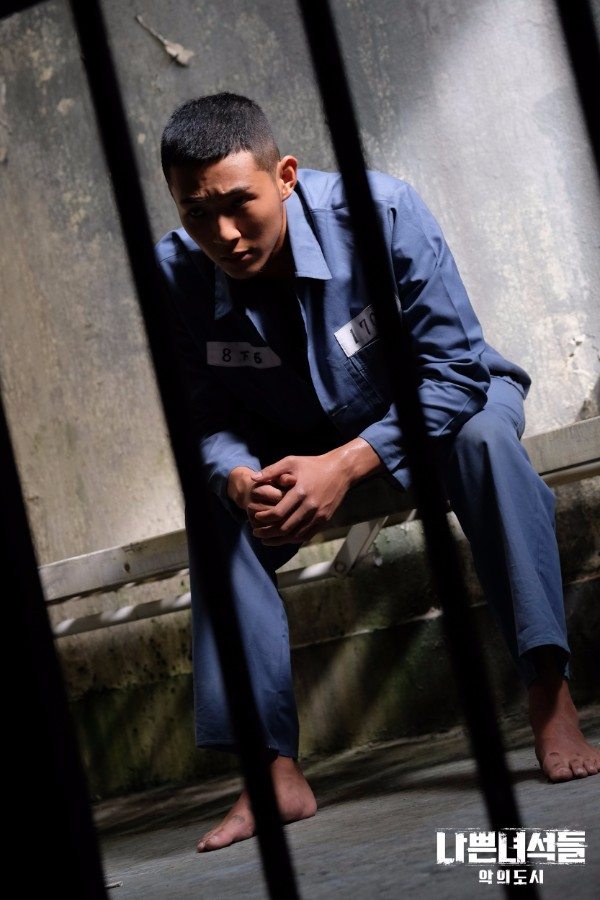 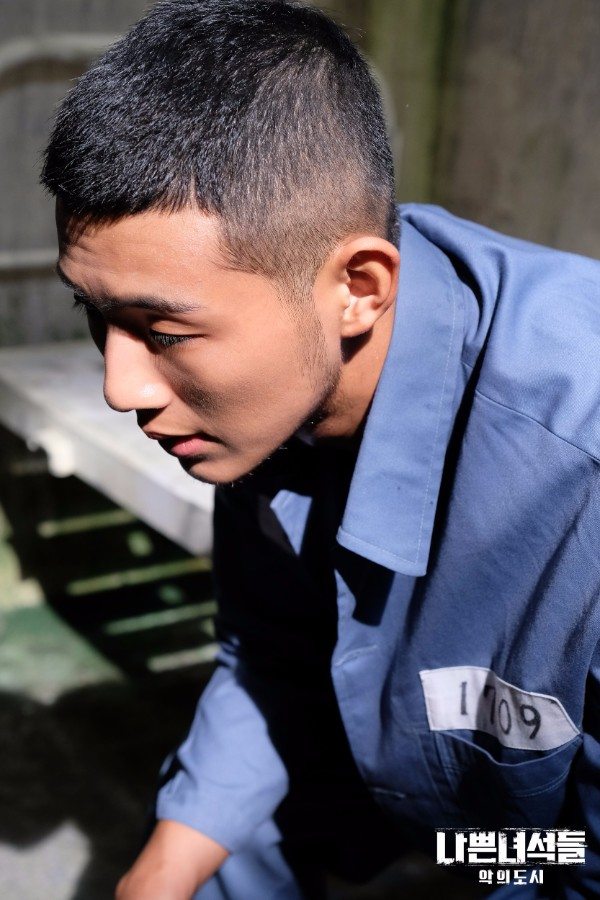 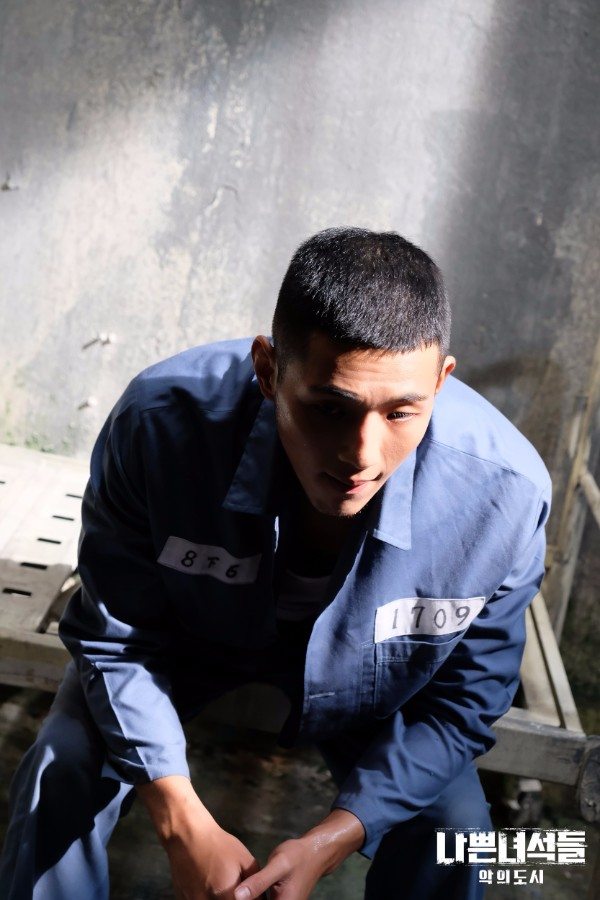 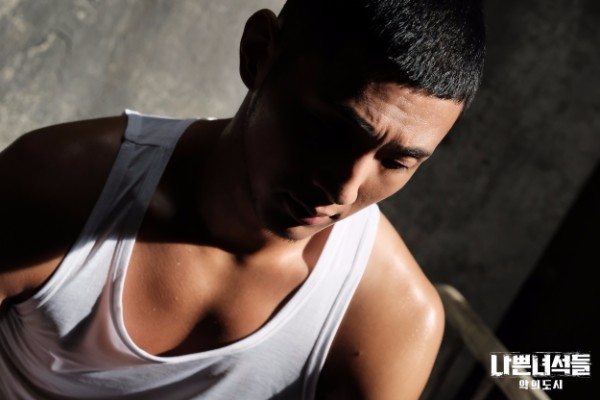 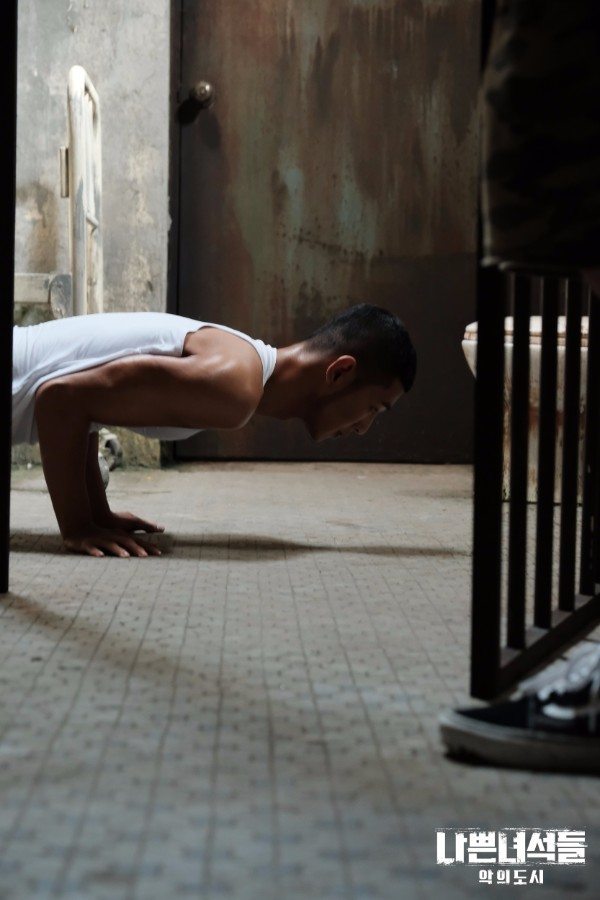 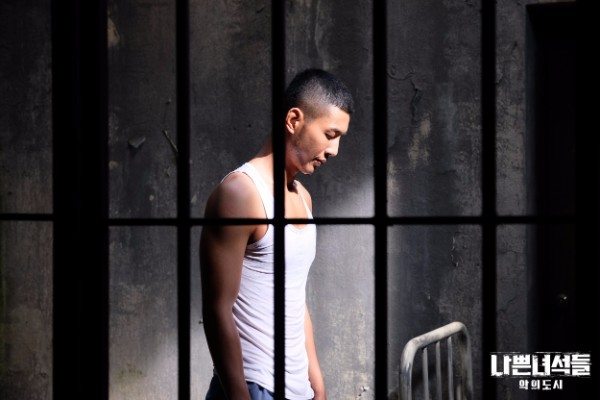 Whoa, Joo Jin-Mo is really doing something for me. I may need a moment.

Don't worry, I needed a moment too. *still fanning self

JI SOO! I'm so happy for him, I hope this drama is amazing for him and I know he'll kill this role. I hope this is just as good, if not better, than Bad Guys.

Please be evil. Please be evil.
Everybody that has seen season 1 should know that what we want is a show where everyone is evil and there are no angels 😂😂😂
If they give me some good bright guy I'll dump this drama 😅

Sooo true!!! I came to love Park Hae Jin in season 1 of Bad Guys!!! Season 1 is too damn awesome, they have to match or better yet, surpass that :D Ji Soo is so damn hot when he's like this :D :D :D

Thirst for badassery is real!
A Team is coming to make trouble in town! Bring it, bad guys!

I'm watching for Kim Mu-yeol. Have never been a fan of Ji Soo but I'll sure give him another chance with this one.

Same and thank goodness that this is not a sageuk. He was pretty forgettable in that one drama that shall not be named.
Maybe this will be the kind of genre that would bring out the best in him.
Park Joong-hoon and Yang Ik-joon especially are going to run this show. They are used to dark and gory crime thrillers and Kim Mu-yeol can pretty much carry one.

I'm excited! This cast has a lot more talents than the first.

something for everyone, love it! Dashing Joo Jin Mo, My Beautiful Banker and a very grown up looking Ji Soo!

How can I watch this in the U.K.??
I’ll pay to watch this. Which provider is carrying this for viewers living in the UK?

Let's hope Netflix will buy it. They're now airing Black, the drama preceding Bad Guys: City of Evil on OCN, so it's possible.

I can't wait for Jisoo in this either!! Been waiting forever for his new drama and this one looks good with his transformation!!

That would be Joo Jinmo

Oh ! I LOVE the group poster ! Looking so badass !

I'm ready, I'm soooo ready for this :XD
When is December?

Ji Soo really wants to grow those sideburns out. Atleast it works in this though. Little puppy is looking all grown up.

My Beautiful Banker..........back as a beautiful prosecutor......I have no doubt about your supreme bad-ass nature on screen so bring it on....please show, don't suck, I loved the first iteration of this show

My mouth just dropped open wide for Ji Soo. I had no idea he was in this, and I was just wondering who the badass in the tracksuit, must be another young hotshot actor on the rise. And woah, mindblown!

Surprisingly, I enjoyed Bad Guys. (I have a soft spot for Park Hae Jin ever since Seoyoung, My Daughter. I was infatuated.) I wasn't that excited for Season 2 with the new cast but the individual and group posters are compelling. I'm especially drawn towards Ji Soo and Joo Jin Mo.

I hope it can be as wonderful as the first season.
Personally, I'm looking forward to Yang Ik-Joon's acting. I knew him for the first time in It's Okay That's Love as Jo In-sung's older brother, and his acting there was impressive.

Wow.. Ji soo eyes has the same intensity as jin mo's.. The looks that make your heart stop beating😍😍😍i can't handle it🤣🤣🤣🤣

I know that this drama is called bad "guys" but doesn't it stand for both genders? I would like to see some "bad women" too…