The courthouse romance begins in Nothing to Lose promos 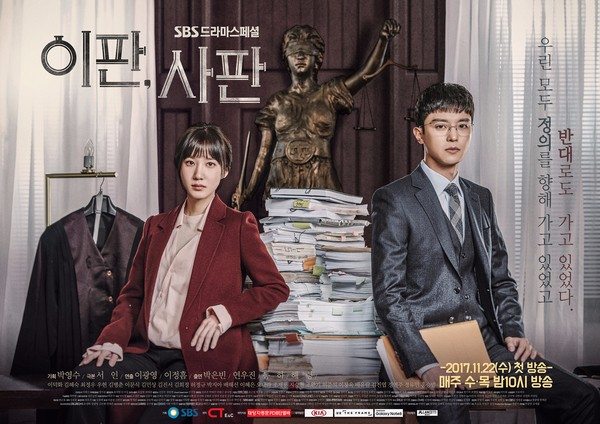 Upcoming legal romance Nothing to Lose is just about ready to air, and in this teaser, we see the first meeting between the leads, an impulsive young woman who begins her career as a judge in order to discover the truth of her brother’s secret, who happens to lack book smarts, and the intelligent, principled judge who rejected using the power of his background to get to his position.

Park Eun-bin (Age of Youth 2) plays the judge who is so hot-headed that she throws off her robes in the middle of a trial because of her frustration at the criminal defendant. In the teaser, she runs into a door that Yeon Woo-jin (Seven Day Queen), the cool-headed judge, was opening. Perhaps the incident leaves her flustered, because when he takes her pulse later, he remarks that her heart is still beating very fast.

There’s a moment of embarrassment when he flings his robe back and she blurts out that he shouldn’t wear them that way, and he brushes her bangs aside saying that she’s the one wearing his robes.

She regrets her impulsive actions when she threw off her robes during the trial, and swears (sarcastically) that if she ever does that again, she’s his woman. Later in the library, he asks, “Did you mean that, about being my woman…?” But she just holds up a USB and says, “This is the beginning.”

Posters are also out, and in the one above, the copy reads: “We were all heading toward justice, but going the opposite way.” I refer the four-person poster below, which shows the central love quadrangle and says, “A survival drama in the turbulent courts of corrupt law officials.” Below that, we have the core cast of characters with Lee Deok-hwa (Suspicious Partner) at the defendant’s bench and Kim Hae-sook (Father Is Strange) in the chief judge’s seat. The caption says, “Two trials, one case.”

In some of stills below, we have Dongha (Suspicious Partner), who plays the “Mad Dog” from the Seoul Provincial Prosecutors’ Office’s violent crimes division. Similar to Yeon Woo-jin’s character, Dongha was also born into privilege. He’s cute and full of aegyo to the woman he loves, a good son to his mother, and a warm support for his friends, but in front of murderers he’s as harsh as a grim reaper, and in the courtroom, he’s strict and sharp about his work. Oooh, I’m digging this love triangle already.

Very excited for Nothing to Lose—this Wednesday-Thursday SBS drama will air starting this week on November 22, in While You Were Sleeping’s former time slot. 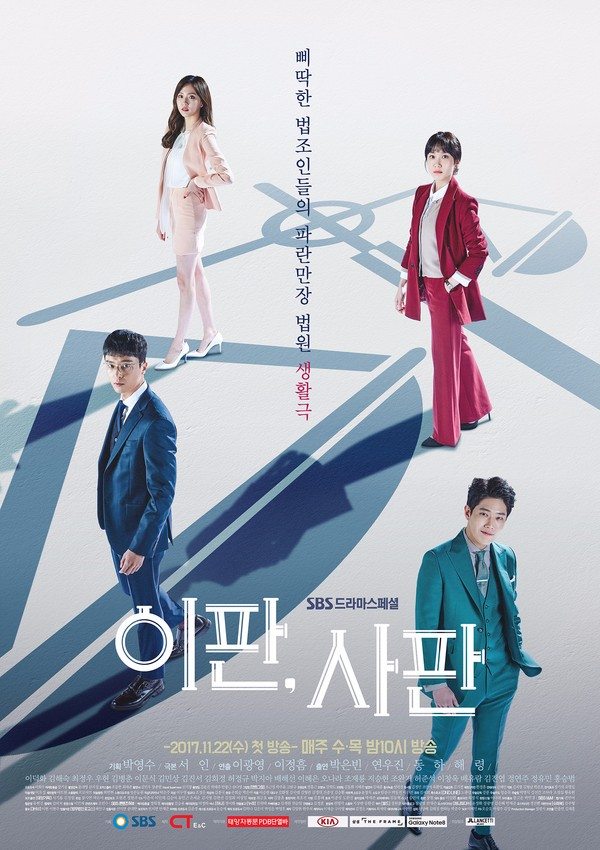 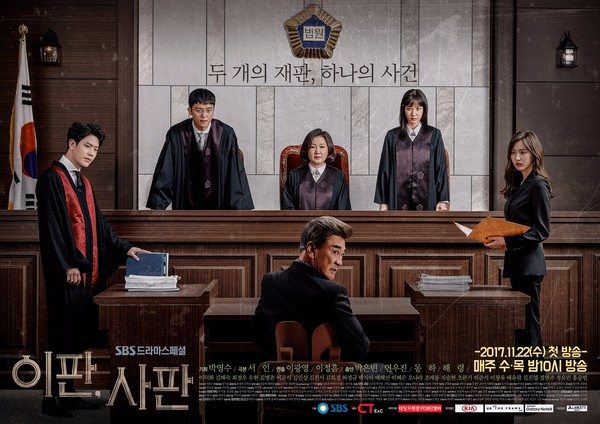 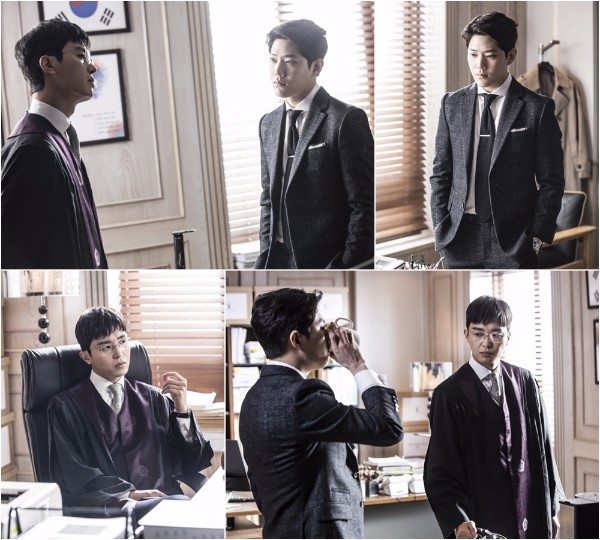 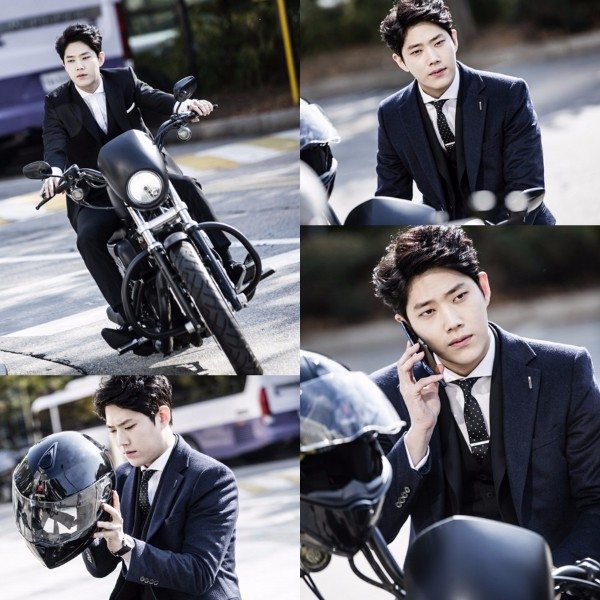 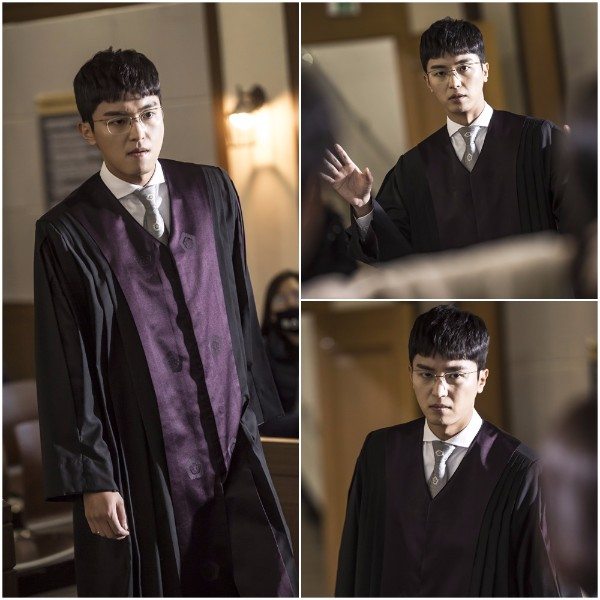 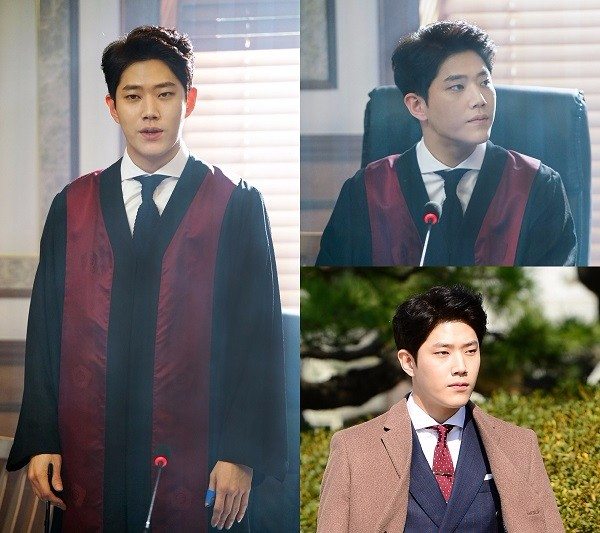 I think I will not caring about the justice part but just enjoy PEB and YWJ on my screen.

Looks like we will have another Ma Yi Deum in court.

Yep, looks like Dongha did the right thing in rejecting the robot rom-com. This seems like a more challenging and exciting role for him (from aegyo to strict and smart).

That robot romcom will kick this drama's ass!

I'm loving this recent spew of law dramas coming out it's one of my fav genres~ :D

Yeon Woo-jin working with another AOY star. Hope this one is better than Introverted Boss. I apologize in advance to those who did like that show.

I need a pulse check. For some reason- this might the drama I am most excited over this year.

It is a legal drama. I love the actors... not just the leads. I am so relieved like you can't believe that both leads are actors who can act rather than me trying to figure out what the hell they are doing.

Please, please don't spoil it with bad writing or directing.

On the other hand I do like the cast that much I could probably press the mute button and watch it.

I'd get pulse check too, if the one doing it is Yeon Woo Jin XD

So many Mad/Crazy Dog running around, am confused ><

'Dongha (Suspicious Partner) ... Dongha was also born into privilege. He’s cute and full of aegyo to the woman he loves, a good son to his mother, and a warm support for his friends..."

NOT BUYING THIS. He scares me in Suspicious Partner. Don't tell me the serial killer has turned a new leaf. I'd rather go to jail without a hearing if he's my judge. He's a serial killer through and through.

Age of Youth 2, Father is Strange, Seven Day Queen, and Suspicious Partner have ended a few months ago but it felt like a year ago! I missed these actors so much!

Plus I'm a PEB fan afterAge of Youth ♥

can judges in Korea really be that young? I thought one has to get some experience before becoming a judge...

This drama will do poorly in ratings. I can already see it at the bottom of the lot. Why keep casting Yeon Woo Jin when he has no star power? They should have cast Yoo Seung Ho for this, the boy brings in big ratings.

Yes, he might not popular as other actors, but did you watch his previous dramas before?? I just discovered him through Queen for Seven Days and because of his outstanding performance in that drama makes me become his fan. And after the drama finished, I'm watching his other previous dramas. He is an amazing actor. Yeah, I'm excited for I'm Not A Robot too but we'll see how both dramas will do in their rating

Now, this is how unfair justice in the world.... I really don't know, but that YSH guy is not even an eye candy, he can act, but he needs more training..... YSH should make a drama in KBS to make him more worth it...
YWJ may not be that popular, BUT his acting is a top notch, world class....... QUEEN FOR SEVEN DAYS is a top notch acting of of YWJ..... I became a fan of him as well, bcoz he is a pure talent.... Unlike, YSH who sometimes picks some cheap gimmicks....
Such a cruel world, right?... LOL.... even in drama land...

But SOMETHING must have worked out for Yoo Seung Ho, because he started out as a child actor with 9 YEARS more acting experience than Yeon Woo Jin.... So feel free to think what you think if you feel that the extra 9 years of extra acting experience is some sort of "cheap gimmick"

You know, even with a combined star power of Lee Jong-suk & Suzy, together with a star writer, While You Were Sleeping wasn't even a hit (in the context of this year's hit, we might expected them to reach 15%). There's no guarantee star power can bring high rating. People watch what they want, and it doesn't really matter who the casts.

Well, I can't wait to see you eat your own words, if this drama does well in rating later. 😉

LJS is not at the same level as YSH whose last drama did well in ratings and CPI despite a no name writer and PD. Don't compare oranges and apples. Nothing to Lose has nothing going for it unlike YSH's new drama which is oozing with chemistry.

Looks like someone here is an avid yoo seung ho fan who has a grudge against this drama particularly yeon woo jin. Even making multiple accounts to make replies lol how desperate can you be.
P.s. ratings is equal to popularity but not acting expertise and I prefer to watch a drama whose actors are topnotch in acting rather than someone who is just good and famous

I always welcome to an anti-heroine in dramaland..

Their acting is so on point and i like it so much. two solid actor. I really hope it will be their breaking point as an actor to land them even in a more bigger challenge... Might be I hope too much.

Kinda digging how well dressed everyone is, despite not being chaebols. Yesssssss

I was kinda 'eh' about this but after watching the trailer it actually seems like it would be really cute and fun and now I'm really anticipating it. Plus I love both these actors. Will definitely give this one a try.

Her comedic timing is GOLDEN.

the second lead looks handsome :)) he was in Suspicious Partner as the villain, wasn't he?

Dongha! Can I say I love him and can't wait to see him as a lead?!

I am just here for Dongha. Sorry, Yeon Woo Jin. 😂