[2017 Year in Review] Dramas that hit my soft spot 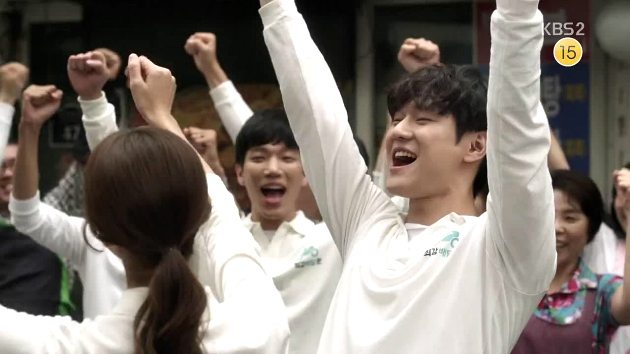 Every year we get a good mix of wonderful dramas, as well as many that didn’t quite match up to our expectations. The amazing ones earn a spot in our personal collection of Best Dramas Ever, while the letdowns we drop after a couple of episodes (or survive till the end and try to convince ourselves that it wasn’t a complete waste of time). Of the dramas I’ve watched this year, I feel that unfortunately, a larger proportion of them were letdowns, with only a few gems. Thankfully though, these gems were well spread out and lasted me through the year.

This year, out of all the genres, it was the slice-of-life dramas and some thrillers that really clicked with me. I’ve always been into thrillers and had found slice-of-life dramas to be rather boring in comparison before this. Nonetheless, the commonality between all the dramas I liked this year was how they hit my soft spot and got me thinking deep—whether it be about ethics, morals, the ugliness of mankind, or just simple human relationships.

My love for slice-of-life dramas began with Weightlifting Fairy Kim Bok-ju, which I started watching only because of Lee Sung-kyung and Nam Joo-hyuk. As a student myself, Bok-ju’s friendship with her little clique of swag girls really made me yearn for such friends and made me reflect on my friendships: How many of the people I call friends today will I still be on talking terms with in five, or ten years to come? Will there be any friends left at all? 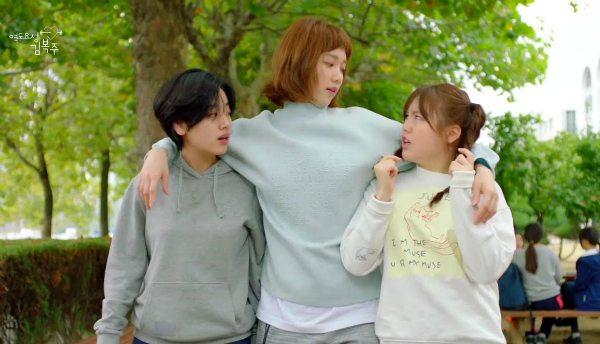 I’ve always been an awkward child around just about anybody, so watching Bok-ju do her crazy cello antics to be close to her crush really did ease my nerves, because I could relate it to some of my own terribly embarrassing situations.

Then came Strongest Deliveryman, which totally got me. I felt a mix of admiration and shock that a drama so critical of the economic system would be allowed to air, but I’m certainly glad it did. I felt the correlation between Hell Joseon affecting Korea and the system in my school, which I felt was also trying to exploit us, whereby the school flourishes at the expense of the broke students. I can’t imagine how it’ll be in a few years, having to chalk up a few hundred thousand just for a prized university education.

But Strongest Deliveryman really affirmed the idea that this world is packed with rich and greedy people. Just like how in Monopoly, it’s always easier (and more beneficial) to rob the poor, in this competitive world, we have a choice of being either the Ohsung corporation, or the soup store grandma. A choice between bullying and being bullied, and rarely do we get a chance to pull a Kang-soo and blaze our own path. 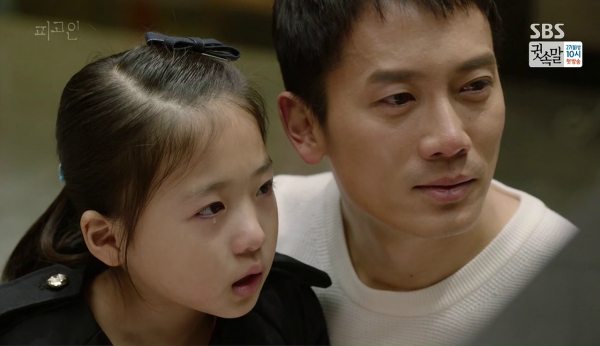 Lastly, for the thrillers, Circle and Duel did a good job raising questions on how humans often use science for their own greedy purposes, and tackled the question of identity, but what I really loved this year was Defendant. Defendant really showed a parent’s love—sacrificial and almost without limits. Props to Ji Sung for his amazing performance, which made it terribly heart-wrenching to watch him give his all to save his daughter.

And even the antagonist of the story portrayed his love for his son till the end. No matter how evil, how terrible Min-ho was, underneath his thick layers of cunning was a heart that truly loved his son and was willing to give up everything he worked so hard for to protect him. Personally, my parents aren’t very outward with their love for me, and I also don’t open myself up to them, so on some emo occasions I’d feel unloved. But extreme circumstances like the ones in Defendant made me realize that if I were Ha-yeon, I’m confident that my parents would have done as Jung-woo did, and that would be the strongest expression of their love there could be.

In my year of drama watching, there have been a couple of good dramas, which regardless of genre, have come to touch my heart and opened my mind to personal reflections. I may not have watched as widely as other beanies, but I’m sure that we’ve all had similar experiences with dramas that have hit our soft spots.

Defendant and WFKBJ really hit the spot for me too.
Unfortunately Strongest Deliveryman failed, but I saw a ton of other slice of lifes ☺☺

From the ones you watched the only one I saw was Strongest Deliveryman and I really enjoyed it for the most part! It was interesting to see the commentary on the economic society and I will never forget the scene when Go Kyung Pyo's character sat in the rain and was showing his heart to that whole company but yet that wasn't enough to move anyone's compassion. It was a heartwarming drama overall for sure though.

*or more like kneeling in the rain, poor guy def was not sitting :/

Yes, it was tough sometimes to watch. Because he was sooo good, but most people so really evil, indifferent or seeking their own interest.
The restaurant owners only helped him when things seemed to be right, but not when problems arose.
I know they wanted to make a contrast (the writers, producers, etc), but even when I know myself most people in the system are at least for sure totally indifferent for anybody else's affairs, still, in the drama this contrast was tooo much marked..I feel like it would or could have been better if at least KS would have had somebody else apart from Dan ah and his minions on his side, I mean, somebody adult, like the restaurant owners... But they really disappointed me as characters. 😑

come to think of it, you’re really right! the restaurant owners (minus grandma) and even part of his gang who went to work for Ohsung, were indeed a little far fetched characters. It’s hard to have so many people who have close to 0 loyalty, even to a friend of many years

Thank you so much for this beautiful contribution. I could relate to you while reading it. I am also a little bit outcast sometimes, and my parents were... well, not exactly close. Made me feel unworthy... so I always had that fantasy of at least having a girls clang for me, and when I watched FWKBJ this friendship really made it for me!!! I was so happy. Strongest deliveryman (except when KS went away, being kind of noble idiotic) was pretty much my favorite drama of the year (at the time).
I didn't watch the csi-fi thrillers or defendant though. I like Ji Sung, I really do, I even cried with Entertainers and would watch it over again if I had the time, but I am a little bit reluctant when it comes to legal dramas and heavy content.
Nevertheless, your comments made me feel curious. Maybe I will watch it someday.

it’s really nice to know someone out there in a similar situation is able to relate to you bUT YEAH we could be the online version of bokjoo & friends & provide emotional/ moral support however best we can!!!!!!!

As a mom, a housewife, a wife and a daughter, Go Back Spouse is the only drama that can hit my soft spot for this year. I cried from epi 1 till the final.

jang nara's sentiment was/is regarding her mother's demise — is still my sentiment as i still miss my mom dearly to the point of crying by myself whenever i see her treasuring the moments with her mom.

watching it now! maybe it’ll suddenly exceed all above dramas in my “fav drama” rankings

Yes, more love for Strongest Deliveryman! I too, have a soft spot for that drama, and since I watched it when I wasn't in a good place, I very much related to Danah's despair and her awe of Kangsoo. He was unbelievably good and yet since his struggle is very much representative of the ordinary man's struggle in real life, he also felt real. The drama just made me feel more hopeful, just thinking that even if I never meet them, there are Kangsoos out there, and though a drama-perfect happy ending isn't guaranteed, trying to live well is still worth it. Aside from its hopeful tone, the characters and the resulting couples were lovable. Chae Soobin went from being an actress to watch out for to one of my top favorites. I know her character got a lot of flak for "devolving into love interest" or some other disparaging label like that--and I wholeheartedly disagree. Danah's character arc wasn't "strong independent woman becomes weak love interest woman." It was "emotionally distant woman learns to forge meaningful relationships with other people." Vulnerability takes a different brand of strength, and Danah's development was her finally learning how to open up, and depend on and believe in other people. Drama viewers appreciate that kind of arc on their heroes, so it's kind of insulting to see a heroine being demeaned for the same kind of arc.

that was a beautifully written paragraph, i am absolutely in awe, and can’t think straight enough to come up with a response 😲

Thanks for sharing your favourites @babybeast I loved Weightlifting Fairy and liked the ideas coming out from Strongest Deliveryman.

I've been into Korean dramas since I semi-retired at the beginning of the year. The dramas that hit my soft spot (aside from the ones you mentioned) would be The Liar and His Lover and, of course, Goblin. Lee Hyun Woo just hits the right spot when he looks longingly at Joy. Same goes for Goblin and his Bride.

Hi @babybeast. Thank you for you thoughts about the the 2017 drama season. I did not watch WFKBJ or Circle but I did watch Defendant, Duel and Strongest Deliveryman. All fine dramas. Defendant is my No. 1 drama of the year. It was the first drama I watched with Ji Sung and I was awed by his performance along with the rest of the cast. I still remember the scene between Ji Sung and Kim Min-suk at the end end of episode six. Wow. I was concerned that since the series aired so early in the year that JS's performance might be overlooked or forgotten but I don't think that is the case. Like you said this drama went into my collection of Best Dramas Ever. I could speak on the other dramas but you covered them very well. Good luck to you in the future.

WFKBJ was this year? I would totally have voted the hell out of it if it was in the polls!!

to be fair it was from the end of 2016 but it lasted to jan 2017 so i put it in!!!! (i feel really sad for dramas which occur across a year, bc they get easily forgotten and don’t seem to get much chance winning awards from either years)

Thank you for mentioning Defendant. It wasn't recapped on DB so I had no idea if it was good or why it drew the highest ratings this year. If as you say it is about a parent saving his child - that explains a lot.