Also known as My First Love, this fantasy rom-com tells the story of a man who can't forget his first love. When he meets with some strange circumstances and is able to travel ten years into the past, he is determined to confess to the girl and change the things he regrets.

Also known as My First Love, this fantasy rom-com tells the story of a man who can't forget his first love. When he meets with some strange circumstances and is able to travel ten years into the past, he is determined to confess to the girl and change the things he regrets. 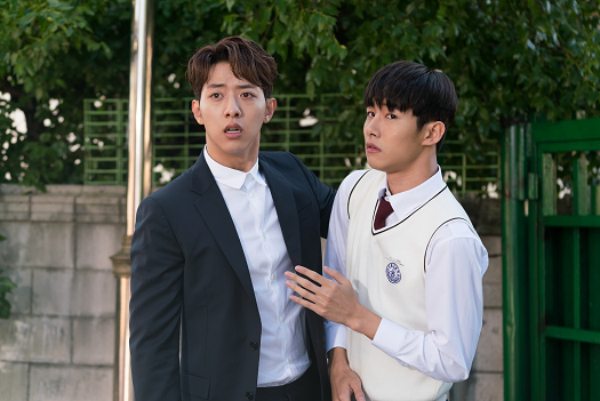 Reasons to watch: This is a short little web drama that got picked up by OCN to air in its newer Monday-Tuesday drama slot, and it looks like a fun coming-of-age story about first love that includes a supernatural twist. Lee Jung-shin stars as a math teacher who regrets not having confessed to his first love back in high school, and he gets a chance to travel back in time to do just that.

The trick is, he has to convince his past self (Seo Ji-hoon of School 2017 and Solomon’s Perjury) to believe in him and coach him on how to do this, and they end up in an unexpected love triangle with their crush, Lee Yeol-eum. I don’t expect it to be a very angsty kind of triangle, since it’s a heartwarming drama about the hero helping his younger self ultimately become a better man, but it sounds like there will be a lot of funny mishaps along the way. You can’t have two versions of one character and not have some adorable hijinks—even the very serious drama Nine cracked me up whenever they had Lee Jin-wook interacting with Park Hyung-shik in the past.

The drama premiered today, so if anyone’s already had a chance to check it out, let us know if it’s worth a watch!

Yes! That would be super helpful!!

It plays on dramafever if you have an account.

Reason to watch: Seo Ji-hoon. That’s all I need. But I’m happy to see the story sounds like a ton of fun! When I knew nothing about it, I thought it was going to be your typical high school love triangle with Ji-hoon as second lead. I still would have checked it out, but with less enthusiasm than I have now.

Already downloaded it, maybe will watch it a bit later today. I'm excited to see more Seo Ji-hoon around. With just 8 epi, it added more reason to watch.

Loved the first episode and our main guy(Future Shin Woo) and can't wait to see more...

Hope this doesn't go down The Best Hit route, which was mildly icky. Other than that, I'm looking forward to it.

Ooooh! This is why I love that you guys started doing these "Premiere Watch" posts because I had no clue this was even a thing.

I was staring at the girl for a while until I realized she's Yoo-ah from High School King of Savvy. Woah.

The concept of being in a love triangle with your past self is cute. I think I'll give it a try. And I'm curious to see how a romance from OCN turns out.

He's her teacher? But he goes back to the past after he's become a math teacher. Hmmmm

She likes him,ultimately she's falling for both of them,he wants to change his younger self past so he will have his happy ending so he isin't actively trying somehting with her younger self...

Ahh I see. Thanks for explaining!

He's not her teacher, I think. He's a math teacher in the future. But he goes back to coach his past self so his past self can have a chance with his past crush. It sounds like Marry Him If You Dare. (Oh god but I hope with a better story.)

Right? I was thinking maybe she starts liking him but he's only there to coach his past self. I never watched Marry Him If You Dare, because of everything I'd read about it, especially here on DB lol.

@mary LOL thank you. I make some smart decisions every now and then :D

are we still going to get a drama ratings post for last week?

There's something completely stupid in this series for starters: The girl is the same in both timelines while there are 2 actors for the same role. Logic OCN? Eitheer it's 2 actresses and 2 actors or 1 and 1 and that's it. Not a good thing to have hopes for romantic comedies... OCN just doesn't make any effort.

Just to clear up, this was originally planned to air at SBS Plus, but later got picked up by OCN, probably after the shooting was finished.

Hm it's likely a cost issue, they probably don't have the budget to do CG on either Seo Ji-hoon or Lee Jung-shin if they chose to only cast one of them. Did the male lead's friends also use the same actors in both timelines? If they did, then it's not that jarring of an issue for me.

I'd actually rather they keep the same actors unless they match the young and adult actors really well, such as in 20C Boy & Girl. With only 8 episodes, the show can't afford a Moon That Embraces the Sun-style whiplash from the transitions.

I don't understand. How is it stupid?
Maybe you've seen the first episode so it is as you say. But from the synopsis it says it's his 'highschool' first love. Of course a younger version of the main character will be shown. Now it depends on if the drama is still using the same actress for her adult version.

They used same actress for both timeline -younger and adult, so it does also looks weird to me. 😅

i guess they did it so people would not recognize him in his late 20's...even if we know we got that visual wall for how the other people see them

Seo ji hoon was not in school 2017, it was the other actor in Solomon's perjury called jang do yoon I think

Was he the guitar kid that Sa-rang used to have cute not-a-dates with?

I liked the first epi. It was pretty decent and fast-paced. Lee Jung-shin's character didn't take a long time to figure out things and on next epi onwards he will be helping his younger self and without realizing, involve himself in unintended love triangle. LOL. I do hope he will utilize his limited time to spend time with his late mother, although their relationship can't be son-mother this time, but as teacher-parents. My heart, when his mother was the first one one he met when he went back to 2007 😥(ugh this remind me of Go Back Couple 😥).

However, it's strange how there are two different actors for both timelines, but same actress for female leads. Maybe they had low budget to cast another actress, who knows.

Acting-wise, Lee Jung-shin and Seo Ji-hoon are doing well (Seo Ji-hoon is swoony though), but I wish the female lead has more emotions on her expressions. I think I'll keep following this drama, I found first epi of this drama was better than Meloholic first epi which was kinda.. WTF 😅

Yes, I think so too.

So it's a love triangle, but it's not really a love triangle because you're competing with yourself? (That sounds a lot like Healer doesn't it? hahahahaha) I'M IN!

Looks like Operation Proposal kinda thingy with a dark underbelly (fate! People die!), but when the past kicked in it got pretty entertaining. So Ji-hoon looks promising and his bickering with Lee Jung-shin is already hilarious. Lee Yeol-eum is cute as always, though her character is awfully vague at this point, which is somewhat typical of dramas with similar plot line, where he pursues his love and she kinda stays "pursued" throughout. I hope its not the case with this one. Lee Jung-shin is rather green still, but to my surprise, he makes one hell of a teacher. Bossing around his friends and old classmates while knowing all their tricks and habits is just pure gold:)

Whew. I thought he'll romance her as her teacher but apparently he's just coaching his past self! Okay, it's not icky anymore. Hahaha!

I liked ep 1 a lot and can't wait to start ep 2. But once i started watching ep 2, i found it painful to finish.
The premise is quite interesting, but it's so painful seeing the older teacher thwart his younger teen self of teen love. Usurped all the romantic moments with the female lead.
And from an objective point of view, it does look so icky when he unknowingly speak wrong things (foot in mouth) and cause female lead to fall harder for him instead.
I hear him chastise his younger self under his breath, i find myself thinking his older self is equally clueless *slap forehead*

[In Defense of] Longing Heart and its sweet innocence

Until three weeks ago, “an OCN romantic comedy” was an oxymoron to me. “Stick to your guns OCN!” I thought, “give me more chilling criminal mystery drama crack, and let the professionals handle kisses and cuddles!”

I never expected “Longing Heart” to be the first drama I would enjoy in 2018.

Short, simple and earnest, it feels juvenile in the sweetest way. The plot is a straight-forward one: a 27-year-old guy (Kang Shin Woo) who could never forget his high school one-sided crush (Han Ji Soo) goes back 10 years in time and becomes a math teacher in his former high school class, determined to support his younger self in his love life. Cue to a love triangle between the younger him and the older him, as the girl crush is legitimately torn between these two guys (who are actually only one).

I love the sweet moments, when the older Shin Woo tries to be the wing-man of younger Shin Woo, much to his annoyance… only for the audience to discover that the Shin Woo from the original timeline was actually doing just fine in the wooing department.

I love also how older Shin Woo feels comfortable with his high school friends (who have become his students) who find their teacher clingy and embarrassing, for instance when he recommends his friends to pay attention to Sex Education (knowing that two of his friends would become pregnant during college and give up many of their dreams because of that).

In many ways, I understand why Ji Soo would fall in love with her math teacher rather than her fellow student: of course it is the same person, but at the same time older Shin Woo has gained experience, perspective and maturity which make him a better version of himself, just like myself have thankfully improved since my high school days.

But the show offers a simple and earnest answer to this dilemma: yes we make mistakes that we wouldn’t have made in later years and may regret dearly, but if we remain true to ourselves, listen to those who know and love us, accept the mistakes of our past, then eventually, we will walk the path meant for us and find happiness.

Or so I want to believe.