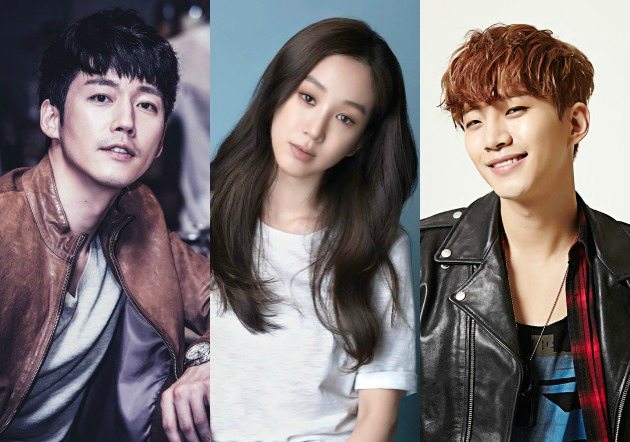 The writer of Jealousy Incarnate, Miss Korea, and Pasta is back! Writer Seo Sook-hyang, known for quirky romantic comedies and hilarious ensembles, is penning a new series for SBS called Greasy Melo (melo as in melodrama), and actors Jang Hyuk (Money Flower), Jung Ryeo-won (Witch’s Court), and Lee Junho (Just Between Lovers) have signed on to headline.

The series will take place in a Chinese restaurant, which I guess makes it the jajangmyun counterpart to Pasta. It’s about a chef who goes from being a star chef one day to the cook at a failing neighborhood Chinese restaurant the next, and will tell stories of love and survival through food. As expected from this writer, the world will be full of colorful characters:

Jung Ryeo-won has been cast to play a chaebol heiress whose name, Dan Sae-woo, means “sweet shrimp.” She lives a life of privilege and leisure—she accepted no gifts on her wedding day because her father gave her a check for 300 million won, and she enjoys horseback riding and fencing. Her greatest moment in life happens to coincide with a random bowl of jajangmyun, which leads her to undergo a big change and begin a new life.

Jang Hyuk will play a loan shark gangster who’s served his time in prison, and somehow ends up running a Chinese restaurant. He’s an intimidating character but he’s also overflowing with humanity, and we’ll get to see everything from action to romance to comedy in the role.

And as far as I can tell, Junho will play the main character, though I don’t know if he’ll be top-billed. He’ll play the talented chef once known as “Hands of Bond” who falls from stardom and ends up the head chef of the neighborhood Hungry Wok. What a name.

I’m expecting a cross between Strongest Deliveryman and Pasta, but the thing to really look forward to is this writer’s hilarious dialogue and inventive situational comedy. Jealousy Incarnate is still one of my favorite dramas of recent years, so I’m excited for whatever antics we get in this new workplace with this new ensemble. All three of these actors have proven their comedic chops (and obviously their dramatic chops too—that goes without saying), so the crazier the characters, the better!

Via Osen, IS Plus

This is gonna be so good.. hope its a restaurant success story

I haven't watched Jealousy Incarnate or Pasta (not a fan of GHJ, sorry) but I did love Miss Korea. And I love Jung Ryeo Won! I like Junho and Jang Hyuk, too, so triple win for me.

Junho was fantastic in JBL. Glad he picked something lighter and with another strong cast. Have to watch Miss Korea, couldn't continue with Jealousy Incarnate and found Pasta to be meh. But these three could definitely run away with even a mediocre script so really excited for this one! And the title makes me giggle, so lost in translation.

My heart is not at peace thinking that Jang Hyuk, the Jang Hyuk will be the second lead in a drama, but I'll still be around to take the first look. There must be a reason for him for accepting it. :/

ooooh, i like this - they could be brothers, they're both compact and dynamic...

I'm a super crazy fan of all three of these leads, yes!

SOoooooo excited because of the casting. Ever since JBL and Witch's Court, I've been wanting to watch Junho and Jung Ryeo Won in something else. And I've always like Jang Hyuk. Wasn't really into him for Fated to love you but maybe it's because I was never into the plot or his hair....AND Pasta used to be my favorite drama for the longest time.....Can't wait for May!!

Wow! I'm kinda surprised this articles got into The Most Commented Section. Tbh, I read this when it first released but haven't had the time to comment yet. 😅 It's fun to read all the comments here. I'm glad most beanies here recognized Junho as a talented actor. 😀😀 For his acting projects, I believe he always choose the good ones so whatever he's in, I'll be IN. 😁😁 I only has watched JI among the writer's works so far but I enjoyed it all the way through. Hopefully, this one will be as fun as JI.

I decided to watch this after reading the neighborhood named 'The Hungry Wok.'

Any drama that has Jang Hyuk in it is must watch for me. The most talented and consistent actor in Korea right now.

I like all three , hope the story does them justice.