[Dramas and Food] A moment marked by a meal

I swear, there is a way that K-drama directors will film food that makes it seem so much more appetizing than anything I am familiar with in America. It is for this reason I prepare a snack before hitting play on most dramas. But living where I do, my snack is often nothing like what I see our heroes and heroines enjoying onscreen, so it can sometimes feel like a disappointment in comparison.

Luckily, in university, and once I moved off-campus, I lived in the K-town corner of the city. So I had my pick of restaurants to fit the craving that a K-drama might give me. Sometimes, I would even gather the courage to try and cook up something after visiting the Korean market. 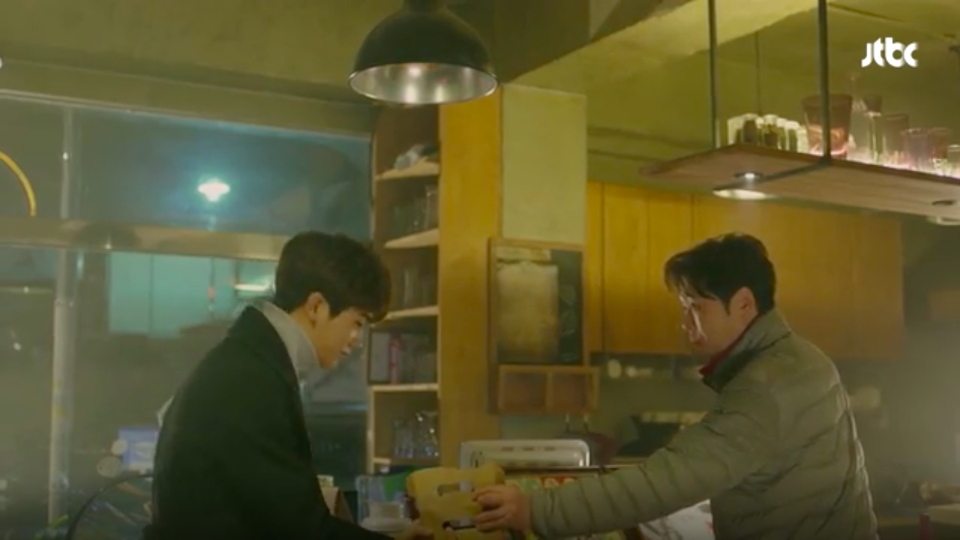 Many foods are tied to specific dramas for me now, and bring back happy memories of both the dramas themselves and my life at the time I watched it. Snacking on walnuts reminds me of Strong Woman Do Bong-soon, her father running the little shop, and walks along the river chatting with friends. Ramyun reminds me of coming home on late nights, and Yoon-jae teasing Joon-hee in Answer Me 1997. When I accidentally spill too much seasoning into the pan while I cook, I imagine early episodes of Running Man, and unlucky dice rolls in the “tea break” missions, and my roommate who stole pepper-shakers from the dining halls. Eating fried chicken somehow always reminds me of One More Happy Ending, and gossip sessions with the friend watching with me, because the characters reminded us of others in our social circle. 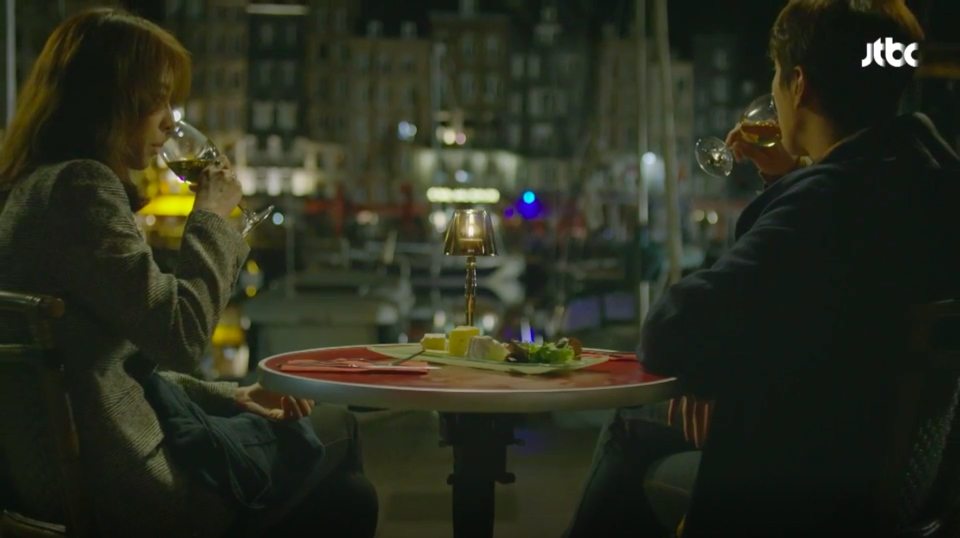 But there was a drama that I tie to a particular meal and memory, and I will probably remember forever. In The Package, French cuisine and wine are given the K-drama treatment, to surprising effect. It made me find myself working on the perfect omelette following a new episode the night before. Or preparing coq au vin for dinner. By the halfway point in the drama, I would watch while savoring a glass of the best wine I could afford on a college-student budget, because it just made the gorgeous setting of the drama seem a little closer.

When the drama came to an end, I was also approaching the end of my university career, and the goodbyes in the show mirrored the ones I was having in my life. So I was inspired to have a final dinner with the company of university friends, cook up some great food, and savor some of our remaining time before we go our separate ways. It was a wonderful time, the food bringing us all together. Maybe that is some of the magic behind K-drama’s food: Meals can bring people together, and somehow it is captured in something as simple as a pot of ramyun split between friends. 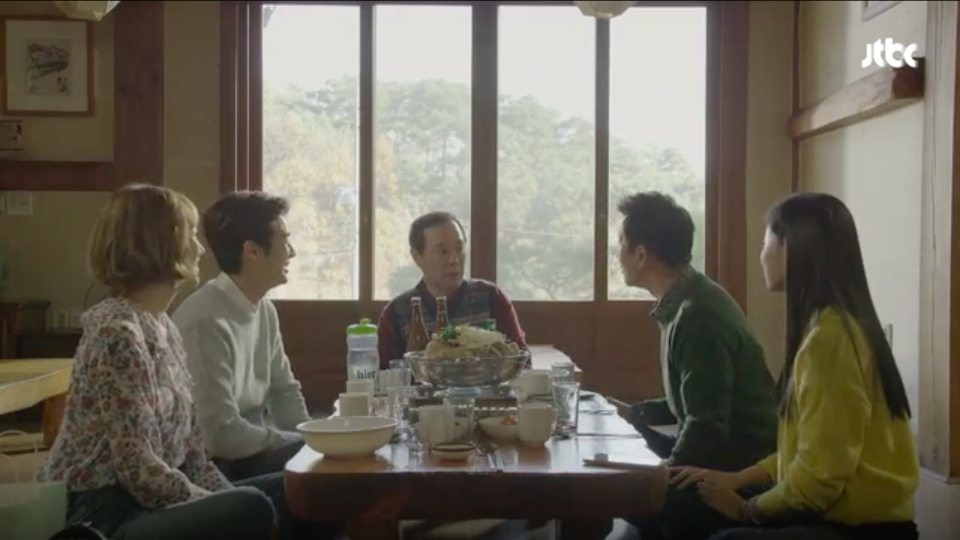 This inspires me to continue watching The Package. I somehow stopped watching it in the middle of nowhere.. thanks to you!

There were several good dramas when it aired, so I can understand how you may have stopped watching. But I definitely recommend finishing it, it was a very satisfying watch!

You should finish it, if only to enjoy France. But really, I enjoy it. Cute drama.

I haven’t seen The Package yet and it never really stood out to me as a must-watch, but this has me reconsidering that. On the List it goes!

Ramyun also always reminds me of Answer Me 1997! That show was also the first time I ever saw a drama character eating the uncooked noodles as a snack, with the seasoning packet sprinkled on it, and I remember being shocked when I learned that a friend of mine did the exact same thing. I thought it was just one of Shi-won’s quirks. 😂

The Package was a bit of a quiet drama, but I totally loved it. The characters are really well written and the setting was totally beautiful! The writing was great too, I felt involved in the story, laughed, teared up a bit, and was jealous of the food. When the drama ended I felt sad that it was over but was totally satisfied with the ending. It made it to my list of all-time favorites, to be honest.

Very true, The Package definitely became one of my favorites of 2017. It was an unexpected gem of a drama! Worth the watch!

Congrats on being published! I usually eat while watching dramas too 😄 They make food look so delicious 😋

That's cool that The Package inspired you to perfect a dish and also followed your own life transitions.
I've been eying The Package but have yet pressed play.
I started One More Happy Ending, a few eps, but haven't kept on for some reason. I like both the leads. Jang Nara was in the first drama I watched , think that's how I became aware of it. And like Jung Kyung-Ho. He is also gorgeous.

Impressed that you made coq que vin and hopefully had some red wine with it! I think I might have to watch The Package. I never realized it was a foodie’s show!

I do recommend the drama! It was a really pleasant watch, even when it made me feel as though I was starving! Just the right balance of laughter and emotional moments! Just make sure to have snacks at the ready, lol.

I started cooking quite early, at age seven. I was such a picky eater, my mom thought understanding the effort of making a meal would help give me perspective (it worked). So I have more experience in a kitchen than my age would suggest. It wasn't even my first time making coq au vin, but I did miss the gas range I made it on at home!

your mother is a parenting genius but even though I cook for myself every day and I'd still rather starve and be rude than eat something I don't like. I mean, I'm a cheap bastard so I hate wasting food but if I taste a silver of cumin or dill I'm done with the entire meal.

Yeah, I still have foods I don't love, but I do put in more effort to eat different things. I was partially justified in some of my pickiness though. I am lactose intolerant, but since it didn't run in my family, my parents brushed off my complaints after meals as being over-dramatic. To be fair though, I treated a meal with cheese the same as one with anything else I didn't like.

@rinny Meals can bring people together, and somehow it is captured in something as simple as a pot of ramyun split between friends. 🍜🍚

This happened in Avengers Social Club and the drama holds the title of being the ramyun king for me. The scenes were both appetizing and hilarious. Ramyun friends unite!

The scene where Hee Soo makes the seafood ramyum *drool*
I still vividly remember that scene...and it looked so incredibly appealing!! :)

Hee Soo's seafood ramyun goes down as the most appetizing ramyun ever (Jung Hye and Soo Gyum agree 😂) I don't even like seafood but that scene got me trying it out.

Thank you, @rinny!
I agree that those dramas which mirror my life at a certain time are all that much more special to me.
I'm impressed with your cooking skills! I hope that you have many more adventures with other cultures in food!!

Love your post and The package. I wish everyone happy eating and drama watching!

I love your story @rinny, especially as it related to your college days! I wasn't inspired to cook...but I did discover ramyun and realised it was HEAVENLY for lazy students who don't cook.

I was also inspired by Drinking Solo to go to cafes and restaurants by myself. I loved eating my Chinese buffets. It went well until some random guy decided to hit on me and sat down asking "where are your friends?" It was late at night and I kind of freaked out. *still angry over it*

Drinking Solo is in the middle of my to-watch list, mostly because I don't know what to expect from it (still haven't watched Let's Eat either). But I will occasionally go to my local coffee shop and grab a seat by the window because all the dog-walkers in the area go by!
I totally relate to how a dude can ruin a good time by being too forward. Asking about a possible safety net of friends is 100% reason to panic, it just is creepy!

I was out walking alone early in the morning and a guy came over asking for change. I didn't have any and he got a bit mad. The way he advanced then retreated then returned felt scary, even if in all it took 20 seconds. After I walked away I got so angry that he made me feel scared when I had only felt safe before. Really mad.

What are some of the memories food and dramas remind you of? I love that certain foods can remind me of so many great experiences.

Wow! Thanks for the post.
I'm actually a picky eater that I consider eating just because I have to and not because I want to. Most days, I just eat once or twice a day and it's rare that I have three meals a day. I seldom crave anything.
That was then until I saw how Seo Hyun Jin eat during Another Oh Hae Young days. I don't know why but during that time that I saw her eat, I suddenly had the urge to go to a Korean restaurant with my sister. I have loved Korean food ever since.

That food can evoke memories of time and place illustrates what an emotional impression it can make.