An innocent theatrical actress marries the king and becomes the queen of the Korean Empire. As she adjusts to life in the palace she realizes that nothing is as it seems. Her safety is constantly under threat as the back-stabbing, affairs, and secret alliances in the court come to light.

An innocent theatrical actress marries the king and becomes the queen of the Korean Empire. As she adjusts to life in the palace she realizes that nothing is as it seems. Her safety is constantly under threat as the back-stabbing, affairs, and secret alliances in the court come to light. 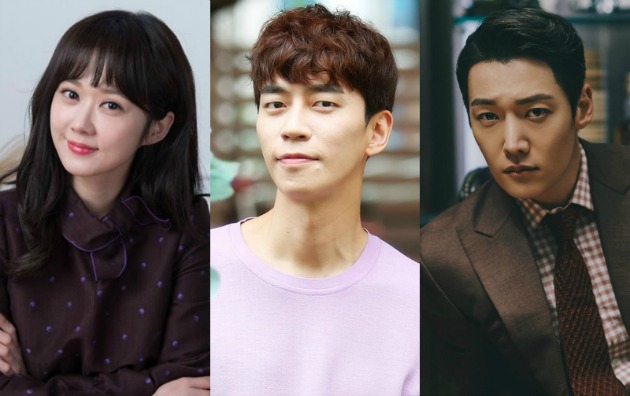 More casting news has been announced for SBS’s upcoming An Empress’s Dignity, which last month floated Sung Yuri as a possibility for one of the lead roles. Turns out Sung Yuri is out of the running for the project, but Jang Nara (Go Back Spouses) is now a contender for the leading role, although this isn’t a case where they were up for the same character.

An Empress’s Dignity is set in an alternate reality where South Korea is currently a constitutional monarchy. A bright and vivacious musical actress becomes an overnight Cinderella when she marries into the imperial family, and finds herself fighting against those in power in the palace. When the dowager empress is murdered, it sets off events that threaten the monarchy itself, and all the while, our heroine struggles to find true happiness and love.

Jang Nara is up to play the main character, the lively (and aptly named) musical actress Oh Sunny. She’d wanted to be a musical actress for the rest of her life, but never made it out of the nameless understudy stage, until one day she suddenly becomes the nation’s Cinderella. Sung Yuri had initially been offered the role of a legal representative to the monarchy, but she has since declined the project.

Shin Sung-rok (Return) has confirmed signing on to play the charismatic emperor Lee Hyuk, who is respected by the citizens for revitalizing the country’s economy. His pleasant outer appearance and eloquence belie an uglier underbelly, and his insides are “decayed with corruption,” which of course they are because you don’t cast Shin Sung-rok and not give him an ugly underbelly, which he will then make delicious. It’s just the rules of dramaland. I guess he has a romantic side, though, because he’s unable to forget the dead empress and misses her, despite his roving eye for women.

Choi Jin-hyuk (Tunnel) is in the mix to play a mysterious character who stands in the center of all the tumult and conflict. While his reps confirmed that he had been offered the drama, he has not yet made any decisions on it, although we’ll be able to see him soon when his upcoming drama Devilish Joy premieres next month.

Writing An Empress’s Dignity is Kim Soon-ok, who has proven herself a successful writer in the weekend-family-drama and the long-running-daily-drama space with shows like Jang Bori Is Here, My Daughter Geum Sa-wol, and Wife’s Temptation. Directing is PD Joo Dong-min of Return. The series is planning to premiere as a Wednesday-Thursday series on SBS beginning in November.

Via TV Report, My Daily, IS Plus

I’m a bit confused... So who is Jang Nara supposed to marry? Shin Sung Rok’s character?

The reports for this drama are so damn confusing. In any case, I actually prefer Jang Nara with Shin Sung-rok's character. It'll be cute to see him soften up to her. Plus, I didn't think Choi Jin-hyuk and her had a lot of chemistry in FTLY. Of course, it might just be that the snail couple was way too strong. I mean, seriously, JNR can generate chemistry with a statue.

I do not think JN has agreed to making the drama, as she didn't agree to doing the one about a blind woman, but still linked to it. Hope she takes one or the other, she normally takes on one drama a year so here hoping.

I really like the three actors up tp play in this drama.
So we have a murder mystery, cinderella romance and political machinations. Sounds interesting 😊

The cast almost made me tear up! I suppose Shin Sung Rok is playing the villain (again), but whatever! I'll be just happy to see him on my screen again.

I’m confused cause I don’t know if he’s a main lead or not?

I don't think he's the main lead. He's the corrupted emperor and it sounds like the murdered empress was his wife, but the title dowager empress is given to the mother of the emperor... So it's his mother who's killed? Never mind, I'm confused as well.

We still don't know who Jang Nara's character marries. Whoever it might be, I don't think Shin Sung Rok is the main lead. He's been taking villainous roles for a while now.

I'm just happy too and Shin Sung Rok shines as a villain though I hope we get a explanation about his role.

He does... But I suffer when he's the bad guy. I always want to root for him. Plus his Liar Game role left me with the impression that he's a hurt suffering puppy.
I'm just weird like that. :-D

He plays the villain role so brilliantly that i end up rooting for him.🤣
I want to watch Liar Game 2.
You're not weird and you're not alone.🤣

Haha, thanks!
I want to watch it too! My heart might break for our villain, but whatever.

I only know him as Daniel in Fated to Love You, lol. So this will be an interesting pairing. Though in that he was over shadowed, to me, by Jang Hyuk's performance.

I want to watch Emergency Couple because of that baby. Is it Baby Gook?

He was fantastic in Tunnel. If you have time, I would recommend checking that one out.

Emergency couple is good too. He is great in playing Lee Seung gi's father in drama Gu Gamily Book. Tunnel is one of my favorite drama of Choi Jin Hyuk. He plays the brother of Lee Min Ho in drama The Heirs.

Wouldn’t this be a reunion between Jang Nara and Choi Jin hyuk if they signed on? I hope this is a good thriller since I did enjoy return despite some setbacks

Ohh yeah!! It'll be reunion for them. I hope they accept. I badly want them to act in this drama coz the premise sounds interesting and they are brilliant actors.❤️

Happy that Jang Nara may be making a comeback! If she takes up the drama and it does well, she has a good chance of bagging an award at the SBS year end ceremony, given how lackluster SBS's dramas have been. I personally thought she was robbed last year. She gave an amazing performance in Go Back Couple. That said, I'm not exactly a fan of either male lead, and I'm not too big on the synopsis too. Still, I'll try anything she's in :)

She did an incredible job in Go Back Spouses!

Anyone knows if this PD is the same PD that got into a controversy with Go Hyun Jung in Return?

Its the same one which is why shin sung rok got cast.

what does that mean? because shin sung rok was in return

So where can I get a poster sized version of that picture of Choi Jin Hyuk.

Wow.
SIG in a script reading video and Jang Nara's possible casting! My IRY feels are so high on right now!

I am not sure abt the story line but if it's Jang Nara and Shin Sung Rok, I just will have to watch it! I like Choi Jin-Hyuk too and it would be a possible reunion oh him n Nara!

If they're going to infuse a darkness in it because of the murder, which supposedly sets things in motion, then it might actually work.

This sound sooooo exciting, the storyline and the casting, really hope Choi Jin Hyuk would consider!

Constitutional monarchy reminds me of Goong (princess Hours). i want a season two with original casts.

Love to watch dramas about King and queen, emperor and empress. So many exciting and surprising events in each episode.